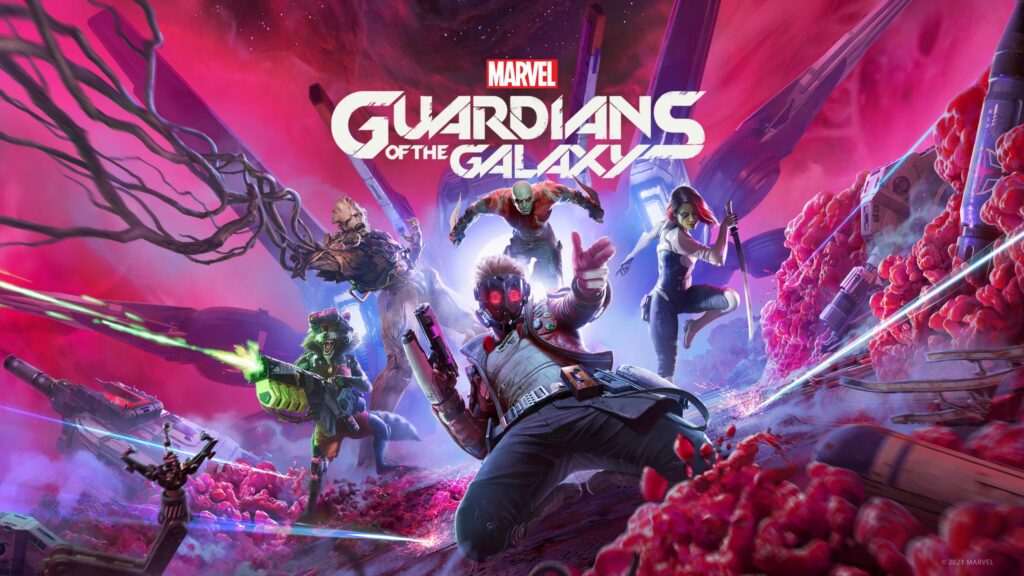 Marvel’s Guardians of the Galaxy – Review

Guardians of the Galaxy (GotG) is another instalment to the Marvel franchise of games, this time developed by Eidos-Montréal, and published by Square Enix.  In this action packed, hilarious and “flarking” good adventure, you play as Peter Quill – better known (maybe) as Star-Lord, on a mission to save the galaxy – which may or may not have been your fault to begin with…

“I AM GROOT” aka THE GAME

Despite being called Guardians of the Galaxy, you spend the entirety of the game playing as Star-Lord! You don’t know who that is? Come on, man… You know! Former ravager turned amazing leader of the… never mind.
As Star-Lord you can expect the story to start off with you and your “team” being broke and in dept.  This encourages the squad to learn to work together, and maybe save the galaxy along the way if you don’t kill each other in the process.  In the story you see more of Peter having flash backs on personal life events around his 13th birthday and this results in a story that makes you feel a part of the family, with a constant flow of banter between the crew: Gamora, Drax, Rocket, and Groot.

This is not an open world combat game like Mass Effect, but takes on more of a linear format with a few places to explore, like in Star Wars: Fallen order.  Although your team will ask you what the “flark” you are doing while taking the micky out of you, as the illustrious leader of the Guardians, you are constantly handed options to respond to – whether during the actual story line or just while walking around chatting (more like arguing) with your team.  For 99% of the game, the Guardians are talking, arguing or wanting to kill each other – which is amazing as the dialog and performances are as funny as we’d expect looking back at the comics and the movies.  For the most part this dialog and banter is just for fun and makes you feel as though you are playing a “role play game” like Dungeons and Dragons.

This is not to say that all choices in the dialog don’t have repercussions in the game.  Some choices will lead to full on fights with large amounts of enemies and potentially ending in a boss battle, while other choices might lead to stealth missions with very little fighting.  This will be a constant theme in the game, but the option to choose adds a personal touch and different experience for everyone.  Once you have completed the game, you will find a new selection called New Game Plus which allows you to carry over perks (except Peter’s Shot perks and Galactic Compendium) and experience the game again by making different game choices and exploring areas you missed. 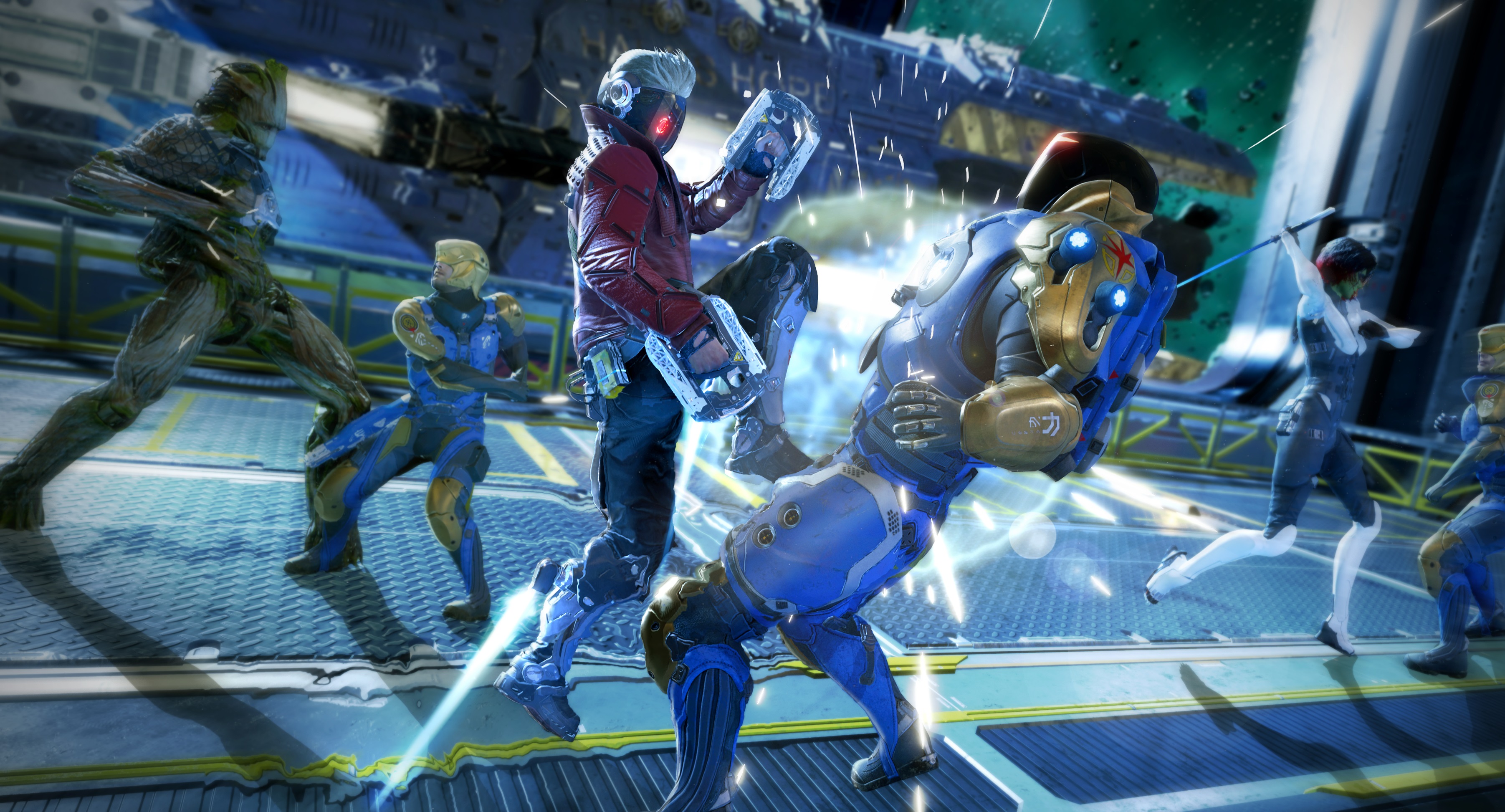 As said before, you assume the role Star-Lord, the leader (although Rocket would disagree) of the pack.  The game is played from his third person perspective, but this does not mean that the story is played only from or by Star-Lord.  During combat stages, you assume control of him and his pistols, but instead of changing from one character to another to use their abilities you command them in a similar fashion to Mass Effect, where you unlock up to four abilities per team member and instruct them where to use the said ability.  This gives you the ability to dish out damage to individual enemies, or gang up to deal a massive amount of damage to a single enemy.  The combat system gives you many options with the intuitive way its mapped to the controller (Xbox) allowing for rewarding combos and task juggling mid-fight.

During the course of the game, Peter will develop a few new skills in the form of four different powers, such as his jet boots and the elemental shots from his guns – which in my opinion are super cool, alongside his normal laser blasts (which never need ammo, but require reloading – this active -reload system comes down to timing but if done correctly will reward you with a burst of extra damage). 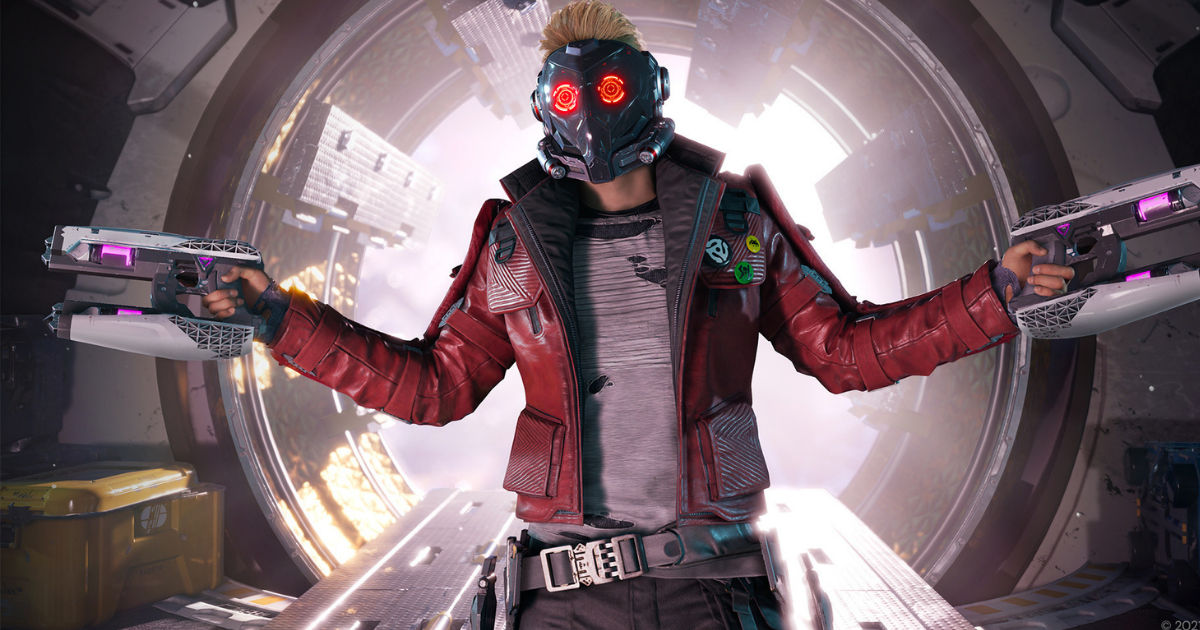 The combat is a never-ending fun time thanks to the different options and enemy design, which is varied enough to make you use different attacks and combos in order to achieve victory.  This use of team tactics makes the experience of fighting memorable by exploiting different abilities to weaken or remove shields, as well as stagger stronger enemies.  Each member of the team has their place and role to fill in battle – Gamora has a high damage output due to her sword, Drax is all about strength and staggering enemies, Rocket and his arsenal of weapons has a huge advantage on enemies and Groot “I AM GROOT” yes yes I’m getting there… Groot has binding, health and attack on targets.  These abilities and how you use them feel essential during the combat stages, even though you will be doing most of the damage yourself, the auto-attacks each character does out-side of your commands do as much damage as Drax did inside the Abilisk in GotG Vol 2 (you’d better know what I mean).

The constant banter throughout the combat stages keeps you entertained as I found that there was almost no repetition in the dialog between the characters, and in this banter, you can see the relationships grow and evolve throughout the story – keeping the fights, which can be monotonous, engaging.

Even in the fights, the dialog choices are brought in with an awesome move called The Huddle.  When activated, Peter calls the team in for a pep talk which offers you a choice of what to say to inspire the group.  This gives the team a buff for a time during the fight and, while this happens, one of the many amazing songs is played.  This brings in either an exciting or hysterical moment in the game that makes it one of my favourite moments, e.g. fighting a boss while “Everybody Have Fun Tonight” by Wang Chung played, #bestmomentever. 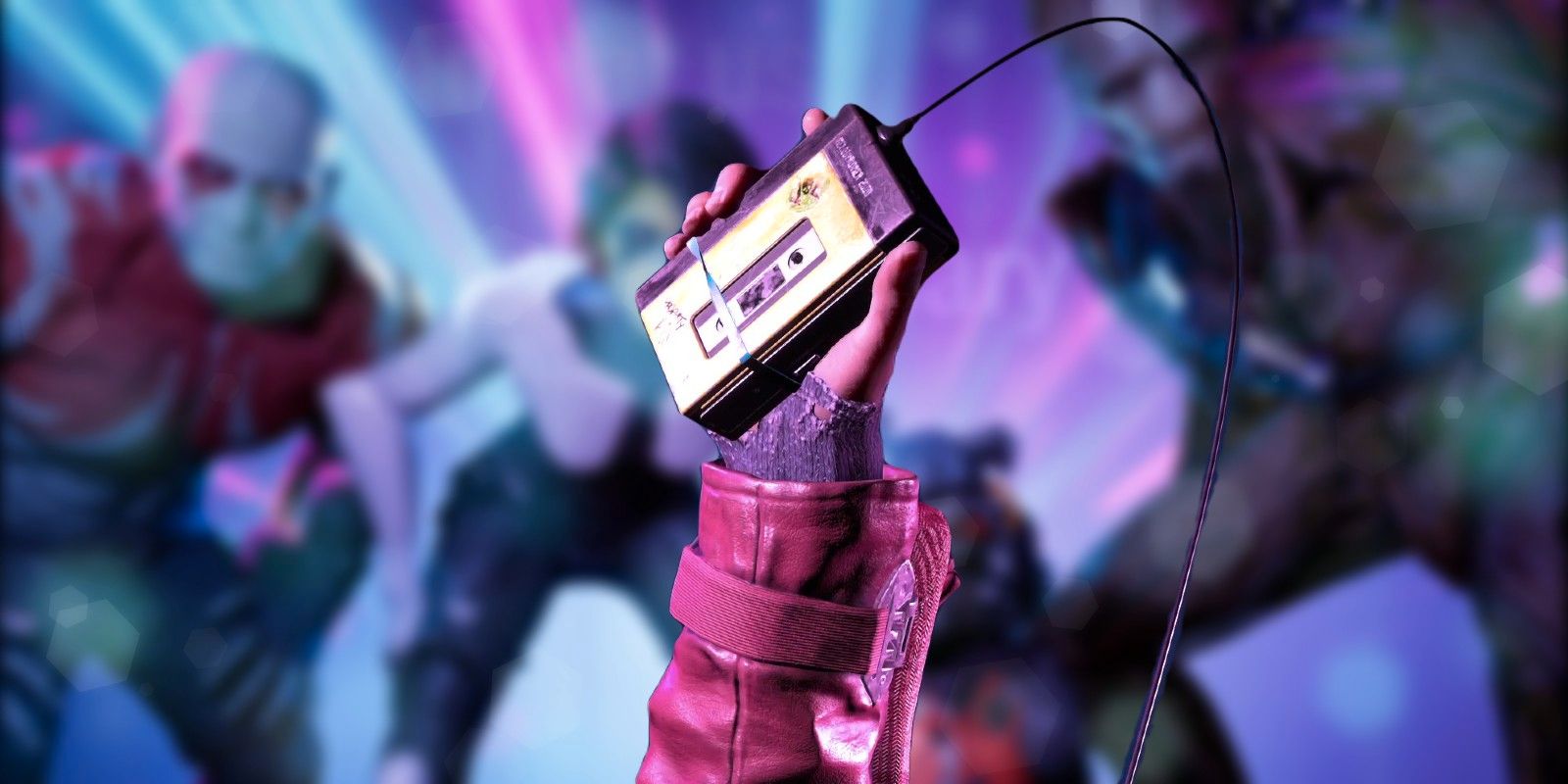 What the “flark” are we doing?

In between the fights and cutscenes you find yourself wondering around the locations.  From Nova Corp ships to the beautiful alien worlds – again this is all linier with the occasional separate path which leads you back to the original one.  Along the way, there are a few environmental puzzles to solve, collectables to find (like new suits for the characters) and crafting currency which you need to upgrade Peter’s guns.  You also find lore logs which open more dialogs between the characters, and small fight stages where you fight against minor monsters or people, depending on where you are.  Through all this the characters remain entertaining with an amazing assortment of banter. 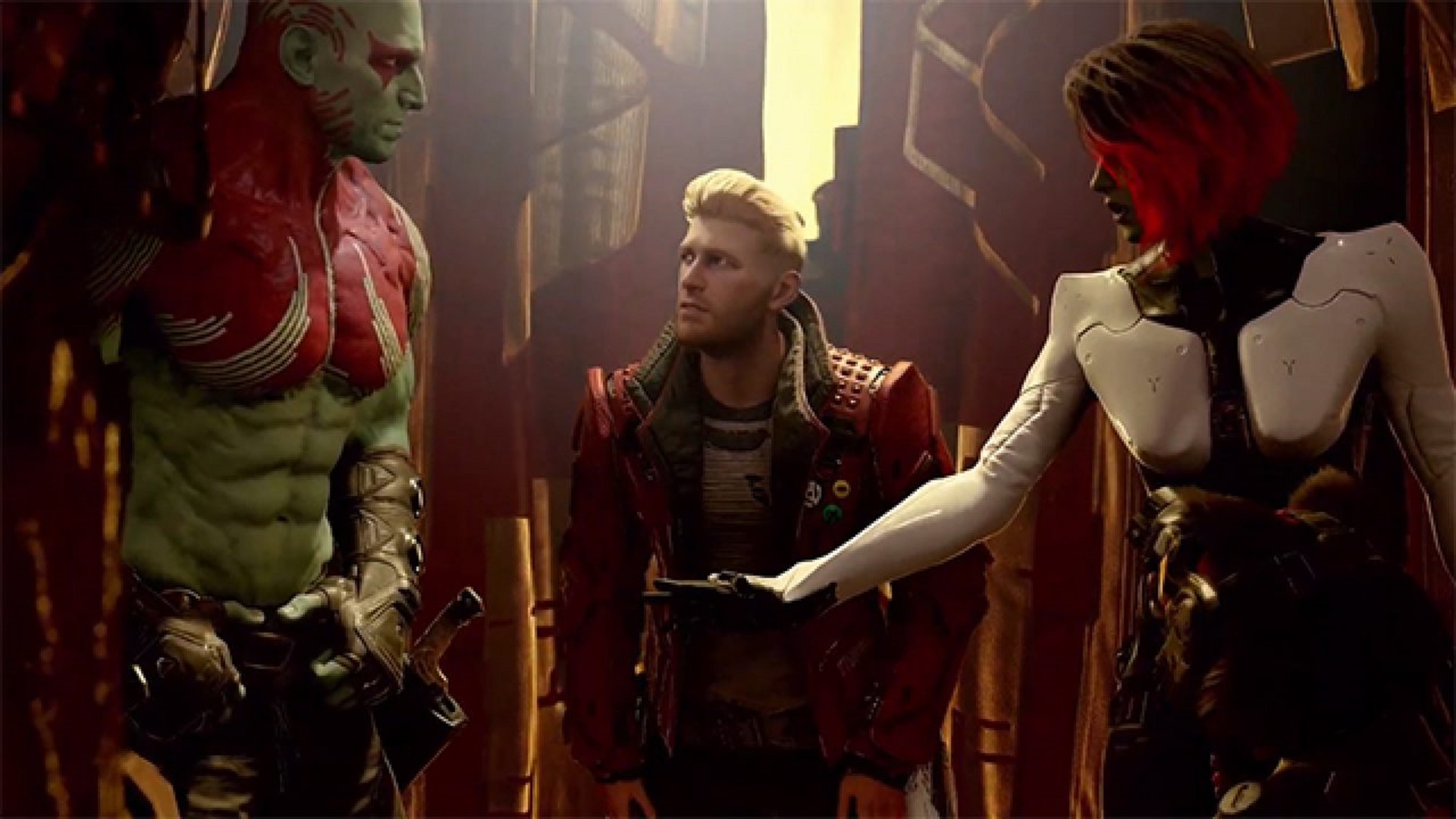 During the course of the game, you encounter many minor fights – which earn you ability points on completion, and helps to unlock new powers for the team.  The crafting is laid out in its entirety giving you the choice of what you want to upgrade right from the off set of the game, some give you a state boost while others are just new moves to use during combat.  All worth it!

From start to finish it took us 24.5 hours to complete Marvel’s Guardians of the Galaxy and, to be honest, that was the best 88200 second of a game I’ve spent in months (I’m just saying…).
It is an action-packed adventure filled with funny, goofy and heart-warming moments that we expect keeping the movies in the back of our minds.  The choices you are allowed to make turn this linear game into a personal one and makes you feel as part of the team, while the combat and levelling design is not difficult but remains engaging and overall entertaining.

Through the whole game, I found myself wanting to play more and I could not wait to hear what comes next in the dialog between the characters and their relationship development.  Guardians of the Galaxy shows us that linear games can be, and still are, fun and entertaining to play, as much as open world games. 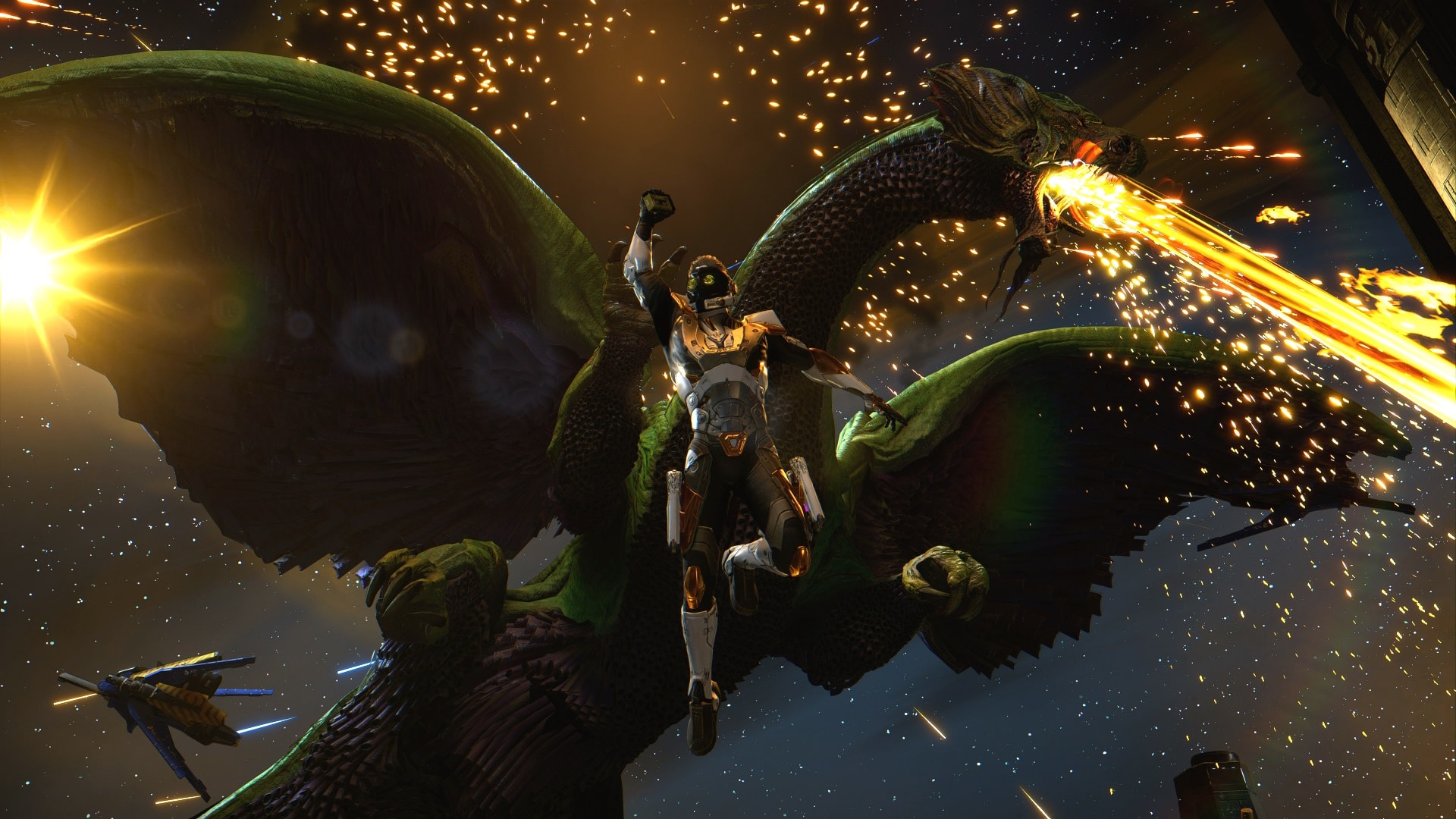 And for the EAX overall score, Marvel’s Guardians of the Galaxy is awarded 9 out of 10 stars.

A big shout out to our friends over at Prima Interactive for giving us the chance to assume the lead role of Guardians of the Galaxy, and look good while doing it.