Throwback to 1999 school holidays in a small town. It’s been a few years since the original Red Alert game has been released but I’d just saved up enough pocket money to buy a new video game from my nearby Game Store. No – not video game store (those didn’t exist in my town then) but the actual Game Store (the purple/pink one). I can still remember venturing into the electronics section, which was blocked off with glass and metal detectors, to go and find my new video game. This was always an exciting time for me as the electronics world was so fascinating to me and still so unknown – which only added to the awe of it. I remember then seeing Red Alert in all its crisp newness – and it was on SPECIAL! I immediately grabbed it and rushed to pay for it as I’d played it a few times at a friend’s house already and was eager to get cracking at it.

Rushing home and booting up the Pentium II family PC with a newly acquired Windows 98 SE operating system, I quickly opened the game and was shocked to see TWO discs in the case. Having a quick investigation of the discs, I put Disc 1 (high level logic was needed here) in my CD-ROM and started my install.

If you played PC anytime in the 90’s and early 2000’s then you definitely knew about the Command & Conquer games – either by owning them yourself, playing them at a friend’s house or just knowing about them through the sheer popularity the franchise commanded during those years.

Now – why throw back all the way to a school holiday in 1999 to talk about C&C Remastered Collection?
That’s because of the amount of nostalgia I felt when I installed the remastered version recently and started up Red Alert (it’s the most familiar one to me). I was honestly taking photos of the cinematics and sending them to friends, both new and childhood, who I knew had played this game too and every one of them could vividly remember the scenes from the shots I sent them. Now if that doesn’t show absolute gold when it comes to a game, then I don’t know what does.

Before we get into the nitty gritty, the feeling of sitting in my parent’s study playing through this game in 1999 that I still got more than 20 years later was incredibly real and I kept going back to this game now to relive those days when bills were a myth and the only stressful decisions I had to make were swim first or shower first. And based on this fact only – this game is already way worth it for me.

If that’s not enough for you – let’s delve deeper into the Command & Conquer Remastered Collection.

Currently, C&C Remastered Collection, goes for about R350 through Steam and the 24GB download will get you the remastered editions of Command & Conquer and C&C Red Alert in 4K, plus all expansions for both games.
Both games include full single player campaigns with various difficulty levels, a Skirmish mode where you can choose the map and number of AIs, as well as functioning Online PvP so you can test your metal against friends and other fans of the franchise.
The much loved Map Editor mode is also available where you can construct your own maps to try in skirmishes and against friends.
For the achievement hunter gamers out there, there are 33 new Steam achievements to grab while playing through the various modes of the Remastered Collection.

As already mentioned, based on pure nostalgic value, this is already a winner for me.
If you enjoyed either of the games back in the day, I can 100% guarantee that you will enjoy it again, even if you are no longer a fan of the RTS genre. It’s also been long enough in between that you may remember parts of the game, but the game will still present challenges as you’ve (hopefully) forgotten the easy ways you beat levels and will have to learn all that again.
Starting up both games for the first time, the Remastered UI ran a type of simulator thing on my PC where it checked my hardware and chose the optimal settings for my system to run at. This I found was quite good as it was quick enough, and could be skipped for the more experienced users who prefer to run their settings at custom preferences but also set the game up well for the inexperienced users who don’t know that their RTX 2080 Ti can run games higher than mid-tier graphics settings (if this is you – please send me your graphics card and I’ll send you one that can run a game at mid-tier perfectly). 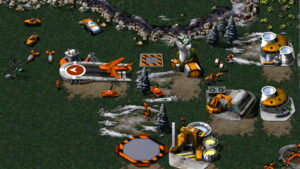 The game then allows you to toggle between legacy and remastered graphics at any time during the game by hitting the space bar. I almost broke my space bar in the first 10 minutes as I was smashing that thing to see what it looked like back in 1999 and what they’ve changed.
I must say – this is probably one of the best remaster upscales I’ve seen as the game is smoother and much better quality and the difference is VERY visible, even to the most graphic blind gamers out there. Being an RTS game – don’t expect super realistic shadows and nature, but rather see an RTS game looking like it should in 2020. 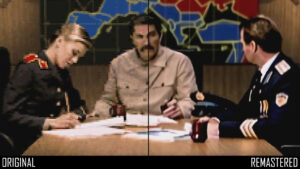 I personally feel this was done so well as the remaster team at Petroglyph Games included members of the original dev team from Westwood Studios.

Playing through the campaigns of both of the titles included in the Remastered Collection, I was reminded again of the old school grind of games as walkthroughs on YouTube didn’t exist back then and so I again chose to push through and beat levels by figuring it out myself and saving often. So, if there are walkthrough and “game hack” methods on YouTube and other services, I don’t know because I haven’t checked. And that is the best way to play the game in my humble opinion.

The overall playing experience of the Remastered Collection has been tweaked and doesn’t feel as “clunky” as a lot of older games do feel when you replay them. Missions are challenging and require some tactics and strategy. Rushing through them will often result in a mission failure (I saw my fair share of these while playing the more challenging missions) or in a sub-par result.

Based on nostalgic value alone (which by now you would see is quite high for me), I’d give them Command & Conquer Remastered Collection a 12 out of 10.
But based on a fair play of the game and taking all things into fair consideration (including nostalgic value), I would give this game a solid 8/10.

Thank you to the guys at Prima Interactive for giving us a chance to play the game and relive some of my childhood.