Ultrawide monitors are generally seen to be for the users who either need the extra size for work, or for those who just want to stick with the latest trends, and can afford them.  So when AOC dropped the monstrous CU34G2x at my desk, I was rather excited to see what all the fuss is about.

The AOC CU34G2X comes in a box that could easily hold the total contents of my wife’s shoe cupboard and even just taking it out the box is a mission if you are like me, vertically challenged.

The Ultrawide gaming monitor section has become flooded the last while which makes it really tough for new entries to really get a foothold in the market.  Unless companies take drastic measures with design, their product is bound to look similar, in some way, to the competition.  In recent times, the gaming monitor design has seen a red accent and RGB becomes the order of the day.  AOC however, decided that they might take a different approach.  Instead of trying to look different, they have decided to rather SHOW why they are different. With its minimal design and reserved looks, the AOC CU34G2X goes out of its way to show that it can fight with the more expensive monitors in the market today! In a world where it seems like the only way to get approval from the community is to cram in the most ridiculous amounts of RGB, AOC has chosen a more “grown-up” look.  the straight and square lines, paired with the thin bezel, gives the CU34G2X a very office-friendly look.  Many of the newer monitors prefer to go with lighter bases and frames but AOC chooses to use metal which makes sure this monster display is not toppling over or going anywhere.  The footprint of the stand is also surprisingly shallow considering the size of the monitor.  This subtle design might not be for everyone.  If you are forking out a large sum of money, you want your purchase to stand out in a crowd.  The AOC doesn’t do that, but rather keeps its head down and get the job done! What it lacks in lavish designs it definitely makes up for in features.  It packs a 34inch, QHD, 21:9 aspect ratio (3440×1440), 144Hz, and 1ms response time.  With a list of features like that its tough to not get excited.  Did I mention it’s curved?  And it features Adaptive sync, which means Gsync and FreeSync are both catered for.
But it does not end there, seeing as it is ultrawide, it allows for multiple inputs, these can come in the form of either HDMI (x2) or Display Port (x2).  With more than enough USB ports to cater to nearly every possible device, you may need to connect.

For someone like myself, who did not believe in ultrawide, and whether or not it is actually useful or just a nice to have, the AOC CU34G2X really has changed my mind for many reasons.  Not only is the curve (1500) enough to improve immersion, it is also not too much and when using it for mundane office work the 21:9 display makes having multiple tabs and/or spreadsheets open side-by-side an absolute dream!  Coming from a 27″ QHD 144hz, 1ms monitor myself, I quickly realized how much I was truly missing out on, especially when it comes to the color gamut.  Straight out of the box, the colors seemed true and natural which means that AOC hit the color adjustments just right.  Playing some escape from Tarkov made me realize how dark certain parts of Interchange really should be.  After an adjustment period, the games felt significantly more vibrant thanks to the dark blacks and vibrant colors. Another feature of the AOC GU34G2X is the addition of HDR.  I have not experienced a true HDR monitor before so this was my first try.  When turning on HDR in Tomb Raider the visuals simply blew me away.  Colors and depth become amazingly clear.  I did however find that turning on the HDR setting on the monitor itself does make for a strange smudged effect on games that are not HDR supported.

The CU34G2X is crammed full of nifty dials and settings that you can set and play with.  Shadow control will improve visibility in darker games.  Color saturation will help get the perfect color pallets if the stock one doesn’t suit your taste.  Crosshair overlays ( naughty), an fps counter, a few predefined picture modes such as FPS, RTS, racing, etc.  PIP, or Picture in Picture, is something that might seem silly when not using a bigger monitor.  I tested this feature while playing a game of golf on my Xbox One, which was connected via HDMI, and watched the F1 from my pc, connected via DP, on the same monitor with a PIP.PBP, Picture by Picture, is another nifty feature for those who already like to use a second monitor for work or play.  Now you can get rid of the second and use the ultrawide to provide you with enough screen to have moth displays on one.  Never Alt+tab to another window ever again.  Simply have both open next to each other!
Adaptive Sync is also a big selling point for this monitor.  Apart from the long list of everything that makes the AOC CU34G2X remarkable already, the real deal for competitive gamers would be the AdaptiveSync.  Allowing the monitor to refresh at the rate at which the GPU provides the frames.  And AdaptiveSync caters for both Nvidia and AMD users alike.  No more upgrading GPU’s and sticking to a brand due to the monitor you have. 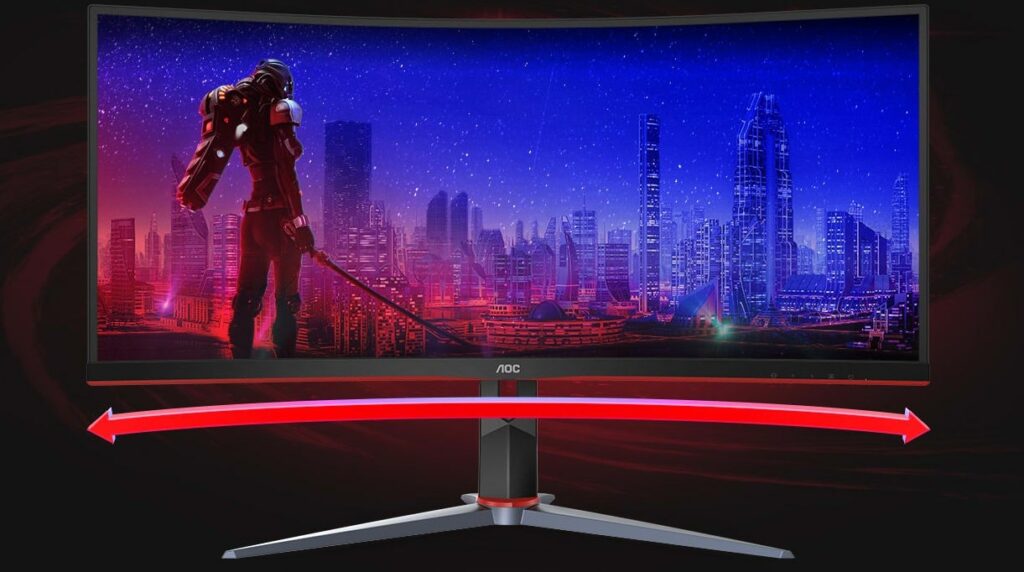 The AOC CU34G2X ticks the boxes without stumbling.  The 34” ultrawide display is wonderful, something I will be sad to see leave (maybe AOC will gift it to me?).  Make that display 144hz, give it 1ms response time, and 1440p…  There has to be a catch right?  R15 000, give or take some, in comparison to its competition, makes the AOC CU34G2X even more appealing.  The general look and feel will slot seamlessly into any work/office environment.  AdaptiveSync is simply a no-brainer these days and AOC has taken it upon themselves to provide it.

Other than a slight improvement in the HDR technologies, which would bump the price significantly, and bumping the max brightness ever so slightly, the CU34G2X is a masterpiece and has been able to convince me, someone, who didn’t believe in the “gimmick” of ultrawide, to rethinking life if I were to go back to a normal monitor…

Special thanks to AOC for the review hardware