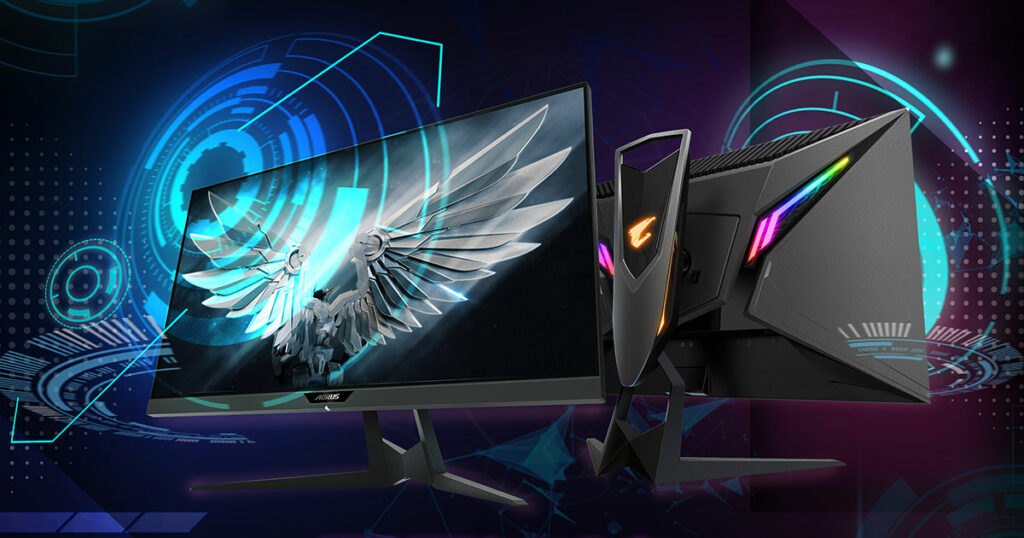 Monitors, and gaming monitors, in particular, have been a topic of conversation for quite some time.  What is best?  what is better?  Do I get a 1080p monitor with a 240Hz refresh rate, or 1440p with 144Hz.  HDR?  Response time.  If you have lost me completely I don’t blame you.  With 4K gaming becoming more of a thing now with the latest generation of consoles claiming to be able to run 4k gaming at high refresh rates, the monitor field has been kicked into overdrive, seeing a magnitude of new monitors flooding the market claiming to be able to do it all.  I have been fortunate enough to get my hands on a wide variety of gaming monitors, ultrawide, 1440p, 4K, 240Hz, I have used them.

So when Aorus, the gaming division of Gigabyte, dropped the very angelic-looking AORUS-FI27Q-P Tactical Monitor on my desk I thought I was going to be reviewing just another monitor…  Boy oh boy was I wrong!

High-end monitors need high-end PCs and graphics cards to push the magnitude of pixels around and with the current price of graphics cards, unless you have a spare organ to sell, sticking to the GPU you have seems like the more logical option. Gigabyte’s Aorus FI27Q-P is the sweet spot when it comes to performance with a resolution of 1440p running on a 27inch on an IPS panel, 1ms response time, 165Hz refresh rate, G-Sync, HDR400, and 10-bit processing, what a mouthful.  Looking back at those features makes you realize what a monster Gigabyte’s Aorus FI27Q-P tactical gaming monitor really is.  Is it the best gaming monitor we have reviewed?  Keep reading! 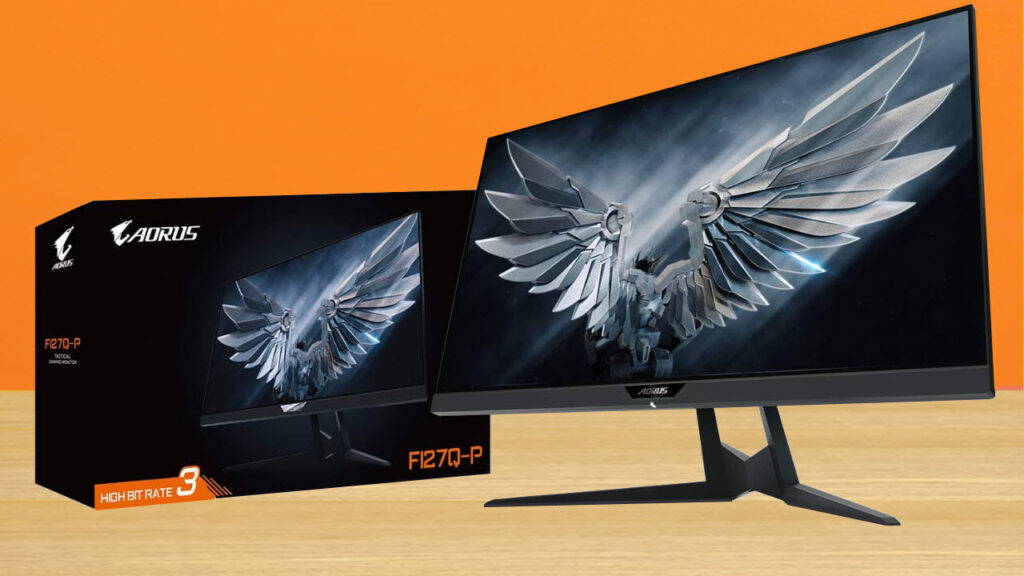 Gigabyte is not messing about when it comes to the Aorus FI27Q-P monitor.  It is ready to take on the competition in both style and performance.  The panel casing, arm,  and base stand all feature sharp and straight lines which give it a very modern feel.  The foot piece is made from brushed aluminium and gives a very firm base while keeping the footprint as small as possible.  The stand is a mixture of hard plastic and some metal with some RGB infused.  On top of the base stand, the metal makes a loop that works great for a carry handle, seeing as the  Aorus FI27Q-P comes in at a respectable 8kg it is handy to have a handle to move it without getting fingerprints on the panel.  The mentioned RGB is built into the sides and back of the stand, as well as the rear of the monitor itself.  In the centre of the stand, facing the rear is the proud Aorus logo which looks immense when the RGB lighting runs through it.

Although the box says the Aorus FI27Q-P monitor is frameless, exactly like any other brand, there is still a very thin bezel that sits on the sides and the top of the panel.  The bottom of the panel is a plain matte black plastic finish with a single small LED to indicate power status, as well as a gloss AORUS name, would be cool if it could be RGB as well, but that’s just me.  Aorus has even incorporated an anti-glare on the screen by adding a layer of 3H hardness and even with curtains open and light streaming onto the Aorus FI27Q-P monitor, it did not bother me one bit.  I did use it as my excuse for being terrible at Warzone though, sorry Aorus FI27Q-P monitor!  On the underneath of the monitor, there is a small joystick that is used to control the OSD.  The OSD interface is extremely intuitive and anyone will be able to grasp the concept of how to use it, instantly. 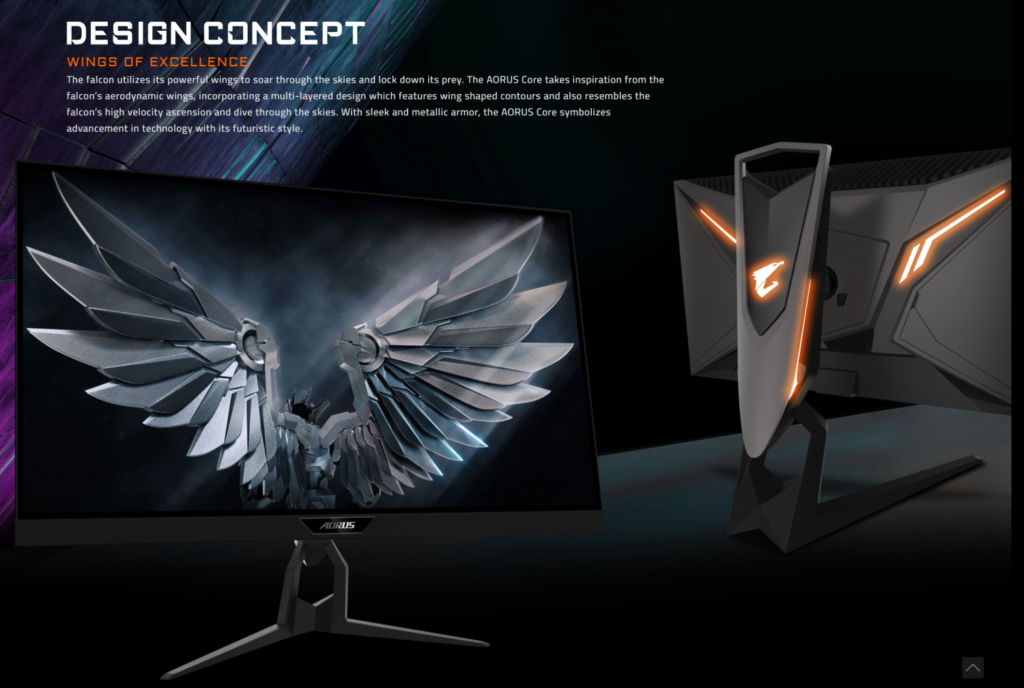 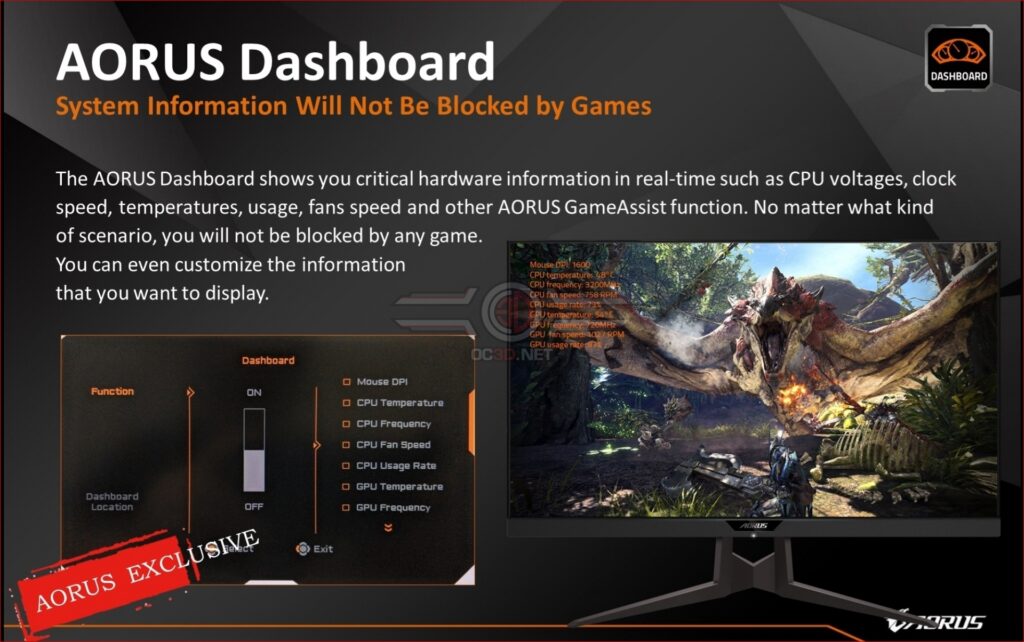 Gigabyte and Aorus have crammed the Aorus FI27Q-P monitor full of so many features, another one of our favorites, and Aorus Exclusive is the Black Equalizer 2.0.  Other monitors will create deep and dark black colours by generally turning all the colours and brightness down.  Not the Aorus FI27Q-P monitor, no, Black Equalizer  2.0 is capable of, independently, adjusting 1296 partitions of black at the same time without affecting the areas of the monitor 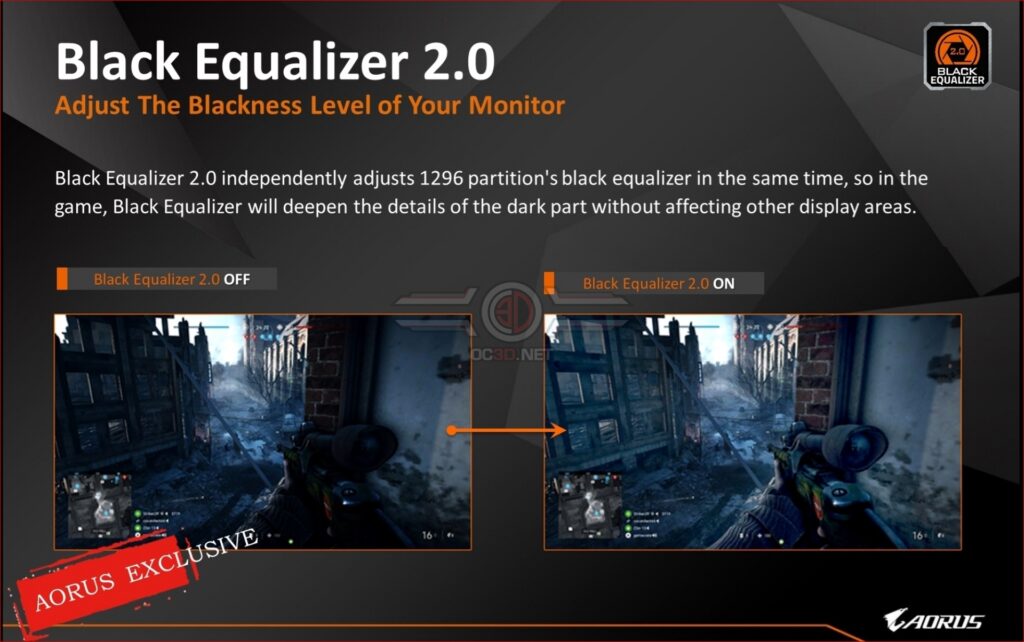 Active Noise Cancelling 2.0 is yet another feature that Aorus has brought to the Aorus FI27Q-P monitor.  The Aorus FI27Q-P monitor provides an output for headphones with an output of up to 120dB Signal-to-Noise ratio.  This is amazing considering the audio is being output by a monitor and not straight from the motherboard where you would traditionally get your audio from.  What makes this feature even more impressive is that thanks to some serious tech being squeezed into the monitor, the audio output is capable of driving headphones up to the impedance of 600 ohms, something that you would usually see in big, stand-alone amplifiers.  Yet another Aorus exclusive!

OSD sidekick is one of the features that I did not know I needed.  OSD Sidekick is the ability for you to change the settings in the Aorus FI27Q-P monitor OSD not only by using the joystick fitted to the monitor but by using your mouse and keyboard.  Aorus also claims that it will provide further updates to the OSD Sidekick and even protection, I am intrigued to find out what they mean by that.  One thing is for certain, we all hate fiddling our way through a cumbersome OSD, Aorus has already helped by making the OSD on the Aorus FI27Q-P monitor very user friendly, but now being able to use your mouse and keyboard to easily move through the OSD, even setting up keyboard shortcuts to change settings, now that is revolutionary. 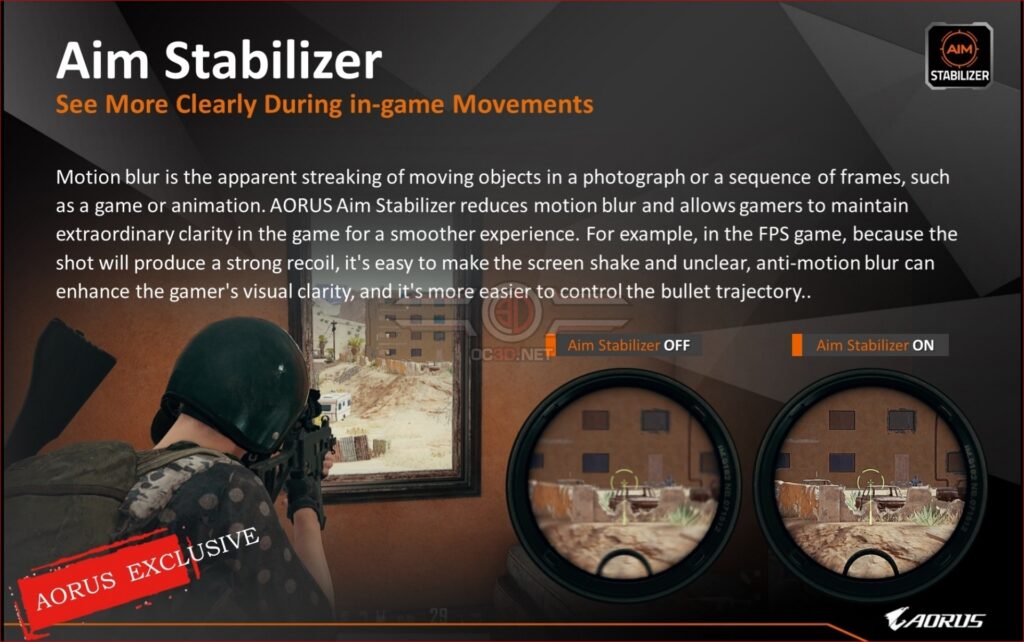 For the gamers who mainly focus on first-person shooters, Aorus has crammed some goodies into the Aorus FI27Q-P monitor for you as well.  First up is the Aim stabilizer, when you are running and gunning in your favorite shooter, you will often notice blurring from the recoil of a shot or trying to aim while firing your gun, turning off motion blur in the settings usually helps a slight bit, but thanks to Aorus, the FI27Q-P monitor can now give you the added advantage of reducing the motion blur even more and enhancing the visual clarity to ensure you have the best chance of landing that shot!  The next feature that most shooter enthusiasts will relish is Crosshair, not only does the Aorus FI27Q-P monitor offer an on-screen crosshair, no, you can even draw your own and use that on the monitor! 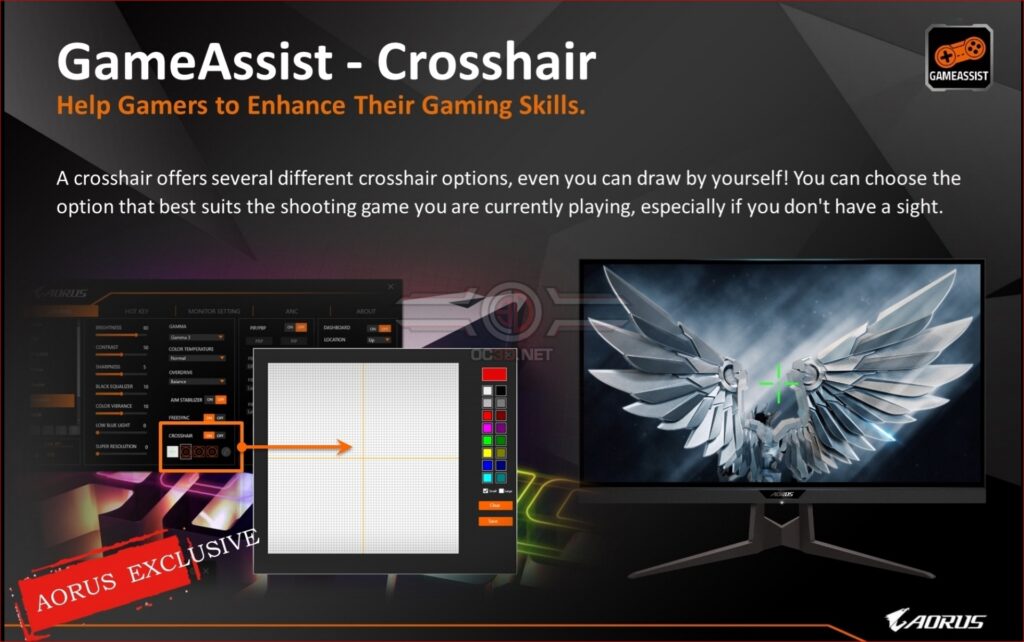 Lastly, but definitely not the least, is PiP and PbP, picture in picture and picture by picture are a feature that the Aorus FI27Q-P monitor provides for users who want to be able to watch a game guide whilst playing the game, for example.  The feature allows for a second input to be displayed on the same monitor as what you are currently watching. Different inputs, one screen, at the same time.  Want to switch to the other input audio, simply flick between them with the OSD joystick.  The one final feature that is handy for any gamer who loses track of time is the USB fast charger.  The Aorus FI27Q-P monitor has an embedded SUPERSPEED USB Charger which will provide 5V with 1.5A to give your device that much-needed boost! 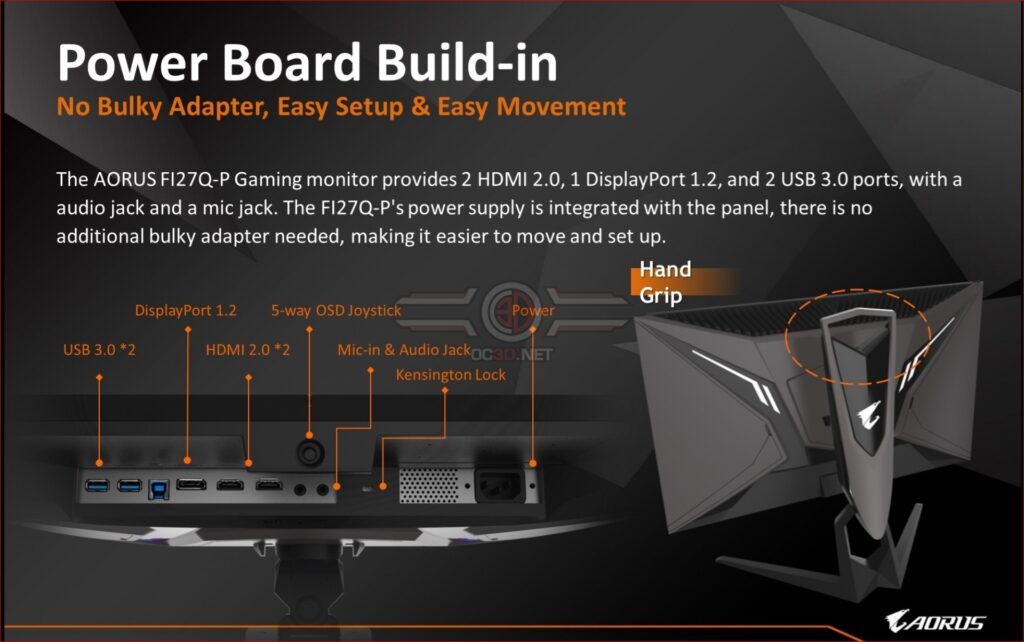 Taking the Aorus FI27Q-P monitor into some gaming felt great.  We jumped between a few titles like Fortnite, for the bright and vibrant colours, Fall Guys, because my 4-year-old forced me, and the dark and gritty environments of Escape from Tarkov.  Starting off with SDR games and we were totally blown away by the vividness of the colours and contrast.  The dark and gritty environment of Escape From Tarkov becomes increasingly more eery.  In a game where your senses are heightened due to the fear of death and so much relying on what you can see and hear.  Making your environment more realistic and gritty, does not help to make life easier, yet it makes the game look SO good!  Dark corners in Factory become true nightmarish areas as, unless you turn your brightness up immensely, is there someone sitting and watching you in the shadows, who knows?!  The colourful titles such as Fortnite and Fall Guys look absolutely tremendous on the Aorus FI27Q-P monitor.  With HDR turned on and off, the massive colour palette that the Aorus FI27Q-P monitor can produce gives any title that extra pop.

We have been fortunate to experience many of the latest and greatest monitors as they arrive on the market.  And secretly we have our dream monitor, if not a specific monitor but a few features that we would love.  All of that has fallen by the wayside with the Aorus FI27Q-P monitor.  The Aorus FI27Q-P monitor is the very best 1440p 27-inch monitor we have ever had the privilege of reviewing.  The extremely large colour gamut as well as its high refresh rate sets the Aorus FI27Q-P monitor apart from the other monitors we have seen.  Yes, you can get a 4K monitor or a 32″ or even bigger, but the Aorus FI27Q-P monitor represents the perfect middle-ground between what gamers want and what is reasonably affordable.

special thanks to Gigabyte South Africa for the review item