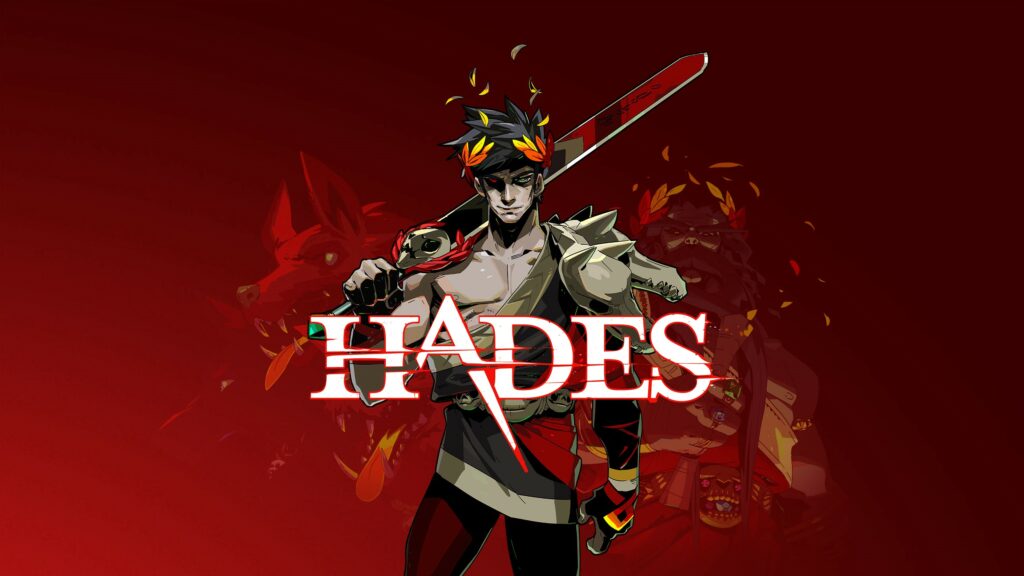 Supergiant, a production house known for its preference of quality over quantity, has recently had the official launch of their rogue-like dungeon crawler, Hades.

Hades spent a fair deal of time in early access and Supergiant really did use this time well to release a near flawless game with a challenged, yet rewarding, combat system, rich storytelling, and a good deal of quirky characters and humour thrown into the mix.

We were lucky enough to delve into the depths of the Underworld and take on the role of the son of the Hades himself as we try to desperately battle our way out of its depths of darkness and answer a burning question we’ve had, as well as find the answers to new questions we pick up along the way. 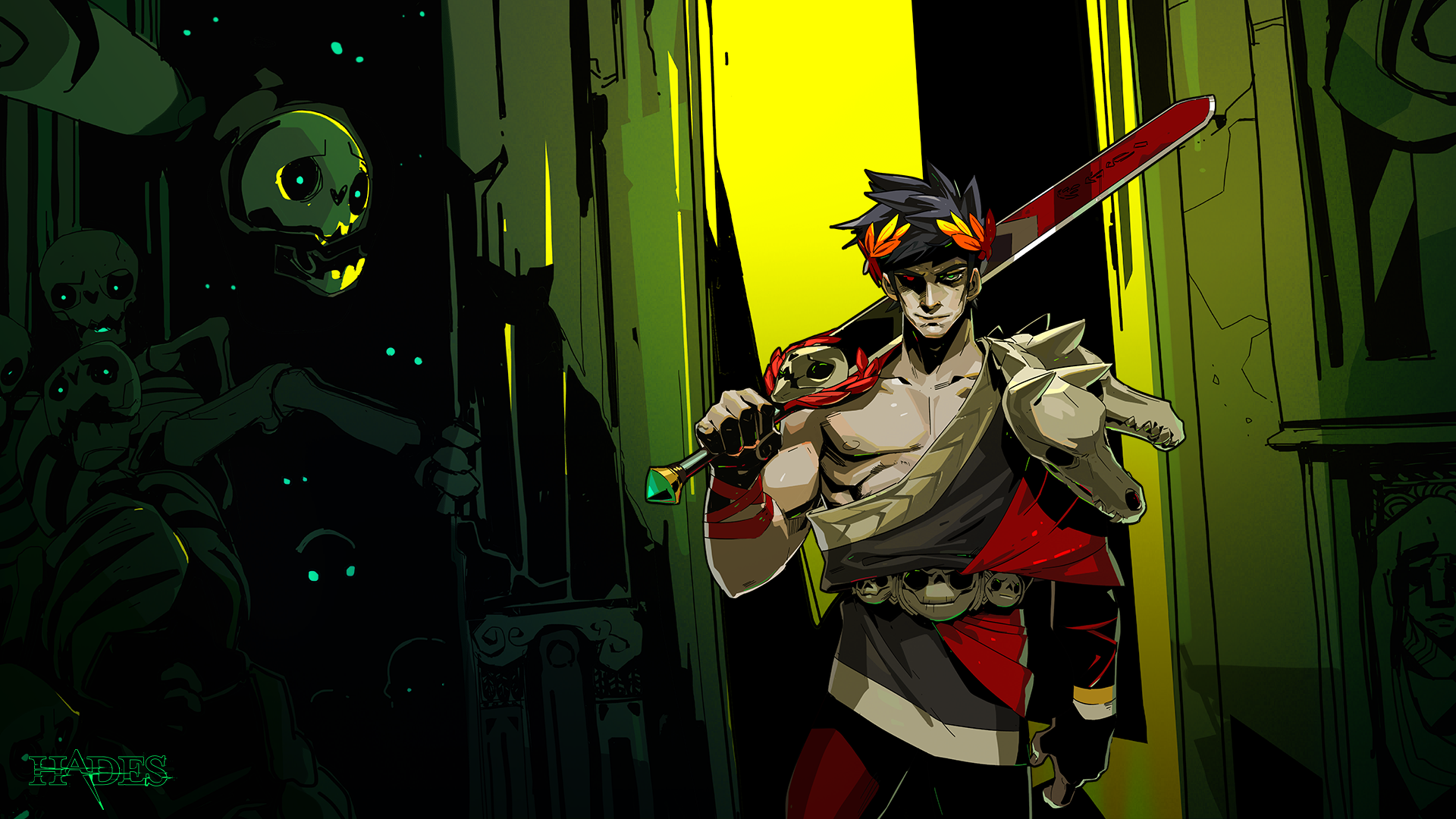 As previously mentioned, you take on control of the game’s hero, Zagreus.  Zagreus is a disgruntled teenager who is tired of living under his father’s roof and tries to escape the Underworld and make it to his relatives at Mount Olympus.  This looks a little different when your father is Hades, and you’re the prince of the Underworld.

Along the way, in one of your many attempts to reach Mount Olympus and, more urgently, escape the Underworld, you are aided by your relatives who, obviously, are the Gods of the Greek Mythology.  Their aid changes for each run and by pairing different God’s aid, you can make for a rather interesting builds to take on the denizens of the Underworld.

The game is a dungeon crawler in the best sense of the term and uses a hack-and-slash combat mechanic.  For those who find hack-and-slash mindless, Hades ups the ante and really requires the player to apply themselves as each foe follows different attack patterns and uses different attacks on you, so simply running it and hacking at them isn’t always (in fact rarely) the most effective approach.  Coupled with the varying aid you receive along the way and the fact that the labyrinth ahead of you changes every time you leave the House of Hades, the game really keeps you on your toes and trying to figure out the best way forward as every run really does look completely different.

Death is a massive component of this game.  Ironic since you are in the underworld?  Maybe.  Hades uses death as the trigger to progress the story line and darkness that you earn in your runs through the Underworld can then be spent at the House of Hades to give you some persistent skills and abilities to make your next run a little easier.  So, in a sense, death is actually levelling up in Hades… 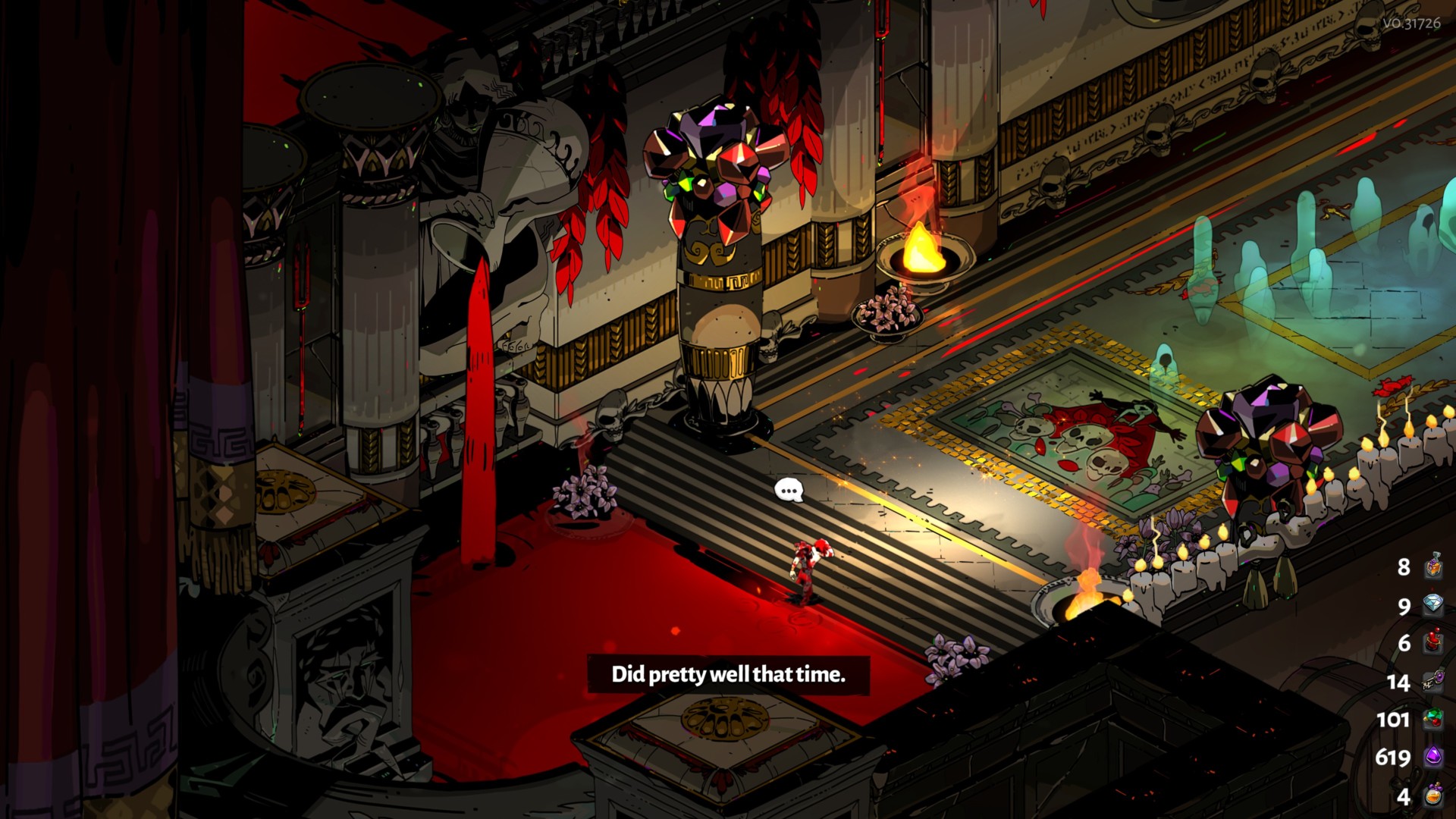 With that being said, every death will see you remerging from the River Styx and into the House of Hades, only to be chastised by your father who seems rather disinterested in your attempts and quite annoyed by your rebellious behaviour.  He doesn’t get too involved as he firmly believes that the no one can escape the Underworld, thus making your attempts futile.
In the House of Hades, you can interact with several characters. These are:
Hades – The lord of darkness himself, and your father. As already mentioned, he seems more annoyed by your attempts than anything else.
Achilles – Friend and mentor who has taught you in the way of weapons and combat from a young age.  He has made an assortment of infernal arms available to you unlock and use in your escape attempts.
Nyx – The mother of Darkness and the mother who raised you and aids you in your attempts. Quite early in the story, it is revealed that she is the one who first got you into contact with the Olympians.
Skelly – a mysterious “practice dummy” you can try your weapons against in your courtyard.  He seems to enjoy taking a beating and alludes to a benefactor who is paying him to be there to assist you.  He also sometimes gives useful tips on how to defeat enemies in your escape attempts.
Cerberus – the guardian of the Underworld and your personal pet.  You can interact with him, and he is very fond of you.  So much so that he apparently ransacked the lounge in desperation when he found out about your first escape attempt. 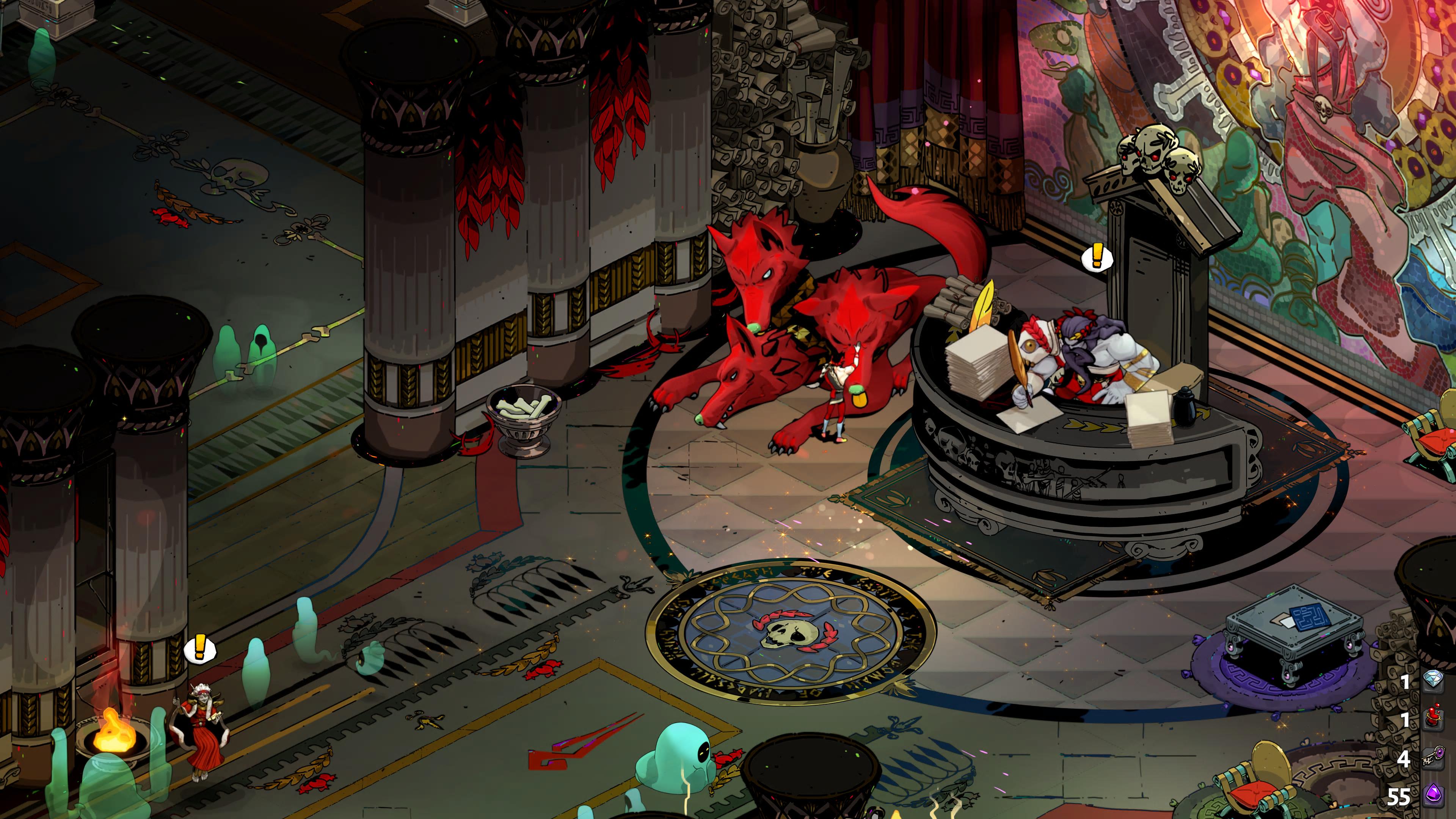 Along with these, there are various other characters that you can talk to and interact with both in the House of Hades and in your travels through the various planes of the Underworld. Each re-entry (sounds better than death) to the House of Hades will bring in new unique dialogue with all the NPCs there as the story progresses.

Your quest to escape the depths of the Underworld will take you through different planes, each plant having a mini-boss encounter somewhere in the middle and a boss encounter in the last room, or area, of the plane who have just battled through. Each plane brings in new challenges and difficulties as you progress through the game and get closer and closer to achieving your goal of escape.
The four areas that you encounter are Tartarus, Asphodel, Elysium, and the Temple of Styx. There is also a chance to enter the Chaos Gates and achieve some great boons, provided you survive the cost it takes to get them. 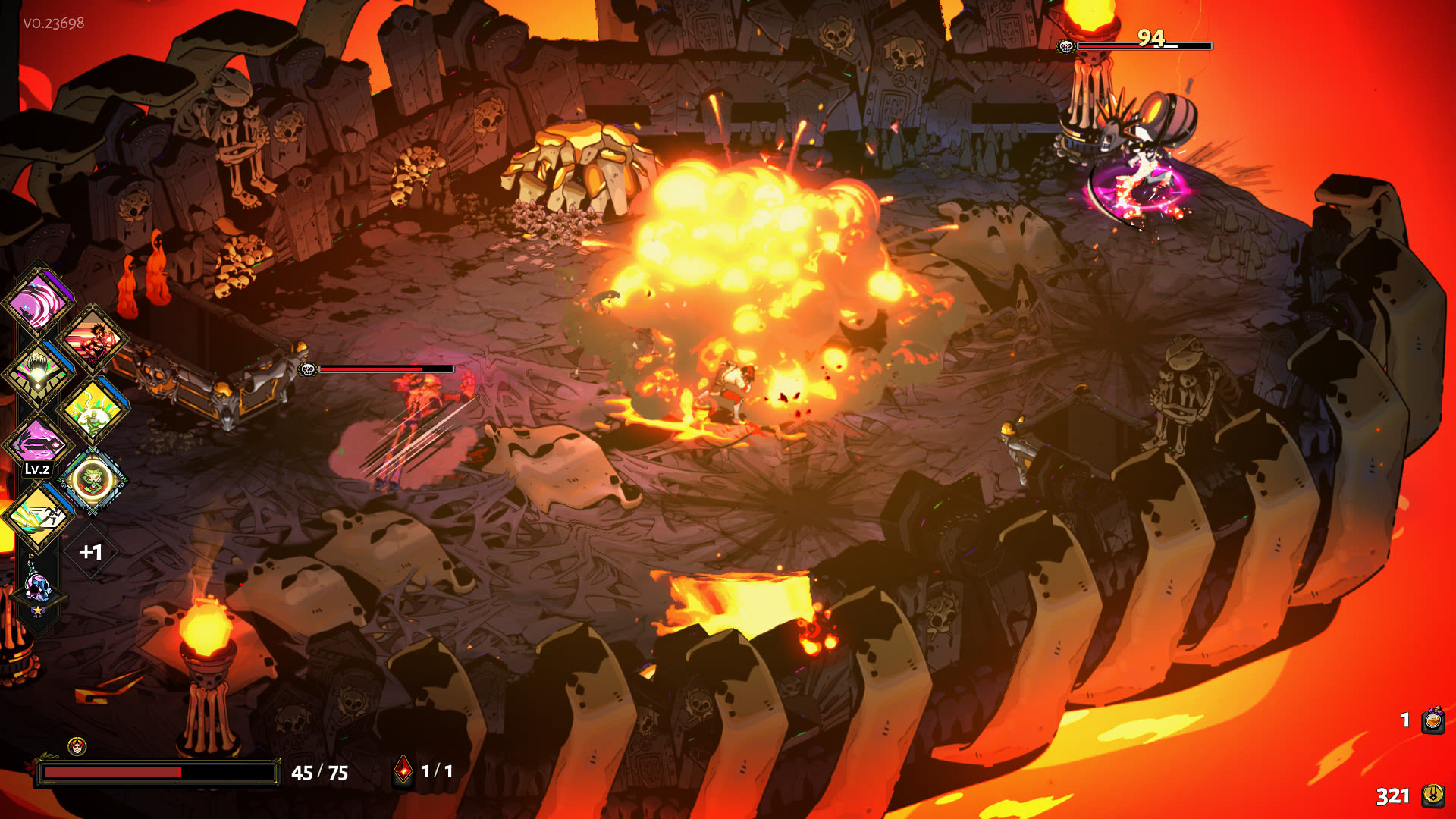 At each death, you start again at the House of Hades and must battle all the way through each level to get to the next.  This is quite a grind, but it doesn’t feel that way all the time as each run produces a new unique layout, with new choices and boons, and new random enemy spawns in each room. The only room that stays the same is the final boss room for each level.
Will of this randomly generated change, there really is no one way to run through the game as every player will have a completely unique experience.

After rewiring our thoughts around dying not being that bad in this game and actually being a part of it, and, sometimes, even looking forward to death just to see the latest happenings in the House of Hades and to level up your character a bit to make the next run a bit easier.

This, mixed with a good deal of humour as you see the Olympians bicker amongst themselves for your favour, and their jealousy when you replace one of their boons with a better one from a different God.  This doesn’t always end so well as you then must defeat their rage at being rejected.

Accepting the grind in this, as well as many other dungeon crawler titles is imperative if you plan on getting the most enjoyment out of it.  Especially since there are no campfires and checkpoints to fall back on as you progress.  You die in the Temple of Styx? Back to the House of Hades and all the way through Tartarus, Asphodel and Elysium again.  BUT – each run does get quicker and easier as you progress and for me, running through Tartarus and defeating the fury of the boss (hopefully you see what I did there) who is waiting for you is a quick farm and warm up to help me with the higher levels.

Overall, Hades is one of the best rogue-like, dungeon crawler I have played in a long time. The rich storytelling, quirky NPCs and humour is enough to set this in a league of its own. Coupled with a challenged, yet highly rewarding combat system, the ever-shifting rooms of the Underworld and its unpredictable encounters really only serve to solidify this game at the top of its class. The art style, ease of play and the fact that you can just go and look out over the (surprisingly) beautiful planes of the Underworld in some areas again make this a cut above the rest. 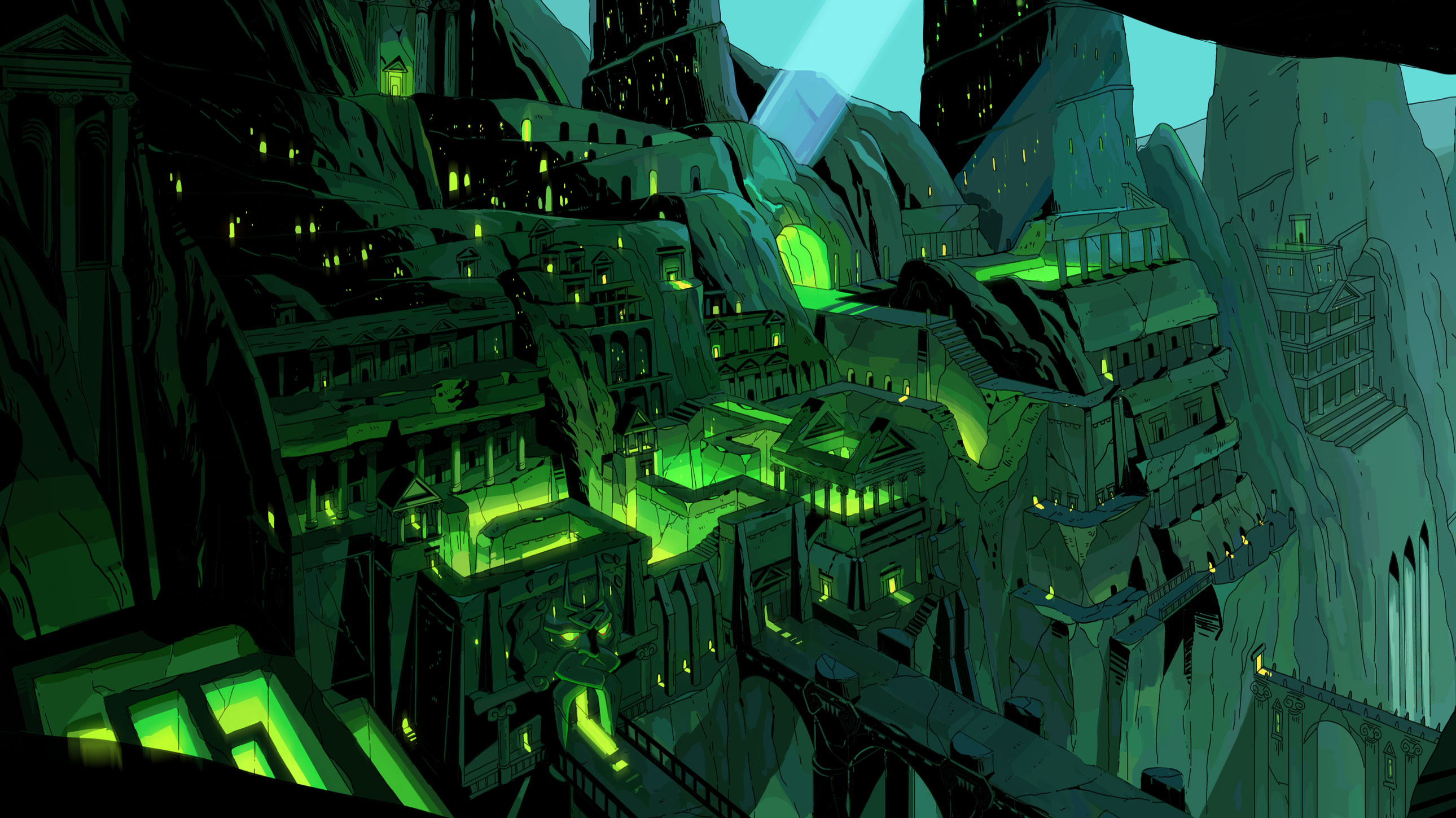 So – saying we have a game that is in a league of its own, top of its class and a cut above the rest really is a bold statement and to back it up, I can really only say one thing. Go and try it for yourself on whatever platform you choose as it really is on all of them, including MacOS and Nintendo Switch.

Here’s the game’s official trailer to whet your appetite even more if you aren’t already frothing at the bit.

With all that being said, I back my bold claim up and award Hades with a solid 9 and a half stars out of 10. This really is a game worth playing and spending hours in as you unlock the highly intriguing and mysterious story.

A big thank you to our friends over at Prima Interactive for giving us a chance to try this title out for ourselves.