Logitech has long been renowned for making some of the best peripherals around. And is seen by many as the flagship in many categories.  In recent years the Pro-range has quickly made its name as arguably the best peripheral line-up for the serious player and many esports professionals.  This alone should show that Logitech is clearly doing something that gives the esports professionals the edge.  If you are not the competitive gaming type.  And you are looking for an exceptional wireless gaming headset, the Logitech G733 is the only headset that comes to mind.

Sporting a sleek and attractive design, mixed with great comfort and exceptional sound and battery life.  It is only understandable that Logitech would want to keep with the magic that the G733 has brought.  And that is why they now bring us the Logitech G335.  We were lucky enough to get our hands on a set and we took a look, here is what we found.

The Logitech G335 takes nearly everything that makes the G733 so wonderful and simply adds a cable and removes some RGB.  This might sound terrible for those who love to have a rainbow radiating from their headset.  Fortunately, Logitech replaces it with some very funky color options.  For those who are not familiar with the wonderful wireless G733, just like the Logitech G335, the headset has a very bold design with very attractive oval-shaped earcups which has great curvature.  The headband is something that truly made the G733 so comfortable and similarly, the G335 has a removable and adjustable headband strap.  The headband makes the already lightweight G335 feel even lighter as it does not rest on only one or two places on your head but a wide, comfortable band across your whole head.  This is a feature that I wish ALL headsets would adopt. 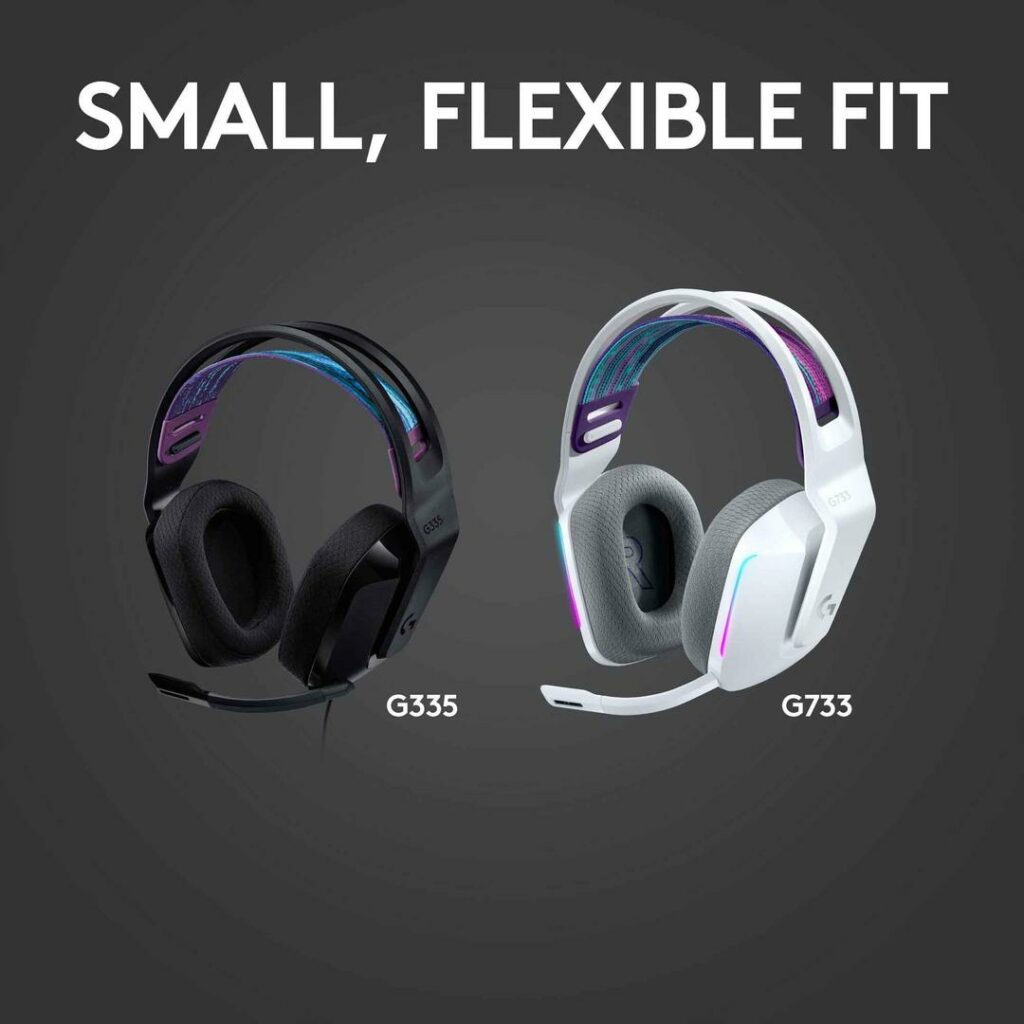 The earcups are still adjustable by means of a slider on the earcup itself which is discretely adorned with the very famous “G-symbol” as well as the G335 name slightly higher up.  The boom microphone sits on the left earcup and is very easy to move down and adjust to a perfect position.  Controls are also at a minimum with only a volume roller that is also situated on the rear side of the left earcup.  The earcups are made from a very light and breathable foam which works great with the extremely lightweight and breathable G335.

Since the Logitech G335 is so extremely lightweight it is easy to think that the build quality might not be great.  The G335 is made from very lightweight hard plastic and with a rather small frame it is easy to think that the G335 might not be able to withstand extensive and regular use.  Fortunately, Logitech has become synonymous with sturdy and reliable products and the G335 is no different.  The lightweight and flexible plastic that is used in the G335 actually allows for it to sit comfortably on nearly all head types.  With just enough clamp force to sit comfortably but not hurt after long sessions.  The earcups do not have the leatherette finish like the G Pro headsets.  The extremely soft memory foam does a great job of creating comfort while not creating heat which can be a problem if you use leatherette earcups.  The earcups are big enough to comfortably cover all types of ears and are deep enough to allow most ears to not touch the drivers.  Since the Logitech G335 is near-identical to the already-lightweight G733, with only the wireless feature missing, the G335 comes in at a mere 240g.  That is a staggering 38g lighter than the G733. 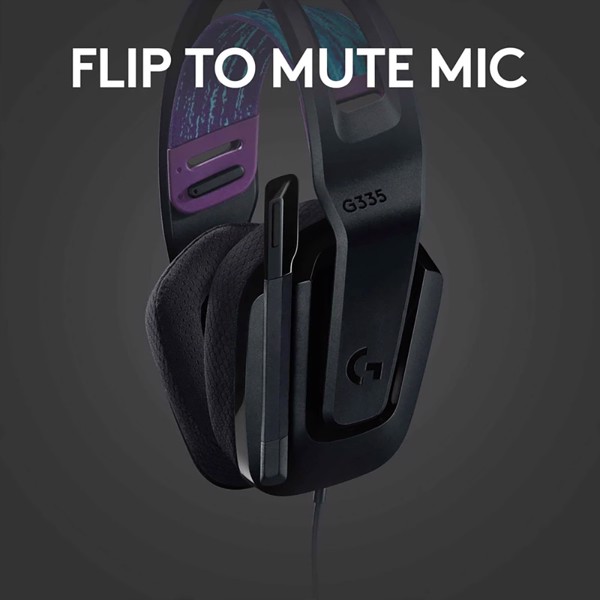 At a price of touch over R1 000 when it launches, and a design and build quality that is top quality, there must be something that had to take the back seat during the creation of the Logitech G335.  Was it the audio quality?  Well, that is a tricky one to answer, and here is why.  The Logitech G335 is fitted with Logitech’s 40mm drivers.  Many of the higher-tier headsets are all fitted with the more powerful 50mm drivers.  Due to this, the sound is not quite as punchy as you might expect from a bigger driver headset.  Luckily, Logitech is great at tuning its audio drivers to fight against much bigger and more powerful drivers, and the G335’s 40mm drivers are no different.  The audio is very crisp and clear in the mids and highs.  The bass is a little lacking but that is partly due to the lightweight plastic that is being used as much as Logitech needed to find a happy medium where the mix between highs, mids, and lows, often one of the three needs to be sacrificed.

On the feature side, the Logitech G335 is a little barer, but understandably so for a budget headset.  The G335 does have a flippable microphone that can be muted by simply flipping it up since there is no mute button on the cable or headset. 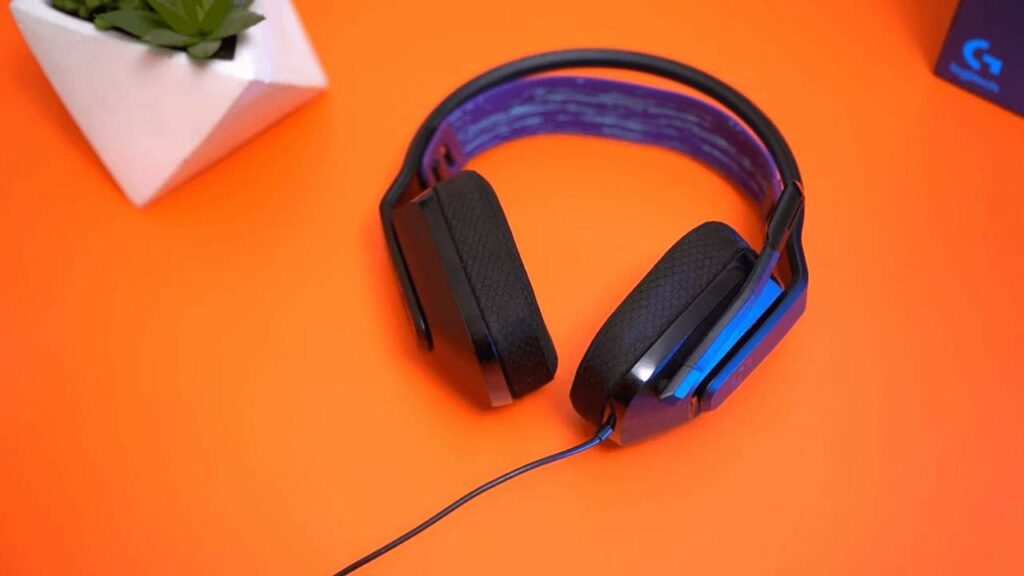 The Logitech G335 has had me change my opinion of it numerous times while writing this review.  The main reason for this is the fact that it is really tough to put the G335 in a category.  If you see it as a gaming headset category then it might feel bareboned and not quite able to keep up with pricier and beefier headsets.  I think the G335 belongs in the lifestyle section as it is a very easy plug-and-play headset that is perfect for entry-level gamers as well as non-gamers who simply need a decent lightweight headset that is perfect for extended sessions of use.  The super lightweight build will be very attractive to some but personally, I prefer having something more substantial in weight.  The audio that is focused more on the higher spectrum is great for online meetings and casual shooter games but might remove some immersion when playing RPG’s etc.

For these reasons, I think the Logitech G335 should be very high up on anyone’s list when looking for a budget-friendly headset that is still capable of delivering a satisfactory audio experience when you want to just straight out of your Zoom meeting and into a lobby of Warzone with your buddies.

special thanks to Logitech South Africa for the review content