Recently, the headset market has had a significant shake-up in terms of what is expected and who the target market truly is.  In the past, headsets were for gamers only.  you would simply need to cater to PC or console players and provide the best while having some crazy design so that your headset would get noticed.  Since Covid-19 all of this has changed.  The vast majority of people, that is still with a job, now have to do all their work from home and sit in on crazy amounts of virtual meetings.  This means spending a lot of time in front of your computer and even more time with a headset on.  For those who are not gamers, wearing a headset for extended periods of time might feel very uncomfortable.  Fortunately, Logitech has once again been able to take what they are so good at, and make a headset that perfectly blends the brilliance of their daily office equipment with the quality of their gaming peripherals.  Time to take work and play to the next level.  Introducing the Logitech G435.  Built with inclusion in mind! 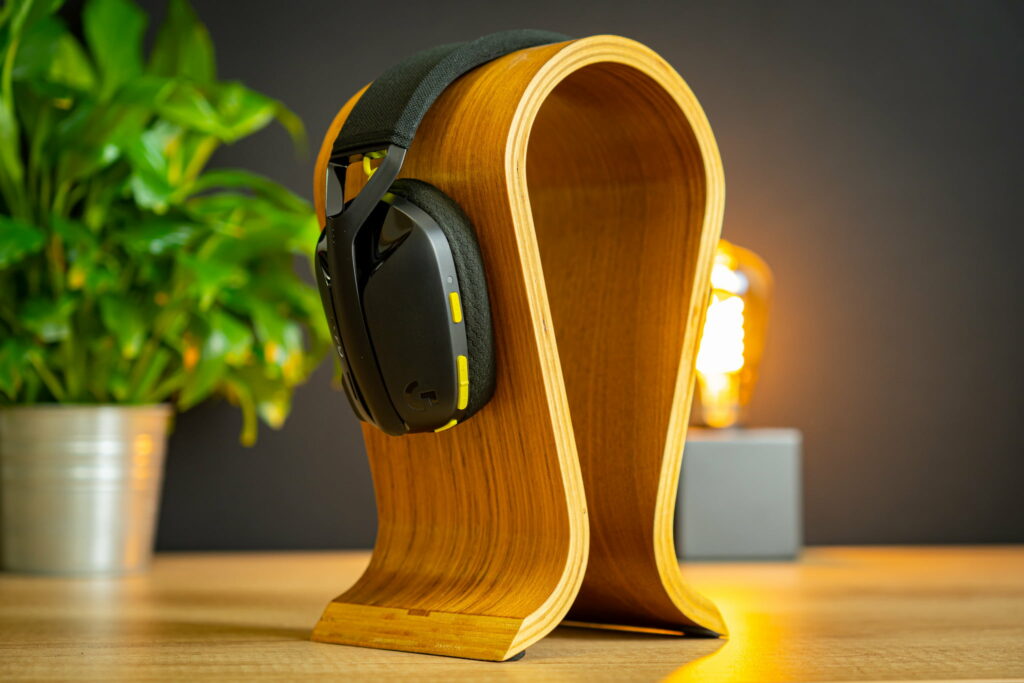 Logitech has erred on the side of caution when it comes to the design of the G435.  Following the general design of the G series headsets that have enjoyed massive fanfare across gaming platforms, with design cues and features that are alike.  The Logitech G435 features soft memory foam cups, that, in my opinion, are the perfect combination of lightweight and breathable while blocking out enough ambient noise when using it in a personal environment.  One of the truly unique aspects of the G435 is the extremely lightweight design, and with a frame that can easily be forgotten that it is even on your head, makes the G435 a great headset if you need to wear it for extended periods of time.  The medium-sized earcups can not only slide up and down on the frame, allowing for a snug fit for nearly all but there is even a hint of a swivel which is not often seen in headsets that are designed like these.  The headband does offer very little in the sense of padding but when the headset weighs a mere 165g then you don’t need much padding to feel like it’s floating on top of your head.

The Logitech G435 features two ways to connect to your favorite device, be it a mobile device, PC or console.  First up is the legendary Logitech lightspeed wireless technology that offers a low-latency connection to any device that is compatible with the USB dongle.  The second option is to connect via Bluetooth, which is great for consoles and mobile phones, and tablets.

When it comes to the audio, the Logitech G435 is fitted with 40mm drivers, which might seem on the smaller side, but thanks to Logitech and their great tuning, punches way above its actual weight and delivers solid and strong mids and highs while maybe sounding slightly weak on the bass tones, having more dense earcups might help give the bass some more kick.  A new feature of Logitech headsets is the inclusion of beamforming microphones.  fitted to the left earcup the beamforming microphones are not quite in the league of the Blue voice boom mic that the G Pro X headsets are fitted with but they do a respectable job nonetheless.  The microphones that are fitted within the earcups do an admirable job of picking up the wearer’s voice even in partially noisy environments. 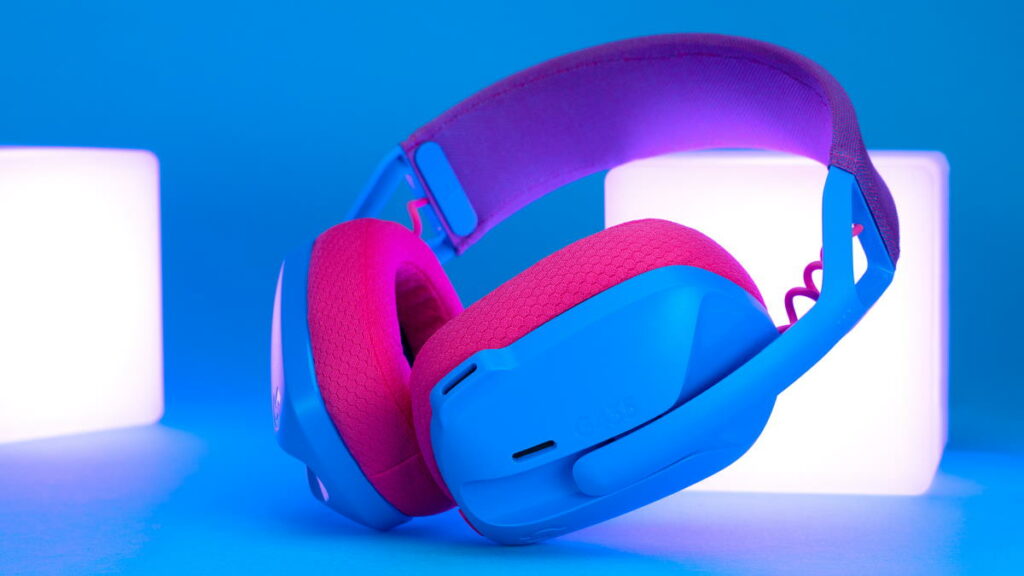 On the outside, the Logitech G435 features an embossed G435 on the right ear and the expected Logitech logo on the left.  Furthermore, all the controls are on the left ear.  Working from the top of the left rear earcup rim, we have  LED to indicate power status as well as power on or off.  Right below the LED is the actual power button that, when pushed gives you an audio tone to show that it is on or off.  Moving further down is the volume up and down controls which do take control of your device’s main volume when adjusted.  Last but not the least, there is a mute button which, when pressed and held, also activates an ear protection mode which ensures that the G435 max volume is limited to a point where no hearing damage can be caused when used for extensive periods of time.  The Logitech G435 charges via a USB-C cable and Logitech claims that battery life should be good for a respectable 18 hours of use. 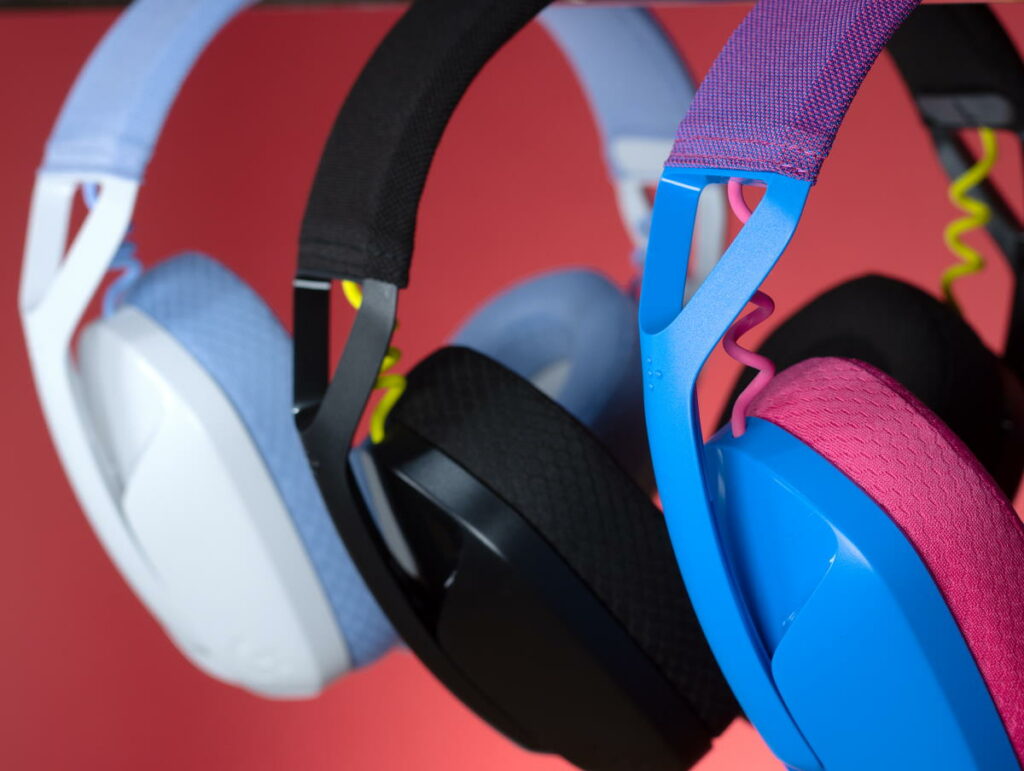 The Logitech G435 is extremely lightweight and that is wonderful for those who plan to wear it extensively.  But it comes with a flipside.  Being light generally causes the item to feel less durable.  Logitech has proven that their products are very capable of standing the test of time and torture.  The G435 does feel more fragile than some other headsets but if treated correctly I don’t see it falling apart without some heavy-handedness.

Coming from my personal G Pro X headset, it took some time to get used to the extremely light G435.  After some time I had to feel and check if the headset was still there.  It is extremely light and the clamping force is near perfect making you feel like you are not even wearing a headset.  I spent significant time watching series on Netflix and playing Life is Strange: True Colours as well as some fast-paced shooter action in the form of Warzone.  The Logitech G435 handled most audio situations really well.  When watching quieter scenes from movies and series the voices would carry really well while the low bass would not muddy the crystal clear mids and highs.  Life is Strange is already an extremely engaging game and thanks to great audio it pushes the immersion even further.

When I was playing Warzone by myself I found myself actually hearing the other players better with the default audio settings of the G435.  As it is aimed at mobile and ease of access across platforms the G435 does not utilize the GHUB in any way, so what you get out of the box is what you get.  Fortunately, that is still very good.  What I really appreciated about the G435 is how even though it only boasts a 40mm driver it is able to distinguish between explosions and gunfire without losing some of the quality and becoming very muddy.  The microphone while clear, does bleed a little bit of background noise but nothing to be concerned about.  My teammates did say I sounded significantly further away from my mic when speaking, although comparing it to the Blue voice microphone on my G Pro X is not a fair competition.  The Logitech G435 does not come with any form of surround sound technology which is no problem, many games are designed to give directional audio even when using a stereo headset so it is no deal-breaker!  The Lightspeed wireless is as always top-notch, with great range and easy connection, and even walking to the room next door to take a much-needed restroom break, the G435 never skipped a beat!   Bluetooth is just as reliable and has a really strong connection which I never had a problem with. 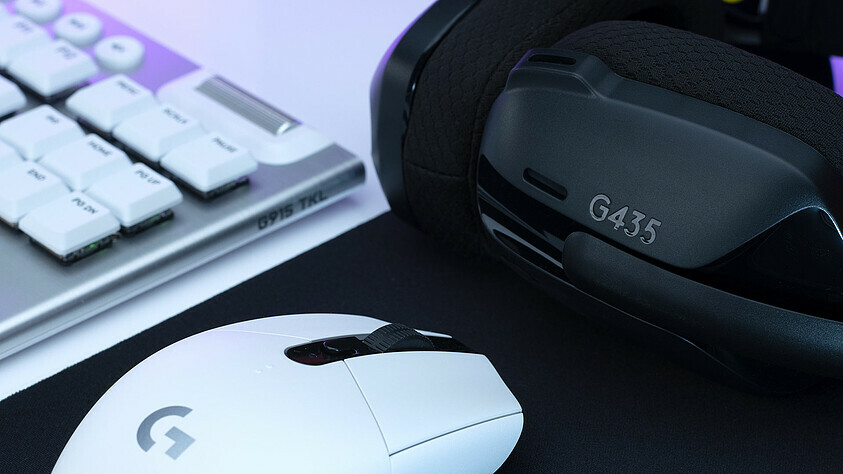 The Logitech G435 is a modest entry to a mid-range wireless headset that has its eyes firmly set on being more lifestyle-friendly with a modest design and super lightweight allowing for extended use.  The extreme lightweight does make the G435 very comfortable to wear but I would have liked to see slightly more padding around the earcup as well as the headband.  The Logitech G435 does also come in three color options, the one we have is the black and neon yellow accents.  There is also Off-white and Lilac and Blue and Raspberry.  A modest price tag of around the R 1 499 mark makes it a fair bit cheaper than the likes of the Turtle Beach Stealth 600 Gen 2.  The Logitech G435 does lack a surround sound feature but it is more than capable of jumping from work to play and even a gaming session with friends, without skipping a beat.  Very capable audio makes the G435 a very competitive all-around headset for someone who is looking for a headset that needs to be able to do it all!

Special thanks to Logitech South Africa for the review content