When the Mediabox Maverick (MBX4K) arrived on my desk I met it with slight trepidation.  I felt like I  had been burnt before with the Mediabox Ranger that ended up being a slight letdown due to not being android licensed.  I flipped the Maverick box over and searched for the certification right away.  I was met with the wonderful news that it was in-fact, certified, WIN!!!  For a really long time, I was content that I did not need a media box, my Xbox was capable of doing the job and when the Xbox was in use a simple NUC mini PC would suffice.  This is normal for most of us, why change, don’t fix it if it’s not broken.  Until you embrace the change and experience the true, easy, plug and binge, value of the Mediabox Maverick!

Opening the box of the Mediabox Maverick you are met with a surprisingly sleek and light.  Unlike many of the consoles, *cough cough* this little powerhouse is no eyesore and can easily be placed on your tv cabinet, and no need to try and hide it.  It is generally square with rounded edges and is generally the size of ones’ palm.  The little Maverick might be small in size but what lays underneath the hood is impressive.  On the side, it features two USB ports, one being USB 3.0 and the other USB 2.0.  As expected an HDMI out and an Ethernet input, some AV stereo jacks, and most surprisingly an Optical SPDIF output for those who want the best possible audio quality.  What all these ports mean is that you can link up quite a number of devices to this little powerhouse! 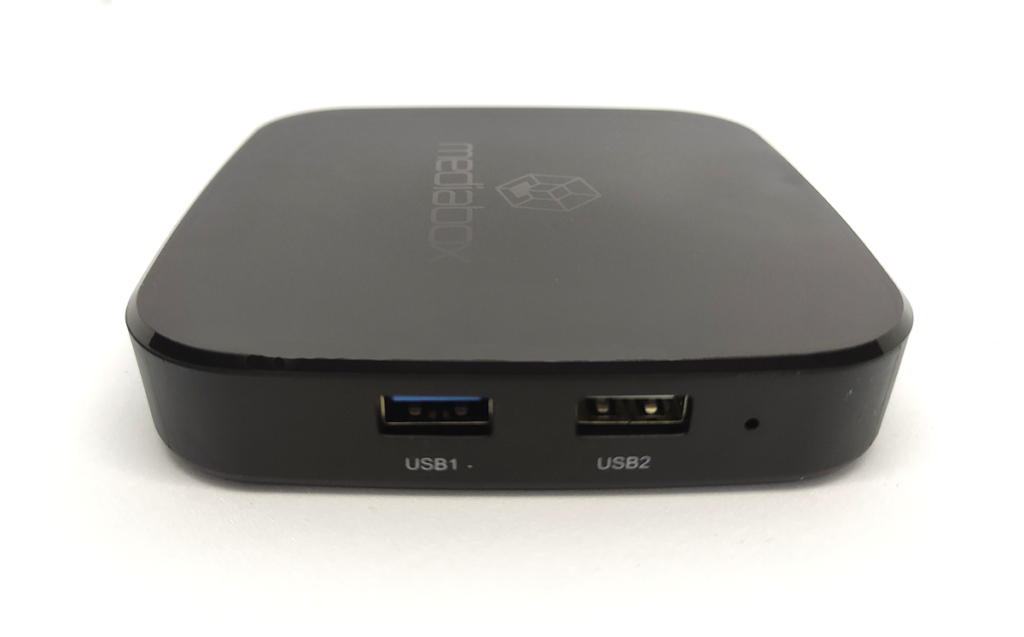 The Maverick comes with a new and improved remote from its predecessor.  Very similar in design but functionality, in general, just feels better.  the sleek and glossy remote fits comfortably in your hand and having dedicated buttons for Netflix, Youtube, Prime Video, and Google play has you hopping onto the couch and watching before you are even fully settled into your seat.  As if these shortcut keys are not enough you can also control the Maverick by voice using the Google assistant that, coming from a Siri user, is REALLY good and accurate in understanding what I want to watch.  Simply tell it “Open New Amsterdam in Netflix” (yes I watch New Amsterdam, don’t judge me) and the Maverick will have you covered! 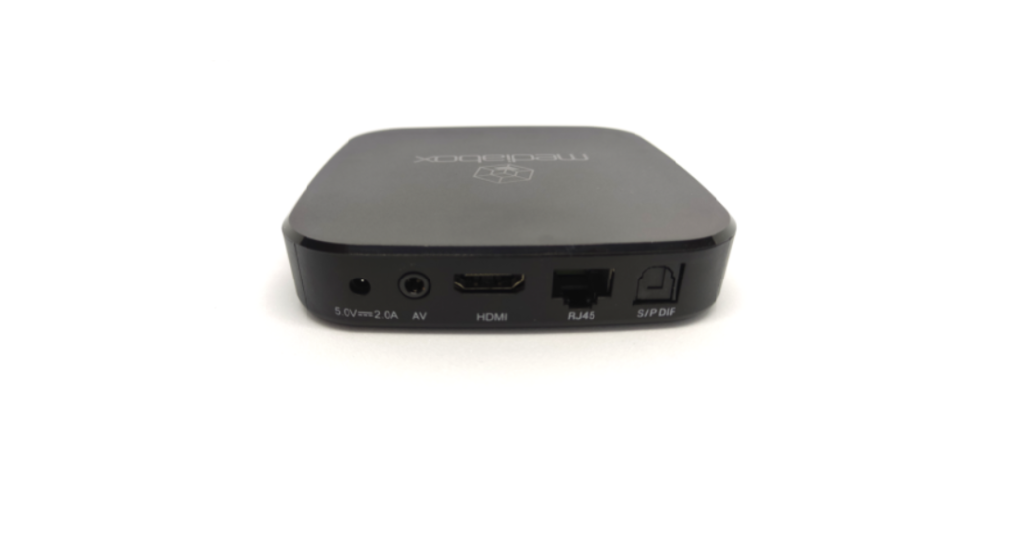 I am sure that most of you are more interested in how it works and how it performs rather than what numbers it has under the hood.  But for those who are interested, here we go!  The Mediabox Maverick features a 2.0GHz quad-core CPU and a Mali-G31 850MHz GPU, what that equates to is a device that runs Android 9 Pie OS while being able to effortlessly manage 4kp60 H.265 and 1080p60 encoders which will ensure that you can watch on-demand and live TV at astonishingly good quality.  I used the Maverick on my ancient 55inch Samsung Plasma and I have been contemplating replacing it for quite some time.  Thanks to the Mediabox Maverick I have a new love for my old TV and that is thanks to the crisp and colorful images the Maverick displays!   The Maverick is also capable of HDR and 4K videos so if you have the hardware that can display it, the Maverick can show it!

On the Mediabox Maverick box, they make a very bold statement, they say it’s hassle-free to set up.  This is no easy feat as some people are rather technologically challenged so to test Mediaboxs’ theory I decided to ask my wife to get our Netflix and DSTV Now up and running. I gave her the remote and left the room, couple of minutes later she triumphantly called to say its good to go, hassle-free setup, check! 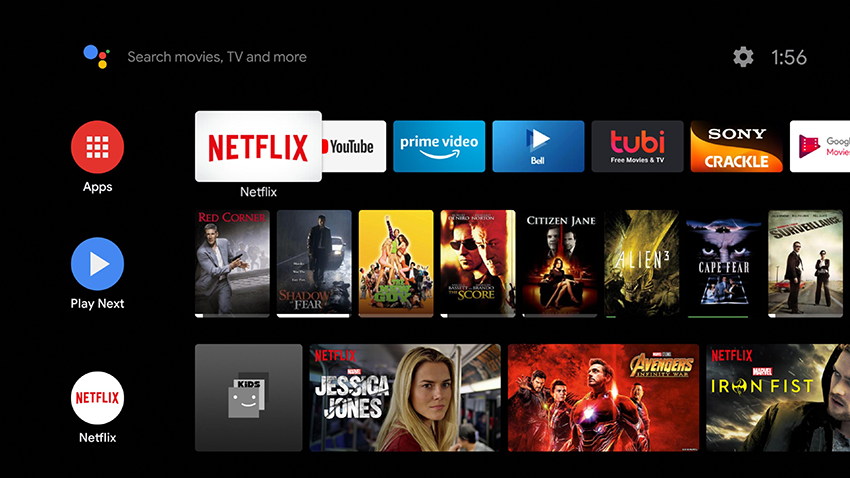 Those who have used devices that run Android TV before will find themselves right at home on the Mediabox Maverick.  Unlike many cheaper products, the Maverick UI feels premium and works that way as well.  It is minimal and smooth and very responsive.  From the home screen, where many apps are included straight out the box, such as DSTV Now, Spotify, Showmax, YouTube, RedBull TV, Netflix, and more, but if you still want more, adding any of the other apps are as simple as a few clicks.  Mediabox promises that the device is fully supported locally, which means if you had issues with installing or non-functioning apps ( I am looking at you Mediabox Ranger) you can contact the support and they can remotely install or fix problems you might have, or for those who put the “hassle” back in the “hassle-free” setup.  Chrome-cast is also built into the Maverick so if you are watching a YouTube video on your phone, or watching something on your PC, you can easily cast it over to the Maverick and enjoy it on a bigger screen.

During my time spent with the Mediabox Maverick, I spent a lot of time between Twitch, Netflix, Showmax, and DSTV Now and I could hardly find any issue apart from a single issue when using Netflix.  When in Netflix and watching an episode of any program, the volume keys on the remote don’t work, minimizing Netflix and volume up on the home screen works fine but then you need to navigate back, fortunately, Netflix picks up where you left off but this does get annoying but definitely not a dealbreaker!

Mediabox has learned from their “failures” that they had in the previous Ranger model and fixed all the underlying issues that it had.  What they have created is a Smartbox that I dare to say, is better than most!  I have always been a non-believer in smart boxes and after the Mediabox Ranger, I really thought my mind could not be changed.  But having the Mediabox Maverick and experiencing the ease of use I am genuinely able to say that this is an item that you most definitely need, you just don’t know it yet!  For the meager price of R1 499.00*  you can have a Smartbox capable of handling 4K with ease compared to a Fruit-related competitor’s device coming in at nearly three times the price!

If you are in the market for a Smartbox, and you are NOT considering the MEDIABOX MAVERICK then you are doing yourself, as well as your wallet, a real injustice!

special thanks to Apex Interactive for providing the review hardware

*price accurate at the time of the article