Games with Gold for September might be mostly notable for major titles like Forza Motorsport 5, with all of its extras and expansions, Battlefield 3, playable on Xbox One via Backwards Compatibility and then a lesser known title named OXENFREE.  I had not heard much about this title but me, being a sucker for a free game, decided to download it as it didn’t have a very large download size, and fired it up to give it a go before I pass judgement on what would most likely be a rather weak title.

When I fired the title up I went in with a blank slate, zero expectations.  That’s a good thing right? no expectations mean zero chance for being let down.  Boy oh boy was i pleasantly suprised!  What met me was a game with a very unique painterly art style that really tickled my fancy the moment it started.  What drew me in from the very beginning is the simplistic beauty yet when you dive a little further into the details you will find an immensely well fleshed out environment that  takes note of all that is needed. 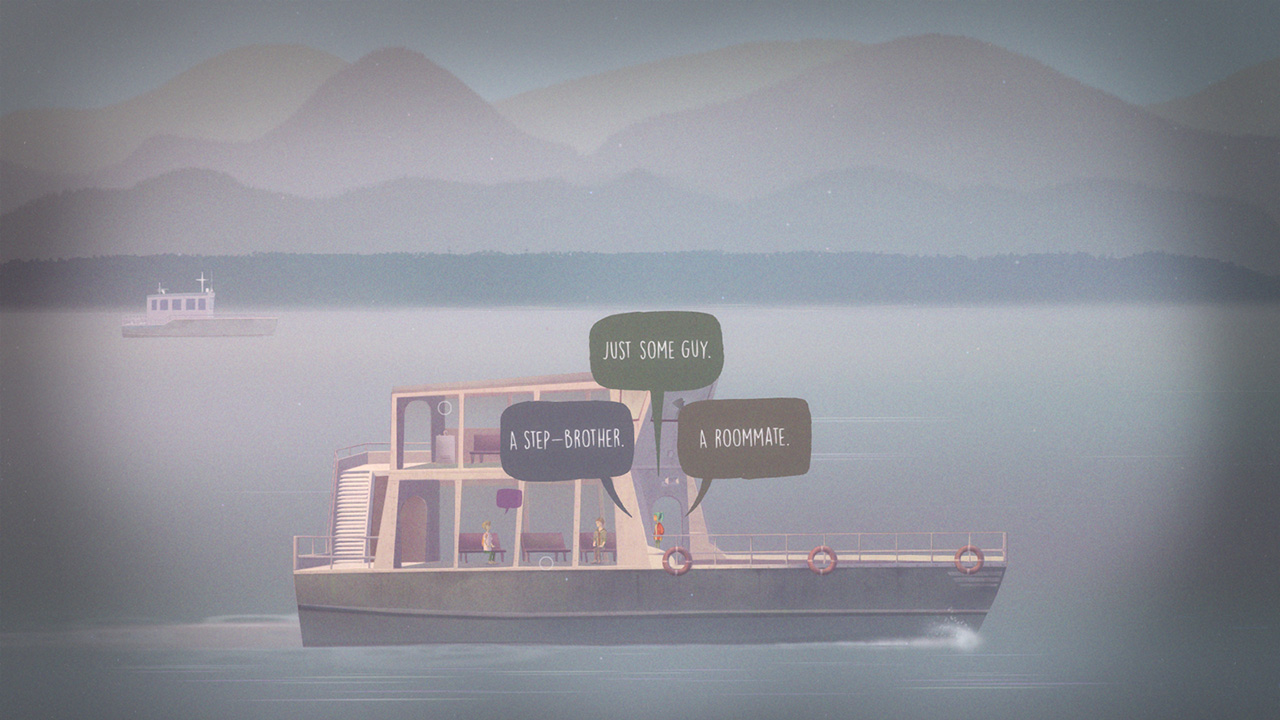 The setup for the game goes as follow:  “Every year in the small town of Camena, a group of high school seniors secretly spend the night partying on a nearby decommissioned military island.  This year the group includes you – Alex- and your newly introduced stepbrother Jonas.  You have just met up with your best friend Ren, his secret crush Nona, and Nona’s constant companion Clarissa to start the night off on the beach” 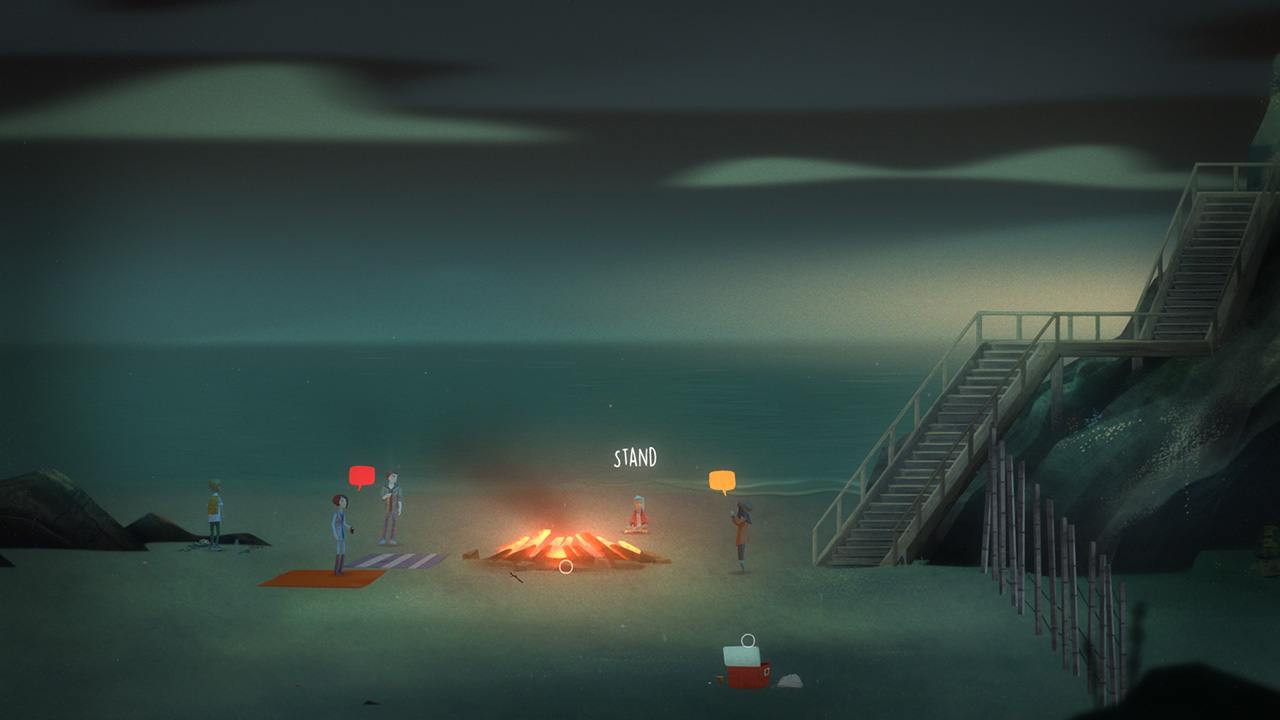 Yes I know what you are thinking it sounds like a cliched thriller but I promise you that these high school characters are not just going to be murder-fodder.  From the very beginning of the game the character development is constantly evolving.  during the first couple of minutes of the game I had found myself simple standing around on the boat where the opening scene plays out, listening to the characters chat about their lives as I grew to know them.  It was like being a invisible friend to the then, party of 3. 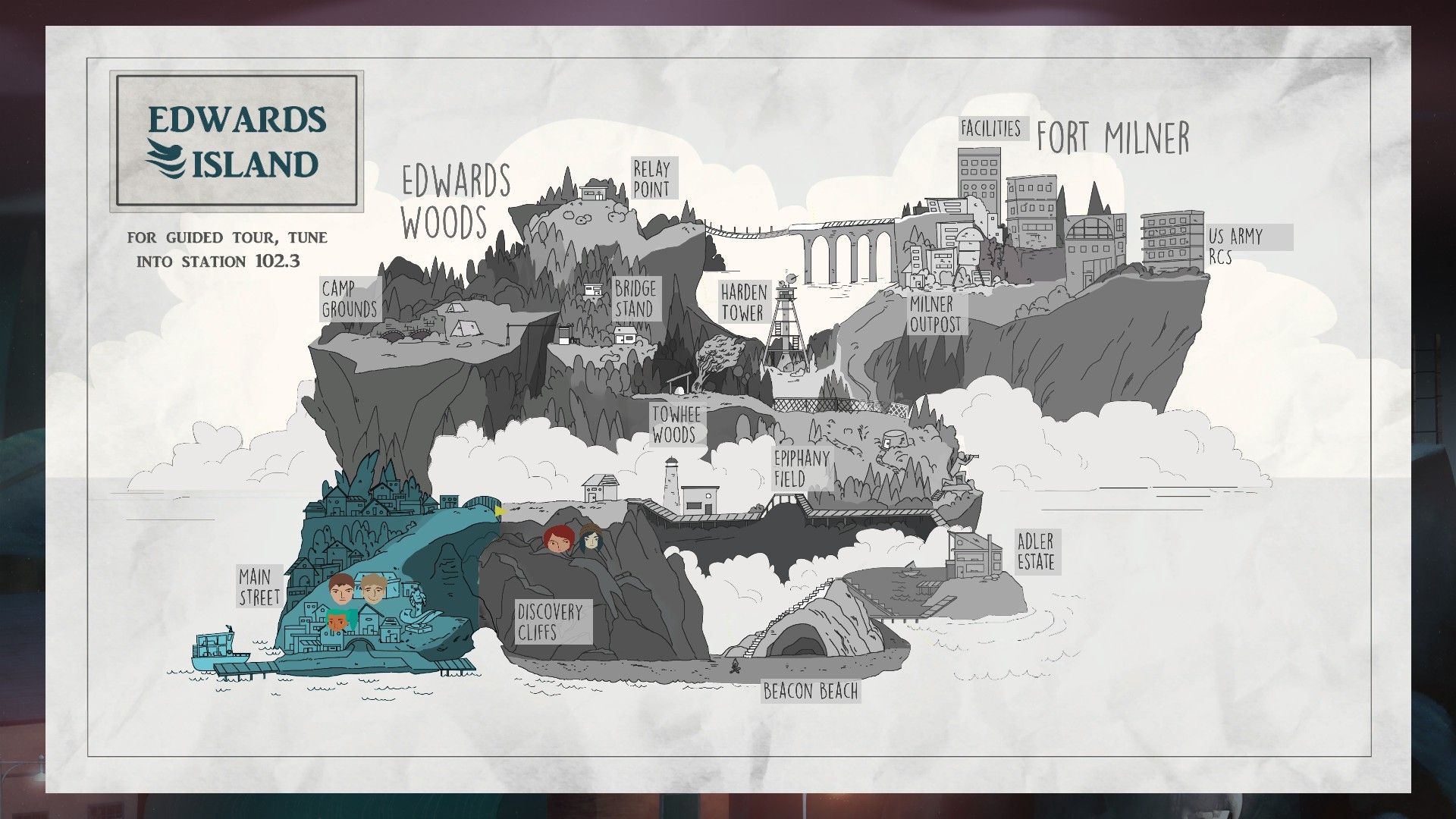 To say that the characters in Oxenfree are constantly chatting would be a understatement.  You play as a female named Alex, who can walk, talk, interact and even do some basic environmentally based puzzles if the need arises. You will also encounter ghosts that scare and threaten you but none of these things are really what define Oxenfree, it is primarily a game about conversation, and the heart and soul of this game is the speech-bubble interface.

During this 4 – or so hour adventure there is hardly a time that the characters are not constantly chatting, with that comes the need to pick Alex’s responses with the speed that you would expect in real conversations.  Oxenfree does not offer any pauses, much like real life, with constant banter between the characters with quick responses required from you to avoid the conversation moving on without you.  Not in a bad way that some games continue whilst assuming you have made a response and they go off on their next pre-programmed rant.  No, if you decide that your silence is a valid response to the last conversation the game will acknowledge that and so the game adapts.  If you were to interrupt someone mid-sentence they will notice that and react to that now, and in future conversations…

This whole concept might sound similar to the systems used used in Telltale and Bioware titles but this one is much more advanced and in depth than any of the aforementioned titles.  The speed of this system at work is what truly sets Oxenfree apart.  This feature while being the pinnacle of the game can also be the most frustrating, but in the frustration it shows you just how close to real life it is.  Not giving you time to deliberate a choice, forcing you to make quick, bold and sometimes silly choices that can and will come to haunt you.  What really hits this conversation mechanic home is the stellar writing nad strong voice over performances, expect ums, uhhs, incomplete sentences, thoughts and trail offs that don’t lead to anything in particular.  It really feels like you are speaking to actual human beings.  All of the attention to detail and meticulously crafted dialogue mechanic gives Oxenfree an immense story with alot of texture and depth. 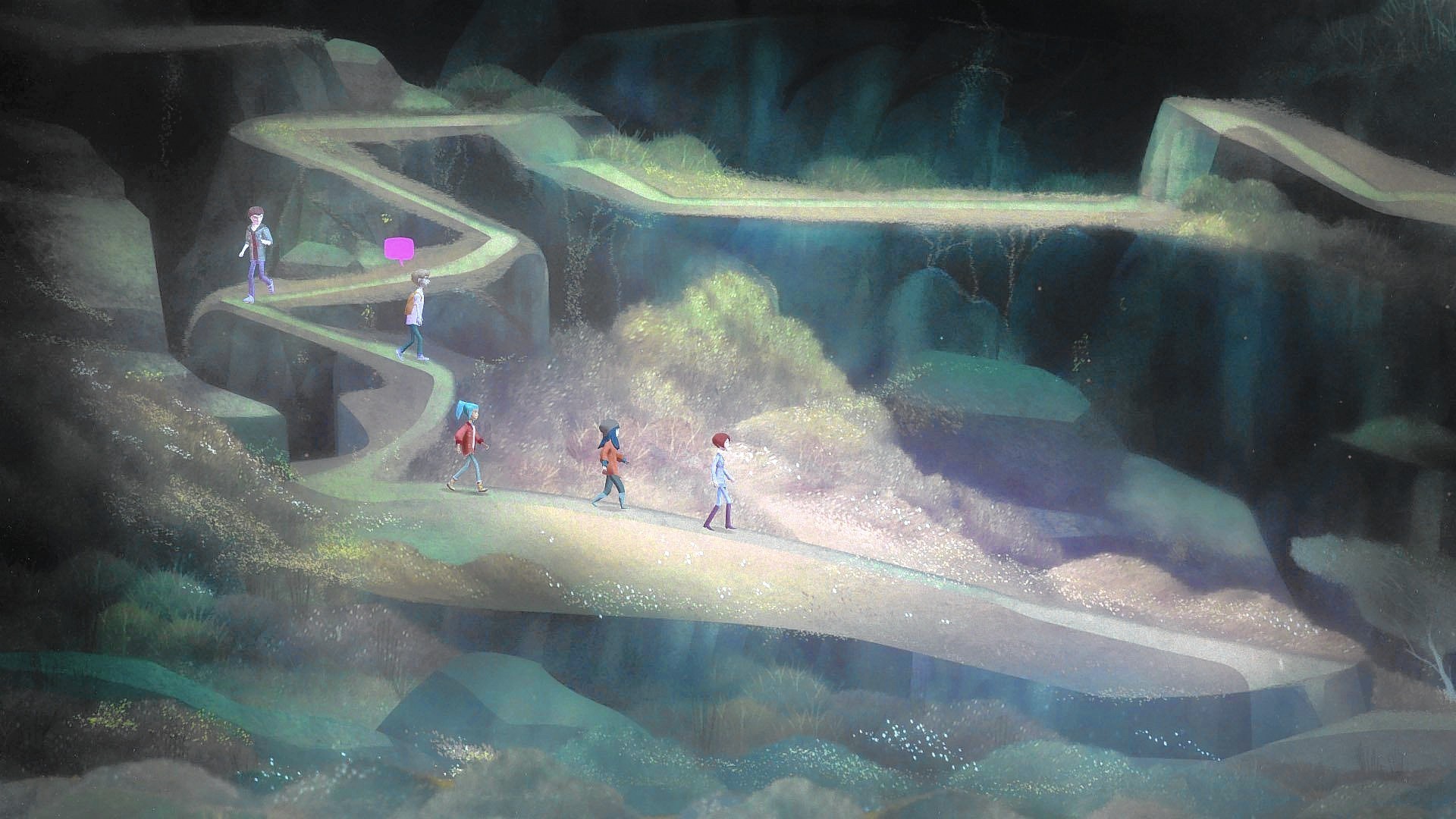 I know I have sung the praises of mainly one aspect of Oxenfree so let me try and digress slightly and give you some further insight into this title without giving too much away of what is to come.

Oxenfree has a supernatural aspect to it which I will let you discover for yourselves but there are certain spots on the island that you find yourself on where you can pull out Alex’s radio and tune into otherworldy frequencies.  This is where the supernatural scares will start to come in.  All the frequencies that Alex find, hint at the dark and twisted history of the island that had remained hidden for decades.  This game has you taming the supernatural forces, save your friends and trying to find the truth behind what really happened on the Island.

My personal opinion of Oxenfree would be that it is a really worthwhile title, if not for the interesting storyline or the beautiful scenery, then for the wonderful dynamics and mechanics that are at play in this game.

I have been quite the fan of titles like the Telltale series and games with similar mechanics but I can easily say, thanks to a little Indie Title called Oxenfree, none of the other games in this genre will be able to match this perfect little gem.  I certainly hope to see more from this studio in the future. 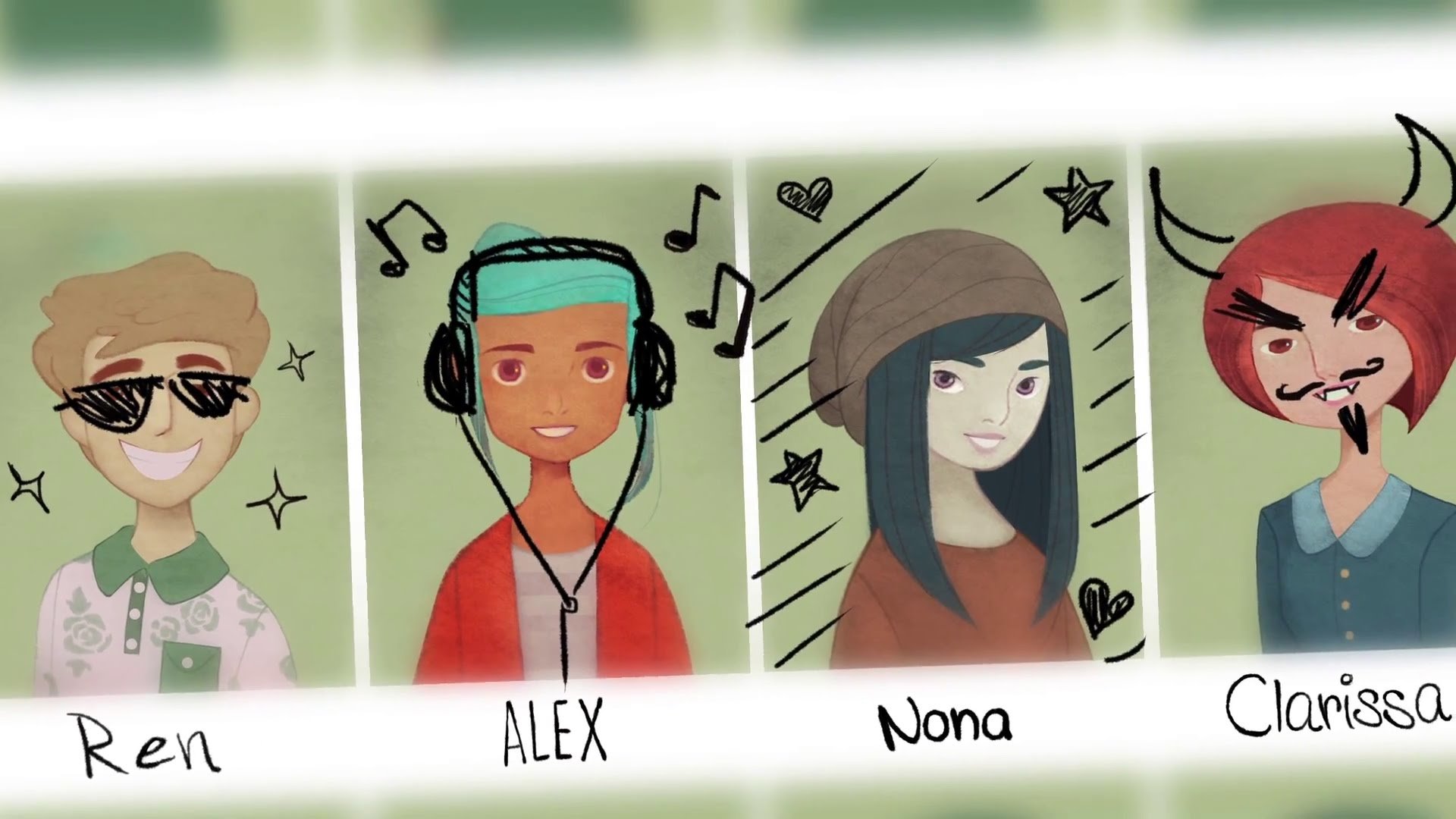 PrevPreviousUpdate 1710 is here, for some!
NextPath of Exile – ReviewNext