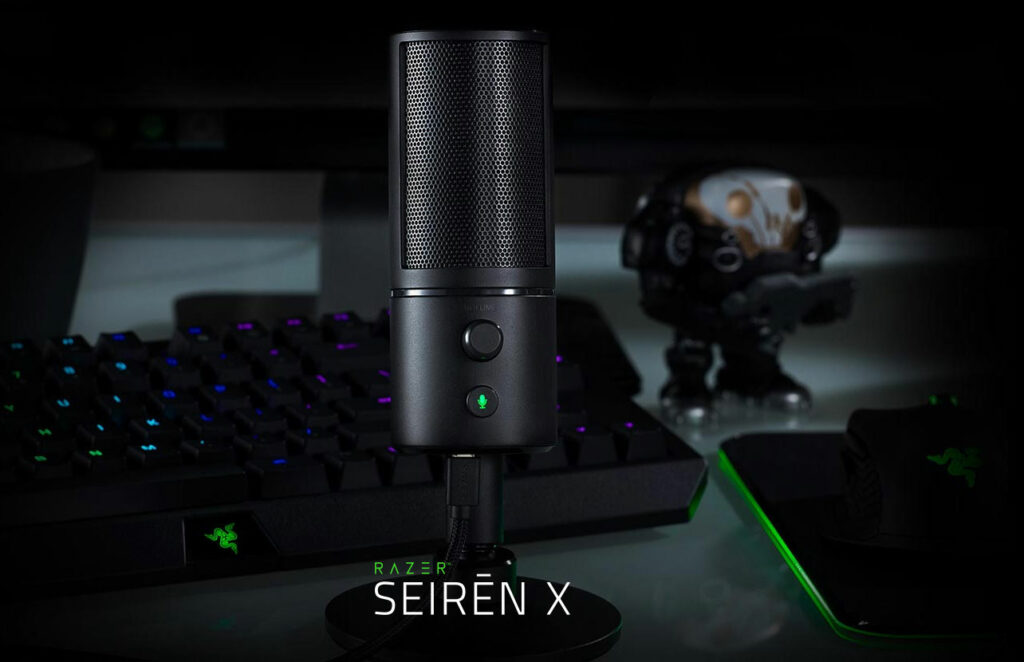 Streaming has become the latest craze, with popular streamers like DrDisRespect and Ninja becoming household names and earning money that can be measured in weight rather than value, many everyday-gamers want to do the same, stream their gaming.  But it’s not as simple as just pressing a button and begin to rake in massive amounts of money.  There are a few hardware additions that need to be made, namely a capture card, (which I will review in next few weeks), a good camera, and most importantly,  so that you can interact with your viewers, a good microphone!

For streamers on a budget in recent years the go-to microphone has been the Blue Yeti microphone, being the best bang for buck microphone in the section.  With the microphone section being a rather slow and stagnant section which doesn’t see monumental increases in technology through new models.  Razer decided they have had enough and targeted the budget market…  Say hello to the Razer Seiren X!

The Seiren X is built off the same core as the Seiren, which is a good starting point already, and with the main aim to dethrone the Blue Yeti, a price cut needed to be made, and as with any price cut, some compromises needed to be made to achieve this.  The Razer Seiren X is the perfect microphone for the on-the-go streamer due to its driverless setup.  Simply plug it into a USB port and it will instantly be recognized as an audio input device, easy as that!  The stylish shape and presentation of the Seiren X is perfect for anyone looking for a minimalist stream setup as well as a small unobtrusive microphone. 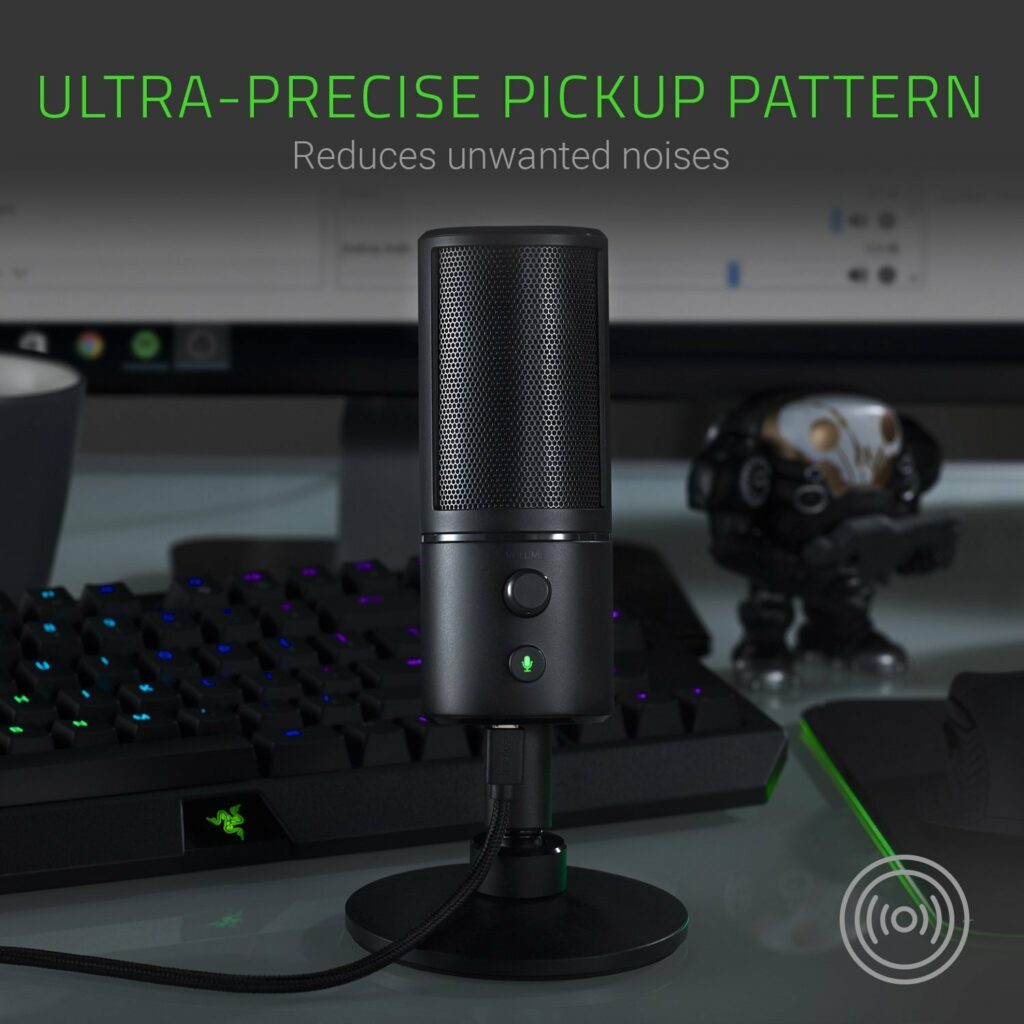 The Seiren X is really sleek and simple in its look as well as use.  Simply plug it into a USB port and you are ready, with only a volume knob and a mute button ( which will go red when muted) as well as a headphone input jack underneath, the Seiren X oozes simplicity!  The underneath headphone port allows you to plug your headset directly into the mic and broadcasting your audio through there instead of connecting straight to your pc/console.  One of the downfalls that go with cutting prices which means cutting features is that the Seiren X lacks the ability to change your capture modes, like the Seiren and the Blue Yeti has.  Luckily this does not hamper the ability of the Seiren X and many users of the Blue Yeti have made comparisons and opinions seem to be that the Seiren X works just as well without the option to change.

Razer has confirmed that the cardioid pickup pattern, for those not in the know: sound is only recorded from in front of the device instead of 360 degrees around like a traditional mic ) has been specifically adapted to ensure the most pin-point capturing to date from a cardioid setup.  The Seiren X also features a handy shock mount to ensure your recording or chat is protected from bumps and other sound anomalies that may occur during streams. 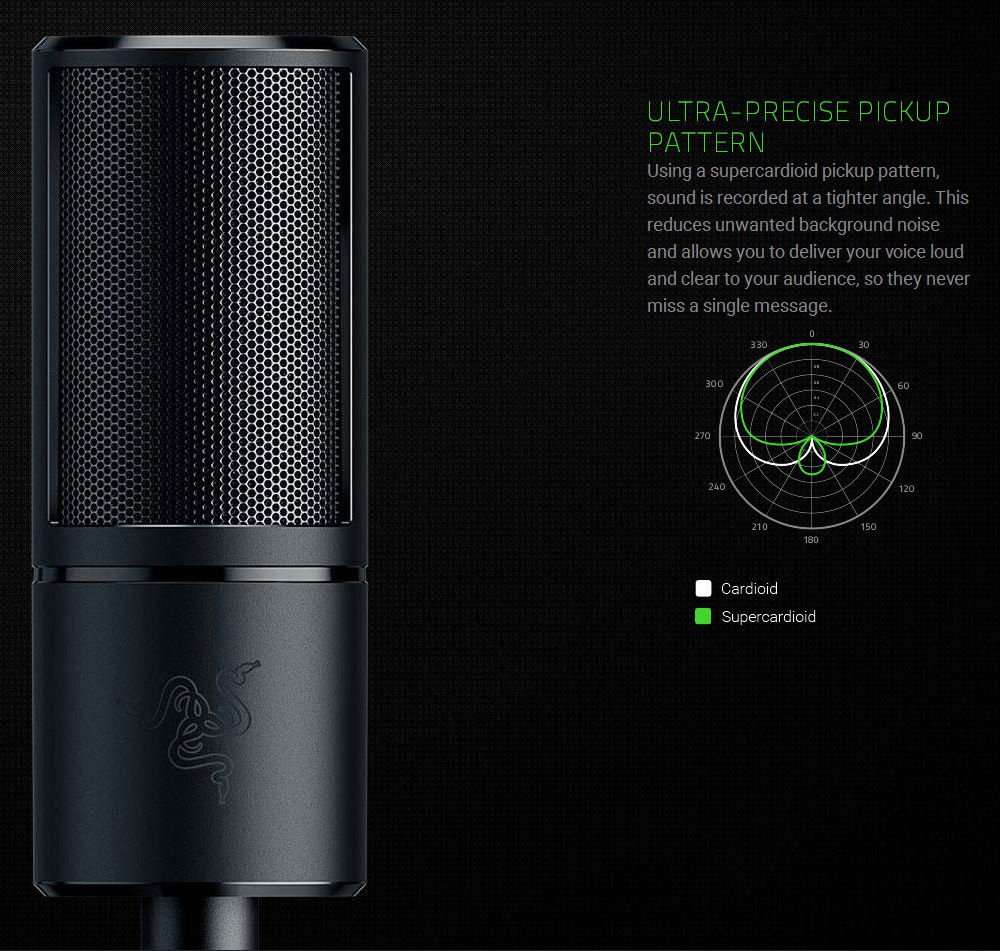 What makes the Razer Seiren X a very viable option for startup streamers or general gamers is the ease of use and setup.  During the review time, we used it predominantly during gaming sessions as party-chat microphone and the overwhelming response from fellow party members was that they could not believe how crisp and clear my voice sounded, even with the mic being at least 0.5m away from where a traditional headset mic would sit the voice clarity and volume was amazing.  It is good to state that when using a mechanical keyboard the clicks from the keys can often be picked up by the mic if placed closer to the left side of the keyboard.  Other than that the Seiren X is amazing!  Not being a streamer myself, I have never considered buying a loose standing microphone until this review item came my way.

The Razer Seiren X has bridged the gap and has brought competition to the entry-level section of streaming mics.  Between it and the Blue Yeti, all streamers should be able to find a microphone that caters for their personal needs.  If you need something easy, and quick to use the Seiren X is your go-to microphone.  If you want more options and capturing customization the Blue Yeti will be your weapon of choice.  Both are well priced and both task them or their jobs spectacularly!

special thanks to Apex Interactive for supplying review Hardware