With quality products in headsets, keyboards, mice, and controllers, it’s no wonder Razer is a name that has been a heavy hitter in the gaming community for many years.  And now even branching out into mobile phones, fashion, and other areas!  Razer definitely is a gaming brand that knows how to make a statement.

With Razer’s range of Wolverine elite tier controllers for Xbox consoles, Razer has been demolishing the competition in design and function, while giving the gamer a good-looking piece of tech that feels good in their hand.

The V2 Chroma is not Razer’s first rodeo, but it is their second version of the Wolverine Ultimate controller which is Razer’s leading controller – until the V2 Chroma.

As mentioned, the Wolverine V2 Chroma, from Razer, is a redesigned and improved version of the Wolverine Ultimate.  Not to be confused with the Wolverine V2, which is a simplified version of the Wolverine series.  At first glance, the differences between the Ultimate and the V2 Chroma are easily spotted.  Whereas the Ultimate followed the more traditional design of the Xbox One controller, with the V2 Chroma, Razer has opted to put comfort and ergonomics at the forefront of their controller design and layout.
In this, Razer has used a modified L-shape handgrip with non-slip rubber grips to keep the controller snug in hand in even the sweatiest of moments.  This new design is apparent in the rounder, more built-up look of the handgrips.

Following the look of the controller, Razer have opted to move the placement of it’s RBG lighting strip from around the Xbox logo, to 2 neatly placed strips dividing the face of the controller from the handgrips. These strips can be customised, and different lighting options can be saved to give you your desired look for your controller.  Overall, the movement of the RGB has taken the wolverine controller away from the space-age, edgy look of the Ultimate into a more refined and elegant look with the V2 Chroma.  Additionally, the V2 Chroma is available in both a black and white version to blend in well with whichever version of the Xbox you have.

The Wolverine V2 Chroma also offers the gamer Razer’s full arsenal of 6 additional multi-functional buttons to customise the gaming experience and keep your thumbs where they’re meant to be, on the thumbsticks.  These extra buttons consist of 4 additional triggers on the bottom of the controller, just inside the handgrips, and 2 additional bumpers on the inside of the traditional RB and LB buttons.  All of these can be remapped and configured using the Razer Controller Setup Xbox app and different pre-sets can be saved to allow for easy changing of functions between the games that occupy the shelves of your game library. 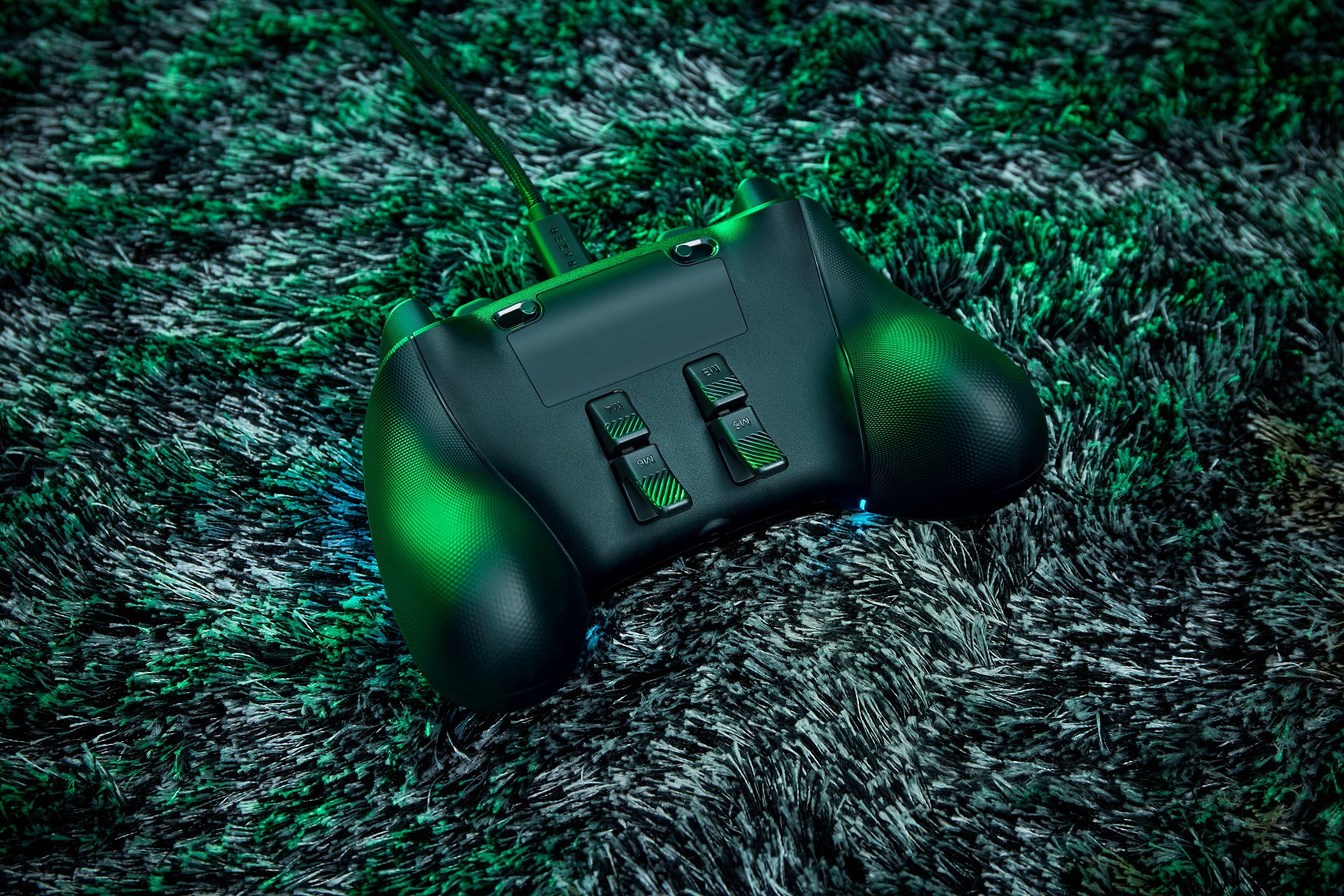 Razer have used their patented Razer Mecha-Tactile buttons for the action buttons and d-pad on your controller.  This is similar tech to what can be found in their range of gaming mice.  The Mecha-Tactile buttons boast a 3 million tap life cycle and an actuation of only 0.65mm to allow for quicker response time and increasing that all important K/D ratio.
To boot, the triggers of the of the V2 Chroma have stop switches to give you hair triggers for quicker response and action time while ADS and firing, or a longer response time for that perfect control on the accelerator.  This can be easily switched on and off on the individual triggers to give you the experience you’re looking for.

Additionally, the V2 Chroma comes with 2 interchangeable thumbstick caps to further shape and customise your overall gaming experience.  These can be easily switched out thanks to a snug magnetic fit that makes it easy to pull out but holds strong enough that there’s not wiggle or shift while in use.  These additional caps can be used in tandem with the default sticks or with each other, the choice really is yours.

The controller also features 2 additional buttons for easy game recording and sharing to flex on your friends for the awesome kills you are getting, happily powered by your V2 Chroma.  Razer has also opted to remove the audio control panel from the controller which, in my opinion has given the V2 Chroma and crisp and clean finish and looks a lot better.

All this customisation and control is powered by a 3m long braided cable with strain relief.  Being a wired controller might have some of you immediately eliminating the V2 Chroma from the list but the length of the cable gives you more than enough freedom to sit where you want and also ensures that you don’t have to manage your battery levels and can really get stuck into the action with full confidence in the gaming gear.

Having had first-hand experience with the Wolverine Ultimate and being able to use them side by side to really feel the difference, I can safely say that the V2 Chroma is a big improvement on the Ultimate.  Razer have really outdone themselves in their research and development of this new flagship controller of the Wolverine series and have created a controller that is not just what the gamer wanted, but what they needed.

The V2 Chroma is comfortable in hand and, even after hours of intense head snapping in Halo Infinite, the controller remained light, and fatigue was not evident.  The new ergonomic design distributes the meagre 270g weight of the controller evenly throughout your hand so that no one area feels it more than the next.

The placement of the additional triggers and bumpers requires a bit of an adjustment and getting used to if you’re coming from a standard controller but once you’ve made the adjustment, it feels like a hot knife in butter.  Even with my bigger hands, I didn’t feel cramped for space, and my wife with her smaller hands didn’t feel the need to stretch to reach the buttons.

Having used a variety of different combos of the thumbcaps, my preferred arrangement was the short, rounded thumcap on my left stick, controlling my movement with fluidity, and the long thumbcap on my right stick, giving me that little more control over my aim. This configurement (I used it, therefore it now exists as a word) was suggested to me by a friend who has used the Wolverine Ultimate for some time and, I must say, I could really feel the difference it made to my playing experience and overall control and movement, after a little settling in period of course.
I also found all the buttons to be highly responsive and strangely satisfying to press (just me? Sorry) and battled to go back to a standard controller feel.

The Xbox app to set and customise your controller was also super easy to use and really does add a whole plethora of options to up you’re in-game experience, as is expected from an elite tier controller of the Wolverine.  These options include adjustable settings for button assignment, lighting effects, motor vibration, and sensitivity clutch.  All adjustments can then be saved and named for specific games for simple flicking between and not having to go through the arduous task of fine tuning everything again for each game.

One small thing that did take some adjusting was the native stick sensitivity of the V2 Chroma.  After switching from my default controller to the V2 Chroma, I noticed how much more sensitive the stick where and often had to quickly adjust this either in-game or through the app.  This won’t be a problem for you if the V2 Chroma is your go-to gaming controller.

In terms of pure function and form, the V2 Chroma is a definite leap forward from its predecessor, and a solid competitor to all other controllers in its class.  The added features and improved design on its basic functions will definitely improve your skill and experience as you learn to wield this mighty beast and make it one with you.

The Wolverine V2 Chroma, however, is by no means a cheap controller with the retail price coming in at around the R4000 mark on Takealot at the time of writing, but this is still cheaper than some of the other elite tier controllers that the V2 Chroma competes with.
Is this controller worth the hefty price tag? If you have the money or are a competitive gamer looking for that edge – then yes, but for your average run-of-the-mill gamer, it is a hard pill to swallow for a few extra kills and a couple less deaths in a game.  But that decision is up to the buyer and is hopefully well informed by this review.

So, we award the Wolverine V2 Chroma from Razer the following scores:

Overall – we loved the controller and can’t find fault with it and think that buyer’s guilt will quickly be overcome with sheer joy and pleasure as you make use of this incredible piece of gaming gear.

A big thank you to the legends at Apex Interactive for giving us a chance to review the V2 Chroma!