Intel’s new 12th generation of CPUs, named Adler Lake, for those interested, have once again changed their socket.  The 11th generation CPUs used the LGA1200 socket and with the 12th generation, they have gone to LGA1700.  The increase in number is due to the increase in pins.  But thanks to a new socket, manufacturers have had to create a new range of motherboards.  Thanks to Gigabyte, we have been able to upgrade our setup with a new Gigabyte Z690 Gaming X motherboard. 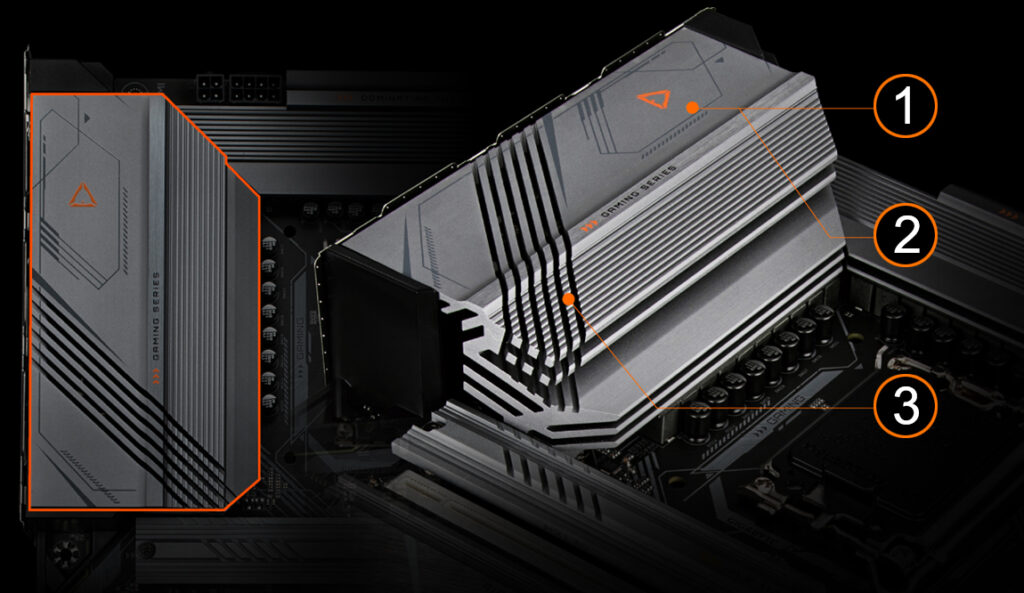 Taking a look at the Gigabyte Z690 Gaming X motherboard as a whole, we are met with a good-looking board.  The board is predominantly black with the heatshields having a nice gunmetal grey finish with some writing and markings to signify the Z690 version as well as some Gigabyte branding on it.  Personally, I love the look of the Gigabyte Z690 Gaming X motherboard as it is sleek and stylish while not drawing too much attention at the same time.  The perfect type of board if you want to show off your eye-catching Aorus cooler or GPU.  Or if you want to build a low-key monster PC that is not supposed to be eye-catching, yet eye-wateringly fast!

First things first, the IO backplate, which is a loose item on many motherboards, is a fixed and fitted feature of the Gigabyte Z690 Gaming X motherboard.  Personally, I don’t mind this but it is worthwhile mentioning for those who might see this as a problem.

The IO might not be as crammed full of ports as some of the higher spec’d board but there is still plenty of everything you might need.  The top row of the IO is fitted with four USB 2.0 ports.  Moving down a bit, two more USB 3.2 is at your disposal.  Rounding out the ample USB ports is three more USB 3.0 ports as well as a USB 3.2 type-C.  With a total of nine USB ports on the IO, you are sure to have enough for any setup.

If you are not using a GPU, the onboard graphics are interfaced via the normal HDMI port as well as a Display port, nice touch providing both for those who use monitors with only one or the other inputs.

Lastly, there is the 2.5GbE LAN connector, as the Gigabyte Z690 Gaming X motherboard does not offer WiFi.  Last but not least is the audio.  If you have capable hardware you can use the optical output straight from the motherboard, otherwise, you can use the provided 3.5mm jack for both output and microphone input.

Taking a look around the Gigabyte Z690 Gaming X motherboard we first note the extremely large, and prominent heatsinks which run from the IO all the way across the top of the board covering the VRMs as well as providing maximum heat spread and dissipation.  Compared to my previous Z390 board, the power plugs, 8pin + 4pin, are not situated together at the top left, neatly tucked away, and nearly hidden by the heatsink.  The standard CPU fan and pump headers are found to the right top. 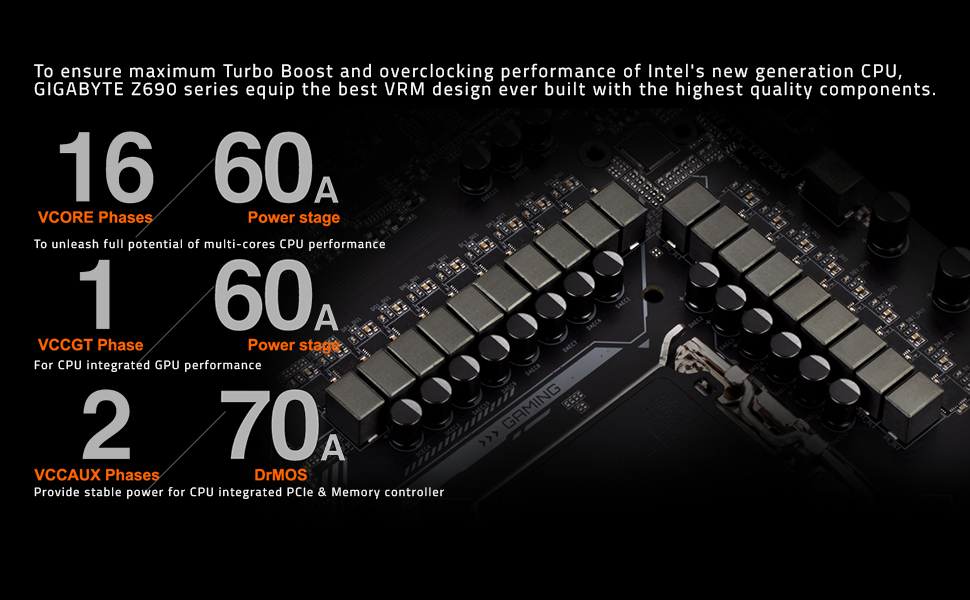 The Gigabyte Z690 Gaming X motherboard features tough and premium components as well as being PCIe 5.0 ready which is great for future-proofing your system for future upgrades.  The version of the Gigabyte Z690 Gaming X motherboard we have is the DDR4 version, so we have dual-channel DDR4 with 4 DIMMs.  These channels are also XMP compatibles so be sure to overclock your RAM for maximum performance.  On either side of the RAM DIMMs, you will find the LGA1700 socket that fits only the new Intel 12th Generation Adler Lake CPUs that boasts the new hybrid core setup.

Moving down the right-hand side of the board we have the standard 24pin ATX power connector but, on the rear of the top right side of the board, Gigabyte has included a strip of LEDs that can be controlled using the RGB fusion software.  This is great to create some ambient lighting inside your case. 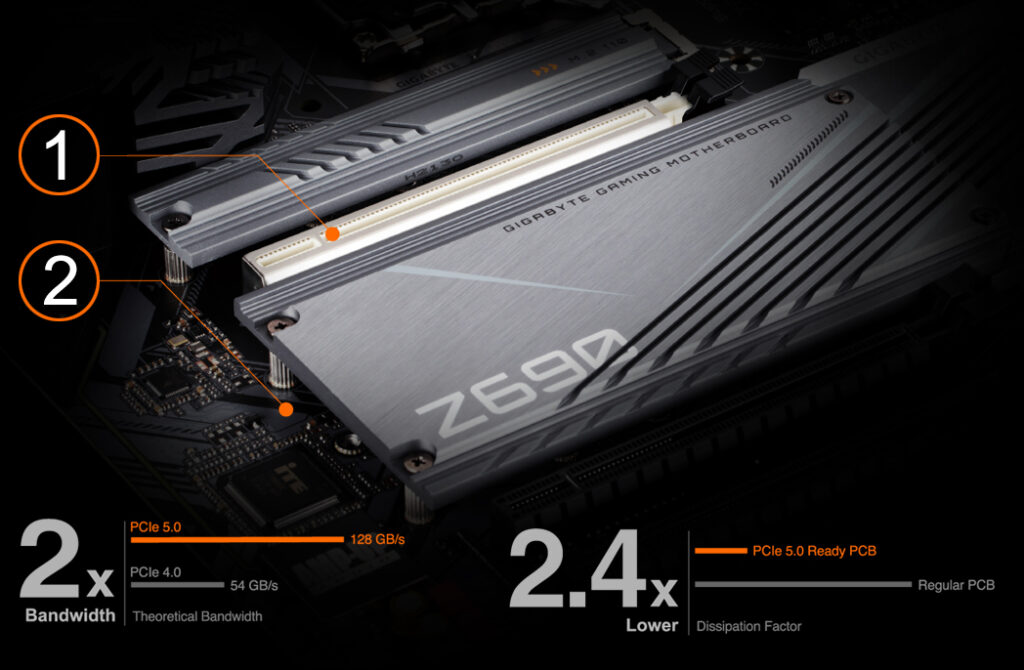 Further down, there is the first USB 3.2 header as well as a USB Type-C connector for more recent cases that have a Type-C connector fitted to it.  Sliding our focus over to the left, we see our first, of 4, M.2 PCIe 4.0 slots.  The first is hidden behind its own heatsink.  Moving past the first of three PCIe slots there is a large heatsink with the Z690 branding written on it.  This heatsink acts as a large cooling block for the three M.2 connectors underneath it. 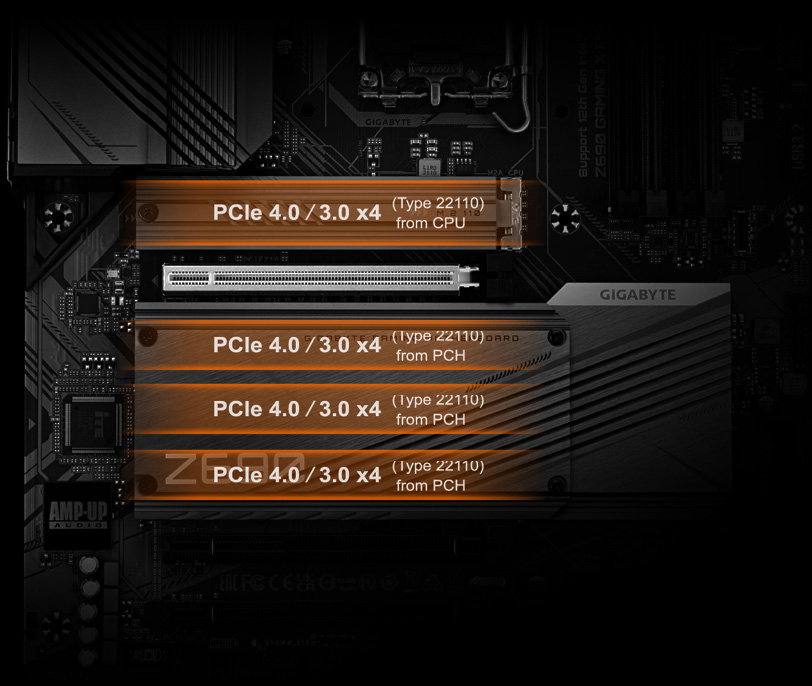 The Gigabyte Z690 Gaming X motherboard has six SATA 6Gb/s ports as well as plenty of fan headers, two addressable  LED strip headers, two RGB LED strip headers which are all situated along the bottom end of the board. A couple of USB sockets are also placed at the bottom.  Lastly, there is the audio chip.  The Gigabyte Z690 Gaming X motherboard is fitted with an ALC1220-VB audio chip.  This chip is great but unless you are using the optical output the audio can feel a bit lackluster at times.

As Intel introduces its new Hybrid technology, so too has Gigabyte given the new 12th Generation of CPUs an added feature built straight into the motherboard.  Intel is happy to tell us that its new P- and E-core setups will make multitasking and high-performance need much easier to obtain.  With E-Cores taking care of the more mundane, background tasks, giving the P-cores the task of only focusing on performance-based tasks.

for those who want to understand what Hybrid cores mean.

Thanks to Gigabyte’s “CPU Upgrade” profiles in the BIOS, you can now adjust between “gaming” and “max performance”.  Max Performance does what the name says, it activates both P- and E-cores to ensure full multi-core performance.  While Gaming Mode turns off the E-cores while ensuring zero compromises for gaming performance.  This mode can decrease CPU power usage by 20% while decreasing CPU temperature by 5’C.  Great for those who are struggling with high CPU temps. 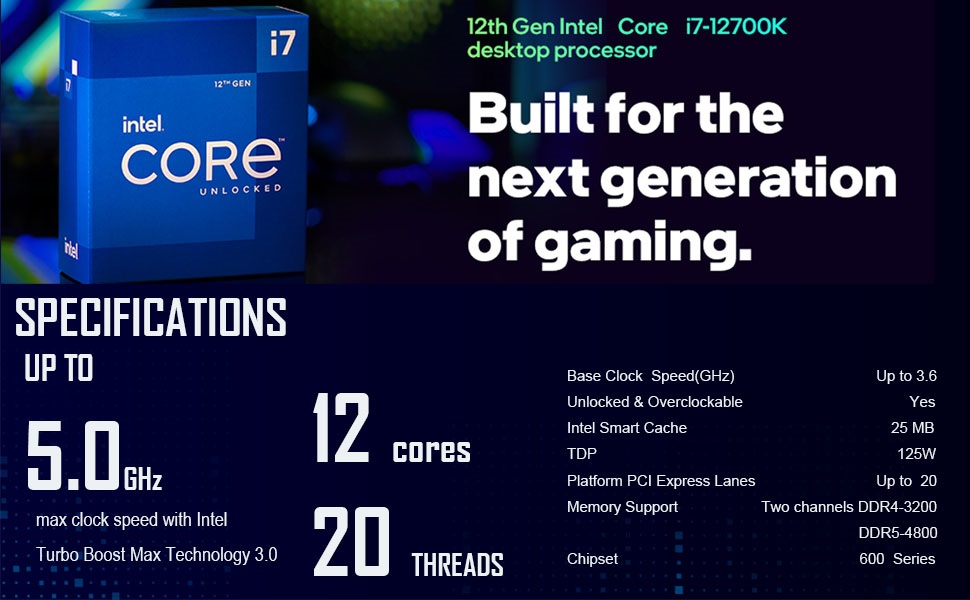 The Gigabyte Z690 Gaming X motherboard naturally comes with a few extra software to make your life a bit easier, and prettier!  The first of these is RGB Fusion, if you are an avid fan of RGB, then the name should explain what it is for.  You can use RGB fusion to control both the LED strip on the motherboard, as well as the RGB LED and Digital Addressable LED headers on the motherboard, if you have Gigabyte or Aorus RAM or GPU, all of their RGB will also be controllable from RGB Fusion.

BIOS interfaces can be tricky, especially if you are moving from one brand to another, or you generally don’t fiddle around in there too often.  Fortunately, the EUFI BIOS interface is very simple to use, there is even an EASY MODE, that simplifies things immensely. 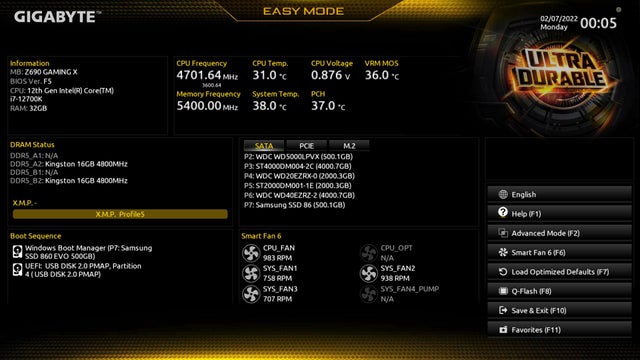 EASY TUNE is your one-stop app for all things tuning-related.  EasyTune allows for easy and safe adjustments to nearly every manner of your PC.  If you are interested in trying to overclock your PC in a safe, Windows-based environment then EasyTune has you covered.

From the moment the Gigabyte Z690 Gaming X motherboard arrived, along with the splendid Aorus Waterforce 360 and Intel 12th Generation i7 ( 12700K) I felt like a child on Christmas morning.  I had prepped myself as much as possible by removing every item I have and getting it ready for the new install.  The installation went rather smoothly.  The new CPU power plug position does make cable routing easy and I had my build complete and as neat as I wanted it within about an hour.

My setup is as follows:

During the Windows, the install is when I encountered my first slight hiccup.  Installing Windows onto my M.2 drive did not work initially.  After some head-scratching, I resorted to the dreaded “read the manual”.  In the manual, Gigabyte clearly states to download a certain driver and copy it to your boot drive before installing Windows.  This is something out of the ordinary, as I consider myself an experienced builder, but for those who are less experienced, and would generally follow the manual, you should have no problem installing Windows. 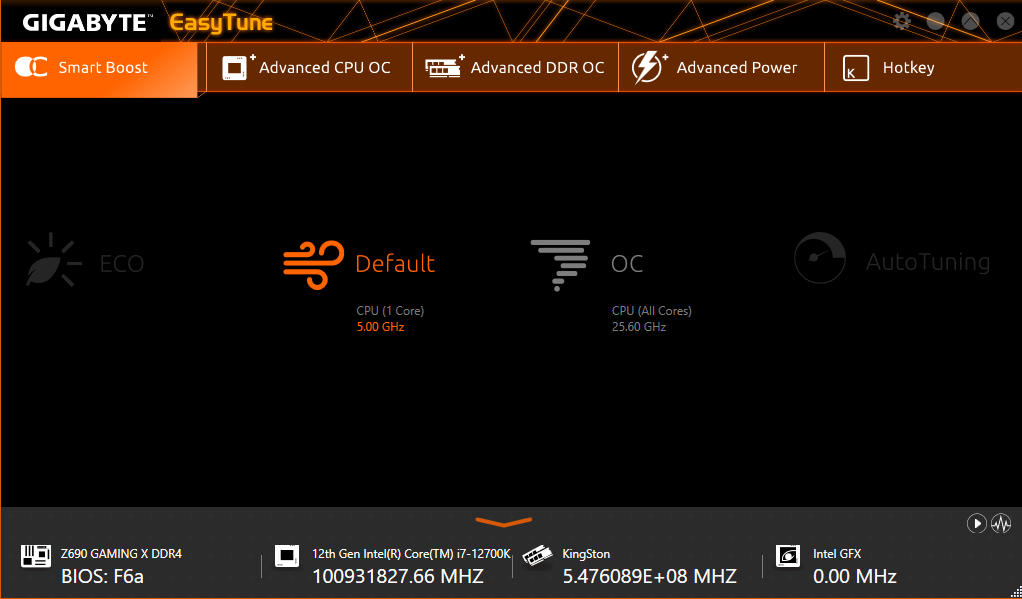 Another problem that I encountered was the issue with activating the XMP.  When I activated the XMP feature and rebooted, the system would go into a boot loop.  After many hours of reading and investigating, many sources advised on making sure the BIOS was on the latest version, etc, I found the only way to get it working was to remove two of my RAM modules, activate XMP, and then add those modules in again once the reboot was successful.  Strange, but fortunately it works.  While on the topic of XMP, Gigabyte has boosted their XMP for DDR4 to a whopping maximum of 5333MHz as long as your RAM is capable.

There will be many people that would say the Gigabyte Z690 Gaming X motherboard in its DDR4 version is somewhat of a waste, seeing as there is a DDR5 version on the market.  But for those who are strapped for cash, after purchasing a 12th generation CPU, and don’t have money to purchase the very expensive DDR5 RAM, then this board makes sense.  Hell, it does make sense either way.  It might lack on the audio front, and not have WiFi natively on the board, but what it does have is nearly everything else!

The Gigabyte Z690 Gaming X motherboard does not take any shortcuts when it comes to building quality and durability.  Gigabyte has always prided itself in creating hardware that is robust and gets the job done, much like Toyota does in their never-say-die vehicles.  The Gigabyte Z690 Gaming X motherboard is a budget-conscious option while keeping the price budget and the features respectable all while being Windows 11 compatible, straight out of the box.

No motherboard will ever be perfect, whether it be because of a lack of features, functionality, or an exorbitant price tag.  Gigabyte is able to find the perfect balance between these three while only dropping WiFi in the process!  The perfect motherboard for those wanting to save on money while not giving up quality in the process!