The SADES Battle Ram Mouse is one part of the Battle Ram combo which consists of the mouse, which we’ll be looking at in this review, as well as the Battle Ram keyboard and a SADES Mouse Pad.

The Battle Ram combo is an incredible way to get set up with all you need to get started in your gaming setup as well as to look good doing it with both the keyboard and mouse having customisable RGB as well as a stylish design.

Gaming mice (mouses? I never know) are one of those things that a lot of people only getting into the scene think are nice to haves.  Until they use one.
A gaming mouse is specifically designed with one goal in mind – gaming.  But then when the newcomer starts to look deeper into getting their very own gaming mouse, they will be drowning in a sea of them before they can even hit enter on their google search.

Depending on the type of gamer you are, you may need different things from your mouse.  MMORPG gamers, for example, like lots of accessible buttons to hotkey their combos, potions, and spells to.  Some people like bigger, some lighter, and the gaming mouse world has it all.  From big heavies to small heavies, to big lightweights, to whatever you can dream of, it’s probably there.  So now what?

Once again, the price margin is a big influence on this too as you can go from cheap junk to expensive junk or something that just doesn’t fit you.

So, with a company like SADES, that is research and development focused while trying to make sure all your organs stay where they belong, they stuck up their hand and gave us a chance to look at one of their competitors in the mouse race – the Battle Ram mouse.

So – without further ado, let’s take a closer look. 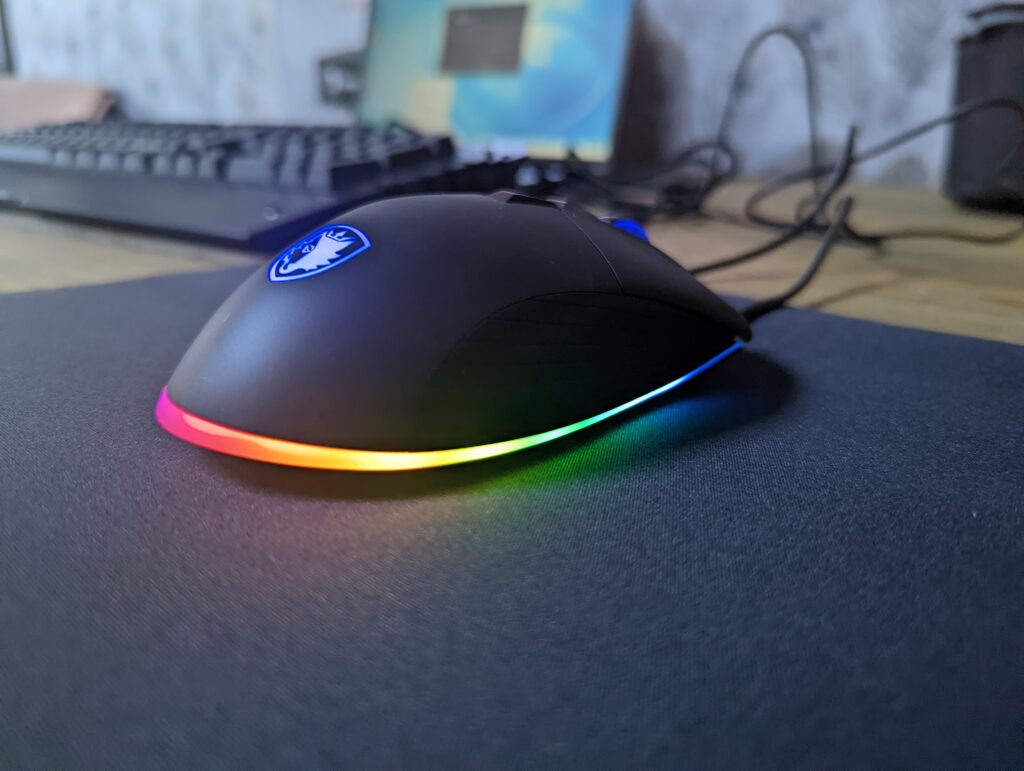 The Battle Ram mouse from SADES is a heavy hitting gaming mouse that certainly comes in a light package.  Weighing in at only 105g, this is by no means a superlight mouse, but it is light.  And balanced. 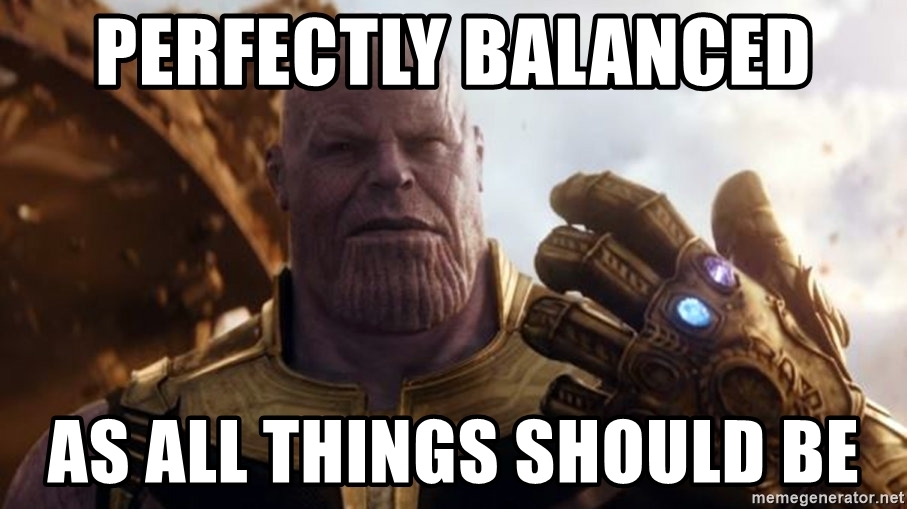 While holding the Battle Ram mouse, the weight distribution is even which allows for fast and snappy wrist flicks in tense situations but also for steady and smooth tracking for those cross map long gun shots.  All this aided by the use of the PMW 3050 optical sensor that can go up to 4000DPI – but that’s mental and I don’t personally know of anyone using that much sensitivity.  Personally, I sit in the lower quarter of that DPI range.

The Battle Ram mouse consists of 8 buttons, most of which are fully remappable.
Out the box – the defaults are left and right mouse clicks, scroll wheel and click, DPI – and DPI +, forward, backward, and a third button which SADES has named the sniper button.

At a closer look into the buttons, the DPI adjustment buttons can be used to jump between up to 6 different pre-sets, and adjustable, DPI settings.  The scroll wheel changes colour to show which setting you’ve chosen.  These colours can also be edited.
The forward and backward buttons are your standard mouse 4 and 5 buttons that most, if not all, gaming mice have.  These can be assigned to a variety of different functions in game.  For example, I have them set to abilities in Valorant and pummel and grenade in both Halo Infinite and Splitgate.
The sniper button essentially halves your current DPI setting to give you a steadier aim at whatever it is you’re trying to hit.  I found this button to come in pretty handy in graphics editing too for those more finesse needed tasks.  I have changed this button in all games to ctrl (crouch) for easy sliding or evading.

All the buttons mentioned above are remappable and can be assigned to any keyboard key, or to a macro function or some other preloaded functions, like rapid fire. 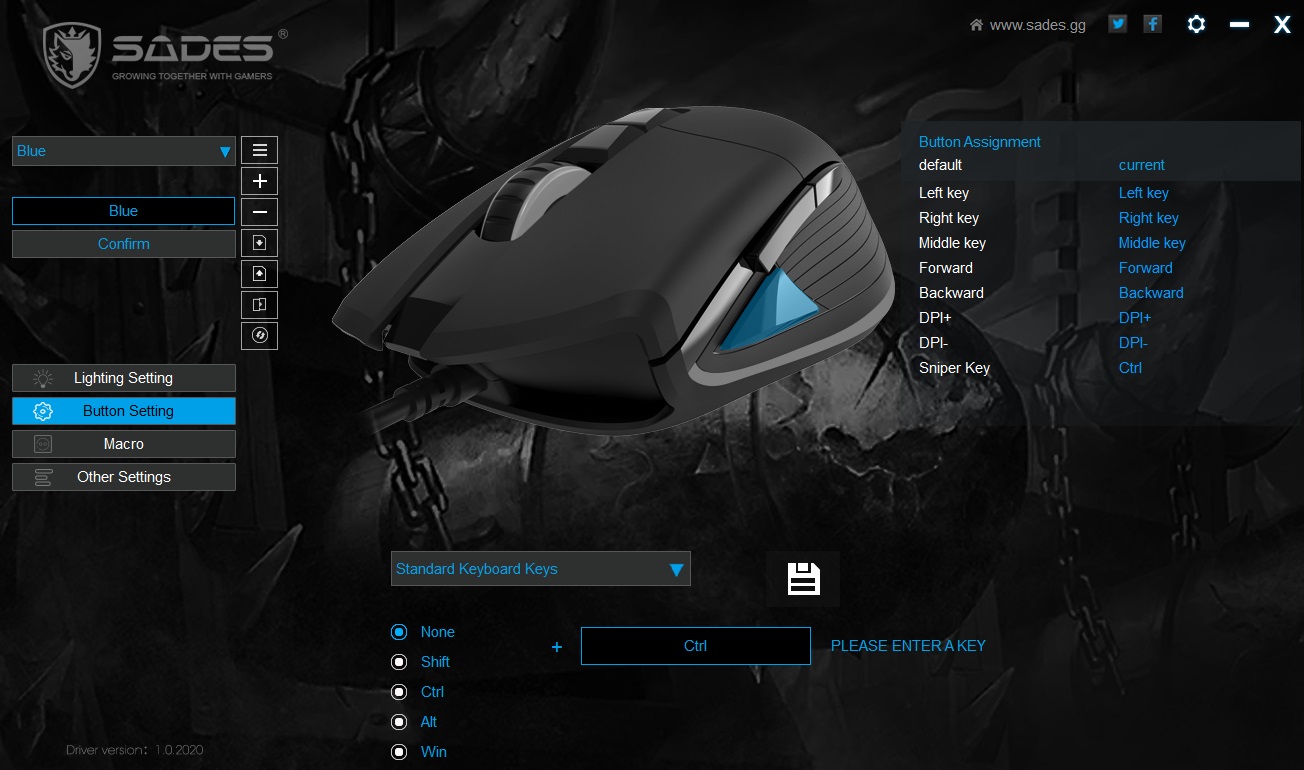 As all good gaming things should, the Battle Ram mouse comes locked and loaded with a healthy does of RGB.  And it looks good.
The Battle Ram mouse has a classy little RGB strip running along the bottom edge of the mouse from under the left click, all the way around the back, to under the right click.  To be fair, I think it might be my favourite mouse RGB look!  This strip, as well as the SADES logo, light up in a variety of colours and patterns and can all be adjusted through the mouse software.  Me being me, set it almost immediately to a plain light blue (again – cyan?) as that fits my set up and I’m VERY visually distracted.  I did try and break out of my mould though and mess around with the colours, but I couldn’t stay away for long.

The buttons on the Battle Ram mouse all have Omron Switches, which are good for 10 million clicks.  Again, that’s a whole bunch.  I think my left click might be about halfway there though with the amount of shooting I’ve done with since receiving it.

One setback for some of the readers would be that the Battle Ram is a wired mouse but this for me isn’t an issue and the comfort of knowing it won’t die on you mid gunfight (because you thought it was charging and it wasn’t) isn’t a risk.

For more technical details on the Battle Ram mouse, see the table below. 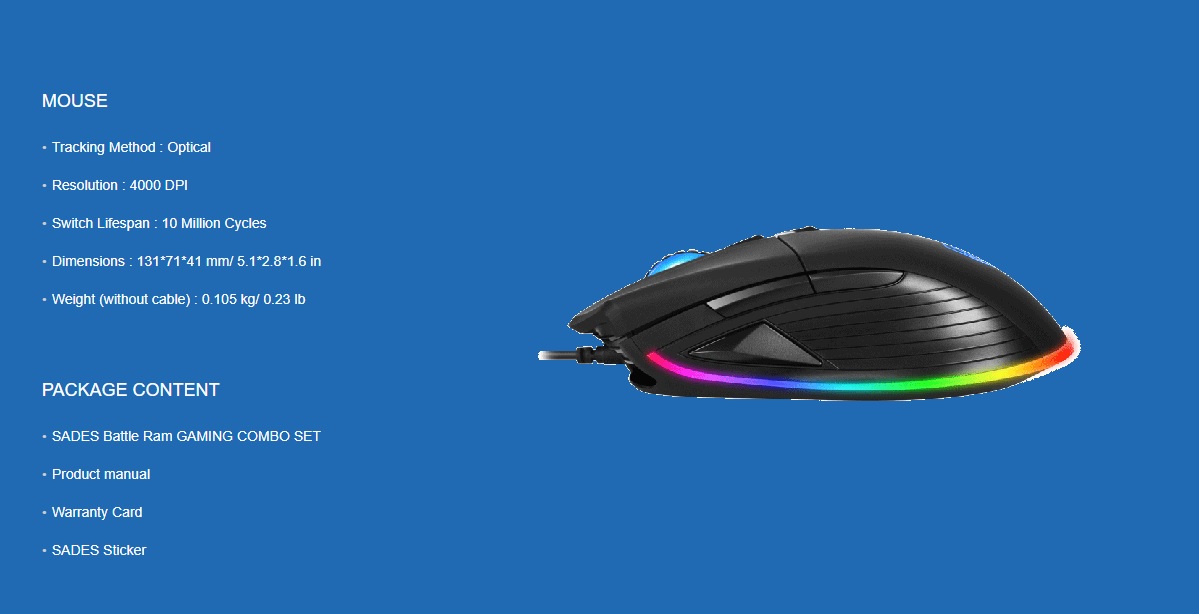 My experience with SADES started with my acquisition of one of the older model mice at a Geekfest convention a few years back.  When exactly, I don’t know but it was the first one at Monte Casino – feel free to give me the year as I’d really like to know.
This mouse was my first buy in a gaming mouse in quite a number of years and I must say, the SADES Gunblade really served me well.  Seen below. 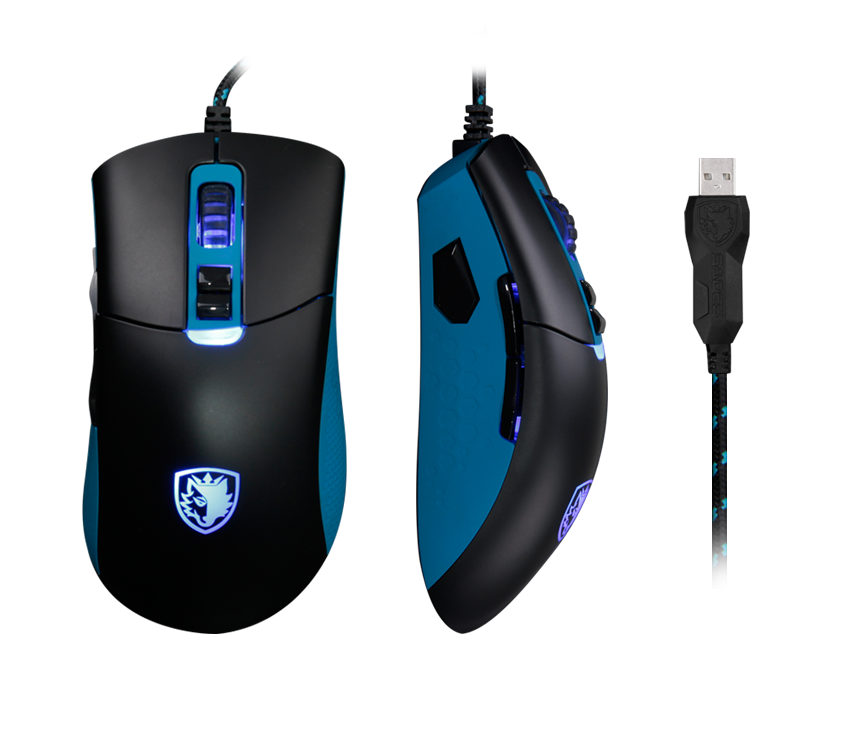 Fast forward a few years and the SADES Gunblade has now been replaced by the Battle Ram.  And I am just as stoked on it.
The adjustment from the Gunblade, which was slightly bigger and quite a bit heavier to the Battle Ram was as effortless and smooth as we’d all dream getting a new mouse would be. 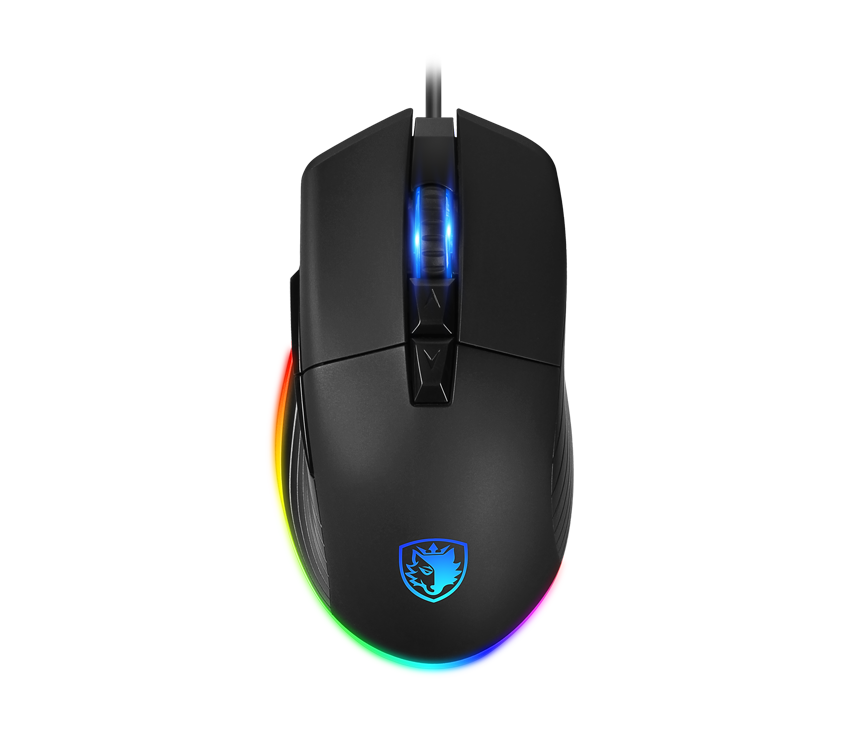 Immediately, I could feel the improvements to the Battle Ram as it seemed to fit my hand snugger. Guess the depends on whether you’re a claw, palm, or fingertip gripper, I’m a hybrid between palm and fingertip myself and it feels good in my hand.

The positioning of the additional buttons on the side of the mouse was also a big upgrade as I could easily press the forward and back buttons and a simple “thumb roll” would allow me to click the third button as it rested on the lower part of my thumb.  With the Gunblade, this third button was quite a bit lower, so a small slide was needed, and this sometimes resulted in missed clicks or losing that precious 0.0001 second that absolutely would’ve made the difference.  Click accuracy and speed on the Battle Ram is phenomenal and all the buttons are easy to click, hard enough to prevent accidental clicks and all are very responsive.

I also really like the ability to shift my DPI in game with a click between a range of my choice as it can sometimes help me on nights where I’m a little slower and my aim is unsteady, so I shift it down, or where I know I might need to whip hard around a corner, so I shift it up.  The addition of 2 extra pre-set DPI’s is also nice from the Gunblade’s 4. 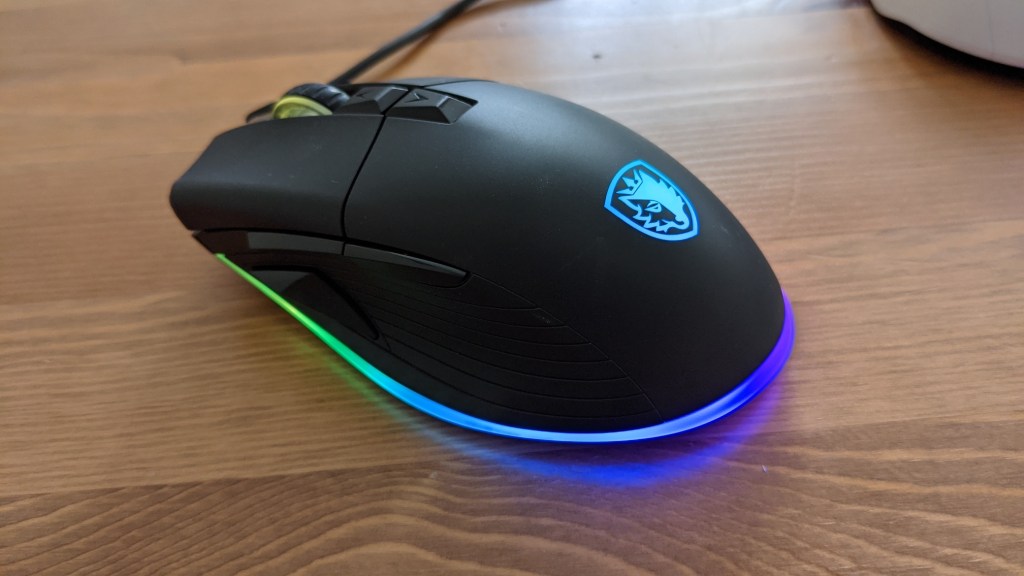 For its price and its punch, the SADES Battle Ram combo is a contester of note and definitely worth your time to consider.
Its design is sleek and subtle which, for me, is a big plus.  Sorry to all you space age mice fans.  The RGB is bright, yet not overbearing, and will add elegance to any and all set ups.
It’s highly responsive, durable and with all of its customization, can be the perfect gaming companion in the hands of new comers and pros alike.
The software is easy to use and doesn’t eat ram and resources (thank goodness).
Again, it is unfortunate that SADES is not readily available in South Africa at the moment but that will change in the near future (spoiler alert?).

We award the SADES Battle Ram mouse the following ratings:

With an overall Early Axes rating of 9 out of 10!

The Battle Ram combo, specifically the mouse in this review, is a great addition to any gaming quiver and will make a worthy adversary to any opponent or foe that you may encounter in your gaming adventures.  The mouse is only available in the combo and will hopefully be available in South Africa soon.

Thank you to the legends over at SADES for giving us a chance to review their products!