The Battle Ram combo is an incredible way to get set up with all you need to get started in your gaming setup as well as to look good doing it with both the keyboard and mouse having customisable RGB as well as a stylish design.

But that’s enough about the combo – let’s zoom in on the keyboard itself.

As it is with all peripherals, the market for keyboards is absolutely flooded from cheap keyboards that won’t do what they say to keyboards that you’d have to sell a kidney to sell.  With some keyboards being made for office use and others being for gaming, the sheer volume of options can sometimes be daunting and very overwhelming.

So, let’s take this time to shine the light on one keyboard that won’t only kill your pocket, but will do exactly what you need it to and will keep on doing so for a while. 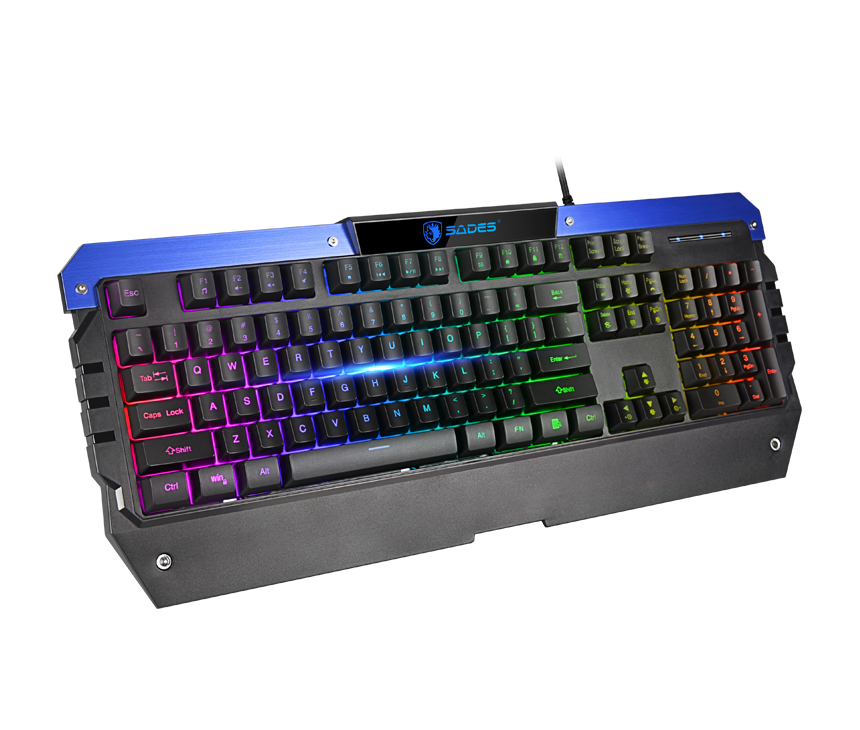 The Battle Ram keyboard is a full-size keyboard with 104 membrane keys.  Don’t close this review because you were looking for a mechanical keyboard – give it a chance, you’ll be pleasantly surprised.
With this being a full-size keyboard, there is the addition of the numpad on the right side of it.  Now some gamers prefer smaller keyboards without the addition of a numpad as desk space is often limited but for certain games and MANY other uses, the numpad is handy to have.  I, for one, rather like the numpad.
The keyboard itself is sturdy in design, made from a tough plastic, and heavy enough that it won’t slip and slid over your desk.  This is also helped by the grippy little rubber shoes on the bottom to help it grip to the surface of your desk or gamepad.  The overall design of the keyboard is sleek with a little bit of a space age feel to it. The top of the keyboard is accentuated with a blue metallic strip and the SADES logo (which is also RGB).  Altogether, it’s a rather sturdy looking piece of tech that won’t appear out of place in most setups. 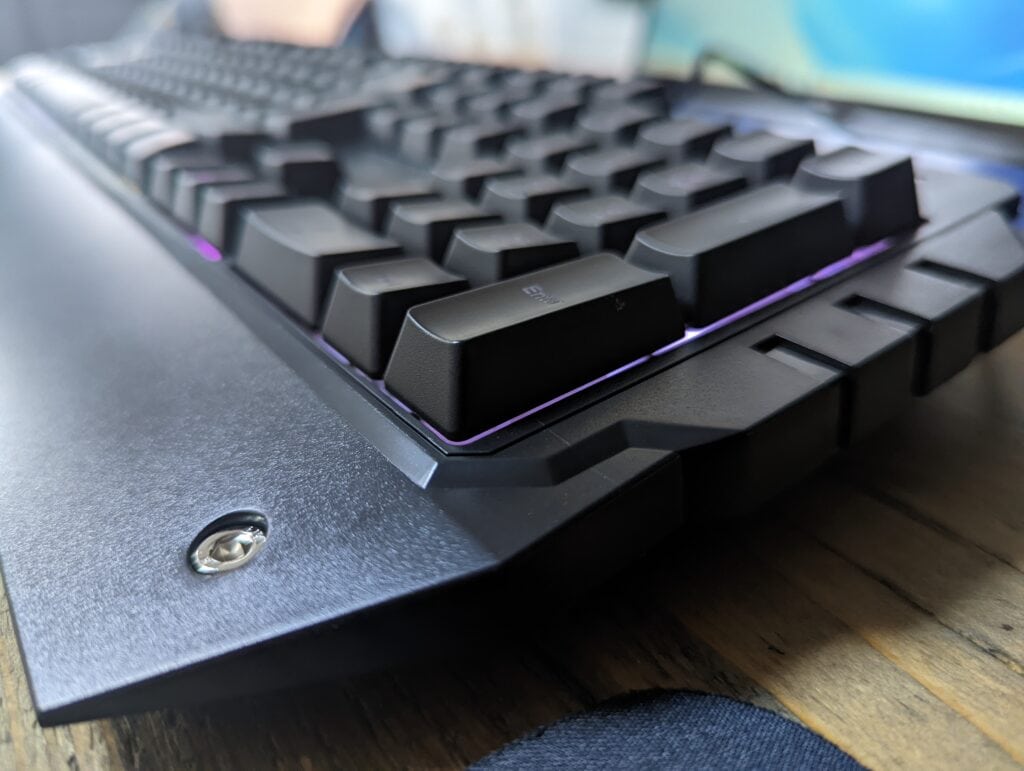 SADES opted to go for membrane keys with the Battle Ram and, I will be the first to admit, I had my doubts.  These doubts, however, were quickly put to rest as I started using the keyboard in games like Valorant, CSGO, Splitgate and Halo Infinte.  The keys presses were highly responsive with just enough movement to let you know that you are pressing the keys but not so much that you get lost in the keys and struggle to move your fingers around.  The key spacing is also just right with my bigger hands not being cramped up but also close enough together that I’d imagine those with smaller hands would still have an easy time navigating their fingers on the keyboard.
SADES have also put their word in it that each of the membrane switches is good for 10 million cycles – which is a lot!

As with all good gaming things, we need RGB.  As we all know, RGB increase all skills by +10 so that can only mean that more RGB is better.  The Battle Ram doesn’t disappoint us here with every key being back lit with RGB, as well as the keycap having RGB.  As mentioned earlier, the SADES logo at the top of the keyboard is also RGB.
This all helps to make the keyboard look great and there are many different colours and “light shows” to choose from to suite your need and setup.

The Battle Ram is a wired keyboard that comes with a 1.8m braided cable that is long enough and tough enough to suite any build.  Again – wired vs wireless, each to their own, but what is nice about this wired keyboard is that there are no low battery warnings or random disconnects in those pinch moments.

The keyboard also features a water-proof design BUT I’ve not deemed to test that myself.  I will take SADES at their word for this one.

For more technical details on the Battle Ram keyboard, see the table below. 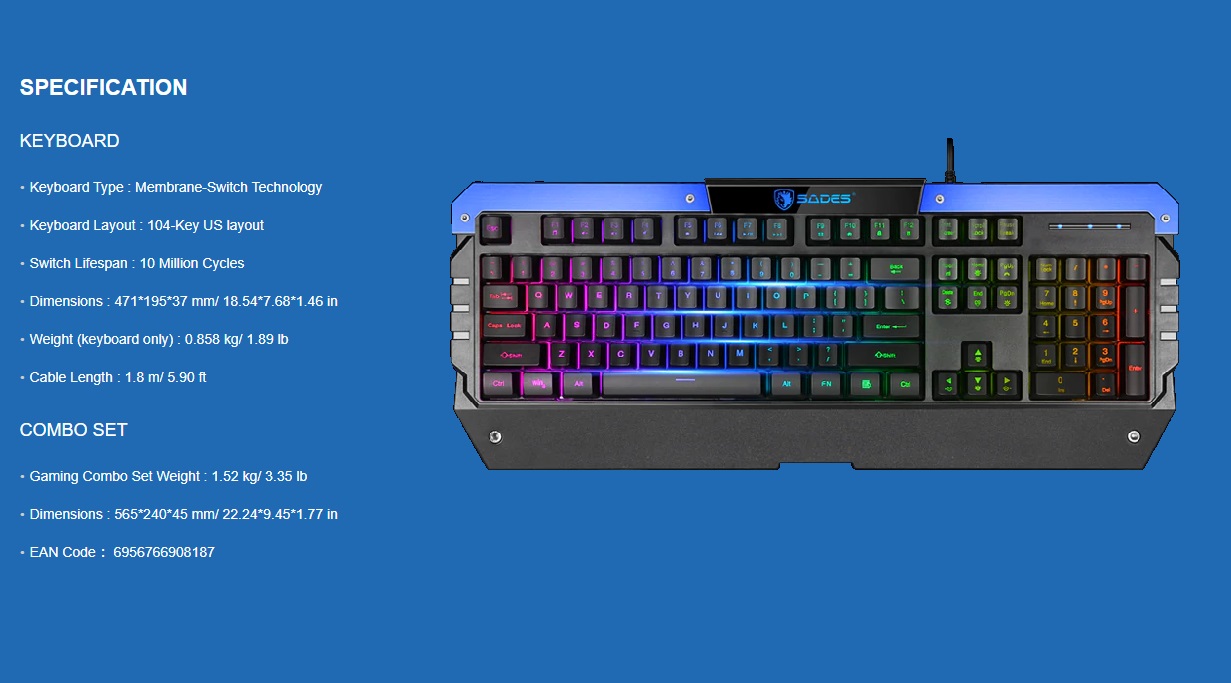 From receiving the Battle Ram combo, it became immediately clear to me that SADES is a company that strives for excellence.  Everything in the box was well displayed and well secured that there would be no unnecessary breakage or damage – even after surviving our less than delicate customs department.

As mentioned earlier in the review, the fact that SADES elected to go with membrane over mechanical switches for the Battle Ram at first had me a bit sceptical.  But SADES is a company that prides itself in its research and development, so I gave them the benefit of the doubt and, quite honestly, I did not even feel the loss of mechanical switches.  For one, the overall experience was a lot quieter and my teammates through less snide remarks my way when the inevitable lean forward to increase concentration moments came in tight spots.  Usually, in these moments my hard key pressing habits have all my teammates hearing the clicks of my keyboard over my mic but not with the Battle Ram!  So, thank you for that SADES.

One small factor that is a bit of a downside of this keyboard for me is that every time you reboot your PC, the keyboard starts up with its default RGB sequence and you have to then switch it back to your preferred lighting which, for me, was just a standard light blue (cyan? I don’t know) but this is really quick, and I got over this pretty quickly.  The keyboard also doesn’t have software, which is not much of a biggy, and you can’t customise the RGB.  You can, however, put it into “professional mode” by turning the RGB off completely with FN+PgDn.

In all my use of the keyboard over the last couple of weeks, I have found it very comfortable around with the variable height adjustment which has 3 options – flat, smaller lower, legs and then wider, taller legs.  The keys, as mentioned are far enough apart to not keep my hand cramped up and close enough together that I don’t pull something trying to stretch to them.  The keypress on them is also just right – Goldilocks would agree.

At its price range, the Battle Ram combo, but specifically the keyboard, is punching far above its weight class in terms of performance. Its sleek and classy looking, while at the same time having a futuristic, space-age vibe to it which would look good with any setup.  The loss of mechanical keys for some might be a deterrent but I can promise that these membrane switches give as good as they get.

Unfortunately, the SADES Battle Ram combo is not immediately available in South Africa anymore but, with a bit of luck, we can hopefully get them back here so that we can have their hard hitting, good looking, well priced tech for ourselves.

And so, as we close the curtain on this review, we give the SADES Battle Ram Keyboard the following ratings:

With an overall Early Axes rating of 8 out of 10!

The Battle Ram combo, specifically the keyboard really is a great starting point for anyone looking to level up their gaming experience and skill. The keyboard is only available in the combo and will hopefully hit our shores soon.

Thank you to the guys over at SADES for giving us a chance to review their products!