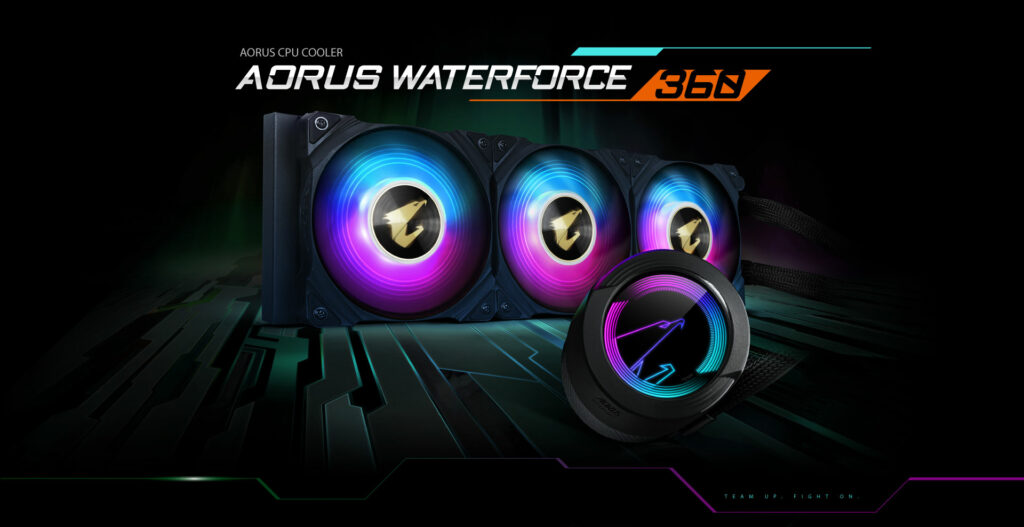 The days of simple stock coolers being enough to keep CPUs cool are long gone.  With monster CPU’s such as the Ryzen 9 5950X boasting a massive 16 cores and 32 threads, and the new Adler lake, 12th Gen Intel CPUs with the 12900k which has, a very confusing, 16 cores, of which 8 is performance cores and the other 8 is efficiency cores, and 32 threads, these beasts both can touch on 250w when going full tilt.

This means lots of heat, which means you will need some serious cooling capabilities.  Gigabyte and Aorus have just the solution for it.  AIO coolers have been around for some time, being the go-to cooling solution as they are good at cooling while looking good and generally run quieter than most air coolers.  AIOs have also become a bit of a fashion statement.

Gigabyte and Aorus were so gracious in sending me the Aorus Waterforce 360mm AIO to tame my newly acquired 12th Generation Intel 12700k CPU.  I cannot thank them enough for this as well as the Gigabyte Z690 Gaming X motherboard ( review incoming) that they have supplied us with!  We are now Gigabyte powered.

The Aorus brand is and still is the pinnacle in the Gigabyte range, where the Gigabyte products are all about function over looks the Aorus products add in some serious flair making them, often, breathtaking to behold, and the Aorus Waterforce 360 is no different.  The Aorus Waterforce 360 is obviously a 360mm AIO that uses 3x120mm fans to cool the radiator.  These fans are Power Logic 120mm dual ball bearing fans and are rated for 2500 rpm and can move 59.25 CFM of air.  They are relatively quiet compared to the previous AIO I had even when they are running at full tilt, which is hardly needed.  The RGB on them is spectacular.  The days of single RGB colours are long gone and the Aorus Waterforce 360 fans are capable of creating splendid scenes thanks to the advancements that have been made with RGB.

The radiator on the Aorus Waterforce 360 is nothing out of the ordinary, it is an aluminum radiator that is 120mm wide and roughly 360mm long.  The piping which runs from the radiator to the pump is rather thick compared to some of the Corsair coolers but also shorter, fortunately, my case is not extremely big so I was able to front mount my Aorus Waterforce 360.  The thicker pipes do mean they are slightly less pliable but this could also be the fear of forcing something new and I should try and adjust them again.

The pump is where the magic continues for the Aorus Waterforce 360.  The pump, which is quite a large entity itself, is encased in a round aluminum housing with the face ring being slightly offset.  The pump, which measures a significant 76mm in height, has its pipes coming out of it in a pair of rotating 90′ fittings, which thanks to an ingenious mounting bracket design, can be adjusted to sit on any side of the pump that you require.  The mounting bracket for the Aorus Waterforce 360 pump clips onto the back of the pump and can be twisted to best suit your needs, if you need your pipes to exit the pump at some strange angles, you are free to do so. making squeezing it in next to tight-fitting RAM or IO heatsinks a breeze, well done Aorus.

Thanks to the increase in pipe diameter, from 5.1mm to 7.8mm the water flow has been increased by 37% which means heat dissipation is improved by more than a third! 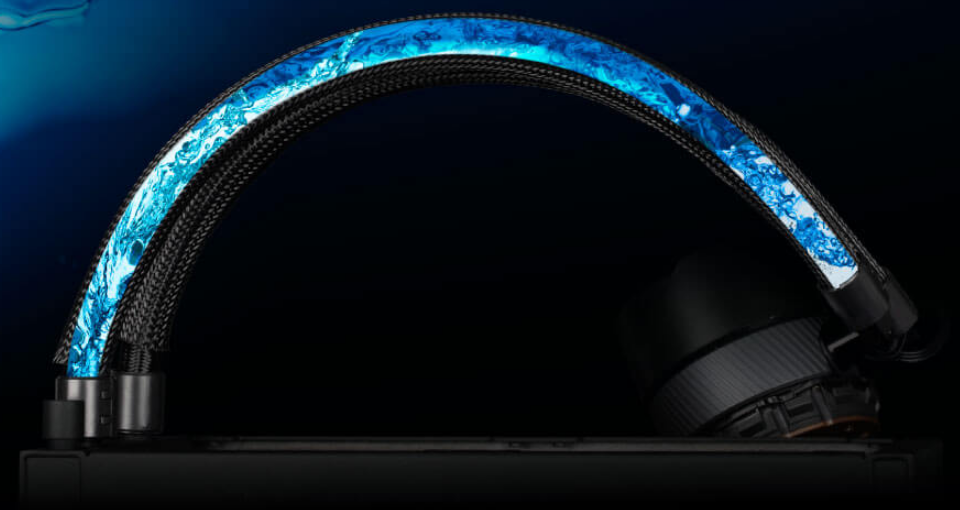 What’s in the Box?

Apart from the fans, which are each packaged in their own cardboard sleeve, the radiator, and the pump, the Aorus Waterforce 360 box has loads of other goodies, functional of course, inside of it.  The backplate that is fitted to the rear of the motherboard,  interestingly as it uses a single backplate for all the socket types, thanks to a sliding hole system, is very ingenious.  There are also mounts for AMD’s AM4 and Threadripper sockets.  Aorus even provides a large syringe of their very own thermal compound, which we used, even though it came with pre-applied paste on the pump base. 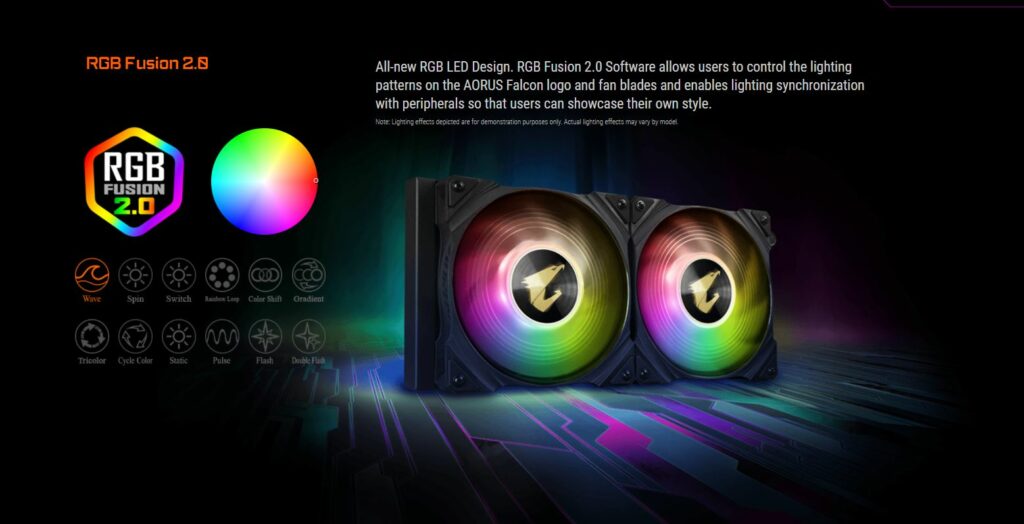 With an AIO that features fans and a pump that is made so exquisitely, one would expect the software to follow suit, unfortunately, that is not the case.  Don’t get me wrong, it is not bad, but it can be immensely refined.  You will be required to use two separate programs to control the entirety of the Aorus Waterforce 360.  Since the fan control does not get plugged into the CPU fan header on the motherboard, but instead it goes into a USB socket straight on the motherboard, your fan speeds cannot be controlled and set in BIOS.  You will need to use RGB fusion 2.0 to control the RGB.  For those who have used Gigabyte products before, you will be familiar with RGB fusion.  Not the greatest looking or most appealing software on the market but it gets the job done, and provides more than enough options when it comes to RGB.  I would, however, like to see my favorite ambient effect, which is left out of nearly every RGB software for hardware, to be included, this way my RGB can match what is happening on my screen. 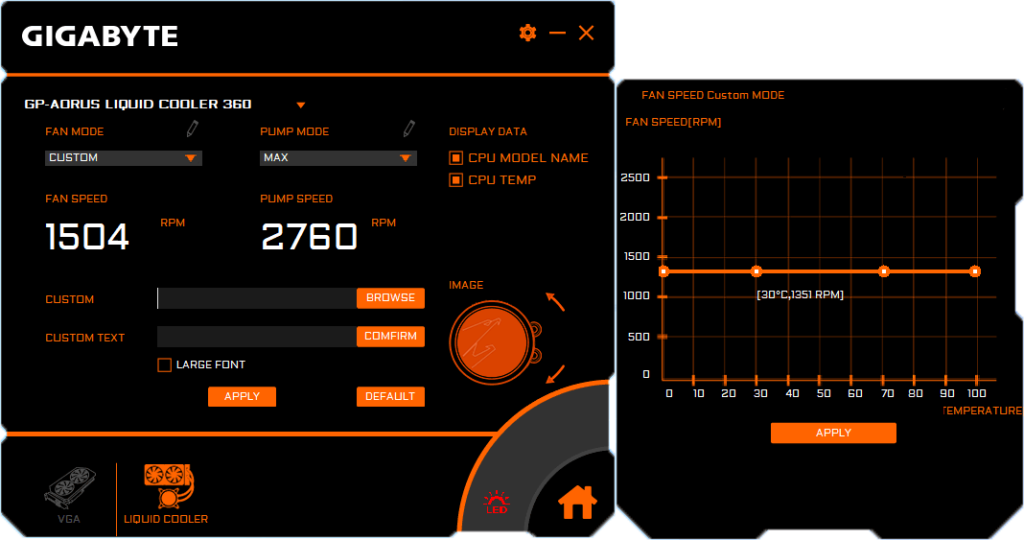 If you want to control anything related to the pump, be it speeds of the fans, pump, or pump RGB, you will need to start up Aorus Engine.  Once open it will detect your GPU, even if it is not a Gigabyte/Aorus card, and then your Aorus Waterforce 360.  Once selected you will be able to set your fan speeds as a custom graph or choose between other options like Silent, which as the name describes keeps the fans at 0 RPM for as long as possible.  Full speed, keeps fans maxed out all the time.  High Performance will set a very aggressive curve for fans to keep temps as low as possible.  I opted for the custom and created my own curve.  These above-mentioned options are the same options you get when selecting settings for your pump speed.

The only issue I had with the Aorus Waterforce 360 is the software, the fact that the AIO would work, but RGB and fan speeds would not automatically go to what was selected unless the software was opened is a bit of a pain.

Thanks to Gigabyte South Africa, we were able to upgrade our system and the Aorus Waterforce is now our full-time AIO so we did not have much to compare it with but we did do some tests on our new system to see what temperatures are like running everyday situations such as mundane work as well as some gaming with common titles.  Our setup is as follows:

We have set our fan speeds to stay at 500 RPM until our CPU reaches around the 45’C mark and then start to increase with 80% speed when we reach 70’C and 100% speed when we reach 75’C.  This is not how we would use it generally as we prefer to strive to keep temps, even when under gaming load, to below roughly 65’C. 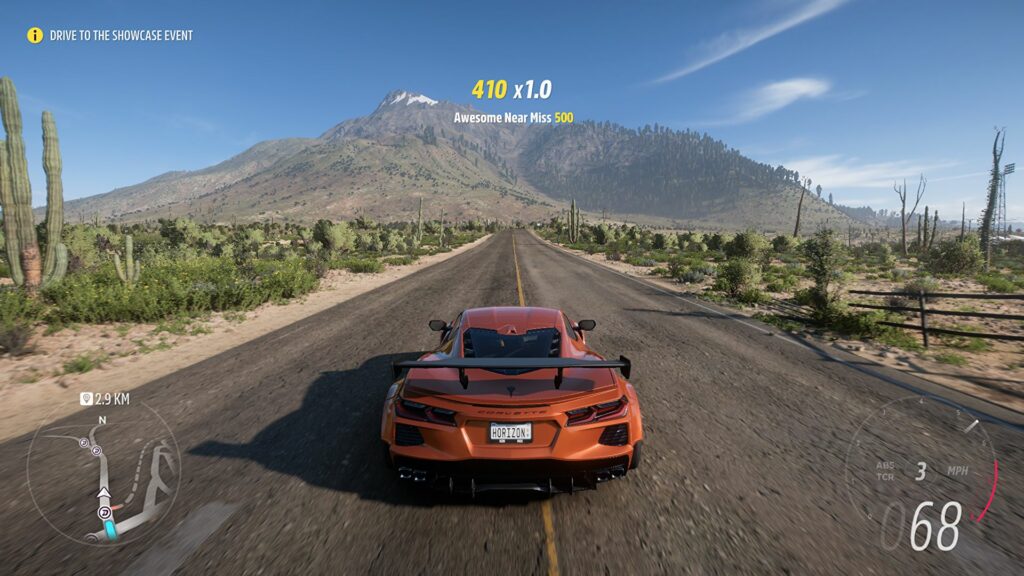 The ever-popular arcade racer, Forza Horizon 5 is truly a blast to play, while it can be taxing on a system that isn’t quite up to the task, our previous 8700K i7 could manage but not without having to stretch its legs.  With settings turned up to High to provide good FPS, we saw our 8700k reach the 65’C mark at times.  Dropping in our 12700k on the Aorus Waterforce 360, we never even broke a sweat.  Greatly improved performance, averaging 165fps, while temperatures were comfortable at an average of 53’C. 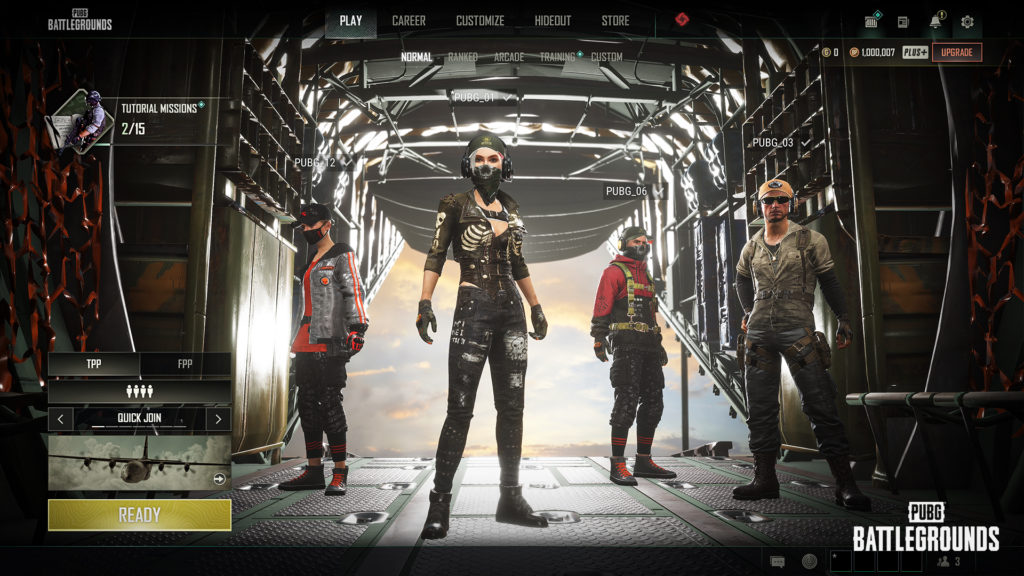 With the recent free-to-play status of PUBG, it was only natural that we would test out the Aorus Waterforce 360 on it.  We cranked the settings up to max for this one.  In the past with the 8700k on a 240mm cooler we would get rather toasty touching the 70’C mark but the Aorus Waterforce 360 chills the 12700k right down to sub 50’C even during rather significant frame drops which is synonymous with PUBG. 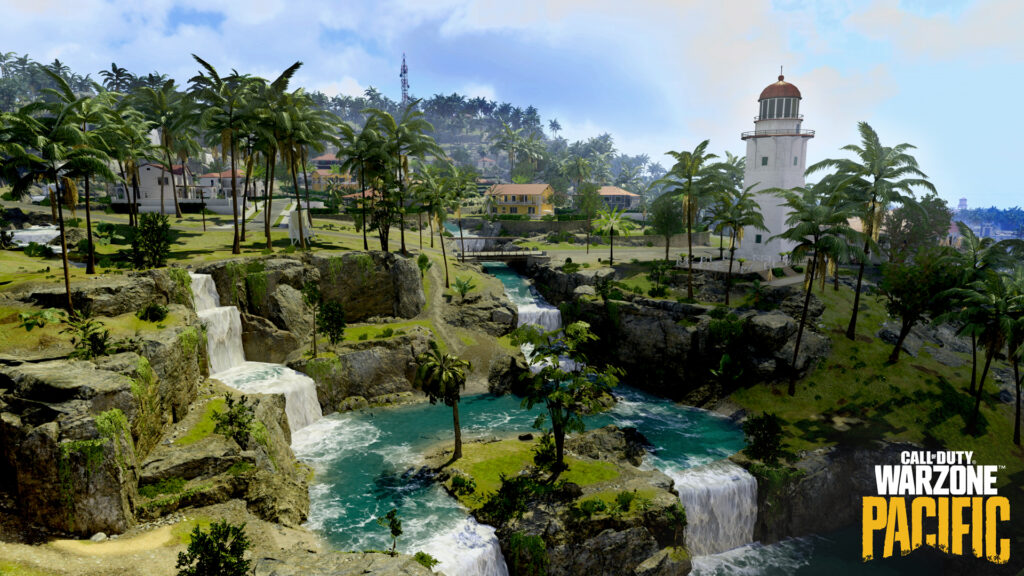 No review would be complete without checking out how anything handles the highly-unoptimized beast that is Warzone.  Our previous 8700k and 240mm AIO configuration did struggle on Warzone often seeing high 70’C values while not giving the greatest performance under medium settings at 1440p.  Which did cause us to turn down our resolution to try and keep temperatures lower.  But thanks to the Aorus Waterforce 360 the 12700k can truly stretch its legs and give our RTX 2080 a workout.  1440p, medium/high settings and we are able to sustain a respectable 130+ fps while running at a nice and comfortable 60’C. 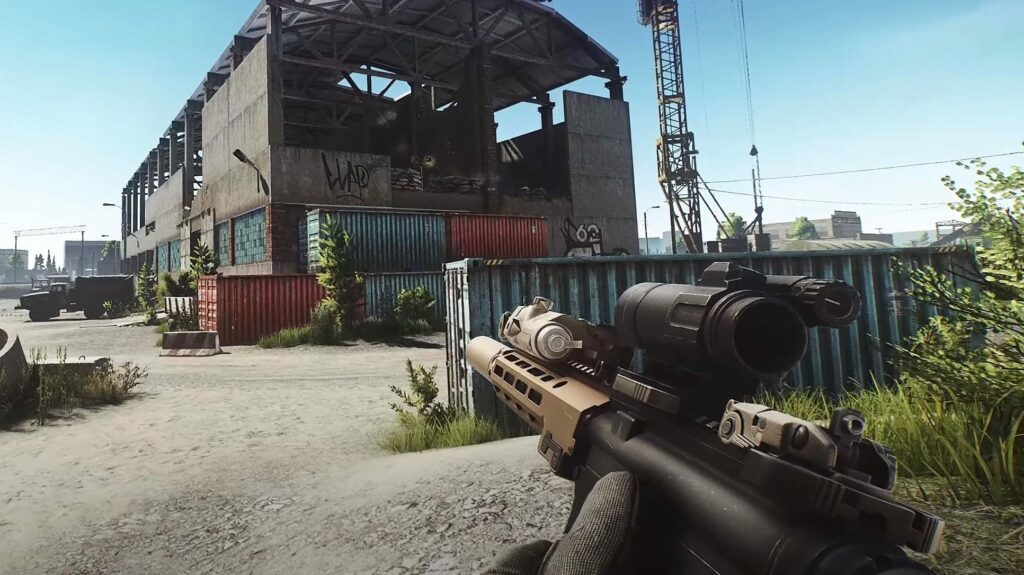 EFT truly is a strange game, from its extremely hardcore way of NOT showing you how anything works to how it can cripple and debilitate even the most capable of PCs.  We used to play EFT on our 8700k setup and medium settings would give us 80 fps in 1440p.  On the new setup with the Aorus Waterforce 360, we are touching 100 fps on many occasions, apart from some of the unoptimized maps where fps take a drop and temps spike to high 50’C but on the usual maps, we generally sit comfortably below the 50’C.

The 360mm AIO market is a very tight one indeed, where the 240mm market strives to be budget-friendly, the 360mm is where the brands come to show off what they truly can do.  All the stops are pulled and every feature is added.  When you compare between the top tier brands such as Corsair, Aorus, and MSI, to name but a few, there is not much separating them in terms of performance.  So features and looks are what will make the difference, and naturally, a good-looking price will sweeten the deal.

With really impressive thermals, staggering good looks, and a pump design that will have everyone weak at the knees, the Aorus Waterforce 360 truly is a great option to pair with any of the high-powered CPUs that require significant cooling power.  Some of the other brands do feature an LCD display that you can customize but do not fret, the X variant of the Aorus Waterforce 360 does provide that as well.  The only possible letdown of the Aorus Waterforce 360 is the fact that it requires two programs to manage the fans and RGB, as well as its price.  If Aorus could drop the price to compete a little closer with the other brands it will easily blow them away!