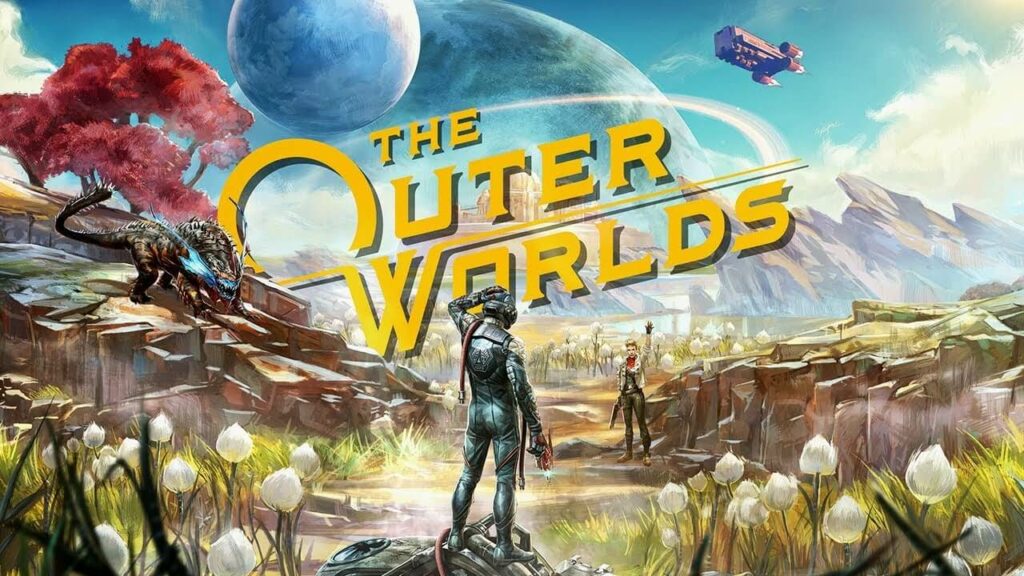 When you think RPG titles one of the first names that come to mind is Fallout.  And you wouldn’t be wrong by saying that the likes of Fallout 3 and New Vegas are arguably some of the best RPG’s around.  But since then the Fallout has gone downhill.  The likes of Fallout 4 and the devastatingly bad, Fallout 76 has driven the Fallout name to an all-time low.

Thankfully the people over at Obsidian decided to take their skills, which has given us titles like Star Wars: Knights of the old republic, Fallout New Vegas and Pillars of Eternity, and revive the Open-world RPG genre that was being held together but the incredible Witcher 3.  The Outer Worlds has been coming and I have tried to keep away from all the hype… Can it be the Fallout we have all wanted?  Or will it splash about like Fallout 76…  I am very pleased to tell you that this is possibly the greatest not-Fallout game EVER! 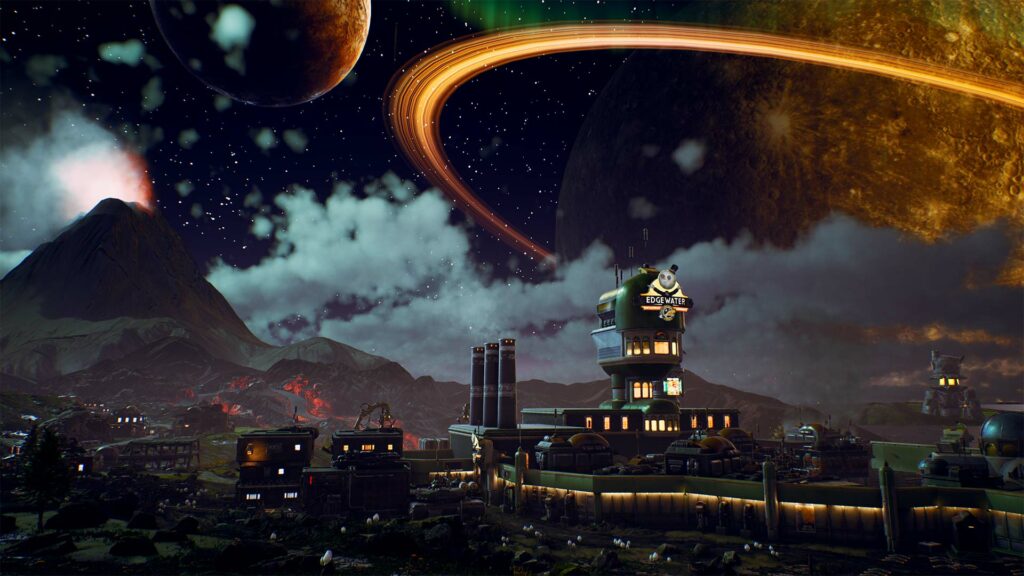 At the start of this game,  scientist Phinneas Wells wakes you from an awfully long cryosleep, 70 years to be exact.  He needs your help, of course!  You are tasked to go to Halcyon, the outer most planet in the galaxy, also controlled by a bunch of big corporate entities.  The people that live, or should I say survive, in Edgewater, the first town you visit, are exploited.  The medicine supply is distributed amongst, and to those who can contribute the most, first.  The gravedigger is the first you meet, he needs a hand in collecting some money for the rent of future burial sites…  How you go about the collection is up to you.  Do you persuade, take forcefully, steal or simply kill.  The Outer Worlds takes the “choice” system to the next level with tremendously involved decision making, which sways the outcome of your choices dramatically.

Another group of villagers have been lucky enough to escape, but the major of Edgewater wants you to bring them back.  Siding with the mayor means your travels in the vast wildlands of Halcyon won’t only have you looking over your shoulder for monsters.  Add destitute villagers who are now fleeing from Edgewater.  Siding with the villagers will also have other ramifications in Edgewater…  Choices choices choices, can you stand by yours? 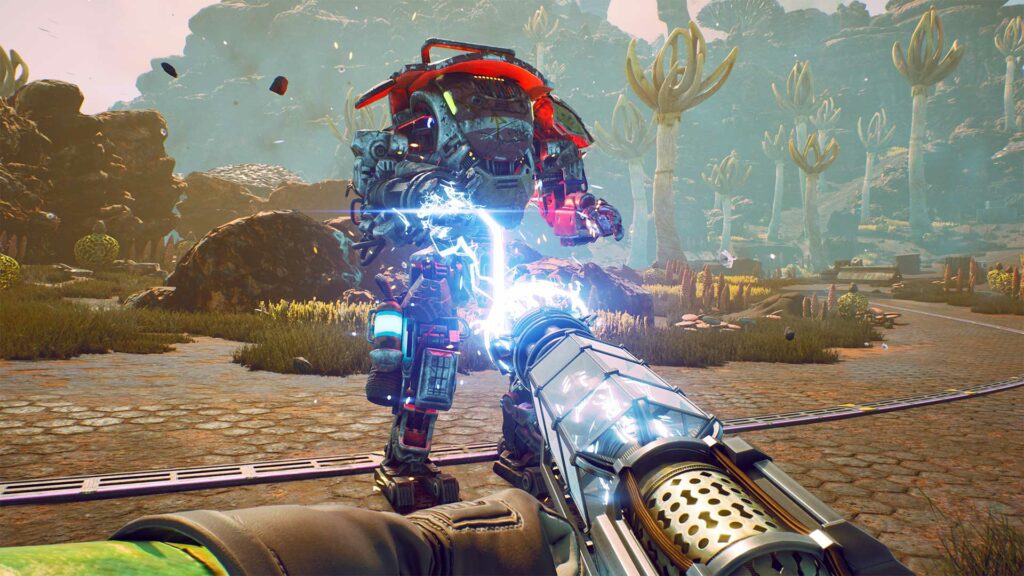 The Outer Worlds can easily be compared to the likes of Fallout when it comes to gameplay, which for the most of the time, that means it has rather strong and serious undertones.  The gameplay and mechanics certainly take most of its ideas from Fallout.  Where it does differ from the Fallout series, is in its storytelling and how it incorporates satire EVERYWHERE!  The story and dialogue choices, which are the heart of the storytelling and decision-making that really makes The Outer Worlds great.  But drawing too much from the tongue-in-cheek games like Borderlands, does make some decisions more difficult to make.  Not knowing whether the dialogue is meant to be satirical or seriously did creep into a fair amount of choices made during my playtime.

Missions or side missions can be tackled much like in Fallout.  You can either try to talk your way through them if you have enough skill points on charisma and persuasion, fight your way through, all guns blazing, or try to avoid any type of conflict by sneaking around the enemies.

Although the game tries to make it seem like these decisions have real consequences, unfortunately, they don’t do THAT much apart from making certain factions like, or dislike you more which in turn will make them treat you less kindly when interacting with them.

The above mentioned are the only slightly negative things about The Outer Worlds.  Let us start with the skills and upgrades and abilities.  In other games, you will find yourself dumping all your earned skill points into a few skills, such as strength, dexterity and vitality.  Skills such as chemistry and charisma are often almost pointless.  In The Outer Worlds, this is not the case.  Quite the contrary.  You can build an almost completely non-combat character that will still be able to fight wildlife and marauders, who don’t like to reason but be able to almost talk your way out of any situation.  This opens up for tremendous amounts of replayability.

The loot, inventory and upgrading system is another feature that really makes The Outer Worlds shine.  While there is a vast array of weapons and armour to loot across the many planets in The Outer Worlds, each item can be customized itself.  This will encourage you to try a host of weapons and find which work best for certain enemies.  Found a weapon that you really like?  No need to worry, weapons can be upgraded in many ways, damage, elemental damage and more, making even one of your trusty old weapons relevant throughout the game.

A friend in need 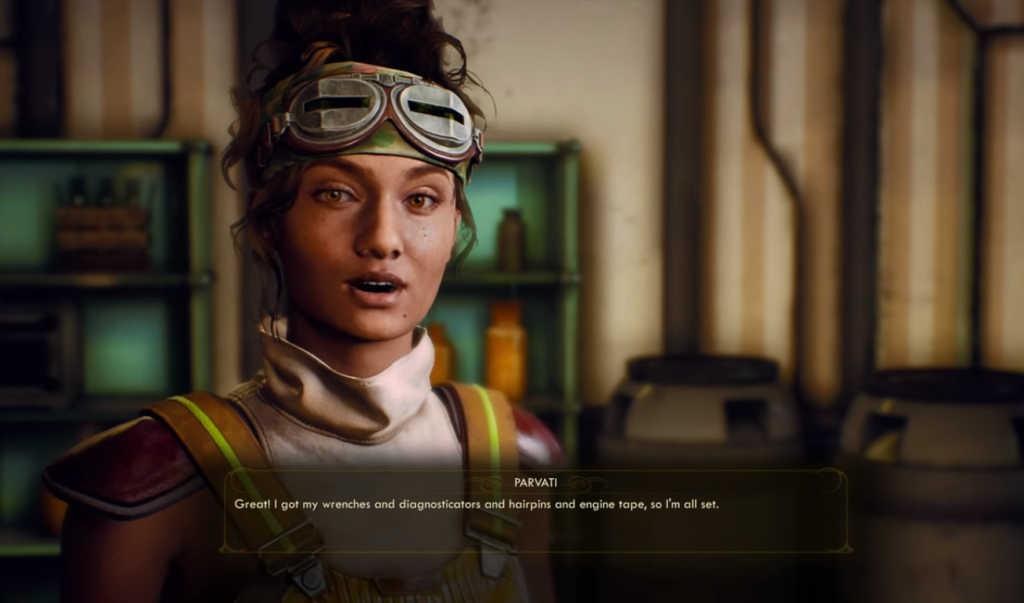 Any type of work is always better with a friend.  In the Outer Worlds, these friends come in the form of companions.  There are a total of 6 companions to be found throughout the game.  These companions each have a skill tree and skillset of their own.  Meaning each companion will be useful for different situations.  Are you the type that shoots before you ask any questions?  Pair up with a companion that has good charisma and you might not have to shoot quite as much.  Need someone with good creativity and lockpicking, maybe your companion can help with that!

Some of the skills that your main character can learn have a passive effect on your companion which means you need to take great care when applying those skill points.  Not only can these companions be kitted out from head to toe, but they each also have their very own personality and back story.  As the story progresses and you find yourself moving to different planets, so the companion story arc evolves as well which makes exploring their story and missions fun and satisfying in their own right! 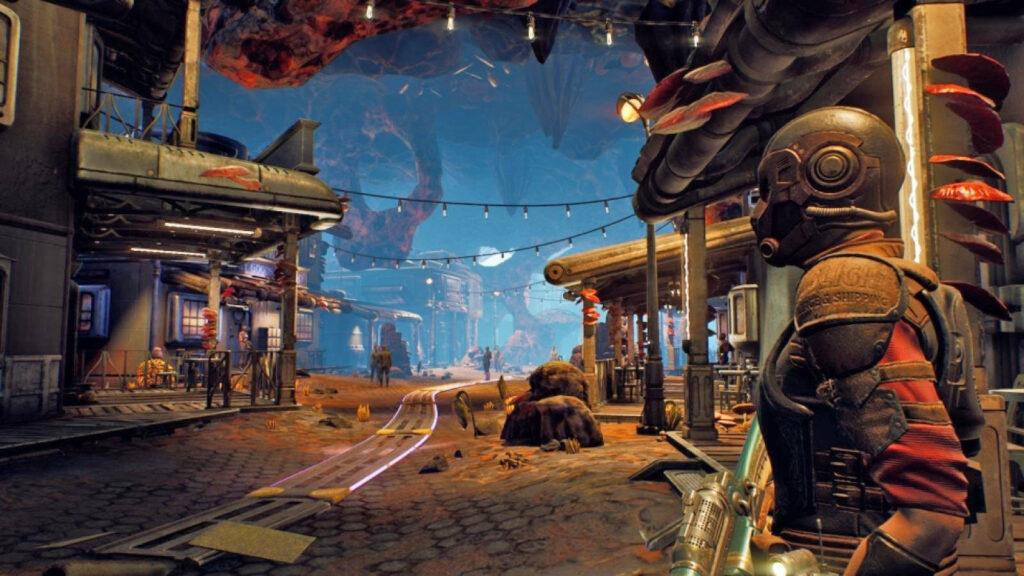 Although I reviewed The Outer Worlds on the original Xbox One, it still looked wonderful,  colours are bright and vibrant, the worlds all look so contrast and the way each towns design and feel just add to the message they are trying to send is splendid.  Player models and faces are some of the best I’ve seen from a game of this type!

At its core, The Outer Worlds doesn’t change much from the recipe that Fallout has created, and that shouldn’t bother many people, in fact, it should welcome a few of those who are hesitant about this game.  What does help its cause is the stellar performance when it comes to the story and the narrative.  Not only does it provide a great compelling story which I WANTED to follow and see through to the end.  It gives you tons of quirky and fun moments within the story.  To go with that is the brilliant cast of characters that you meet and come to love or hate as you go through this game.

The Outer Worlds is easily the best and most polished game of its type.  It takes from other games in the genre and identifies stumbling blocks and strategically sidesteps them with ease.  The Outer Worlds also does not overstay its welcome, it is long enough to have you engrossed without boring you.  It might lack the sheer size of a title like Fallout but that is one of its greatest strengths, biting off smaller pieces and making sure each and every one of them is perfect!

The Outer Worlds delivers a thought-provoking story that will have you laughing and taking on some difficult decisions within moments of each other!  A roller-coaster ride worth taking!  Could this be one of the best games of 2019…  Most definitely!