Turtle Beach is not a new name when it comes to gaming.  They are known as one of the leaders when it comes to headsets, especially in the console market, with their headsets starting at good quality and affordability, to their more elite headsets that go toe to toe with all the other “pro” headsets on the market.

Recently, however, Turtle Beach has stepped out of its comfort zone and decided to take the matter into its own hands, or rather – your hands.

The Turtle Beach Recon controller was recently released, and we got to spend some time with it in a very hands-on review (sorry, that’s the last one – maybe…).

Here’s what we have to say about it with our Turtle Beach Recon Controller review.

From the box to the look and feel of the controller itself, we can see that Turtle Beach means business with their breakout onto the controller market.

The Recon Controller comes in two colours, black and white, with both versions being identical in design, features and feel beyond that.
In the box, you get the controller itself (thankfully) with a 3.5mm jack, a 3m USB-A to USB-C braided cable and a little info package with a quick use guide, sticker, and more in-depth guide for those really looking to get the most out of the controller.

Having already listed the braided cable, the Recon Turtle Beach is a wired controller.  Take what you will from that, both wired and wireless have their pros and cons.  The 3m length of the cable does mean that you can sit pretty much where you want, within logical reason, without the wire limiting you.  I, personally, have no issue with wired controllers and at least it prevents that dreaded mid-game dead battery panic.

All of this is neatly, and securely, packaged in a box that shows you exactly what you’re getting.

The Recon Controller is not just a standard controller.  It comes loaded with a host of features and literally puts all the control in your hands, all the time.  By this, we mean that there is no need to take your hands off the controller to do anything (except to take a sip of your chosen gaming nectar), or to take those critical seconds in a non-pausable online game to adjust sound settings in the console menu.

These features are listed and explained below.

FATIGUE-FREE AND COOLING ERGONOMICS – the Recon Controller has put a lot of thought into its in-hand comfort and ensured that buttons (including all the extra ones) are in easy to reach places so that there’s minimal strain and fatigue on your hands, ensuring that you can game for longer.  They have also added cooling grips that increase airflow between your skin and the controller surface to help those of us who suffer from chronic sweaty palms (GG Turtle Beach).

SUPERHUMAN HEARING – Turtle Beach has included their signature feature from their headsets onto the Recon controller.  Superhuman hearing essentially highlights certain game-critical sounds for the user, like footsteps, reloads, and vehicle noises.  This can be easily turned on or off with a button located at the top of the controller.  Turtle Beach tested this feature on over 100 gamers and found that it kept gamers alive for up to 20% longer and improved the test group’s K/D by up to 40% on popular FPS titles.  Those may be some bold claims, but they have the study to back it up.

TWO REMAPPABLE QUICK ACTION BUTTONS – arguably one of the best features on the Recon Controller (especially in my opinion) are the two extra buttons on the bottom of the controller. Compared to other controllers with these extra remappable buttons, I found that my fingers sat comfortably on these without having to readjust my grip (thank you, ergonomic design).  These buttons can be remapped to any of the other buttons on the controller, including stick clicks, and increase your speed of play by keeping your thumbs where they belong, controlling the movement.  You are also able to save up to 4 profiles of remapping to allow you to quickly change between games without going into a lengthy settings search.

PRO-AIM FOCUS MODE – one of the remappable button’s defaults settings is the pro-aim mode.  This feature tunes your thumbstick sensitivity to assist in enhancing your long-range accuracy.  Now I feel like I need to say this quickly – this is NOT aim-assist or aim-bot.  It merely slows or adjusts the sensitivity of your stick to one of four pre-determined settings to slow down on-screen movement.  A feature very similar to that on many gaming mice (mouses?) where it halves, or freezes, your DPI.

ON CONTROLLER SOUND SETTINGS – the Recon controller allows you to adjust game and chat volume (only on Xbox) right from the controller.  No need to lift your hand off the controller to change volume or go into settings to get the right balance of the game to chat ratio.  You can do it easily, while on the trot, with the rockers at the top of the controller.  You can also quickly mute your mic from the controller – great for all those gamers who can’t seem to locate their mute function when they’re crunching on their chips or cookies while you’re trying to snap on heads, now it’s right under their nose – literally. 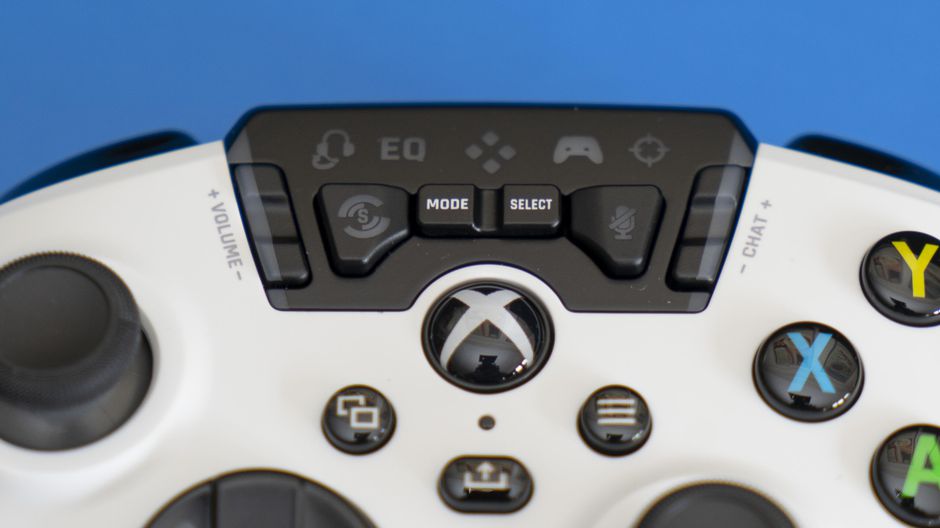 SOUND EQ CONTROLS – Turtle Beach has included four sound EQ profiles for you to further fine-tune your gaming experience.  These profiles are as follows;
1 – Signature sound (let Turtle Beach work the way it was made to).
2 – Bass boost.
3 – Bass and treble boost.
4 – Vocal boost.

From first opening the box and getting my hands on the recon controller, I was impressed with its design and build quality.  Turtle Beach really did not cut any corners with this, and it shows in the overall quality of the product.

With me having rather large hands, I found all the buttons and controls were well within the comfort and I did not have to hold the controller in some weird, contortionist way to make full use of what the Recon is giving me like I have had to do with other controllers on the market with extra buttons.  For those of you with smaller hands – I let my wife have a good go on the Recon as well, and she also found the buttons easy to reach and the controller comfortable and easy to hold.  This really is a “one-size-fits-all” kind of controller. 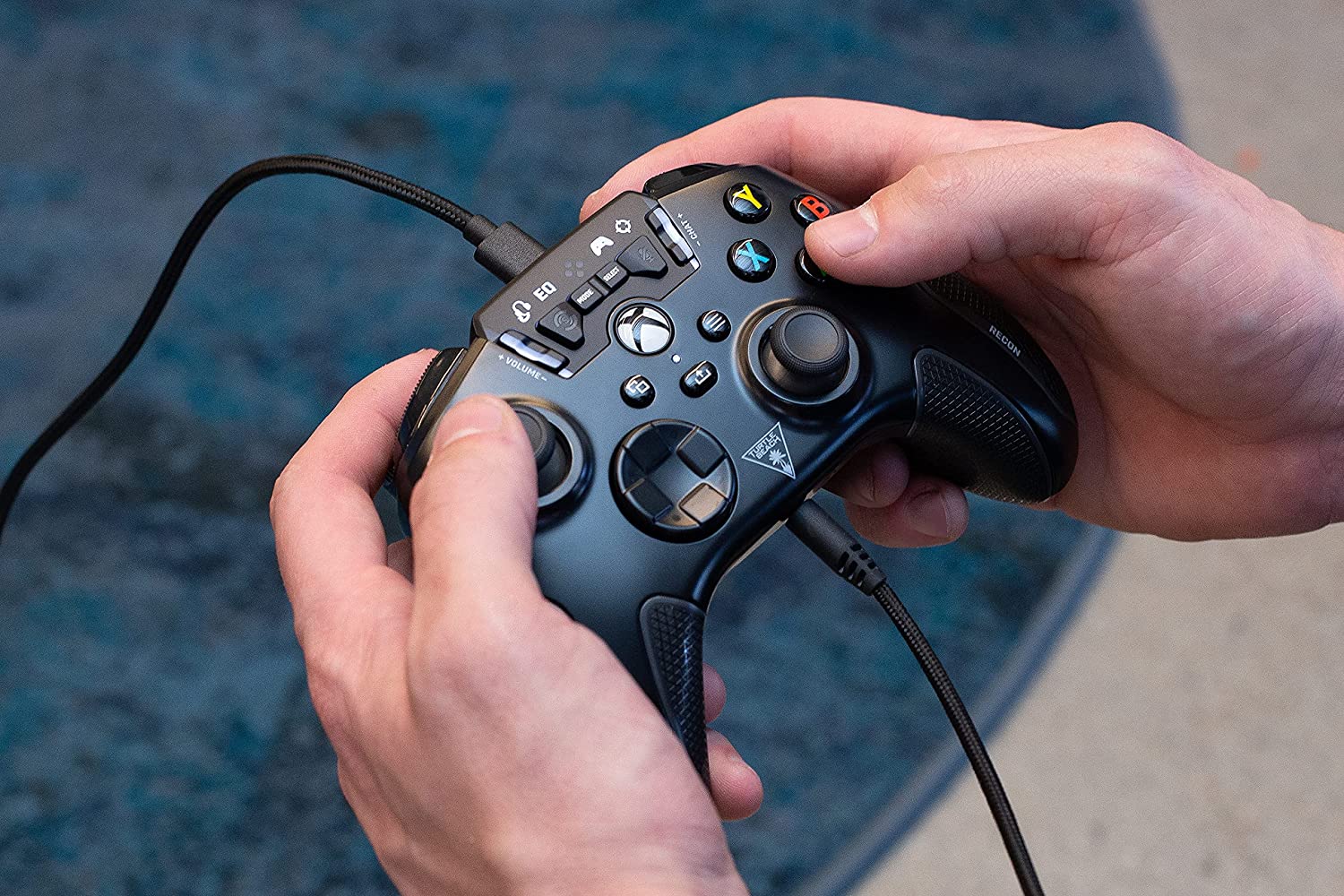 One small hiccup I found while using the Recon was the plethora of fine-tuning, customize your gaming experience settings that it comes with.  My hiccup was not with the actual settings or a sheer number of them, I actually think it’s great that there is so much you can tweak and tune on it.  The hiccup came with my memory of what each one was or how it would benefit me…
So the Recon controller does have a bit of a learning curve, at least for me it did, and I found myself often consulting the guides.  At first the longer guide and then the quick guide – I am learning and now don’t really need to look at the guides at all.  My only advice to first-time users would be to keep the guides close, and then easily accessible if you don’t use it for a while – think coming back to an RPG you haven’t played in a year and trying to remember what you were doing?  That’s the feeling I think you’d get with this one.

While the Turtle Beach Recon controller does have the extra remappable buttons, this controller is by no means a “pro” or “elite” tier controller.  That doesn’t mean it’s bad at all though.
Just keep that in mind if you buy it expecting to get a Wolverine or Elite controller.

What the Recon Controller is though, is a well-made, good controller that comes in at a very reasonable price (around R1300 at the time of this review).
If you are looking at replacing your current Xbox controller, upgrade your gaming experience or to try and improve your skills, I would definitely recommend the Turtle Beach Recon controller to you.  If wires aren’t a thing for you, and even if they are – get over it (literally), you cannot go wrong with getting this controller and I guarantee that you will see improvement in your overall gaming experience.

In closing, I feel that the Turtle Beach Recon Controller gets a very solid 8 out of 10 stars.

For more on this controller, have a look at this preview video from Turtle Beach themselves.

Thank you to Apex Interactive for giving us the chance to get hands on (that really is the last one now) with this awesome piece of gaming tech!