The X570 chipset motherboards have been around for quite some time since the Ryzen 3000 series actually.  Although it has been around for a while, it is capable of handling even the latest Ryzen 5000 processors, all thanks to a simple BIOS update.  The ASUS ROG Crosshair VIII Dark Hero motherboard is the latest iteration of the X570 chipset board.  Although ASUS has released a Crosshair VIII Hero in the past, the latest version of it has taken what everyone loved about its predecessor and improved on the power, cooling as well as colour accents that is mentioned in the name.

Obviously, with the ability to work on the new Ryzen 5000 series processors, it was very nice of ASUS to send us the monstrous Ryzen 9 5900X which is a 12 core 24 thread monster.  We are not reviewing the 5900X in this article but here is the start for both the Ryzen 9 5900X as well as the ASUS ROG Crosshair VIII Dark Hero. 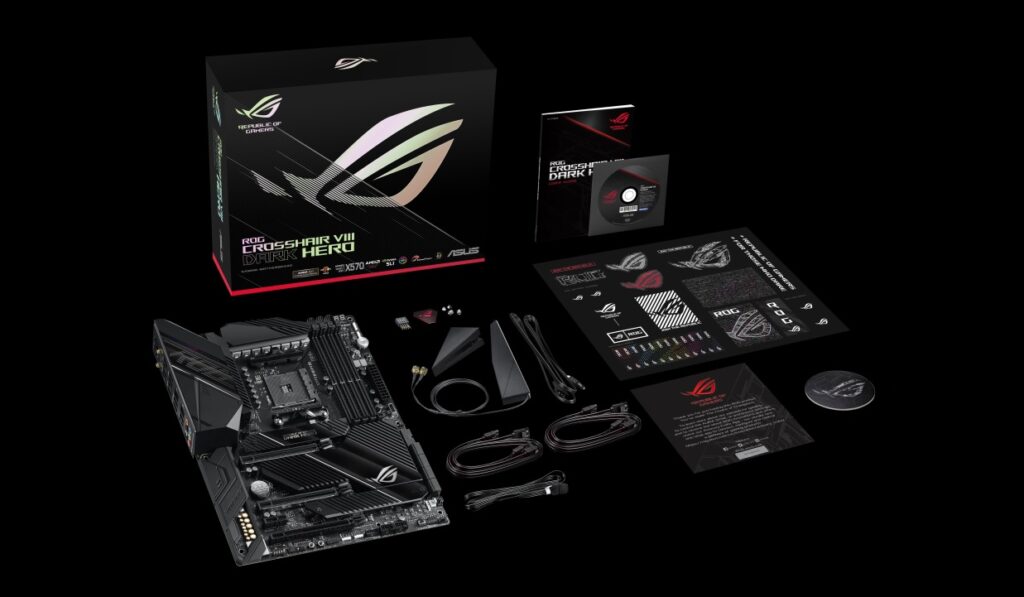 The packaging is as expected for ASUS ROG, utterly premium.  Inside the box, you will naturally find the ASUS ROG Crosshair VIII Dark Hero motherboard with a host of many other goodies.  Apart from the needed documentation and driver CD, there is the newly designed WIFI antennas, 6 SATA cables, a large ROG sticker, Q-connector to make the pesky case IO plugs more bearable to plug in, extension cables for both RGB strips, as well as addressable LEDs, a really good looking coaster because we all need refreshments while gaming, a package with a few screws for your M.2 drives and last but not least, a ROG Thank you, Card.

Taking a closer look at the newly refreshed ASUS ROG Crosshair VIII Dark Hero, we do notice a few changes, albeit very subtle and slight, they do give the latest version a very classy and refined update.  Small changes have been brought to the new ASUS ROG Crosshair VIII Dark Hero like the heatsinks now are ribbed and the beautifully brushed black is centered by the ROG logo that lights up with RGB from behind.  The IO heatsink now also has ROG on it which also lights up with RGB.  The IO shield, which is usually loose and often a nightmare to get aligned or even worse when you realize you forgot to install it, is now fixed into place.  Even when running in “stealth mode” as ASUS calls it, with no RGB, the ASUS ROG Crosshair VIII Dark Hero fits perfectly into nearly any build that does not favor a white build. 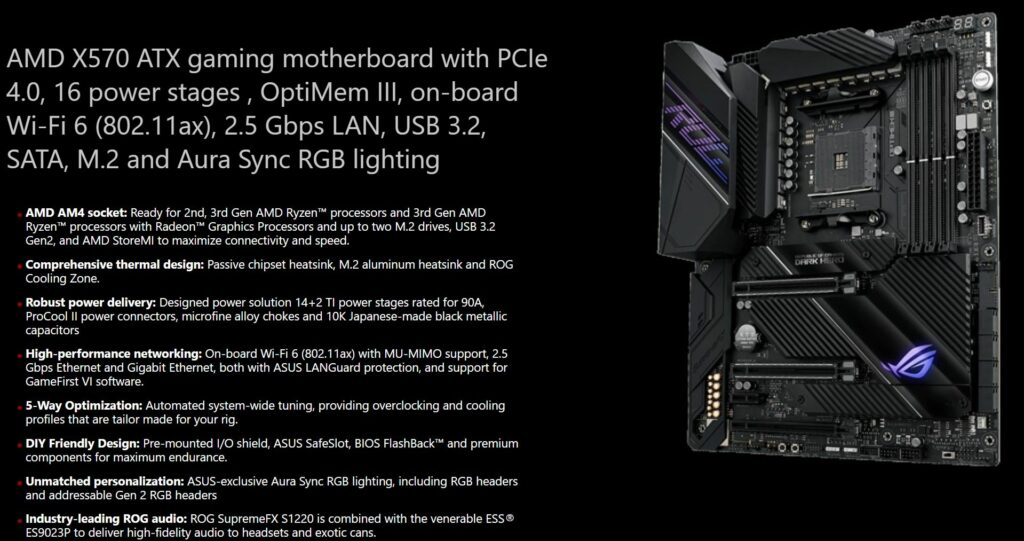 Taking a closer look at the board, we see much like the Z590 board we previously reviewed, the 8pin power plug is situated to the left top, next to it is the (optional) 4pin.  The ASUS ROG Crosshair VIII Dark Hero has four RAM slots, with a maximum capacity of 128Gb at overclocked speeds of up to 5100, we did not get brave with our Corsair Vengeance Pro RAM and we decided to stick to the sweet spot of 3600MHz.  Right above the RAM slots, there are the first three fan headers, they are marked CPU_OPT, CPU_FAN, and AIO_FAN.  The fan headers on the ASUS ROG Crosshair VIII Dark Hero are all clever enough to recognize if they have a DC or PWM fan attached.  Just to the right of these, there is the Q-code LED display that will display codes that can be used to diagnose POST issues or BOOT issues, fortunately, we did not experience any such issues. 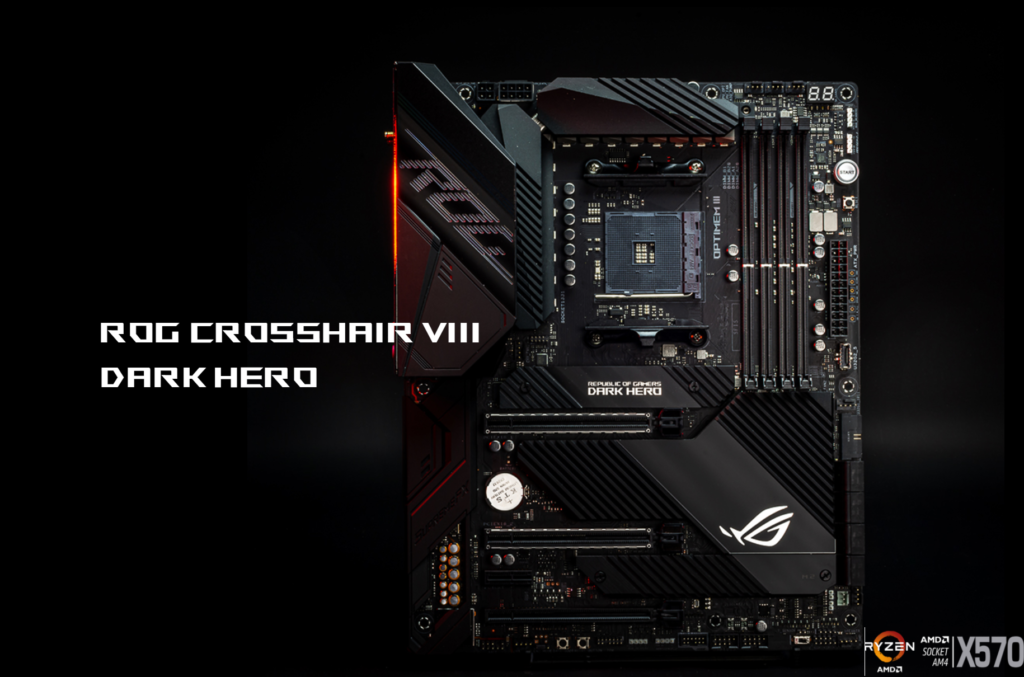 Moving further right we find the first set of ARGB and RGB headers, the other set is found at the bottom of the board.  These can be used for LED strips etc.  Next up is the reset button, followed by the 24-pin ATX connector, some voltage measuring points follow below for those who want to do some onboard measurements.  Right underneath these is the front panel USB port which is a USB 3.2 Gen 2 Type-C header. 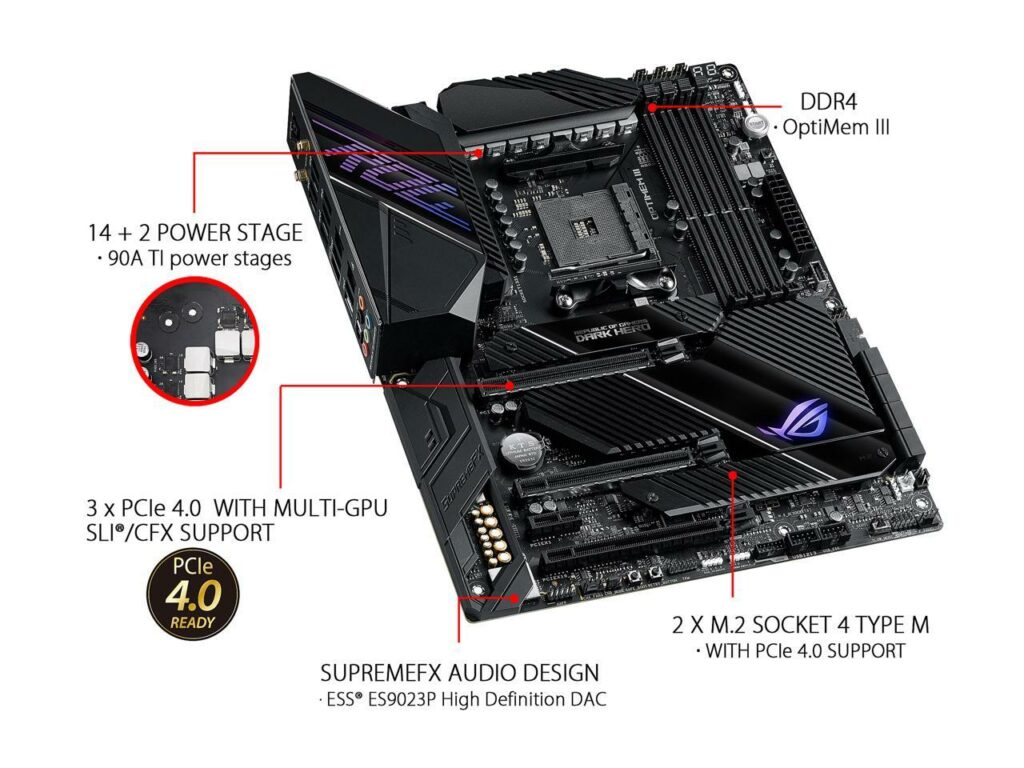 On the right end, there are eight SATA ports, the front panel USB3.2 Gen 1 header, and a case fan header.  Below that is the ROG water-cooling header zone.  Two 2-pin temperature sensor headers, 3-pin flow rate, and a 4-pin dedicated water-pump header.  These headers all send info to the AI suite software so that you can check everything from flow rate to coolant temperatures in your custom water loop.  Along the bottom of the ASUS ROG Crosshair VIII Dark Hero, there are a whole bunch of buttons and headers, is the front panel audio plug, more 4-pin fan headers, Safe Boot button, TPM header, the second set of ARGB and RGB headers, Node header, two USB 2.0 headers, and the system panel header. 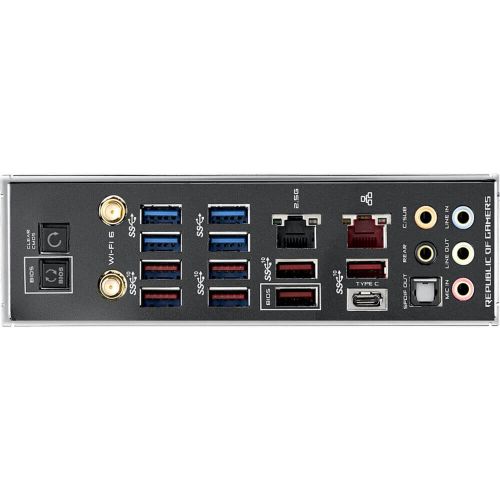 Finally moving to the rear IO.  Most noticeably is the plethora of USB ports.  With a staggering 12 found on the rear IO.  Eight of these are USB 3.2 Gen 2 ( 1 x Type -C, 7 x Type-A) and four more USB 3.2 Gen 1.  There are also 2.5GbE Realtek and 1GbE intel ports and dual connections for the WIFI antenna.  Audio comes in the form of five analog plugs and the SPDIF.  Lastly, there are two buttons, BIOS flashback, to return to default BIOS settings and clear CMOS button.

We paired the already stupidly powerful Ryzen 9 5900X and ASUS ROG Crosshair VIII Dark Hero with the very powerful ASUS ROG Radeon RX6800 GPU which performs wonderfully together thanks to AMD’s new technology allowing AMD CPUs and GPUs to share bandwidth for even better performance.  The games that we used to do our benchmarks were:  Metro Exodus, Battlefield 5, and the ever-present Shadow of the Tomb Raider.  We tested everything at 1080p resolution and all settings at preset maximum. 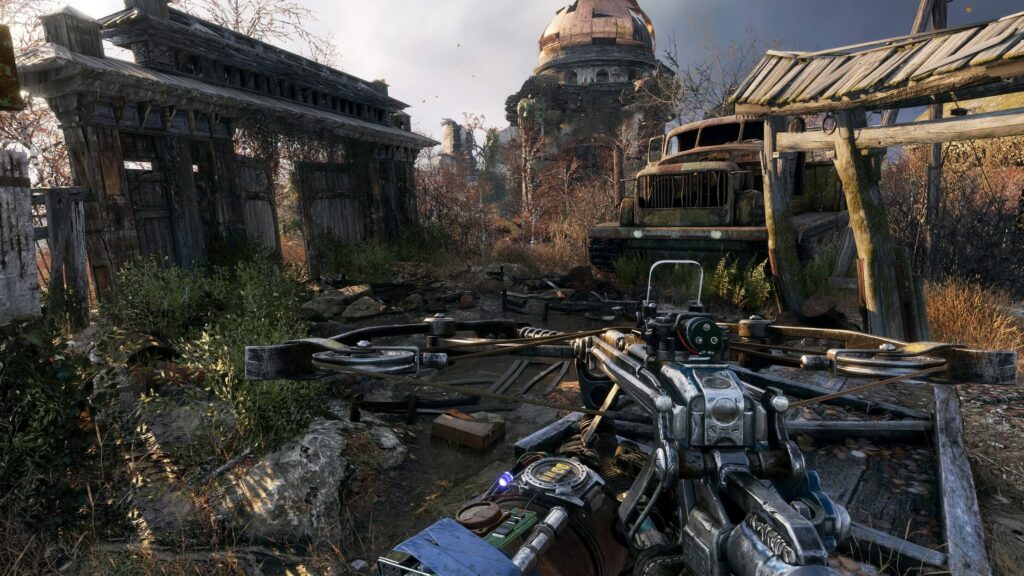 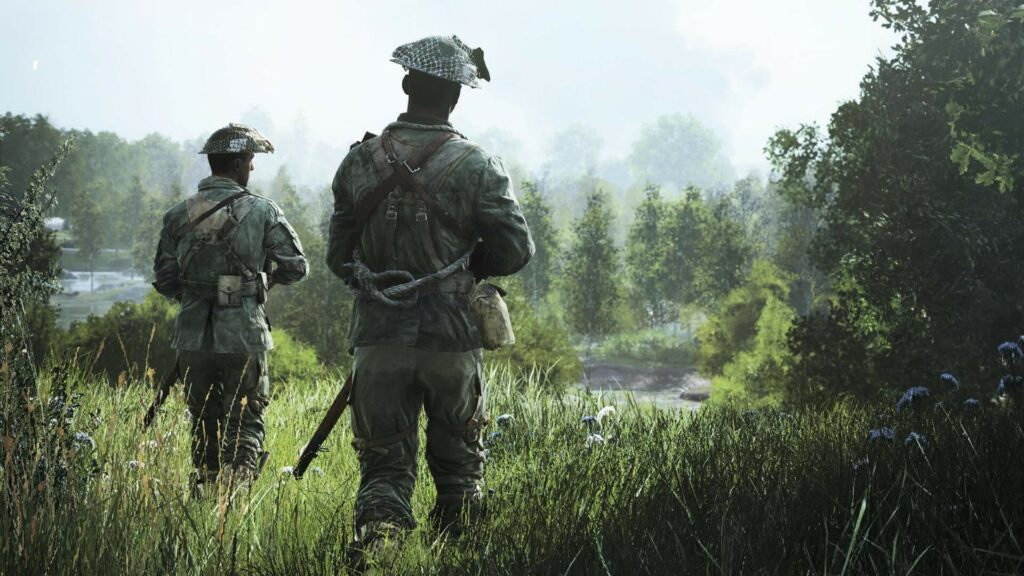 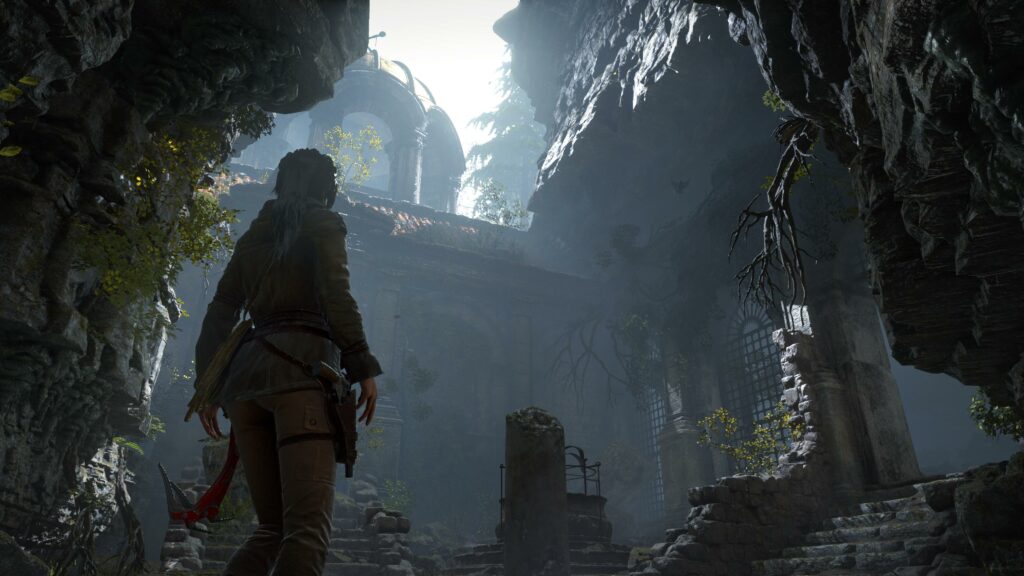 special thanks to ASUS South Africa for the review content 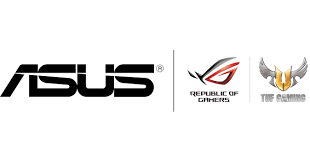