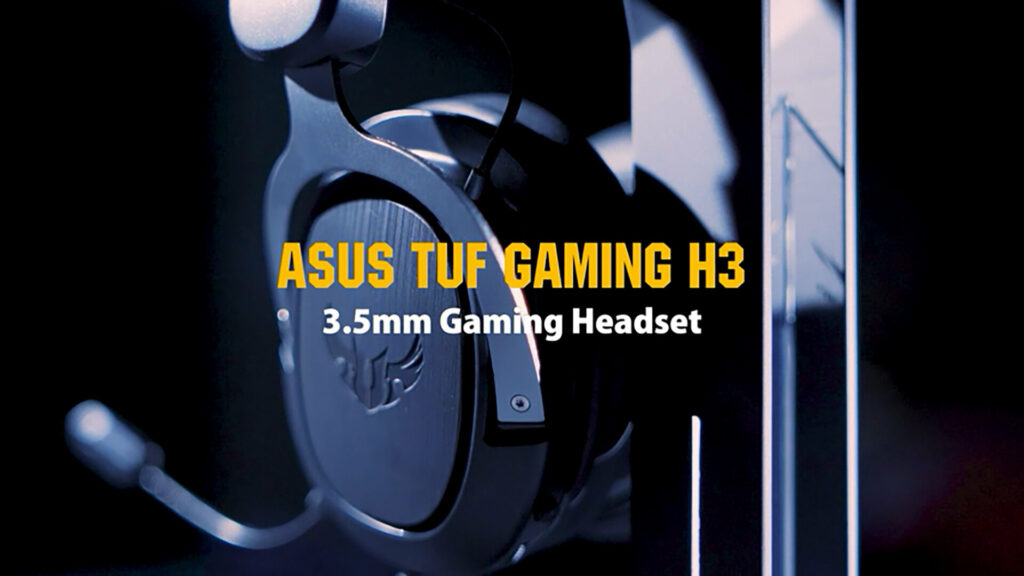 Premium gaming headsets have always had one massive hurdle, their price. There has never been something classed as “premium” at a budget price. The saying goes: you get what you pay for” and this has always rung true for me. When I bought my first expensive gaming headset, an Astro A40 TR with a mix amp, it cost a fortune, but it was totally worth it. Then later I bought something else, for half the price, but just as good. These days, even the “cheaper” headsets are able to compete with the expensive models, although some features might be stripped away. The ASUS TUF H3 is a prime example of that.

The ASUS TUF H3 does not make you jump up and down from the moment you see it. Neither do its specifications. They are not bad, but they are not going to set the internet alight. The ASUS TUF H3 is very understated, even in its appearance. It is primarily black apart from the hinge mechanism which is brushed metal. The elongated combination of textured and smooth plastic feels okay, but not great. The earcups are slightly squared yet oval in shape, adequate for nearly every size of ear. Each earcup is adorned with the TUF logo and the headband, which is leatherette, has the words TUF GAMING inlayed in it.

It is tricky to put into words, but the ASUS TUF H3 does not fill me with confidence when it comes to its build. Yes, the earcups are roomy and are covered in soft leatherette, but the foam is rather thin. The headband has not got the most padding but fortunately, the ASUS TUF H3 is rather light, which offsets the lack of padding. The aluminum swivels of the earcup allow for decent amounts of inward and outward adjustment, but with a clamping force that makes the ASUS TUF H3 suitable for bigger heads only, this adjustment will go to waste for most.

The left earcup features the scant amount of features that the ASUS TUF H3 possesses. There is a volume wheel, that is easy enough to reach and adjust. But the microphone mute, and unmute, button which sits above the volume wheel is a different story. It is rather small as well as tricky to toggle. I often found myself thinking I had pressed it but in reality, I had not pushed it in deep enough to actually click. The click does not fill one with massive confidence of it lasting for a few years. But I suppose this is one of the trade-offs of a budget headset.

The microphone itself is fair, doing its job as well as expected, the arm is very light and moves easily. Fortunately, it does stay in position even when moving my head vigorously from side to side. Rounding out the ASUS TUF H3 is the 3.5mm cable, which is neither braided nor detachable.

Getting past the lackluster build quality and actually putting the ASUS TUF H3 on, apart from the clamping force, or lack thereof, which is a personal preference, they are not half-bad. They fit really comfortably, with a great blend of lightness on your head, while feeling like the earcups are closed off enough to allow for good sound encasement.

This is where the ASUS TUF H3 takes a turn. The build quality and materials used might leave a bit to be desired but for a budget headset, and even compared to more expensive headsets, the ASUS TUF H3 sounds great! Considering that the vast majority of headsets either use USB or wireless technologies, the ASUS TUF H3 is only using 3.5mm and no software to make it all sound better than it actually is. ASUS has managed to tune the H3 really well, the bass is nicely exaggerated while the highs are turned up enough to not lose the clarity.

Jumping into games like PUBG or even EFT where the slightest of sounds like weapon reloads, or even stepping on glass is a queue that could mean you getting the drop on your opponent, the ASUS TUF H3 really does well, and in my opinion, outperforms some of the significantly more expensive headsets on the market, without you having to tweak or tune any sort of audio setups.

The microphone on the ASUS TUF H3 is extremely supple like I mentioned before and actually rather long. For this reason positioning, it correctly is slightly different from “normal” headset microphones. Normally I position mine slightly below and to the side of my mouth, but because of the length, the ASUS TUF H3 microphone was sitting in the middle, just below my mouth. One of the features that would significantly help the ASUS TUF H3 is if it had a game/chat mixer, with it not having software to use to manipulate this, a wheel that you could adjust this with would be great, but at a price point such as this, one cannot complain about that.

The microphone does a good job of cutting through during intense gameplay while not picking up significant amounts of background or ambient noises. The ASUS TUF H3 cannot hold a candle next to my Logitech G Pro X with Blue Voice microphone, unfortunately, but that is not a fair competition in the slightest.

The ASUS TUF H3 certainly surprised me. Comparing my attitude towards the little budget headset when I took it out of the box to when I took it off is like night and day. The build quality is a little lackluster but is kind of expected when looking at the price. ASUS had to cut costs on something, and with a headsets primary job being audio, it makes sense to cut anywhere except audio. And that is exactly what the ASUS TUF H3 is. While having a respectable fit and comfortability level, the audio is where the ASUS TUF H3 truly shines and outshines, some of its more expensive rivals. With a great sounding stage as well as full and strong lows, and accurate and pinpoint highs the ASUS TUF H3 really can be the perfect budget headset for multi-platform use, if the build quality doesn’t give in first…

Special thanks to ASUS South Africa for the reviewed product