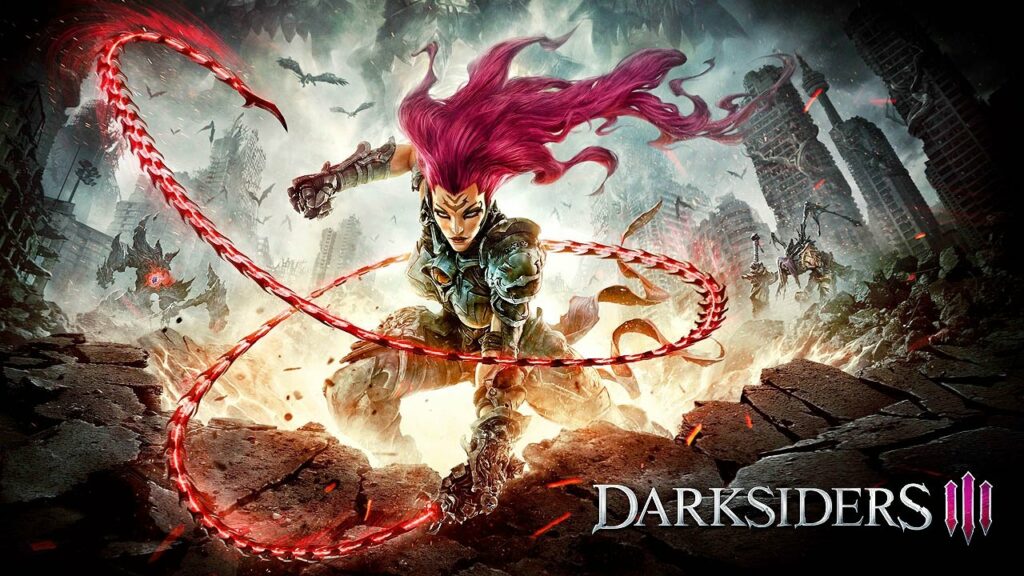 Games in recent times have become all about either having a “massive Open-World” in which to explore!  Or “endless features”, the dreaded “battle Royale” or even “no singleplayer” built into their every grain.  And with good reason.  That IS what is popular at this point in the gaming world.  Darksiders 3 takes all the above and throws them out the window.  No Open-World, no Battle Royale, No multiplayer!  What you get is a third-person hack-slash game that has almost no regard for the “norm” of hand-holding or tutorials.  Darksiders 3 feels nothing to stop your progress right in its tracks throwing a seemingly impossible puzzle or boss fight.  But with some exploration and trail and error, you can move on with the roughly 20 hour story!  In the past decade we have not seen many games not following the recipe of booming open-world exploration and playing Darksiders 3 makes you realize that that is perfectly fine!

For those who have not played any of the previous games, Darksiders puts you in the shoes of the 4 horsemen of the apocalypse.  War, Death, Famine and this time around you step out as Fury!  She is tasked to go and find the Seven deadly sins, which has been released on humankind due to a rather intricate backstory running through Darksiders 1 and 2.  All you need to know is that THE seven deadly sins have been released and Fury needs to stop them all.  Each of these sins are naturally a major boss fight.  The acting can, at times, be rather predictable and somewhat cheesy but this doesn’t take away from the great, yet simple, fighting system that the Darksiders-franchise employs!

Graphically Darksiders 3 can not stand up to the likes of Red Dead Redemption 2, God of War and many of the other major titles of the last year, but Darksiders 3 doesn’t seem to care.  Darksiders 3 takes its stylized cartoonish characters and makes it its own.  The environment does look rather bland and limited but once again Darksiders 3 makes no excuses and just accepts the way it is and keeps moving forward. Hacking and slashing is where Darksiders 3 REALLY excels!  This might be a hack-slash game on the surface but you would do well to not simply meander into a large group of enemies and simply expect to mash buttons and walk out of the fight unscathed, oh no.  For you to survive, even on the easiest difficulty it will require you to observe and place some well-timed counter attacks as repayment for your enemies unkindness.  If you don’t you will be  swiftly punished.  As the game goes on you will eventually build up quite the tell-signs of each type of enemy you have faced.

As you continue through the game Fury will receive many arsenal upgrades which not only gives you new ways to destroy the hordes of enemies thrown at you, but with the expanding arsenal comes new movement powers which will grant you access to areas around the map which you would previously not be able to reach.  This is a clever way of re-using the same map later on during the game.  Being one of the 4 horsemen of the apocalypse you would think that after some leveling up, naturally, Fury would become immensely strong which allow her to make short work of all the fodder-enemies that gets thrown at her.  But no, thanks to enemy scaling, Fury can be thwarted quite easily by normal scrub enemy.  After the first few boss-fights the tables suddenly turn, instead of simply evading and hacking away at the lifebar of the enemy boss, it will feel like you have hit a wall.  None of your coaxing will get the boss to reveal its weakness or “tell”.  But with persistence relief will finally come, I assure you.  In this form Darksiders 3 goes back to old school gaming, where developers were not scared to throw immense difficulty at you, making you work for every inch you get in their game.

Darksiders 3 is not a open-world game, instead it is more old-school.   Leading you from one room to the next all while working towards your main objective.  The next of the seven deadly sins!  During your adventure you will mainly be occupied by killing enemies but there is also environmental puzzles which will keep you occupied for awhile on more than one occasion.

Overall Darksiders 3 doesn’t try to be like anything else.  It knows what it is and what it tries to achieve.  And for that I commend it.  Yes the environment can be a little bland, yes the graphics doesn’t match what has become a standard in the current industry but that is okay because Darksiders 3 is not meant for “everyday” gamers.  Darksiders 3 comes to life when it challenges you, and it really does challenge you.  Yes this can make Darksiders 3 seem rather old fashioned, but with the way Darksiders 3 ends, maybe the next Darksiders can spice things up and bring the franchise to the modern gaming time.

special thanks to Apex Interactive for supplying the review copy