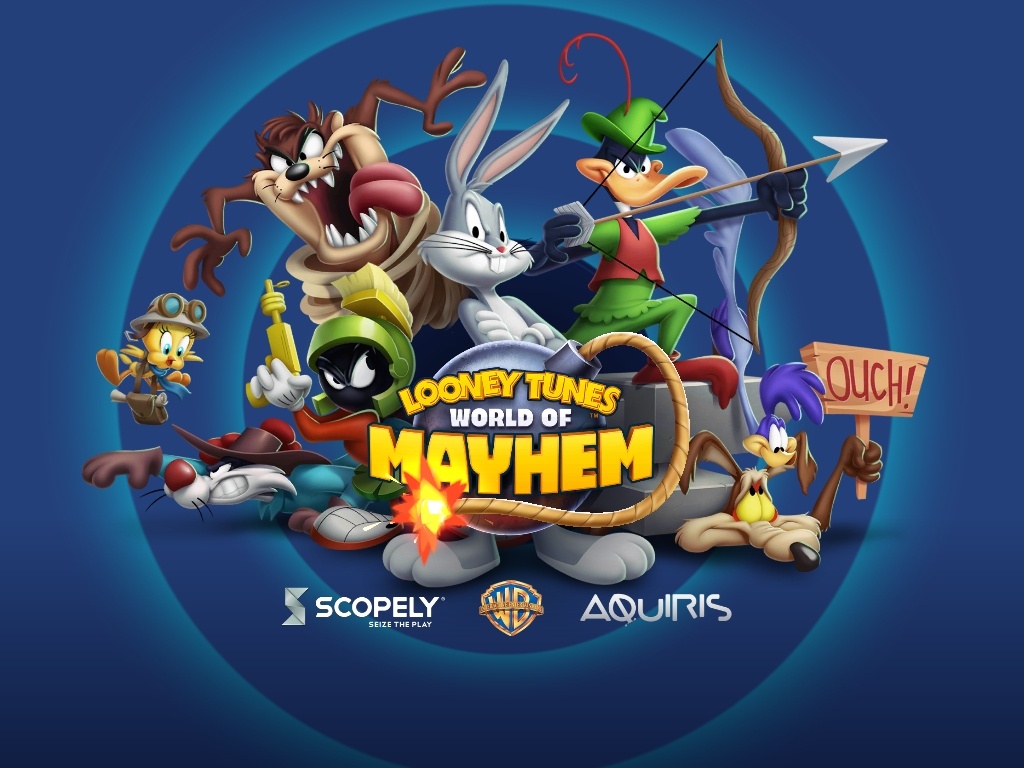 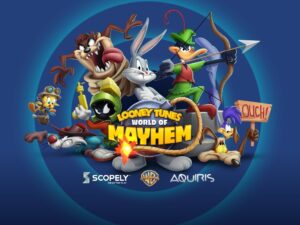 Whether you like it or not mobile games have been on the rise for years. With our smartphones getting more and more advanced with each new version so too are the games that we find on our app stores.

One such game is Looney Tunes: World of Mayhem. A turn-based strategic RPG that includes the familiar characters from the timelessly classic Looney Tunes franchise and right off the bat, it brings a certain nostalgia seeing these characters whack each other over the head with hammers. That slapstick humour is probably one of the reasons why so many enjoyed watching Looney Tunes as a child and this game honours that in every way, from the graphics and art style to the sound and even the materials needed to tune up characters, it’s Looney Tunes through and through.

The gameplay is standard turn-based RPG stuff that we have seen on the app store before. Players level up their toons and build the ideal squad then face off against the AI or teams put together by other players (more on that later) by taking turns utilizing their squads. The formula may be a bit overused for mobile games but it is a formula that is fun and has the depth that causes one to carefully plan their next move. This genre of game is similar to chess. One needs to know how their characters fit in the squad and their strengths and weaknesses. Support characters that buff and heal, Tank characters that taunt and put out heavy damage. Attackers that aren’t so good with taking damage but dish a lot of it out with Area of Effect abilities. The game feels balanced and it’s fun to see a new foe and study their abilities as you try to figure out how to deal with them quickly and effectively. 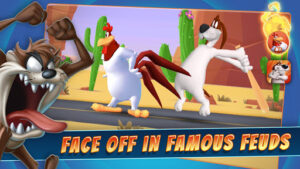 There is a campaign that that involves Marvin the Martian who has captured all the Toons and has made clones which is a clever excuse for so many different variants of the same character. (Bugs Bunny does different things to his clone, Barber Bugs and so on). To collect a character one has to acquire a certain amount of pieces that they get from a currency called “Reatomizers”. The more you get, the higher star rating the character. The depth of the game comes in the levelling up system. By gaining pieces players can evolve the character’s star level. Which levels up their base stats, then there are the XP potions that level them up according to the player’s own level and finally the tune-up levels which add passive skills as well as a boost in ability stats. These require materials like anvils and dynamite which can be gained by completing missions or telling Toons to complete time-based tasks in the game’s cute town building mode.

Luckily, completed campaign missions that have been cleared on a three-star rating can be “auto-won” which skips the fight and gives the rewards at the cost of the energy needed to enter the duel. Each region has specific Toons that are required to complete the missions within that region. So Desert characters are needed for the desert region although there are two separate regions, namely the WB Studios and “Avalooney” regions that don’t have their own campaigns but rather lend their characters to other regions which is a nice balancing technique if a player wants to do a desert mission but lacks any desert characters but has a few good WB Studio characters. 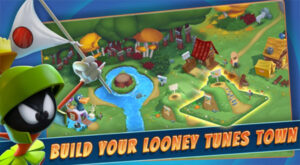 The PVE is fun and with a quick pan of the map, one can see possible future regions in the works, like a Blueprint of a town layout in the corner of the map. It’s no surprise as characters like Taz and Tweety are featured in the loading screen but are not in the game at the time this review was written yet a quick glance at the game’s social media pages shows them in the games art style which is a clear indication they are quickly on their way and judging from the community’s response to the beloved characters, the anticipation sits heavy in the air like an anvil over Daffy Duck’s head.

The PVP is where a lot of fun is to be had. Even more so with the Alliance feature. My friends and I have formed an alliance and partake in PVP events whenever they appear which is at least twice a week. These events are cleverly planned out. For every PVP fight a player does, they get a rating. To earn three stars which is the best rating one can get they need to take out each enemy on the screen. These stars contribute to the clan’s chest which levels up every X amount of stars and with each level up the chest becomes more lucrative. Best of all, once the event is over the chest opens instantly which is a good thing because the PVP isn’t only about taking stars and increasing your league points. It wouldn’t be Looney Toons without some mischief. Each region has a bank, these banks are used to open crates with good ol’ loot inside. But it takes time to open these crates. Players are then required to lay down a squad to defend that crate while the clock ticks because, you guessed it, the PVP is raid based. Your squad defends while a player tries to attack and steal. It’s all about numbers, the stronger the squad, the better the defence. The AI is quite formable so the system works well. 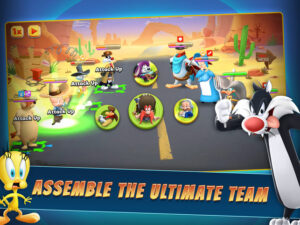 The game’s animation and characters work well. Who knew Looney Tunes would translate into a turn-based game so well? Characters behave just as you’d expect. Granny, the nurturing old lady is a healer. Houston the Bulldog is a Tank. It makes sense in this Looney world. Some of the animations are similar. Bugs Bunny’s basic attack is pulling a lever and dropping an anvil on a character while Wile E. Coyote pulls on a lever and drops a safe on a character but I suppose in a game such as this, too many different animations may be a bit too much. A nifty little feature comes in the form of a fast forward button which speeds up the animations which are perfect for sneaking in a quick few rounds while on lunch break.

There is a ton of things to do in this game besides the campaign, from daily objectives to daily challenges as well as timed events and the PVP and that’s not mentioning the town mode where players have to build dwellings and send their Toons on timed tasks to farm resources. This game keeps one busy. 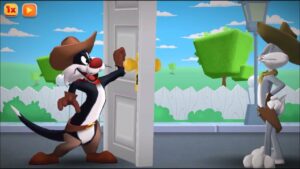 As for microtransactions, the game feels balanced enough to make those feel like a choice and never forced on a player in order to progress which is a thing a lot of freemium and even some Triple-A games have forgotten these days. I have not spent a cent in the game and not once have I felt like I had to in order to enjoy it. The grind is there but it isn’t a ridiculous grind.

The part of the game that does feel lacking is the Town aspect. It’d be nice to see more content there in the form of decorations and more customisable options for our little towns. Seeing the Toons march around in the streets just makes me want to make their world a nicer place to live in. Also, rotating buildings would be a nice touch. 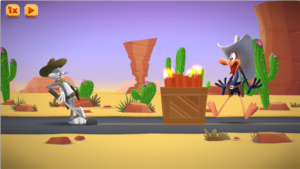 Overall, Looney Tunes: World of Mayhem is as fun as it is chaotic and I’m still surprised how this game has hooked me as it has.  With the copious amount of things to do and earn and making enemies by stealing chests, this game has a lot to offer and it’s even more fun in a clan with friends. Playing this game will make you feel a tad Looney and to be honest, there’s nothing wrong with that.  It’s nice to see these classic characters doing what they do best on a modern platform.  Though I really wish there were more to do with the towns.

Looney Tunes: World of Mayhem gets 9/10 carrots from me. That’s what’s up, Doc.

Looney Tunes: World of Mayhem is free on the Play and App Store