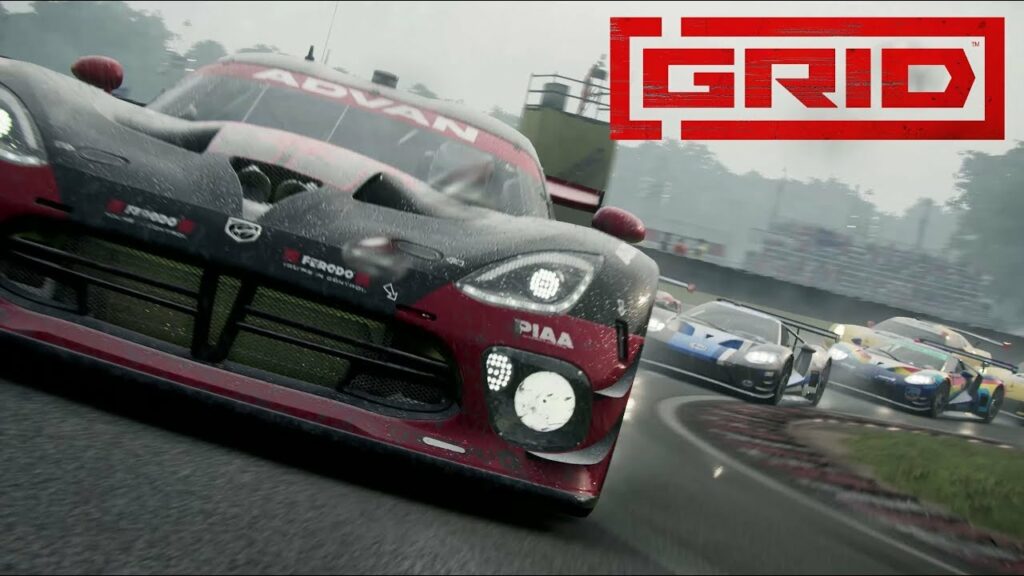 Codemasters, as a developer, has long since prided itself on keeping their games, cars, tracks and mechanics as true to real life as possible, putting them more in the sim racer category than in the arcade racer one, and the same is true with the latest game from them.
GRID 2019 (as it has come to being called by its fans, officially titled GRID) is the tenth game in the TOCA (touring car) series from Codemasters and is the fourth GRID game, following Race Driver: Grid, GRID 2 and GRID Autosport and was launched as a reboot of the GRID franchise. Old hands to the series will be able to pull a lot of similarities and familiarities with this game and the original from 2008.

GRID 2019 is jam packed with some of the most awesome tracks and rides to keep even the most hardcore of petrol head gamers and motorsport fans up to their necks in joy for a long time. 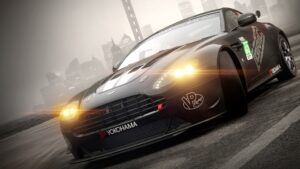 We received the GRID 2019 Ultimate Edition for review. This edition comes with the base game, VIP Pass, passes for Seasons 1 to 3 and the custom GRID Aston Martin Vantage.

Overall, the download size is a little under 40GB, so not too bad by modern game size standards with some games going over the 100gb mark. So – depending on your internet line, you can start your engines within a day or so of starting the download.

All included in this 40GB file is more than 60 cars, ranging from Jedi F1000s to Mini Coopers to Porsche 911s – there really is something for everyone here, as well as some of the world’s most iconic tracks and some “GRID special edition” fictional tracks from 13 different locations around the world. And all of this is just the start, the new seasons will see new cars, tracks and locations added to your game experience.

Upon starting the game for the first time, you are welcomed in with a video of a car accident in reverse, this is the same video used in the trailer shown below.

The video really shows off GRID’s insane graphics and physics and is best enjoyed in 4K goodness on top tier consoles and PCs. Unfortunately, I do not have one of those and my OG Xbox One battled through the video with a few jumps and jitters, although it all still looked really great. After chatting to a friend of mine who was fortunate enough to experience this masterpiece on an Xbox One X, he said the game ran completely smoothly with no jitters and jumps – guess I’m in the market for a new Xbox then.

Once the intro is done, you are thrown right into the thick of things as you pick up the controls in three different race types that give you a taste of what you can expect in your Grid journey.

One thing that does set GRID 2019 from other simulator racing games, and some hardcore fans of the genre might disagree with me here, is the fact that you can adjust the difficulty so that all players across the skills board will be able to get a good measure of fun and challenge out of this game. The settings can be changed from full sim experience with realistic damage affecting performance and no guidelines or other assistance to a more casual arcade-type experience with visual-only damage, corning lines and the works.

I kept the game on its “out the box” setting, which is medium, and put the pedal to the metal.

Once the tutorial is complete, you are thrown headfirst into your quest to become the GRID’s best driver and you can do so while competing in around 100 different events and races in the career mode. 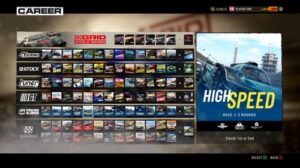 The six different race modes to choose from are Touring, Stock, Tuner, GT, FA and Invitational. Each mode coming with its own set of cars and, with those, its own unique set of challenges and fun in racing them. Each game mode ending with a “Showdown” event that puts the player to the test in the hardest and most challenging races of the mode.

One very awesome feature that GRID 2019 has is the FA mode or rather the Fernando Alonso mode. This mode allows you to race in a wide range of cars from grippy almost go-kart type cars all the way through to actual F1 cars as you challenge Alonso himself to a showdown. Rumour has it that if you beat him, you can choose him as your teammate in races. Hopefully, he’ll be a beneficial teammate – but more on that later. 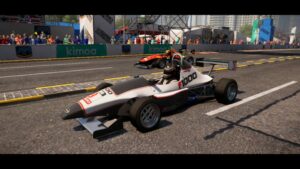 Being more of an arcade racer myself, yes – I’m sorry, and enjoying games like Need for Speed and Forza Horizon (some will say Forza is not arcade) where you can just slam into any corner and drift your way out of it with style, GRID’s technical controls was something to get used to.
Timing is everything in braking and turning into corners and straightening and accelerating out of corners – doing these slightly too early will result in an unplanned meeting with the wall or a hard brake out of the corner to correct yourself while your opponent’s fly past you, doing it slightly too late and you lose all your speed as you brake to compensate or spin out and start trying to claw your way through the pack from the back.

Using your opponents as turning cushions, as I so often do, or hitting into them one time too many results in them becoming your nemesis for that race – meaning their entire strategy changes and becomes more aggressive towards you as they favour running you off the track over winning the race. This seems to be a regular feature for me as I end up having half the pack trying to run me off the road. This being said, the driving AI of GRID is definitely one of the best I’ve seen, and the racers really are good and present a decent challenge at whatever your skill level is.

Each event is divided into two races and your overall times and positioning is taken into account to determine a winner for each race. Some races specify finishing in the top 3 to progress and unlock the next track. Before each race, you have the option to compete in a hot lap to determine your starting position, forgoing this will start you in, or near, the back of the pack. Personally, I found this process a little tedious, but the hot lap does give you good knowledge of the track beforehand, helping you to perform a bit better in the actual event. I elected to skip this on most races and enjoyed the climb to the top – and hitting all the cars on my way past, including my teammate.

The teammate system seems a little useless to me at present as my current team mate, Nick Whittle, is not the most gifted of racers in-game and usually refuses my requests for him to attack for a higher position. This may be because he hasn’t really forgiven me after I hit him in our first race together, causing him to become my nemesis – but this is not yet proven. You can change your teammate in the menu, but I have not yet done that. 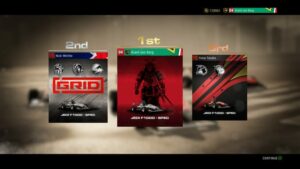 Each race earns you credits, as well as losing some in costs depending on your racing style (mine is rather pricey). These credits can be used to buy other cars to race in other modes or to have more cars, and better cars, to choose from in your favourite events. My recommendation here would be to focus on one or two events out the gate and build up a bit of a monopoly before branching out into the other modes and spending too much of your credit but credits are pretty easy to earn so its up to you how you manage your budget.

Multiplayer is a great way to really test your skills.
All tracks and modes are available to you in multiplayer, you can choose your own and invite friends to it, or join an online session.

As in career mode, you need to have the right cars for the right mode, and these can be purchased through in-game credits once again. Good thing is that all resources are pooled in the game, so cars you own in either career or multiplayer is owned in the other.

Venturing a little into this game mode, I played a few races with an online friend of mine who is a big enthusiast of racing games and a GRID veteran. Playing a few races with him showed me how good this game can be for someone who has really refined the skill into somewhat of a masterpiece. He showed me up in almost every race as he finished first by miles with me following far behind in third or fourth if I was lucky.

It was great playing with him as he often remarked on how similar this GRID felt to the original Race Driver: Grid game.  When probed a little more on it, he said the cars were similar to those found in the original and some of his favourite tracks had returned.  The handling he said was “similar but better” and he looks forward to throwing many hours into this game, both in the career mode and in multiplayer. 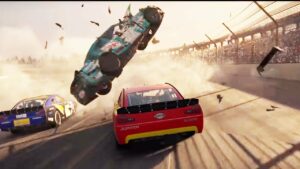 Although this is a game best played on higher spec machines, it runs really well on lower spec ones too.  With only a few jitters in cutscenes – but nothing groundbreaking. This game really does stir the desire in me to get a newer console to really get a true taste of what GRID has to offer visually.

Being a reboot of the GRID franchise, I feel Codemasters has really stayed true to themselves in keeping this as close to the original in what worked and really improving in what didn’t back then. The racing AI is flawless and really presents a good challenge to the player.  Except for the teammate AI – which could probably do with a little polishing.

All in all, Codemasters has done a really great job in creating more than just a racing game. All of the stunning visuals, challenging tracks, awesome cars with realistic engine purrs and screeching tyres, up to date and relevant commentary from your pit crew (who sounds irritated with me more often than not).  Commentators really bring it all together as a great racing experience. This is a game that definitely has something for everyone and everyone from the casual car enthusiast to full-blown fanatic will find something worth spending time on.

GRID is available to own on Xbox One, PlayStation 4 and Windows.   And will be available to stream on Google Stadia when that is released later this year.

A big thank you to Apex Interactive for giving us the chance to review this game. 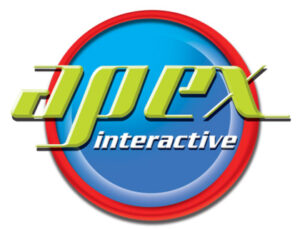