Keyboards are keyboards, right?  They all do the same thing, you type on them.  Some of them might have a few cool gadgets and most these days have lots of RGB.  Many even have an arsenal of options when it comes to the keys.  Be that mechanical or not, and if so, a rainbow of colored switches all with their very own characteristics.   Some are loud and clicky, others are more quiet and tactile.  Basically, there is a switch for everyone…  Furthermore, there are keyboards that provide high keycaps, giving you more travel when pressing the key.  Other manufacturers even do optical switches.  Logitech has leap-frogged all of these and decided to be ahead of the curve…  Introducing the G815 low-profile GL-switched keyboard! 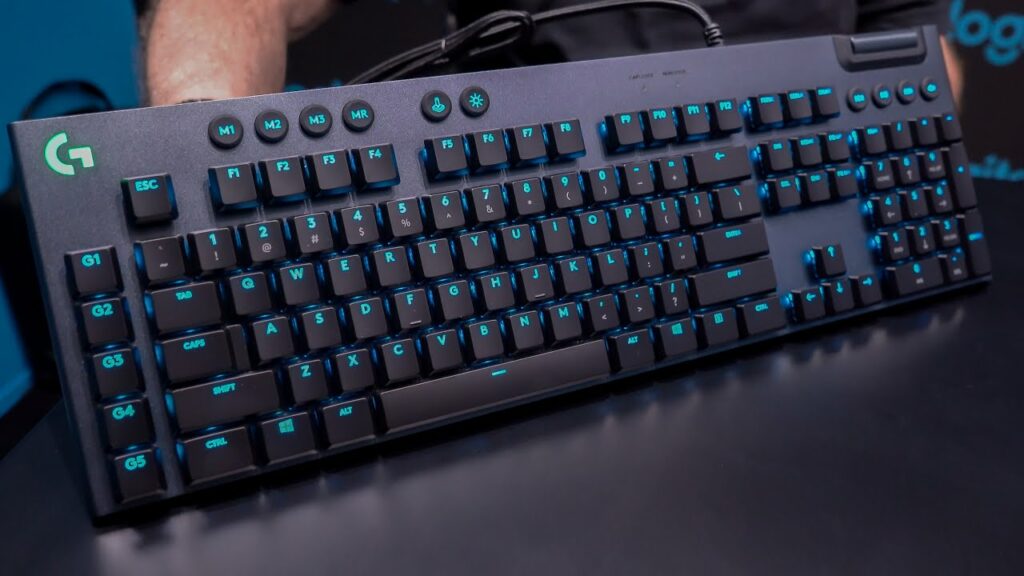 Keyboards come in many shapes and sizes, and some with rather crazy designs and features.  In more recent years we have seen the return of the minimal design and a bigger focus on providing a premium feel.  Much like the Xbox Elite controller stands head and shoulders above the competition due to its sleek design and presence by design, similarly, the G815 radiates thanks to its minimal and sleek design.  The Logitech G815.

The G815 is best described as a rectangular keyboard with perfect square lines, only broken by the wide roller on the top right corner of the keyboard.  The brushed metal finish gives the G915 a timeless and classy finish.  It also does not show finger smudges like the polished black plastic of other models do.  While many might think that the design might be lacking.  After using the G815 a bit it quickly becomes apparent that a tremendous amount of time was put into refining the look while keeping it minimal yet providing all the needed features, macros and media keys.  All of this while keeping the design edgy. 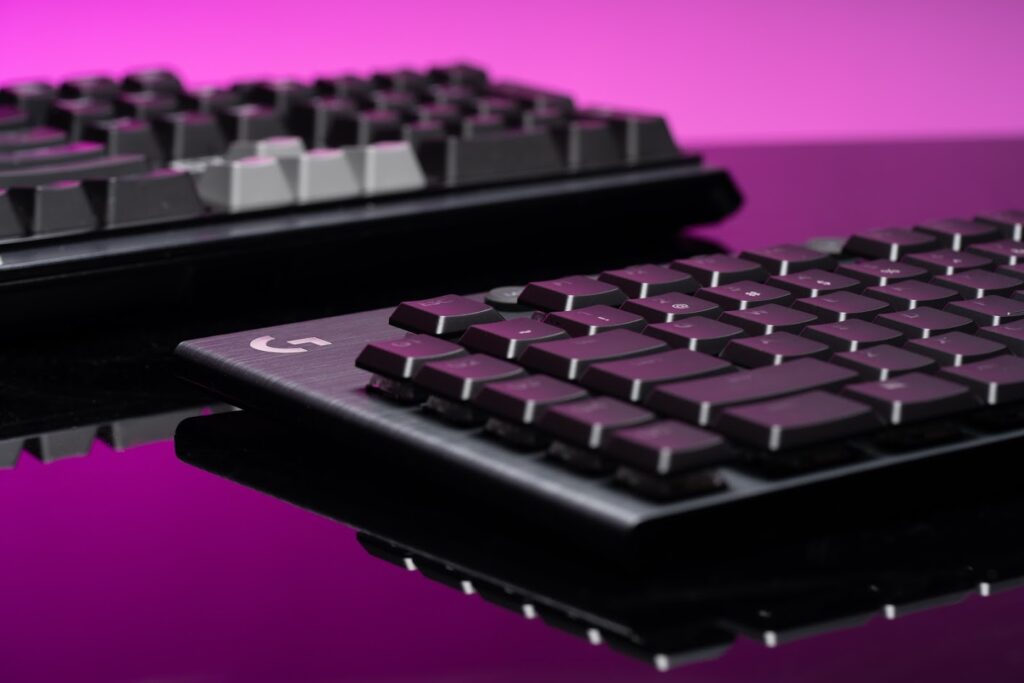 The G815 is extremely thin, at a measly height of only 22mm, Logitech had to do something drastic with their keycaps to get it this low.  And that is what they did.  Logitech partnered with Kailh to produce a new switch, departing from the previous Romer-G’s, and what they created is the GL switch, which comes in 3 variants, clicky, tactile and linear.  This new partnership has allowed Logitech to create a low profile key that allows for lots of travel while not compromising the low profile design, the best of both worlds.  To give you an idea of the travel of these switches compared to normal Cherry switches.  The cherry switches have a travel of 4mm compared to the 2.5mm of the GL.

While we are on the subject of switches, the responsiveness of the GL switches alone is a feature.  While playing any form of a competitive game, we all know that responsiveness is something we all wish we had more of.  Faster response from our own side might mean the difference between winning and losing.  With the shorter travel distance, the G815 really gives you an advantage against the players on non- low profile keyboards.  The G815 also has 5 programmable macro keys situated on the left vertically.  They are perfectly positioned for your pinky to quickly slip off to the side and press that macro when needed.  The spacing and positioning of the keys are perfect.  I had absolutely zero adjustment period.  miss-types were at a minimum and the ones I did have was my fault not due to the keyboard feeling strange. 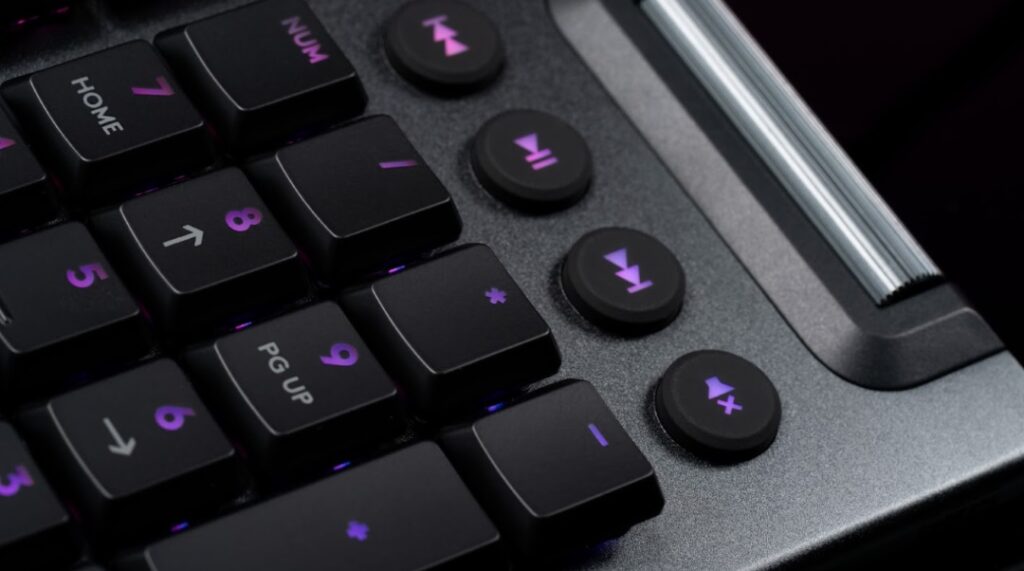 Next to the ever-present Logitech emblem sits four M-buttons, these are profile keys.  The G815 can store up to 3 setups on the keyboard itself, meaning you can quickly jump between games and, with a press of a button, your macros will be switched for that game.  To make it even better is because the presets are saved on the keyboard itself, you can unplug it, take it to a friend, and have your presets with you instantly.

The G815 features 4 media buttons situated under the roller wheel which controls volume.  The wheel might look strange at first but it has a premium feel and allows for the slightest volume adjustments.  Neatly hidden at the top of the keyboard is also a USB-port.  This is very nice when you want to plug an external or a wireless dongle for your G Pro wireless mouse.  It is however only USB2.0 so don’t expect fast transfer speeds. 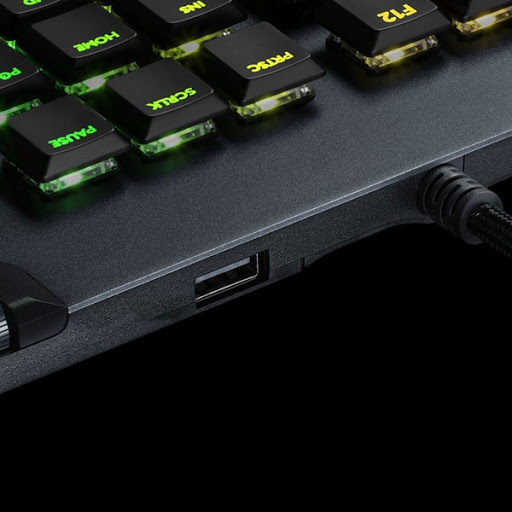 As with pretty much all the Logitech keyboards, the GHub is where all everything can be controlled.  The G815 comes with the usual array of preset RGB options such as the rainbow effect and screen sampler that gives a really neat look, as well as the audio visualizer.  Pair this with other LightSync hardware to deliver a really great look.  The really nice addition is the ability to create your own lighting effects.  It might seem daunting at first but Logitech provides you with a few to start off with.  If designing your own one is not your style, simply download and apply one of the community created ones.  You are bound to find one that you like.

The GHub is also where you will find the key-bind options for your macros.  This is a pretty straight forward process with the Ghub detecting games that you play and giving you options of what you would possibly want on these macros.  Thanks, Logitech, didn’t even know I needed my meds on macro when playing Escape from Tarkov.

Low profile keyboards are often not great for the day to day work and gaming.  If they are they generally take some time to get used to.  The Razer Huntsman, for example, has such a soft touch that I found myself pressing keys without noticing.  Once I was used to it it was a great keyboard, but that was after many backspacing.  The G815 slotted right in and was on point from the first keystroke.  It is a wonderful keyboard to use for typing and the “clicky” variant that I reviewed had just enough click to satisfy without annoying people in the room next door.  On a visual note, the G815 is spectacular and looks great paired with any setup.  Whether you want full RGB, or extremely minimal, the G815 is up to the task.

When it comes to gaming, the keystrokes felt very true and I felt confident in my strokes which most definitely made a difference in my playing.  As a whole, the G815 is a amazing keyboard that not only looks premium, but feels, and plays as premium should.  It is built sturdy and will provide many hours of faultless enjoyment.  The only possible problem with the G815 is its price.  Coming in north of the R2000 mark does put it in the “expensive” bracket.  But if you are doubting whether the price is justified, I can comfortably tell you, it is.

If I could have my pick of any keyboard to have as my daily, this would be it.

special thanks to Logitech for providing the review content