As gamers, we all strive to be the best or, at least, be better than we were before.  Be that improving on your lap time, beating that team that you have always struggled to best, or achieving that higher rank.  All of these things are what makes us gamers.  Like any sport or competition, your tools do make or break your performance.  Having the better equipment might not make you directly better but it definitely does help the cause.  Logitech wants to be your ally by providing a mouse that can take on the best that anyone has to offer! In terms of mice, there are only a few key features that determine whether or not the mouse has what it takes.

Firstly it is the sensor, the more sensitive and accurate the better.  Buttons, be it mechanical or optical, your preference, but speed and response are key.  And finally, weight, as we all know, the lighter the mouse the less effort is needed to move the mouse around accurately, and paired with the above-mentioned sensor a light mouse can be the reason you land that flick shot compared to missing it in the past.

At first glance, the superlight might not look that much different from the regular GPro wireless, and that is because, at first glance, it is the same mouse.  The design is a very simple, symmetrical black chassis with a silver (non-RGB) logo on the palm rest and nothing much else.  No dedicated finger rests or lines or contours to give it a more aggressive look.  The main difference here between thePro X Superlight and the regular GPro Wireless is the omission of RGB, which when used correctly can make for an aesthetically pleasing look, but if you are looking to buy the Pro X Superlight you are clearly interested in function rather than looks.

Most of the other brands of mice that claim to be extremely light, create that weight advantage by either leaving only the bare essentials inside the mouse as well as adopting the honeycomb chassis, which works well but allows for every spec of dust to enter your mouse.  Logitech decided that they will not take the easy way to success and instead decided to redesign their mouse to leave essentials parts and components intact but instead redesign with weight-saving in mind. 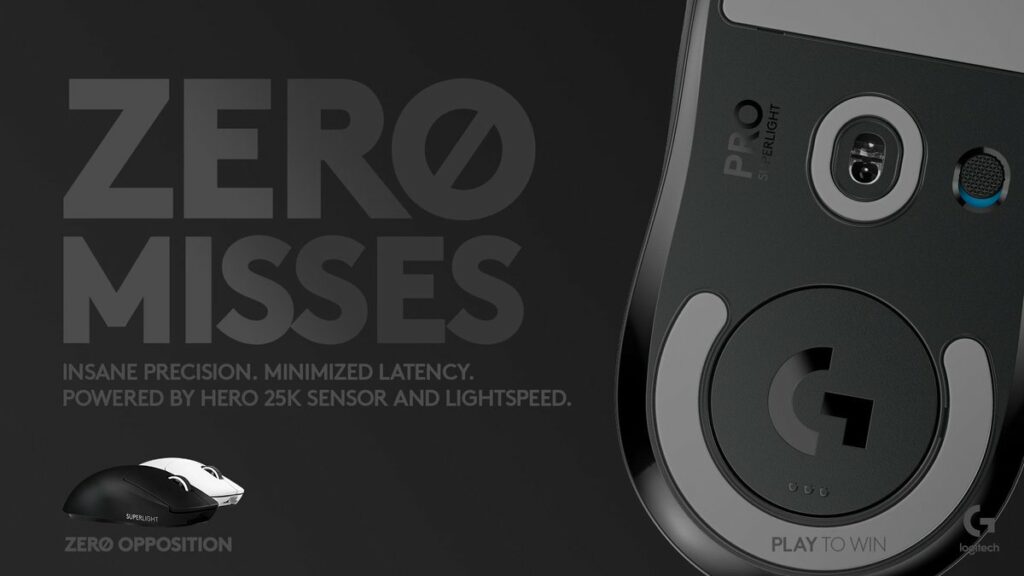 In terms of buttons, the Pro X Superlight features the normal left- and right-click buttons that, according to Logitech, won’t suffer the same fate that so many other GPro’s have suffered.  The dreaded double-click of death.  Logitech has said that the switches have been redesigned and they are sure the dreaded double click issue has been solved.  During my time spent with the Pro X Superlight, I can confirm that I did not have a single clicking issue, that originated from the mouse itself that is, my bad reaction time is another story!  The clickable wheel that features a really good looking white accent is wonderfully weighted and just grippy enough to not go on a roll if your finger happens to slide by it.  There are two inside thumb buttons that protrude enough for your hand to quickly learn where they are.  Even with smaller hands, like mine, I never felt like I had to adjust my grip to ensure I reach the thumb buttons.

Flipping the Pro X Superlight over you will be greeted with the power slider, as well as really large skates, the white plastic skates that adorn the bottom of the Pro X Superlight are there to help this piece of tech slide and glide as smoothly and effortlessly as anyone can possibly hope for.  There is also a compartment that can be opened that has space for you to store your USB dongle when traveling.  And if the large skates were not enough already, Logitech sends a spare compartment cover that serves as another large skate, no need to worry, the extra skate doesn’t add any weight to this feather-light mouse. 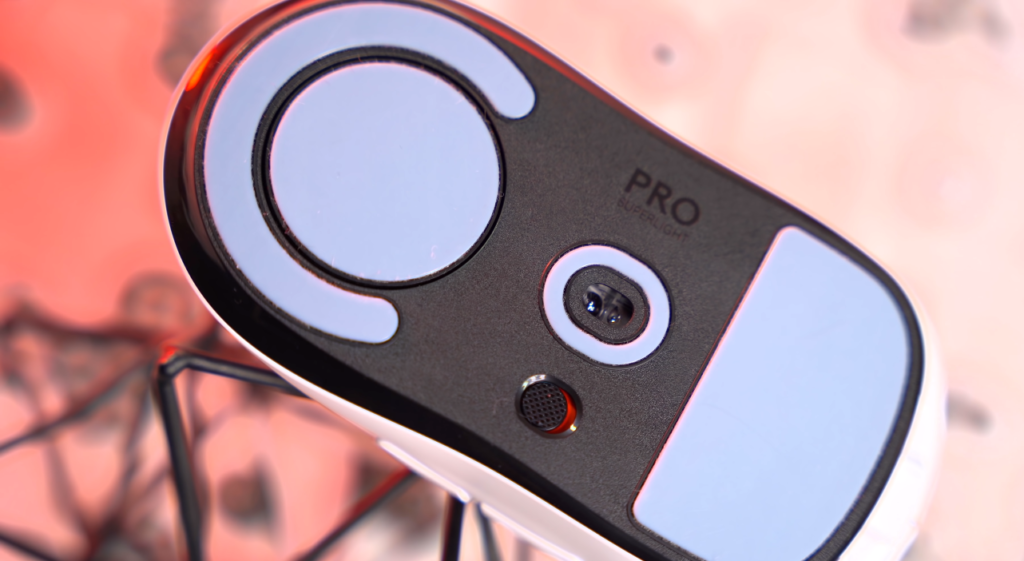 With most peripherals at the moment, the first feature you will notice is the RGB.  With a barrage of options in terms of light syncing and many more, RGB has become a rather large focus for many items.  The Logitech Pro X Superlight, however, features zero RGB, yes you read right!  When you launch the very easy to use and get a grip of, Logitech Ghub, you will be met with the option to select any of the Logitech equipment you currently have in your setup.  Selecting the Pro X Superlight you will see three tabs, a DPI tab that will allow you to utilize the 25k Hero sensor giving you a DPI (dots per inch) range from 400 to 25 00.  You can select 5 steps which are all represented by a certain color that correlates to a LED on the palm to show what DPI step is currently active. 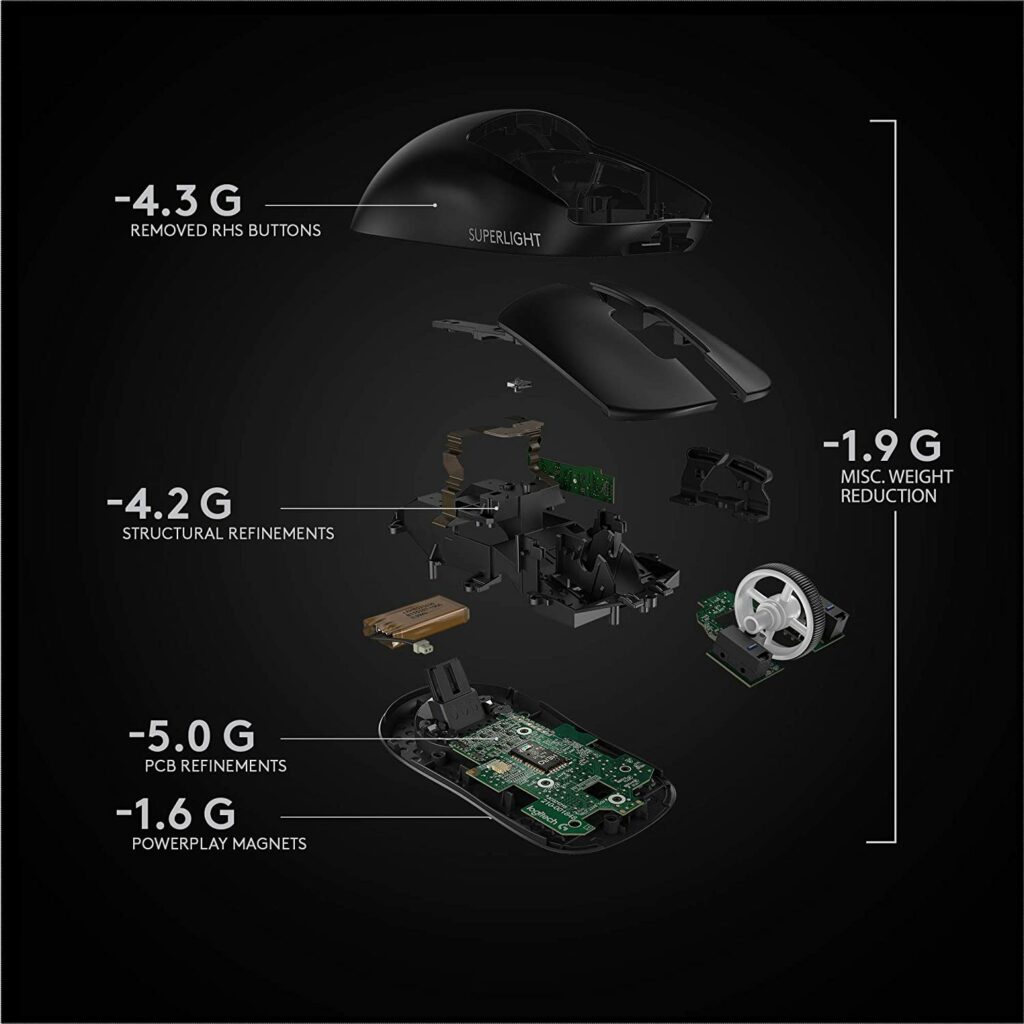 The second tab is the option for you to reallocate your buttons to do certain things.  If you would prefer your right button to not be aim-down-sight you can easily change it out with another button.  This feature runs hand in hand with the next feature, which is the ability to create profiles for each and every specific game you play.  If you have an extremely intricate button setup for your favorite game, but that setup does not work well with your other games, Logitech has you covered.  Ghub is capable of picking up which game you are currently playing and it will automatically switch to the relevant settings that you have saved.

Powerplay is something that Logitech is very proud of, and for those who don’t know, it’s the ability for the mouse to be used on the Logitech Powerplay mousepad which charges it while simply being used on the mousepad.  This feature has become a near-standard in their high-end wireless mice.  The Pro X Superlight naturally has the powerplay feature as well but during the review, we only used the 2.4 GHz wireless dongle.  In the box, you will also be presented with a micro-USB cable that can be plugged directly into the Superlight even when in use.  Another dongle holder that can be placed on your desk is also supplied.  During our time spent with the Pro X Superlight, we did not have to charge it once!  Yes, upon receiving we fully charged it, and nearly 2 weeks later we had not even touched 50% battery left.  Logitech claims that it is capable of doing 70 hours on a single charge, and at the time of writing, we agree! 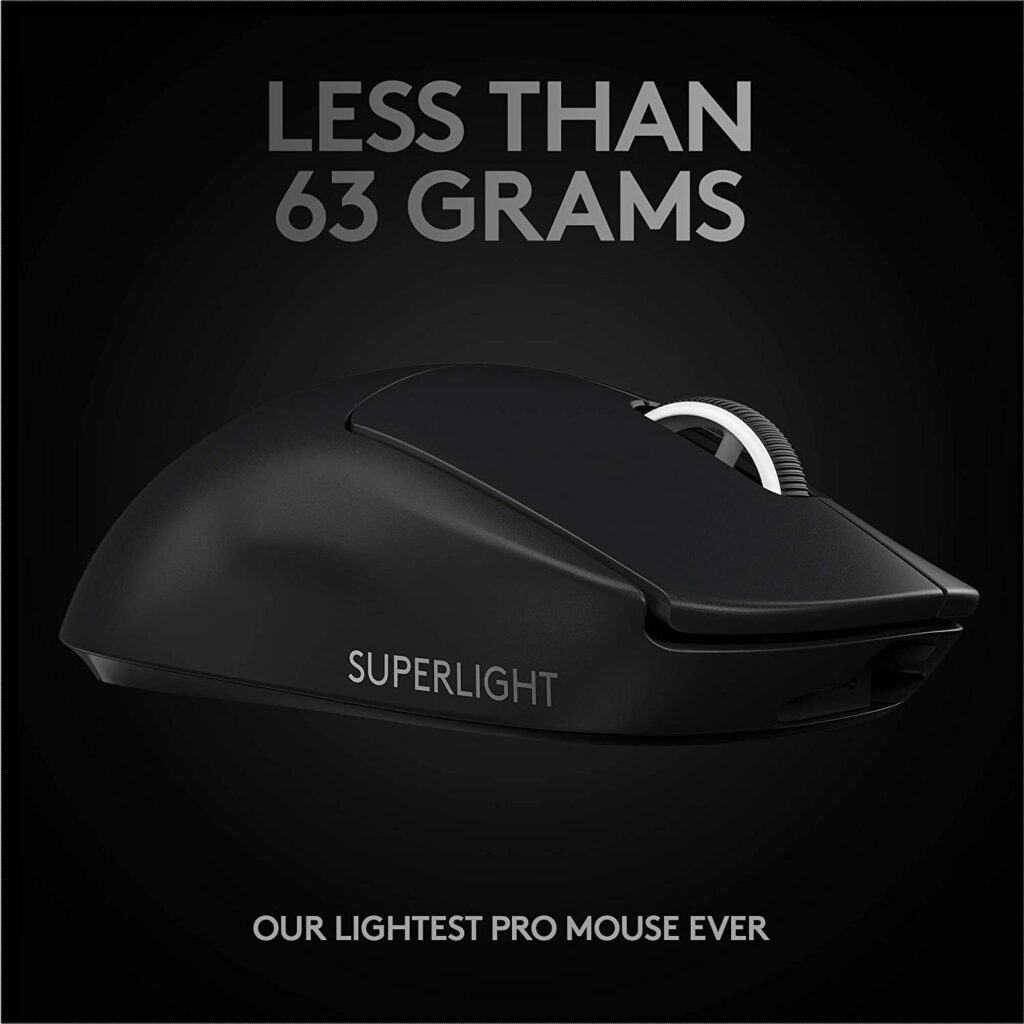 It is very clear that the Pro X Superlight is aimed at the more serious gamer and the esports player and probably the FPS crowd more specifically.  For that exact reason, I thought it would be best suited to test the Superlight in games such as R6 Siege, Escape from Tarkov, and Battlefront 2.  The first and most obvious thing that you as the player need to get used to is the weight.  It is extremely light but once you have gotten to grips with how easily it moves and slides but it is scarily accurate.  The sensor is so accurate and dependable that within a few hours I found myself turning my DPI setting down from 1000 to 600 and instead of small movements I opted for more sweeping arm movements, the results were tremendous!

The accuracy during gunfights in R6 Siege improved my confidence tremendously and I found myself taking on long-range engagements more comfortably.  Any person who has spent some time in escape from Tarkov knows that it is not simply just a shooter, although shooting is what will save your life.  And the Pro X Superlight did save my bacon more than once in a space of 4 to 5 raids.  The ability to scan the surroundings and simply flick to where you spot your enemy and being exactly where you should be has allowed me to pull the trigger first on numerous occasions! 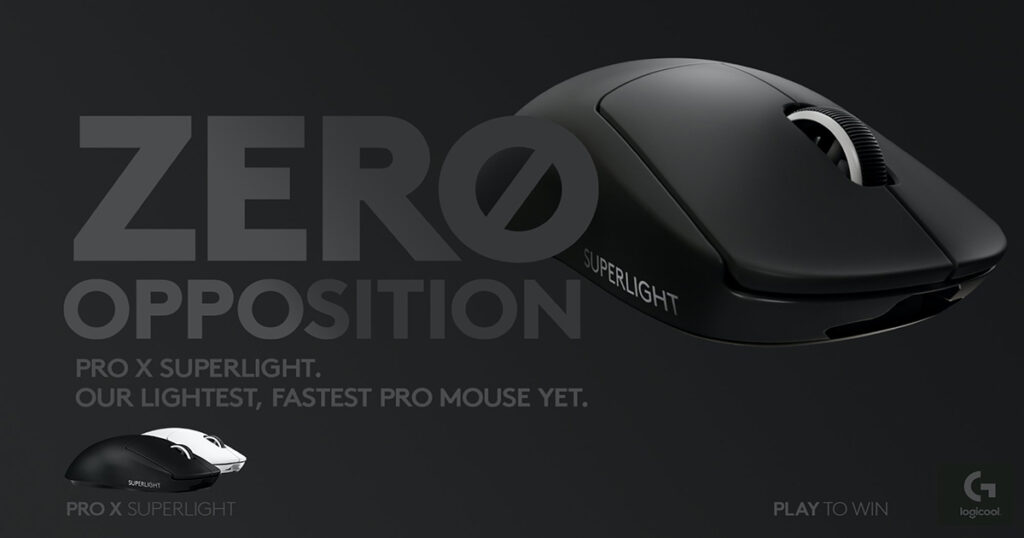 Logitech has taken the benchmark for lightweight wireless mice and moved it once again! Not only has it made a 63g monster that is capable of retaining all of the premium builds and feels it was capable of cramming all the needed features and superb performance into that same package.  The Pro X Superlight might look identical to the GPro Wireless but the Pro X Superlight is much more than just a GPro Wireless on a diet.  It is testimony to what Logitech stands for.  Taking a great product and constantly improving on it and perfecting the near-perfect.  The pricetag is what might cause most people to rather consider a different Logitech mouse and with fair reason.  The Superlight is not cheap, and with competitors like, the Razer Viper Ultimate sitting in similar price ranges with more goodies in the box is a true competitor’s choice.  If you prefer bigger mice that weigh nearly nothing is definitely the mouse you need, and yes, it WILL improve your aim, Promise!

Would I buy one, in a heartbeat!

special thanks to Logitech for the review hardware