2K Games have taken on the task of releasing their MAFIA series as a newly “boxed” MAFIA TRILOGY, although their order seems a bit off.  The Definitive Editions of MAFIA II and Mafia III dropped first, with the remaster of the original game dropping on the 27th of August this year.

MAFIA III originally released in October 2016 and was met with mixed feelings with it attaining only 6/10 on Steam.  With the announcement of the rerelease, we had hoped that the game would fare better in ratings and were lucky enough to get our hands on a copy to review (big up to you Prima Interactive).  So, let’s dig in and have a look at what we thought about the Definitive Edition of MAFIA III.

What’s it all about

You play as the hardened Vietnam Veteran, Lincoln Clay, who upon his return home in 1968 notices that not all is well in New Bordeaux, a fictional setting of New Orleans. 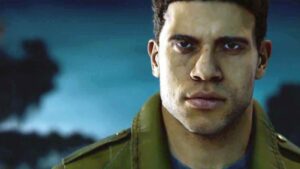 The game starts its introduction with a well-planned money heist with enough of a take that everyone involved could retire early and very happy.
However, as you guessed it – this is not the case!
Through massive betrayal and being forced to take a bit of a rest – as being shot in the face might require, Lincoln sets out on the world’s biggest revenge quest.  Our friendly neighbourhood protagonist recruits the help of a CIA agent who he worked closely with in Vietnam and the two start on a path to not just kill those responsible for the betrayal, but to completely dismantle their kingdom from underneath them one brick at a time, plunging their world into instability the likes of which they’ve never experienced from their lofty thrones. 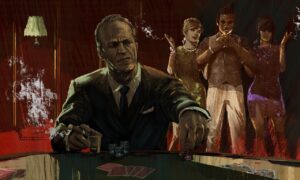 Unfortunately, this is another game that takes on the well-worn path of revenge but it does so in a unique way that almost brings a breath of fresh air into it, with snaps of real life (looking at least) clips of a court hearing to delve deeper into the slaughter that was Mr Clay’s takeover of New Bordeaux.

Before I give away the whole game (this isn’t a walkthrough), lets looks a little closer at what MAFIA III is.

From the start up

The Definitive Edition is not a remaster of the game, as I originally thought, but rather a repackage of the game into one collection in anticipation of the remaster of MAFIA I releasing later this year.
The repackage includes the base game of MAFIA III and all DLCs, as well as the Family Kick-Back pack which gives you a few exclusive cars and weapons to make use of in the game.
But is it really exclusive if everyone has it? Asking for a friend…
The total download size of the game on Xbox is around 56gb and can be yours for the low low price of R549 (at the time writing), or you can own the entire Mafia Trilogy for R999.
Not too shabby hey?

As said above, the game is set in a fictional version of New Orleans, known as New Bordeaux. 2K has done a great job at providing us with a huge playing space and each area having it’s own unique flare and style, as well as each of the mafia in those areas having a slight twist to them.You really have everything from man eating alligators and red-necks brewing moonshine in the Bayou to classy upmarket suburban areas with pompous denizens with flashy cars and beach front homes.

There is no fast travel system available in game and so the map must be manually traversed (we recommend finding a car).   This can sometimes be a tad tedious, but I learnt to love the drive with good music and classy drifts, enjoying the ever-changing city in each of the different areas.  The game is well rounded off with a difference in the areas during the day and at night, and a full weather cycle. 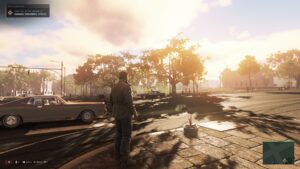 The controls of MAFIA III are fairly easy to master with it having a very similar vibe to other criminal type open world games.  You play in Third Person and control camera angles with the right stick and movement with the left.  This allows you to move in one direction while quickly having a look down an alley or through a window without being too obtuse.

Combat is challenging but manageable as standing in the open will result in you getting gunned down.  Moving from cover to cover is a must – obviously.  Firing from cover is quite easy as using the aim control will automatically cause Lincoln to stand up or peer out of cover while aiming down sight.  Aim assist can be adjusted from full snap on to nothing at all. 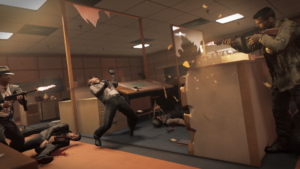 Gameplay is quite broad with various missions and collectables to go find spread out across New Bordeaux and there are a few races and just generally interesting places to go check out.
Building up your team and seeing how they start to benefit you, especially if you put a little time into building up their rackets, is a nice addition to this game as it does give the gamer that little bit of motivation to focus on something else other than just plodding along the main story line.

One aspect of gameplay that I personally found lacking was the actual variation in the main mission types.  After taking my second area and starting on the third, I already got that dreaded gamer’s Deja vu feeling of the same monotonous gameplay.  This feeling only heightened as I played on through the story and actually started to detract from a fairly captivating and well written story of revenge, albeit a bit of a cliché storyline.
The missions really did fall into a creative rut with every mission being attack this hot spot and this one, do a few cash steals or destroy stuff to a certain value, defeat the lieutenant who came in to check what’s up and then defeat the boss once you removed all his lieutenants from the area.
You’d think after 4 or 5 of these, the lieutenants and area bosses would wizen up and not walk into a well “defended area” that fell straight into the plan of our highly trained and incredibly motivated hardened killer.

Although I could’ve included this section under gameplay and controls, I feel it deserved a section of its own as the driving and cars in MAFIA III were really a redeeming factor for the game in my opinion.

With there being various types of cars and styles, I often found my car …ahem… shopping took a little longer as I’d find a model that I liked, drive 100 metres and see it in a better colour and slam on brakes to get that one rather.  This did lessen substantially after I unlocked a certain benefit that would bring some really good-looking cars right to me.  This did then result in my spending way too much time and hard-earned money in Big Rick’s Custom Auto getting my cars kitted just how I liked them and purring like a kitty.
And then returning later again after winning more stuff in the different races scattered across the map. The driving in this game was really enjoyable as you learnt to time the drift perfectly around an intersection and learnt when the drift needed just a little more gas, a brake or a hand brake to successfully complete depending on the car, road surface, speed and sharpness of the corner you were attacking.  The sense of absolute satisfaction I got from nailing the perfect drift on this game time after time really kept me coming back for more and I really didn’t mind the long trips between places once I had this down.  In fact, I’d sometimes plan the long route on purpose just to enjoy the car a little bit longer. 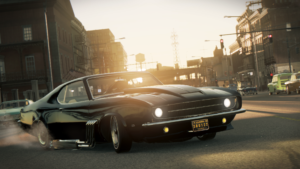 And the classic tunes coming through the radio, especially on WNBX, definitely helped set the mood and contributed to my sheer enjoyment of driving on this game.

Although the game did fall into a bit of a monotonous grind in the missions, I found there were still many aspects of the game that kept me coming back for more and actually made me think less of the same type of mission I was playing for the thirtieth time. So, although the monotonous factor is one big negative factor for me, there were lots of little positives that helped redeem the game and turn it into an overall enjoyable experience.  The main ones of these definitely being the tunes, cars and driving. 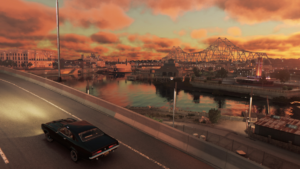 I also enjoyed the break away from the traditional Italian Mafia of the previous two games with the twist of Lincoln growing up as an African American on the streets of a very prejudiced era and carving his own type of justice to the Italian Mafia.

Just one final word of warning before giving my final rating of the game.
To accurately represent the times, MAFIA III does have a lot of racial and sexist slurs and stereotypes as was common in the 60’s.  2K does give a nice explanation as to why they went with this route in the opening of the game.  On top of this, profanities and nudity is about a dime a dozen and coupled with the slurs and violence, this really is a game that is made for the older crowd of gamer.

With all that being said and balanced in my brain.  Taking the good and the bad, as Will Thatcher’s dad taught me, I give this repackaged version of MAFIA III a solid 7 out of 10.

A MASSIVE SHOUT OUT TO THE LEGENDS AT

FOR GIVING US A CHANCE TO REVIEW THIS GAME!