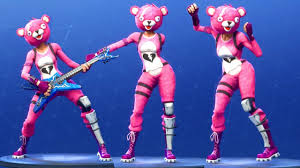 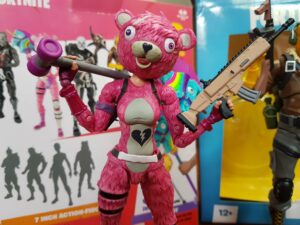 To many, she is the mascot of Fortnite. With her big purple and blue eyes, that scar above the one eye and her sadistic looking stare. She was one of the earliest and skins in the game as well as one of the most popular so it wasn’t surprising when she was the first figure revealed in McFarlane’s Fortnite line. Now full disclaimer, although there are new waves within the line and so much more to come, these things cost quite a bit so that is why I’m only reviewing her now for our readers. 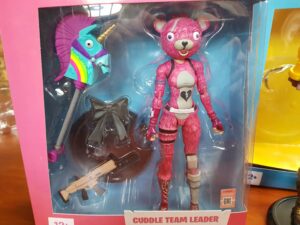 The packaging is simplistic but pops as it is covered in pink. The window display shows Cuddles, her gun and her pickaxe as well as her stand in clear view while there are product shots of the other figures in the line on the back of the box and some in-game shots of her on the side of the box. There isn’t too much else going on with the box though if you’d like to keep her in her packaging on your shelf it can work, though the box is a little big. 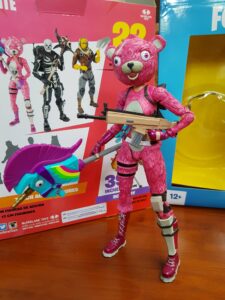 This figure pops out of any environment, be it a shelf or in the bushes while posing for a photo session. Her hot pink colour scheme is complemented with white sections on her torso and shin-guards. She stands out about as much as a bobble-head pink bear would. Her fur is nicely sculpted and there are some slight shades of pink in them. The scar above her right eye is nicely detailed which shows the white under layer or her mask. The white on her belt seems to clash with the white on her torso as it is really bright which is a minor thing to gripe about compared to how good this figure looks.

Her gloves are Magenta which just adds some spice to the whole figure. You’re getting a lot of pink with this figure’s colour but I appreciate the different shades of pink here and there just to add some variety.

She comes in at about 7 inches tall making her 17cm. 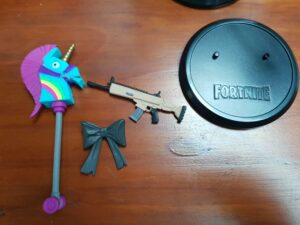 The base is the same that came with Skull Trooper and is a standard with these figures. It’s a simple round black disk with little stilts that fit into the peg holes in the soles of her feet. It has Fortnite engraved on it too. There’s not much to it and it really is just there to help her stand upright on the shelf.

The Assault Rifle takes the shape of a SCAR. It looks like it was pulled directly from the game. The paint is clean but simplistic. There’s no fancy little bits and pieces, just a gun coloured in cream paint with black edges. 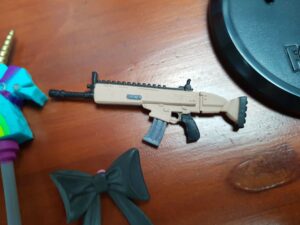 The Cuddle Bow Back Bling is a small solid black bow with a little peg to fit into her peg hole on her back. The peg is a little big though and it takes a lot of force to stick it into the hole (haha) but once it’s in there it’s a tight fit. It’s a nice touch although it isn’t all that much. 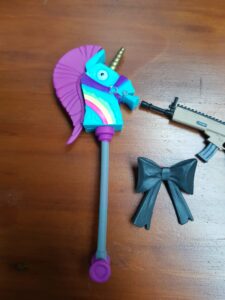 Then comes her Rainbow Smash Pickaxe which is just wild. It’s a lama with a horn like a unicorn which is one of the most iconic pickaxes from the game. The light blue fur on the unicorn is nicely sculpted and the purple main looks like a Mohawk more than anything else. Words can’t describe how crazy this thing looks. It is a bit top heavy though so making her hold it in some positions can be a little tricky. I have noticed some bend in the pickaxe’s pole though, being a softer plastic it came slightly warped out of the packaging and even after I used the hot water/hair dryer trick it still looks a little skew to me. But other than that it looks great.

Cuddle Team Leader is really flexible. Though on my figure at least there are some joints that are a little too loose, namely her left shoulder where the shoulder cap keeps shifting too far in but this feels like something that is only on the figure so more of a Quality Control issue, every figure line has those.

But other than that she comes with a good range of motion:

She has a joint in the head which can be pulled off in case you’d like to put another female head on her for an unmasked version. I’ve seen people slap a Harley Quinn head on there. She also comes with a ball joint at the base of the neck

There’s a barbell or dumbbell (I’m not sure which name is the correct one) joint in her shoulders with a shoulder cap to hide that a little as well as a hinge that goes from that into her shoulder to add rotation.

Ball joint in her mid torso and another one in her waist so she has a lot of movement going on in her torso.

She has hinges at her legs as well as a swivel/hinge at her ankles and toe articulation. 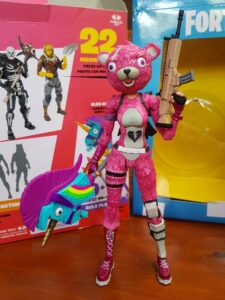 It’s one hell of a good figure. It pops where wherever she goes. She has a unique look and a great range of movement. She’s by far my favourite out of my Fortnite collection so far (I only have three).

She’s also a well sought after character amongst the Fortnite community.

She can fit in any situation when it comes to photos, she can fill in as filler or be that crazy serial killer stalking other characters in the bushes. After all, she is a homicidal lady dressed as a pink bear. Or she could just go out on a picnic with some characters. I’ve had photos of her forcing dishwashing liquid down other figures’ throats and eating Pringles with some other characters. For a photographer, there is a lot you can do with her. But for collectors who prefer just having a desk or shelf look pretty, she adds a whole lot of colour to any environment.

The only minor gripe is that pole on the pickaxe that just won’t straighten all the way.