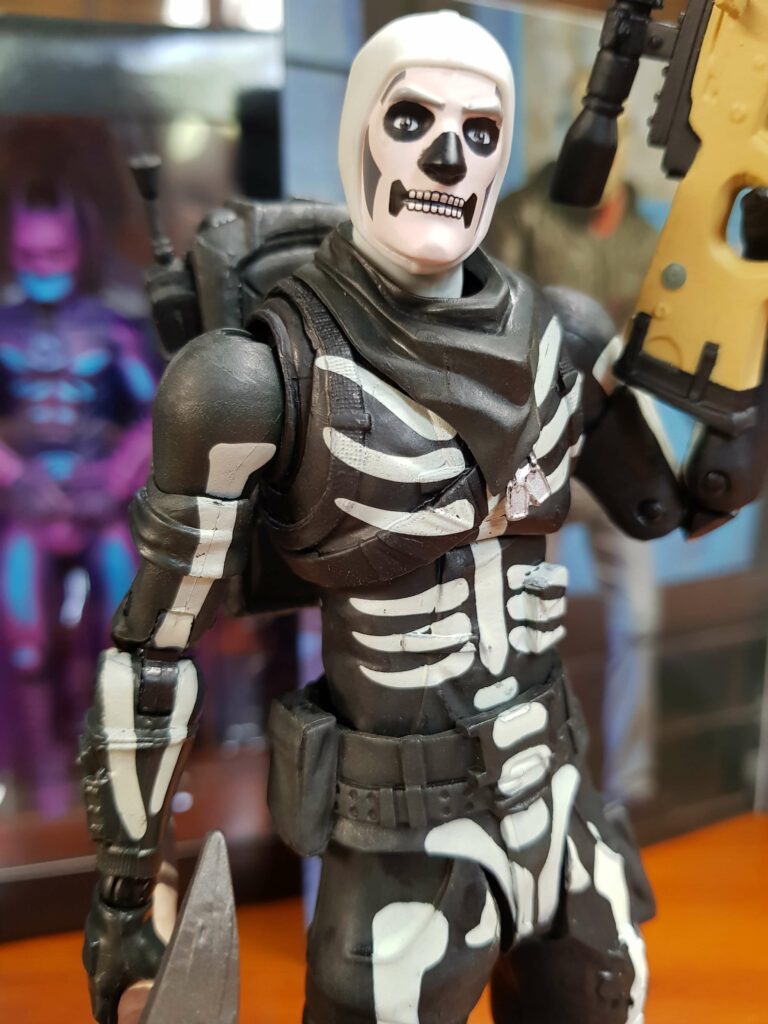 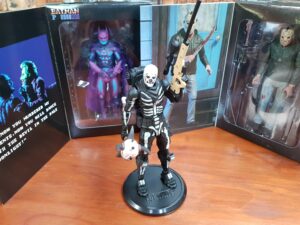 It’s no surprise that Fortnite has been given the action figure treatment. I’ve said from day one of Fortnite’s Battle Royale mode that these characters would make good figures. And so that day has come. It was a smart move to include Skull Trooper in the initial line up as he is by far one of the most sought after skins in the game, in fact, he was my first skin which I then used for a year straight (because I couldn’t afford anyone else and missed the first few battle passes). When I saw Skull Trooper being added to the lineup, I was quite excited but having never bought a McFarlane toy before so I had no idea what to expect. Apparently, McFarlane Toys isn’t known for much articulation so people that knew more than I did were sceptical…until they got their hands on one. 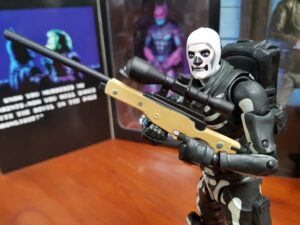 The box is quite big but its simplistic design and the broad window display is done nicely. Skull Trooper and all of his accessories are nicely displayed and the box is good enough to go on a shelf if someone wanted it to. It has Skull Trooper’s in-game portrait on the side and a preview of the other figures in the wave is found on the back. No background in the box other than a plain yellow backdrop. It would have been a cherry on top of the cake to have a printed lobby screen though. The box looks good and eye-catching enough but it’s what’s inside that matters. 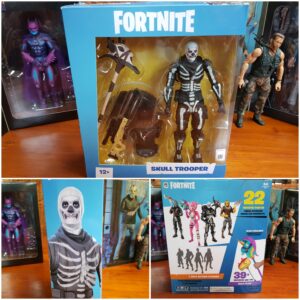 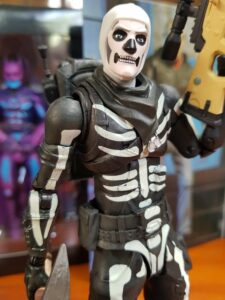 Skull Trooper looks amazing. Essentially he is a guy in tactical gear that drew a skeleton layout on himself which the figure captures perfectly. There’s patch work on his pants and his one shin guard is strapped to his leg with visible straps. His face captures that cartoony style that Fortnite is known for which some people might not like but that’s just the style of the game translating to figure. The figure might not stand out as much due to his dull colours but he does look menacing enough on the shelf which is what most people are after. 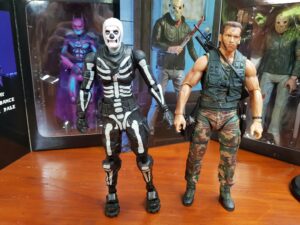 Skull Trooper stands at 7 inches tall (about 18cm) so he’s more in scale with NECA figures. 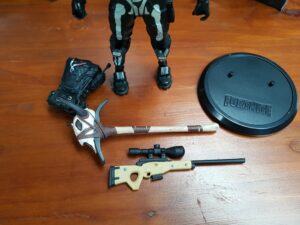 And his Death Valley Pickaxe.

The base is a nice addition. It’s a simple round black disk with little stilts that fit into the peg holes in the soles of his feet. It has Fortnite engraved on it too. There’s not much to it and it really is just there to help him stand up right on the shelf. 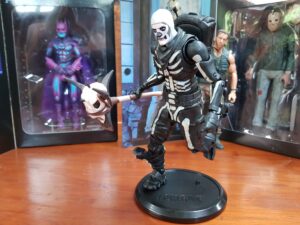 The Bolt Action Sniper Rifle is a splitting image of it’s game’s counterpart which leaves it looking very simplistic, unfortunately. It has no elaborate detail and is just a cream coloured gun with a bit of black here and there. I suppose it can’t be faulted too much due to this being the design in the game but with the addition of gun wraps added to the game at the end of last year, hopefully, McFarlane picks out some fan favourite wrap designs to apply to future weapons with their upcoming figures. 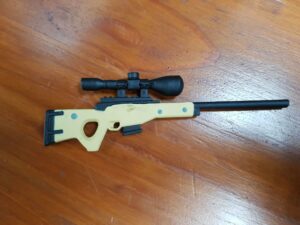 The backpack is just a black bag with some little detail here and there on the zipper and the bag itself. It’s keeping to the dark colours that Skull Trooper sports. It fits his design, which is a very simple design, to begin with. It just clips into his back with a peg hole. The backpacks can be worn by any figure though just like in the game so it’ll be interesting to mix and match them. 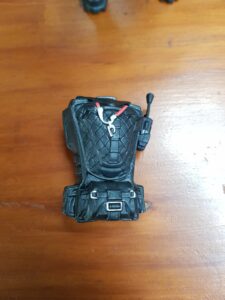 And then there’s the Death Valley Pickaxe which is by far the best thing to come with him. It’s a bull skull strapped and nailed to a pickaxe but it looks so good! The brown straps add some colour to not only the pickaxe but to Skull Trooper when he holds it. The Bull Skull is nicely sculpted and I like the wash they applied to its hollowed out eyes, it looks like its staring into your soul. It looks like something a psychotic serial killer would wield (and who are we to say Fortnite characters aren’t just that?) 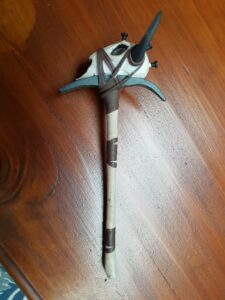 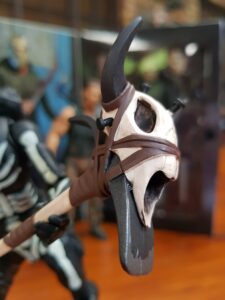 As with both the gun and the pickaxe, there’s a problem of Skull Trooper’s black paint rubbing off from his hands onto the lighter coloured accessories. It’s not that much of a big deal as it can be wiped off and it does give the gun and pickaxe a dirtier and more weathered look but I can see how some people would be annoyed at this. It’s just something one has to take into consideration when making him hold his weapons. 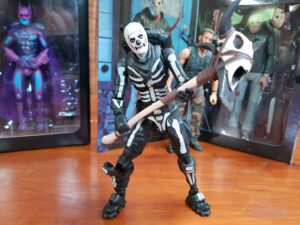 There is a ton of movement Skull Trooper can get into. His head can spin in a full 360-degree turn. It can look up quite well but the bandanna around his neck seems to block him from looking down, and no the bandanna is not removable. His arms can stretch out and can rotate with a swivel at the bicep. The shoulders can also move up and down with some fiddling. Double jointed elbows make for some really good pose ability as well as hands that can hinge up and down and swivel. He has a ball joint in the bit torso and a ball joint at the bottom by his waist so he can crunch, arch back and tilt. His hips are something I’ve never seen before. The joints are so well hidden one would think they’re not there but they are you just have to work them. There’s a swivel that allows them to point out and they can bend out although that can cause the white on his upper leg to rub off on the edge of his waist, again, some paint rubbing. He can kick forward decently and at least there’s some back motion. He has double knee joints which are just amazing as well as a hinge at the ankle which goes forward, back and sides to side and a toe joint. 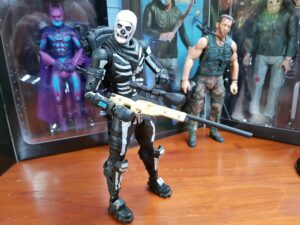 I’d say for fans of Fortnite this is a must buy. It looks good, it has good articulation and it has game accurate weapons. For people who don’t play the game but like collecting good figures, I’d recommend it too as Skull Trooper can easily be henchman fodder for your other figures. The only real gripe is the paint rubbing which is a minor thing. He can get into some really nice poses and he can look good on a shelf. Or he can be some good luck charm to sit next to you while you play Fortnite.

*I bought Skull Trooper from AWX, link below*