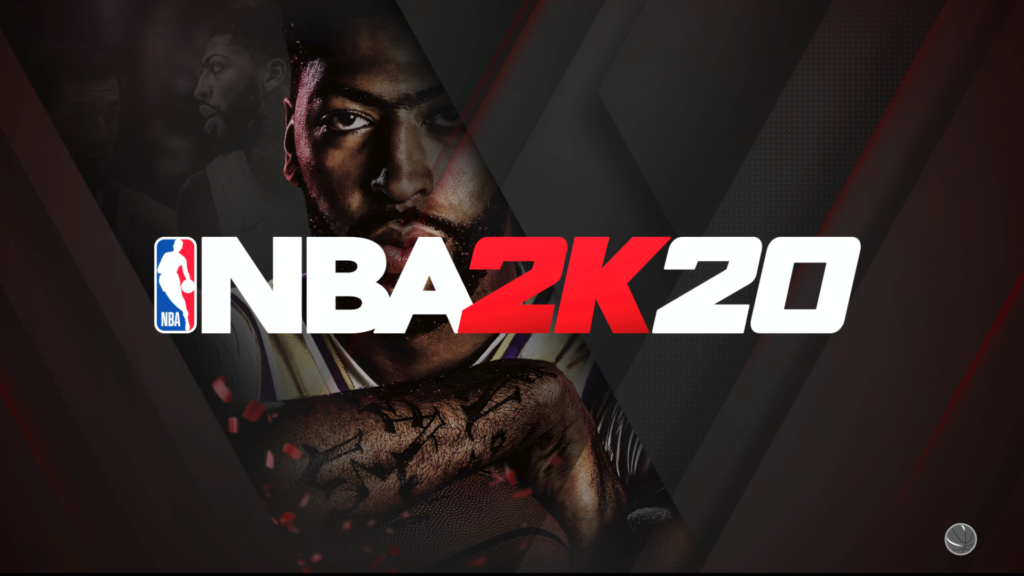 Knowing myself, I never thought I’d get excited over getting a new sports game, let alone a sport I knew next to nothing about a few months ago. But all that changed and I found myself sitting with the same anticipation for NBA 2K20 as 6 year old me did on Christmas morning while waiting for my parents to say it was time to open presents.

I received NBA 2K20 on Xbox One and tapped the code into my console as soon as I could, waiting patiently for my download to start and thinking I would be able to play that evening, I was greeted with shock at the almost 80gb download size of the game, which is normal for most games on the Xbox One. Knowing my internet was not the greatest, I put off all hopes of playing that weekend.

Once the download was finished, I dove head first into my first experience of NBA 2K and my ever growing fondness of the sport of Basketball. Opening the game revealed it’s dashboard with various options, these include;

Play Now – get straight into the action and play a quick game in any league, with any team that is available in game.

MyTEAM – a collectors area where you open card packs, and have the option of buying more, to build your very own team to play with and compete against other teams online. The card packs include players – both new and legacy, ball parks, uniforms, coaches, logos, balls and playbooks from teams in the NBA. You start this mode up by naming your own team and then opening up your starter packs. Daily logins give you a pack a day to add to your ever increasing collection. There are micro-transactions available for those who want to build quickly and don’t mind spending a little extra.

MyCAREER – following a story line, you start as a College superstar looking to make it big in the NBA. This mode includes the MyPLAYER section where you can choose how you look, including uploading images of your own face through the MyNBA2K20 mobile app.

MyLEAGUE – a sort of fantasy team area where you build your own roster and see how you match up to other players online. This mode includes a full WNBA season as the new and improved myGM mode where you see how you would cut it as a NBA team general manager, including keeping players, sponsors and fans happy. 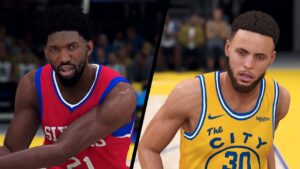 Again, with my limited experience in the realm of basketball games, my lack of skill was made obvious when I was dabbling in the Play Now area. I chose my favourite team – Golden State Warriors and had a normal 5v5 match against the Philadelphia 76ers. The learning curve of this game is huge and my fingers felt stupid on the controller as I button hacked trying to figure out what I was doing.
A quick look in the control settings showed me what I needed to know and I was able to play with at least answering all the shots that were taken against me.
The graphics are very impressive, with big basketball stars being very easy to spot and recognise in-game (if you know who you’re looking for) and the fluidity of gameplay is smooth and responsive.
2K has done a fantastic job in drawing the player into the game with realistic crowd cheering, good and fair game commentating and well place “highlight” shots of impressive gameplay moments, like dunks and 3-pointers.

Controls and Learning the Game

As I have said, the learning curve for me was huge but it wasn’t beyond reach.
All in an effort to make the game more realistic, one touch defending/shooting/marking are nonexistent and timing and positioning are absolutely crucial in every facet of the game.
One area that I, personally, usually struggle with in sports games is my defense, and NBA2K20 is no different. Having “mark-assist markers” on has helped me in getting into the correct position and marking the right man, because if you drop off him for even a second, a hoop is inevitable. As I got to know the controls and timing I tried to push it a bit more, with risky high press defensive tactics and ball poke steals while trying to avoid fouls. The game’s defense mechanics are highly rewarding when you time it right and I did score a few fast break layups from a well timed ball poke. Timing for a shot counter and using the analog sticks to mark the pass lanes add to the complexity and realness of the game.
Off ball marking is equally as tricky to master as you have to press the man and watch his movement off ball while trying to keep an eye on the location of the ball yourself. If you press him too hard he can shake you off and leave you trying to catch your balance again while he drives for the hoop. 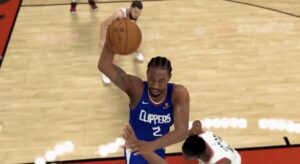 Attack all depends on your positioning and timing as well. Drive the ball up close to the hoop and go for a layup, standing in the zone will result in a 2-point jump shot and the further you are from the hoop you are, the trickier the shot (of course). If you try and shoot while being pressed – your shot will be blocked or missed, try to layup with a bigger defender standing over you – slapped down and left looking like a deer in the headlights with all pride thrown out the window.

In MyCAREER, you follow the journey of the Bay City Flames superstar who, as he’s about to turn pro, falls from grace after standing up for a team mate and has to push his way to the draft.

Before you can get underway in MyCAREER however, you have to make and name your own player, who will constantly be referred to as Che in the game.
This player can be made by using a preset appearance, adjusting settings in game, or by uploading your own face into the game.
I, of course, tried to upload my own portrait into the game because why not? This resulted in some serious frustration as I received multiple “failed to upload” messages on my app (roll all the you’re so ugly jokes you can think of). I eventually succeeded and uploaded my face into the game and what a shock! Maybe it was the lighting I was in while taking more selfies for the game than most teenagers on Instagram. My “face” came out looking like a 2-tone neanderthal and I elected to rather use a preset and fine tuned some aspects of it.
Appearance sorted, I moved onto the skills selection and, once again, my limited knowledge of Basketball was made painfully obvious. I chose play-maker Point Guard and basically guessed my way through the skills, physical profile and potential section of the game while promising myself that I will come back and do this all again when I know more of what I’m doing. 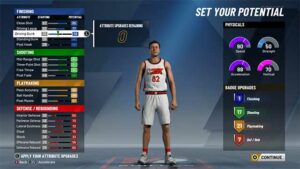 A little more guidance through this part of the game would’ve been much appreciated but the hints that 2K did leave did not tell enough for the new and inexperienced players to fully grasp what they were doing there.
Being pretty chuffed with the 6foot4 digital version of myself, I started the career mode and was in for a good time.

You pick up the story in a crucial semi-final match, where you are the captain and hero of your college. This match is impossible to lose as the score jumps miles ahead of your opponents while you are benched during parts of the match. At the end of the match a teammate gets injured which results in him losing his scholarship. You choose to do something about this and sit out of the final – which your team loses, and you fall from grace and try to earn a spot at the NBA Draft. You go through a process known as the NBA Combine, which allows scouts to properly evaluate and assess potential talent for the league. You are asked to do various drills, which help you learn the controls of the game, and then play in a few scrimmages to increase your chances of being noticed and drafted. 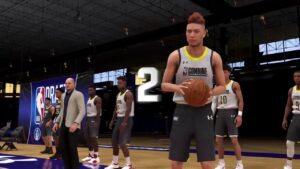 During this process, you are given choices to increase your rep or your skill. Choosing the one, will result in a decrease in the other and allows the game to decide your path forward as you tell it what kind a player you want to become – chasing the fame, or looking to be a NBA great.

I was able to work my way up from a “late 2nd round” to “solid 1st round” pick, even though I made some serious blunders during the Combine, including completely fluffing my vertical standing jump and some of my shooting. The pressure is high during this part and I definitely cracked under some of it.

Luckily – I got the invite for the Green Room and was drafted in the first round.

NBA 2K20 is a great game that really asks gamers to rise to the occasion in it’s technical gameplay and realistic feel.
The game has a lot to offer for those who are really looking for more. Loads of time can be spent in putting together your own team in my MyLEAGUE, or building dominating decks in MyTEAM and playing them in head to head matches against real players.

One thing that did take away from my own personal experience was the updates. Since release date on the 6th of September, there have been 2 updates – one of which was almost 40gb and took a few days to complete on my internet line. In other countries with their big internet, these updates are not an issue, but here in South Africa – it is definitely a big point to consider.

Would I recommend this game? Absolutely – if you are a sports game fan, or a basketball enthusiast then this game is right up your alley. If you aren’t and, like me, like a bit of a change from your conventional gaming sessions, this game really will keep you entertained for a good few hours at a time.

Special thanks to Prima Interactive for supplying us with a review copy.