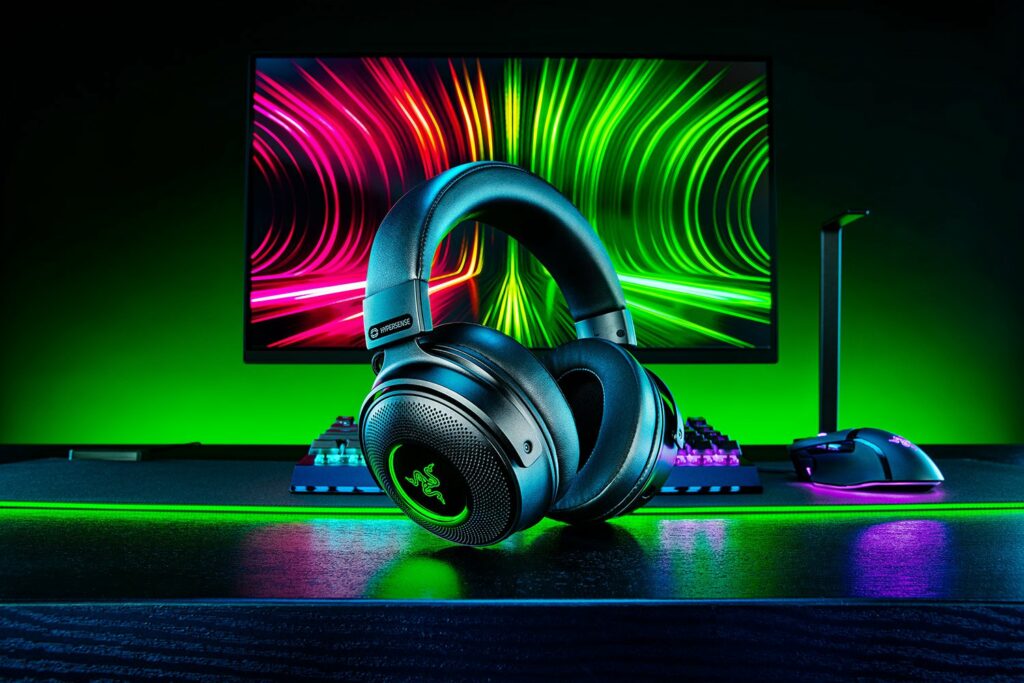 With so many options of headsets on the market, and so many companies branding sub-par technology as pro in an effort to get the buyer to look their way, what can be believed out there?

With a company like Razer, that’s been punching their way forward with a take-no-prisoner’s approach to all their gear, you can know that they don’t slap the pro tag lightly onto things.
The Kraken V3 Pro from Razer takes it’s name, Kraken, very seriously and offers huge boons to those lucky enough to don a pair, while uping the ante to the pro levels and doing it with such subtlety that you won’t hear the comment of “all the gear, no idea.”

We were given time with the Pro model this time around, so this review will be focused around that one but for more info on the range, follow this link:
https://www.razer.com/pc/gaming-headsets-and-audio/kraken-v3-family

If you’re one of those people who sees the pro tag slapped onto something and immediately write it off as a desperate sales manouveur. Don’t be that guy with this headset.

You may be asking yourself what gives you that extra edge when it comes to the Kraken V3 Pro headset from Razer, well, let’s take a look.

Like its counterparts, Razer opted for the more traditional design with the Kraken V3 Pro, as they have with all their headsets.  This traditional design consisted of a padded headband, cushioned over-ear cup and a detachable mic.

This design is made better using memory foam cushions in the ear cups that are made from a hybrid of fabric and leatherette to increase comfort, as well as durability. These cups are made to last, to feel good and help to isolate sounds within the headset, as well as reduce external sounds and assist in haptic transfer (more on this later).
The headband itself is steel reinforced which increases its resilience and durability, while remaining lightweight and flexible to ensure comfort, even in those extended gaming sessions. The cushion in the headband is soft and thick and helps to negate pressure and weight on the top of the head, preventing that ever-annoying band-sensitivity that some other headsets cause from extended use.
The overall design of the Kraken V3 Pro is focused on being equal parts robust and comfortable and Razer have managed to pull that off spectacularly, while still producing a good-looking headset.

The look of the Kraken V3 Pro is made even better through the addition of Razer’s very own Chroma RGB in the logo on each of the ear cups.  The options for colour and light sequence seem endless with this headset and I can guarantee that even the pickiest of RGB enthusiasts, or the most pedantic on set-up colour coordination (like me), will find exactly what they’re looking for in the wide range of options.
One very cool feature that Razer has with the RGB lighting is their Ambient Awareness setting which allows the Razer Synapse software to choose the lighting of your Razer products based on what you are playing.  As Razer puts it, Ambient Awareness will transform your gaming experience and allow for deeper immersion in your favourite games.

The sound on the Kraken V3 Pro is delivered through Razer’s patented Triforce Titanium 50mm drivers and is fully customizable within the Synapse software.  Razer also has some pretty incredible pre-sets that you can start with and adjust exactly where in your cup you are hearing things sounds.  These can also be very simply changed, as well as other sound levels to gaming, music, movies, and others using the Synapse software.

Communication is key in any gaming situation and the Kraken V3 Pro has been given the tool to make sure that yours is crisp and clear in-game, on-call, or anywhere else you need to talk with the Razer Hyperclear Supercardioid mic.
The Hyperclear Supercardioid mic is larger than the mics of the other headsets in the Kraken V3 range, sitting at 9,9mmmm. This unidirectional, mic has an even better sweet spot, cutting out more background noises from the sides and back of the mic, while enhancing the clarity and giving a truer natural representation of your voice, with clarity that cuts through even the most chaotic of sounds.  The mic is also detachable, so it can be easily stored somewhere safe when not in use.

The Kraken V3 Pro, being the top of its class, also has Razer’s very own patented Hypersense feature.
Hypersense is Razer’s way of providing haptic feedback to the user to allow for the next level of gaming immersion. Haptic feedback is the inclusion of the touch sense, usually through vibration in gaming, to allow for quicker decision making and information relay in intense situations.
The Kraken V3 Pro allows for quick changing between three levels of haptic feedback, from subtle and barely there to basically vibrating your skull – each to its own and each has its place.  This can be adjusted through the Synapse software or by clicking the Hypersense button on the bottom of the right ear cup.

The Razer Kraken V3 Pro is wireless and boasts up to 44 hours of usage time IF the haptics and RGB are turned off. That time is drastically reduced to 11 hours if you use it with all the extra goodies. This should still be more than enough time for any healthy gaming sessions, and the headset goes from empty to fully charged in a couple of hours with its braided USB-C cable. A little charge management and you’ll be good to go for all your sessions.

The Kraken V3 Pro allows connectivity through its 2.4GHz dongle, through a USB-C cable, or a 3.5mm audio jack.
With the addition of the audio jack, the Pro version of the Kraken V3 range is connectable to PC, Switch, PlayStation, and Xbox – Xbox being the big difference from the headsets below it in the range, and a massive selling point for the Pro in my opinion.

In quick summary, the primary differences between the Kraken V3 Hypersense, and Pro models are as follows:
Wireless connectivity of the Pro, vs wired connectivity of the Hypersense.
Supercardioid mic of the Pro, vs the Cardioid mic of the Hypersense.
Xbox and Mobile support of the Pro through 3.5mm audio jack.
Beyond this, there really isn’t much more between the two headsets and it will come down to personal preference and budget as the deciding factors.

Having recently experienced the Kraken V3 Hypersense headset, I was eager to get my hands on the Pro to see why Razer would deem this version better than the incredible Hypersense model, or if it was just because of the wired vs wireless difference. Especially since the Pro weighs in at around R1000 more than the Hypersense model – which, for what it offers as a wireless headset, is still not a bad price.

On the first try, the differences between these two headsets are subtle, and barely noticeable – other than being able to get up and walk all over the house with the Pro model. As mentioned before, it became clear that the differences that earned this model the “Pro” nametag were the wireless connectivity, clearer mic, and Xbox and mobile support.
Everything else about these two headsets is identical. But I wasn’t disappointed at all!

Having recently become somewhat of a wireless snob myself (I’m sorry – it was bound to happen eventually), I was pleased by the fit, weight, and freedom that the Kraken V3 Pro gave me. No more having to tuck cables under keyboards or try to move them away from under my arms. This thing was great.
And it had the same great audio, clear mic, comfort, and functions that I had loved so much on the Hypersense model, so the Pro was immediately a big hit in my books.

With the Pro model being able to connect to Xbox, I logged many hours on Xbox with the Pro slaying creatures in Elden Ring, sneaking around in Assassin’s Creed: Valhalla, and quick flicking noobs in Call of Duty: Vanguard. And my experience was by no means dulled by the 3.5mm audio jack. The Kraken V3 Pro still outperformed all of my other Xbox headsets which, admittedly, are a little older now since Xbox has become a secondary device for me.
I did spend many more glorious hours with the Kraken V3 Pro hugging my ears on my PC (even now, as I type this review) and helping me get the advantage on my opponents with its crispy audio and its haptic feedback, which I’ve finally gotten used to.

On the Hypersense haptic feedback. While it is still isn’t my favorite sensation by a long shot, I have been able to use it to “sense” my opponent’s approach rather than just hear it, and this does give any player a huge boost over others as your touch sense joins the game and allows your hearing sense to do other jobs more attentively. I wouldn’t go as far as to say my K/D shot up and I’m not ranked top 10 in the world (yet) but I did feel a decrease in my response times and being able to hone in on opponents.

With the Kraken V3 Pro being so similar to the Hypersense model from Razer, you’d expect a similar rating. And you wouldn’t be far off with that – remembering, of course, the Hypersense received a 4.5 out of 5-star rating from us.

With the improvements that the Pro has, my personal experience of it, and taking the slightly higher price (ok, slightly more than slightly) into account, we award the Razer Kraken V3 Pro headset the following scores.

With an overall EAX rating of 5!

A big thank you to Apex Interactive for allowing us the chance to review this incredible product.