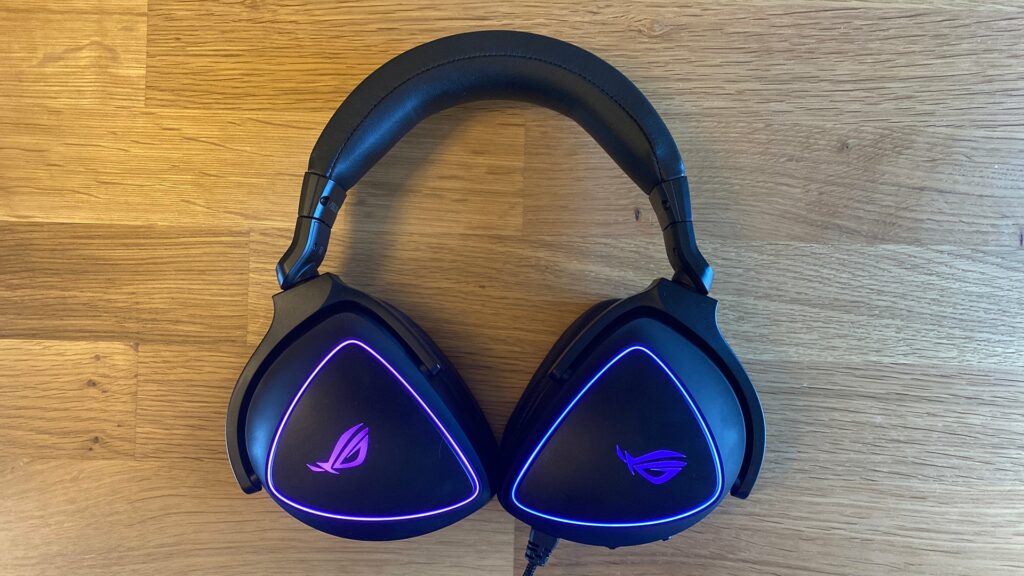 The ASUS ROG Delta S might look much like its 2019 brother, the ROG Delta, but ASUS has taken a really good headset and pinpointed some areas that could be improved, made the improvements, and gave us the ASUS ROG Delta S. If you are in the market for a versatile headset that can deliver high-quality audio across multiple platforms, then make sure to keep reading.

The design of the ASUS ROG Delta S is rather different from nearly all the headsets that I have reviewed before. Unlike the majority of headsets, that prefer to go for around earcup design, ASUS has gone for a triangular design that looks strange but fits rather comfortably. From the moment I pulled the ASUS ROG Delta S from its box, I was met with plenty of high-quality materials, albeit plastic, it felt strong and solid.

The headband has thick memory foam that allows the headset to rest comfortably on your head without and sense of weight. It is covered with nice-to-touch leatherette with the mandatory Republic of Gamers embossed on the top. Another noticeable aspect of the ASUS ROG Delta S is the fact that there are no visible cables anywhere on the headset, this gives it an extremely clean look.

Moving to the earcups, the ASUS ROG Delta S comes standard with leatherette earcups that are thick, wide, and rather soft, something that I thought might be a problem but they are actually some of the best I have experienced. If the leatherette does not work for you ASUS also supplies a second set. These are fabric mesh for those who prefer a more breathable feel at the expense of sound isolation. Moving to the rear of the earcups, this is where the RGB starts. Both earcups feature a ring, or triangular, RGB strip as well as the obligatory ROG logo that also lights up with RGB. These can be turned off or customized in the Armoury Crate software.

The left ear is where everything happens. The braided cable is attached to the headset on the left ear, as well as all the controls are located there. There is a scroll wheel to control the volume, and the wheel can be pressed in to mute the microphone. Above that, there is a 3-stage slider switch that can turn the RGB off, on, or make it follow the audio that is playing.

Something can really be said about the way the ASUS ROG Delta S fits on your head. The whole earcup can swing enough to cater to nearly any shape, let alone a head. With significant tilt and angle on the actual earcup as well, the ASUS ROG Delta S will fit any head, no questions asked. For those who prefer a slightly tighter fit, the ASUS ROG Delta S does not have the strongest clamp compared to headsets like the Logitech G Pro X.

Personally, I do not use the virtual surround features in any headsets as they tend to sound echo-ey and become more disorientating in first-person shooter games. But nonetheless, I turned it on, via the armoury crate software and headed into Horizon Zero Dawn, which I am playing for the very first time ( don’t judge me). The game is simply breathtaking, not only because of the wonderful views and graphics but the openness and vastness of the environment is amplified by the wonderful surround effects that the ASUS ROG Delta S can produce. crisp crunches as Aloy walks across stones or snow, and the distant echos of massive Tallneck’s footfalls just pull you into the world.

Turning off the surround sound and jumping into some Warzone and Fortnite just solidifies how impressive the ASUS ROG Delta S audio quality and performance truly is. Gunshots are booming and crisp, with silenced sniper shots sounding short and sharp while the barking of assault rifles gives you goosebumps until they are directed at you!

The ASUS ROG Delta S features a long and flexible triangular-ish microphone that is omnidirectional as well as noise-canceling, thanks to the ASUS software. My current headset also features a really good microphone and great noise-canceling abilities so the test was to switch between headsets while at a party of friends playing games and see if they would notice.

The ASUS ROG Delta S did really well and my friends hardly noticed, the only time someone did say that my voice did seem different was when the ASUS ROG Delta S was working really hard at cutting out the loud and heavy background noise. My voice sounded slightly more hollow than usual but the background noise was significant and in a normal environment it would cope easily.

The flexible arm of the microphone is nicely tensioned and does not move with sudden head movement and thanks to a nifty red light you will know when you are muted. The only shortcoming with the microphone and the mute rocker sitting on the earcup is that you will most likely capture some noise from you fumbling with the rocker before you actually hit the mute.

ASUS uses their own software called Armoury crate as mentioned before. Armoury Crate controls nearly every aspect of most ASUS products. When it comes to the ASUS ROG Delta S, you are able to turn on virtual surround sound, change your equalizer settings, or select from the presets, there are sound optimization settings that give you a good starting equalizer for gaming, communication, FPS, movies, and music. The last audio option is the MQA status.

For the microphone, there are fewer options, but they are tweaking the noise gate and the noise cancellation on or off.

If you want to adjust the RGB that feature on the ASUS ROG Delta S then you will also need to adjust or customize these in the Armoury Crate.

The ASUS ROG Delta S really is a phenomenal headset from the USB-C cable all the way to the microphone. The audio quality is some of the best I have experienced in a gaming headset thanks to the quad DACs. You will probably need to venture outside the realm of gaming headsets to truly find something that will comfortably beat the ASUS ROG Delta S in terms of audio fidelity. The only slight gripe I have with the build is the lack of clamping force which does affect the sound isolation.

But that is only a slight bump in the road of the ASUS ROG Delta S. It is extremely versatile and I cannot think of many reasons why this should not be on your radar if you are in the market for a new do-it-all headset. They are also pricier than what some would want to spend, but if you want high-end audio, you need to fork out some cash, so the price tag is on-par for its performance.

special thanks to ASUS South Africa for the review items