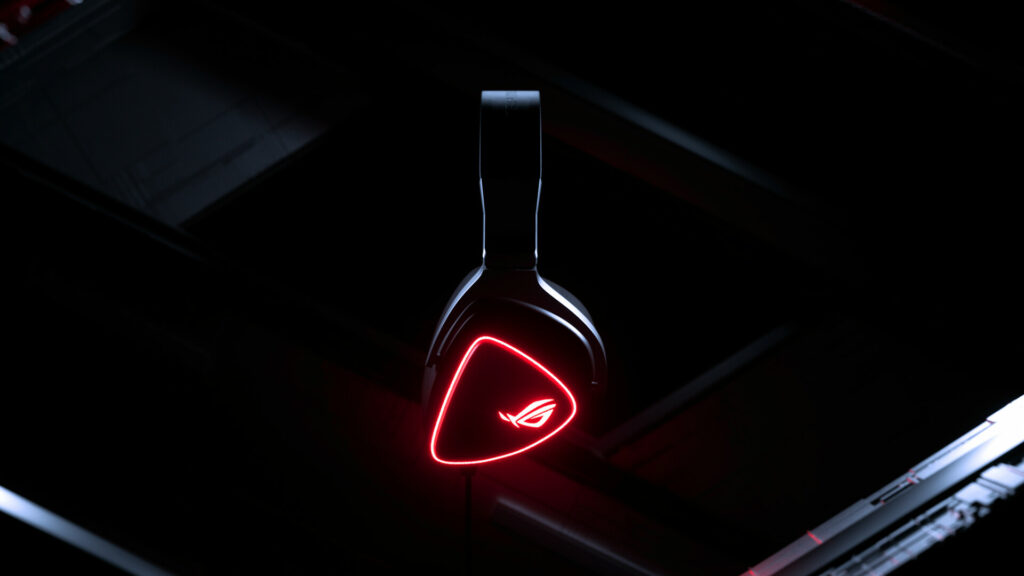 The ASUS ROG Delta is rather distinct looking thanks to its triangular earcup design. Personally, I prefer the more traditional oval or circular earcups but each to their own. Comfort is obviously one of the first aspects of a headset. The very first thing that I noticed with the ASUS ROG Delta is the clamping force, or actually the lack of it. This might just be personal preference but it clamps sufficiently but some more force would be nice. The earcups which are clad in leatherette feel plush and have sufficient thickness. The headband also features thick and plush leatherette-covered foam which makes the ASUS ROG Delta feel extremely light and comfortable on your head, even after extended sessions. The hinges that connect the earcups to the headband give enough maneuverability to fit nearly any head so finding a good fit won’t be difficult. The onboard features are limited which is a blessing as all the controls are on the earcups. This means you will need to use the roller located on the earcup to adjust volume up and down as well as press the roller to mute.

The microphone, which is detachable, is a movable boom mic that features a red LED that will shine when the microphone is muted.

The ASUS ROG Delta connects via USB-C which is fast becoming a popular method of connection, but thankfully, ASUS has included an adapter to convert USB-C to USB2.0 which also gives a bit of extra length to the cable.

The outside of the ASUS ROG Delta earcups features some RGB goodness in the form of some RGB strips and a ROG logo on each earcup. All of this, as well as the surround sound, RGB, and equalizers, can all be controlled via the Armoury crate software, although the ASUS ROG Delta is well-tuned straight out of the box.

To really test the ASUS ROG Delta I decided to jump into a few games and see how it held up. First up was R6 Siege. With a game like this, even the smallest of audio queues can make the difference and the ASUS ROG Delta did not disappoint, not only could I hear footsteps more clearly, I could make a greater distinction on whether the movement is on the same floor or a floor above me.

To really get the feel of chaos, I jumped into some Tiny Tina’s Wonderland. The chaotic action is always great to see whether or not the headset is able to keep its lows, mids, and highs from washing into each other and it is safe to say the ASUS ROG Delta, once again came out on top.

The ASUS ROG Delta, which has a big brother, the ASUS ROG Delta S, while being slightly cheaper than its brother is still an extremely capable all-around headset. If you have a mobile device that can accept USB-C then this headset will work on nearly every platform imaginable thanks to its flexible connection options. The audio is great and the build quality is what you would expect from ASUS and their flagship ROG brand. But what is not expected is its rather small price tag considering that it is ROG product. If you are a ROG fan and are looking for a versatile budget-friendly headset, you would do well to consider the ASUS ROG Delta.

Do you want to buy a pair? Follow this link!

special thanks to ASUS South Africa for the review item