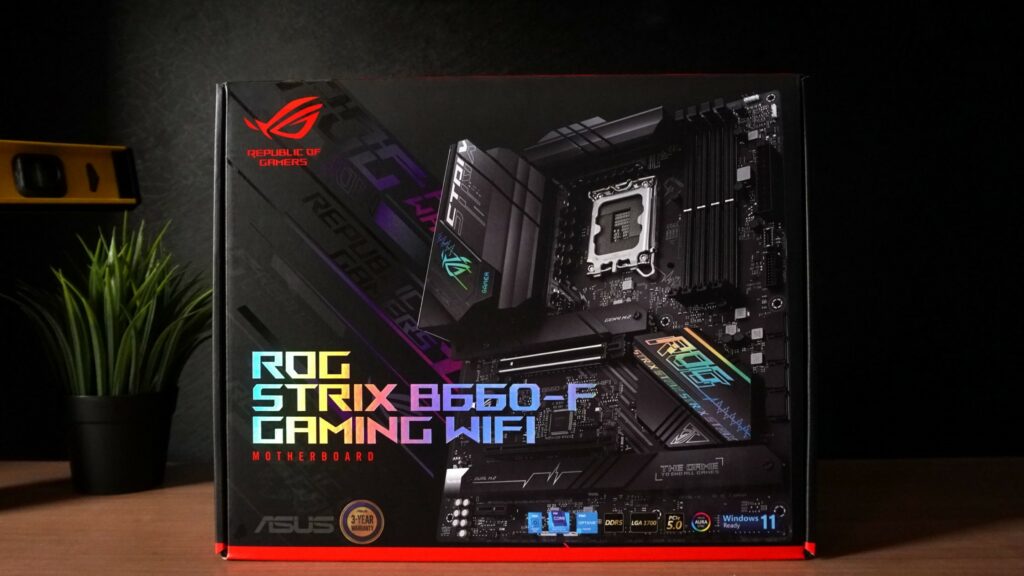 Alder lake has really shaken up the game, Intel has brought a new concept with their latest CPUs that will surely force AMD to rethink their ways and either decide to do the same or to try something new. This is great for the INTEL vs AMD debate but even better for the rapid change and improvement of technology. ASUS has sent us their ASUS ROG Strix B660-F motherboard to look at. It certainly is a B660 board in the typical ROG attire. Doing the primary job dressed in premium attire.

In true ROG fashion, even the packaging is of a premium nature. The ASUS ROG Strix B660-F comes in a box that is coloured in the usual black and red colours that are synonymous with the ASUS ROG range.

The ASUS ROG Strix B660-F is bundled with much of the usual things such as the WiFi antenna, SATA cables, M.2 accessories a Thank You card, some software, cable ties, stickers, and a manual and a ROG keychain.

Many people will ask the most obvious question, what is the difference between a Z690 and a B660 board. On the surface, they both look the same, but the difference comes in with the components that are being used. The B660 range of boards is earmarked for a more mid-tier consumer, by using slightly lesser grade components the manufacturers are able to create a board that can perform well enough to suit a vast majority of users’ needs while making it more affordable.

The B660 still has all the nice trimmings. The matte black finish, all the new-age designed artwork and the aluminium finish on the I/O shield and the expected RGB all make this really fit the ROG styling.

Top-side of the board you will find your 8+4pin power connectors with a 16+1 power stage for power delivery. The VRMs have hefty enough cooling blocks while not being too obstructive or obtrusive. The large sinks might look like overkill for the new Adler lake CPUs but once you get them working on all cores, they do generate some heat!

The ASUS ROG Strix B660-F can support four sticks of DDR5 RAM with a max capacity of 128Gb although that would be a total waste of money as there is not much reason to go over 32Gb of RAM if you are intending to do normal day-to-day jobs or even gaming. The speed of the RAM is capped at (only) 6000Mhz which is slightly down from the Z690 variants.

The ASUS ROG Strix B660-F comes with two x16 slots with the reinforced top slot running at PCIe 5.0 and the second slot at PCIe 3.0. In between these two slots, there are two PCIe x1 slots for accessory cards, it is important to note that these share bandwidth with the PCIe 3.0 slot. There are a total of three M.2 slots available and each has its own heatsink/latch. Two of the three M.2 run at PCIe4.0 x 4 while the last slot runs at PCIe3.0 x4. For those who still use SATA, there are only three SATA ports, which is weird as most boards come with at least six as a standard.

The I/O and headers

The ASUS ROG Strix B660-F has a preinstalled I/O shield that makes building the motherboard into a case, much easier. There are USB 3.2 Gen2x2 Type-C port, a USB 3.2 Gen2 Type-A, one USB 3.2 Gen1 Type-C, four USB 3.2 Gen1 Type-A, DisplayPort and HDMI, a WiFi extension module, a 2.5G Ethernet powered by Intel I225-V, a BIOS Flashback and Clear CMOS buttons, and five audio jacks.

The ASUS ROG Strix B660-F has plenty of fan headers, seven to be exact. These 4pin headers are spread conveniently around the board. Two can be located at the top, two in the middle and three at the bottom, making sure any fan placement is accounted for. USB expansion slots are also in abundance, there are two USB 3.2 Gen 2 and thunderbolt connectors. At the base, there is a USB 3.2 Gen 1 header that expands to two USB 3.2 Gen 1 ports and two more USB 2.0 connectors for a total of four USB 2.0 ports. No ROG board would be complete without the mandatory RGB headers. Two addressable Gen 2 headers at the top which are in white, and then the AURA RGB header at the bottom. The other, less exciting, headers can be found at the bottom of the board, these include Thermal sensor, S/PDIF out, Front Panel IO, SPI TPM and system panel headers.

My personal thought on whether to buy a B660 or Z690 has always been to choose the latter. Get the Z690 and then you know your board can do everything you need. But after this review, the ASUS ROG Strix B660-F has made it clear that for the vast majority of users, even those who will do the most basic of overclocking, the B660 range is more than adequate.

The ASUS ROG Strix B660-F is very capable, it has solid features that include enough storage expandability, although it lacks SATA ports. It has PCIe 5.0 support and has large enough VRM cooling, and, of course, it features the iconic ROG design and RGB. It is slightly more expensive and does step into some Z690 price range. The B660 has more limited overclocking support because it leaves out clock multipliers, but the same result can be achieved by changing clock speeds, albeit a bit more daunting. RAM speeds are also capped at 6000Mhz.

Although the ASUS ROG Strix B660-F Gaming Wifi is priced higher than some other Z690 it still has a marketplace. Sitting at the upper levels of the mid-level boards it combines cost-effective components and provides nice features and aesthetics that some more bare-boned Z690 boards will leave off.

special thanks to ASUS South Africa for the reviewed hardware