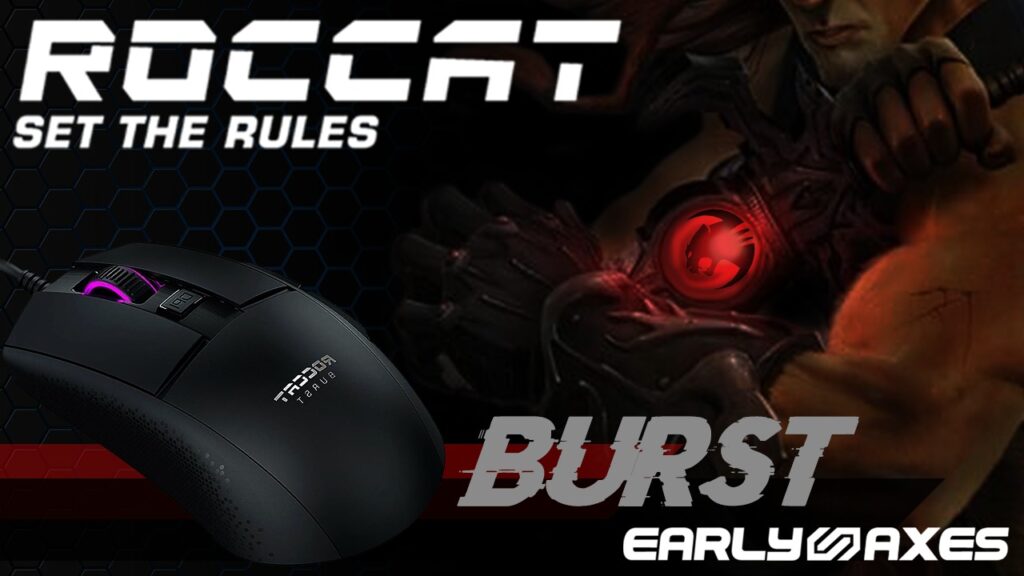 Lightweight, gaming mouse, optical switches, and budget-friendly are not normally words that can be found when speaking about one item.  The Roccat Burst Core is here to prove that those words do all belong together! Roccat has introduced its Burst range that features the Core, which we are reviewing today, as well as the Pro version, which features some more pretty-looking RGB as well as some honey-comb weight reduction for an even lighter and competitive product.  Roccat shows why the argument of paying more to get more is not always correct! 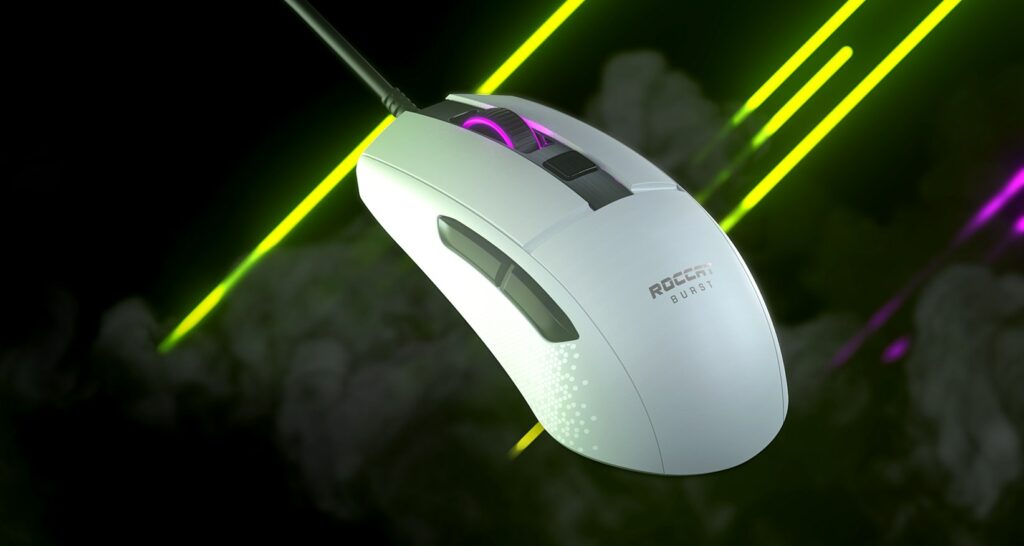 The Roccat Burst Core does carry the general design that its more flashy Pro brother has but just turns down the RGB and flashy appeal to provide an even more appealing price tag.  Firstly, as mentioned the Burst has toned down the RGB and has opted to only have RGB on the scroll wheel.  Personally, I like this as I don’t like the minimal RGB look.  Unlike the Pro version that has the honeycomb design that allows for more weight to be cut as well as letting the RGB shine through the palm rest area.  The other thing that Roccat has done to cut the price further, is to replace the new PixArt PMW3389 sensor with an older, but extremely reliable PMW3331 sensor.  Lastly, the braided cable on the Pro has been dropped and a plain rubber cable has been installed.

The Roccat Burst Core does however keep the shape and construction as well as the Titan optical switches on the main buttons.  Roccat claims that they will be good for 100 million clicks, yes you read that right!  The design and shape of the Burst Core is extremely reserved and will suit every style of grip that you can think of.  Although it can look like an ambidextrous mouse, the side buttons are only on one side meaning, by definition it would be classed as a right-handed mouse.  The outside of the Roccat Burst Core is covered in tiny glossy hexagons to help grip and hopefully reduce slip.  Due to the shape, the added grip is a good addition. 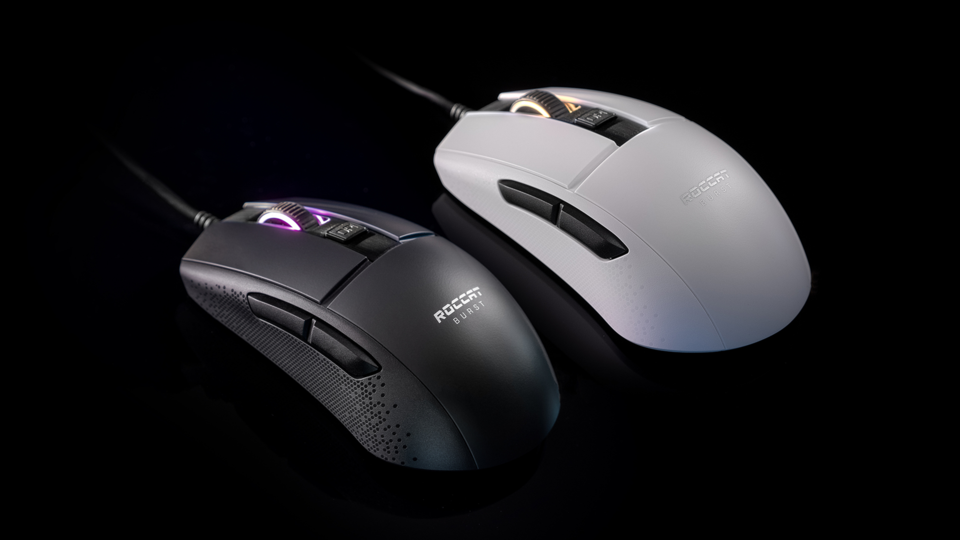 The main buttons are both slightly wider and concave which allows your fingers to move around on them without causing a miss-click and the concave shape lets your fingers naturally return to the center of the button.  The main buttons, featuring those durable Titan switches do feel slightly different from other brands and it might take a few clicks to get used to.  It does feel like the travel on them are slightly longer than the few other optical mice we have tried but the click is a lot more assertive and confident which is very nice.  The inside buttons do a great job of being big enough that you cannot miss them while protruding just enough to be found easily while not sticking out too much to be accidentally pressed, well done Roccat!  I did have a few occasions where I did not press them down hard enough to make them actuate but that is me being used to switching between so many mice in short periods of time.  They do have a fair amount of travel which allows for multiple clicks in a short time.

The scroll wheel is the owner of the only RGB on this Roccat Burst Core and it protrudes enough while having a slight but satisfying tactile feedback on its scroll steps.  But the scroll click feels wonderful, I would never have thought that a scroll click could be as satisfying as this one.  There is a large DPI button on the top of the mouse that does exactly what you would expect, change between the preset DPI settings that you can set using the Roccat Swarm software.

The bottom of the Roccat Burst Core features two large skates situated at the front and rear of the mouse.  They are dyed black PTFE with rounded edges.  These skates do a great job of allowing the Roccat Burst Core to move and slide smoothly on a variety of surfaces.  We tested it on two gaming mousepads as well as on a plain smooth wooden surface and it handled all of these surfaces wonderfully. 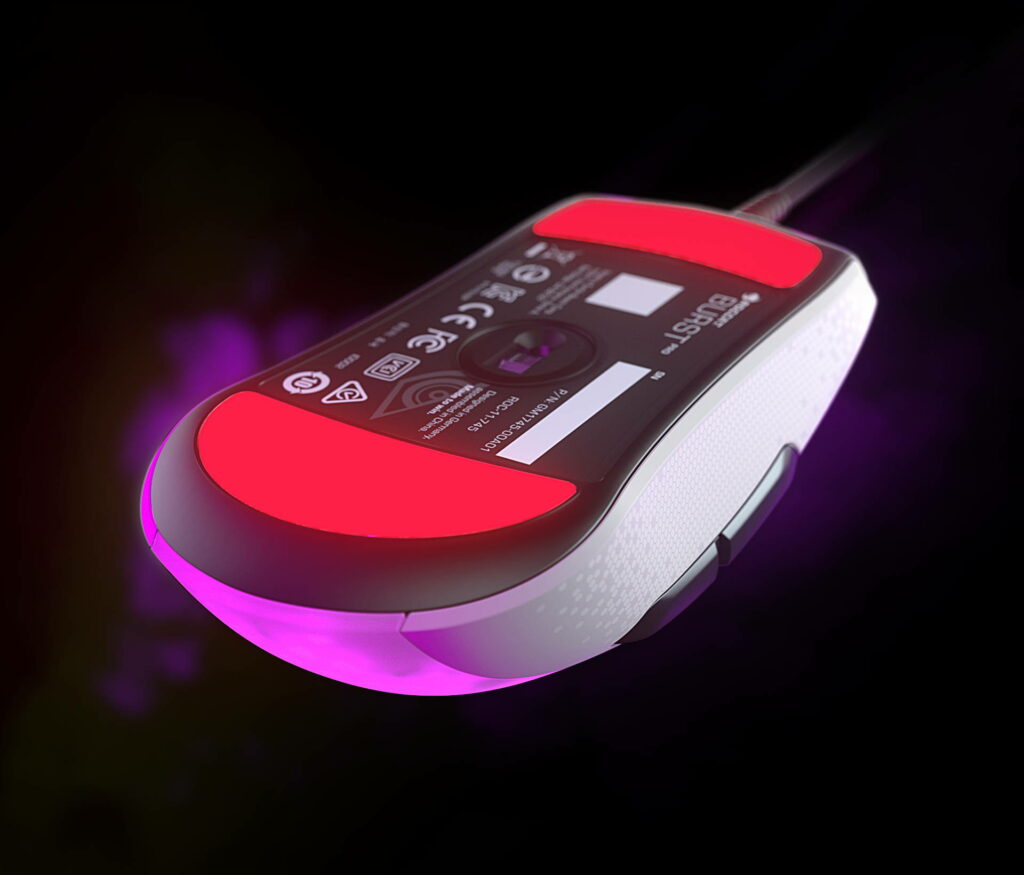 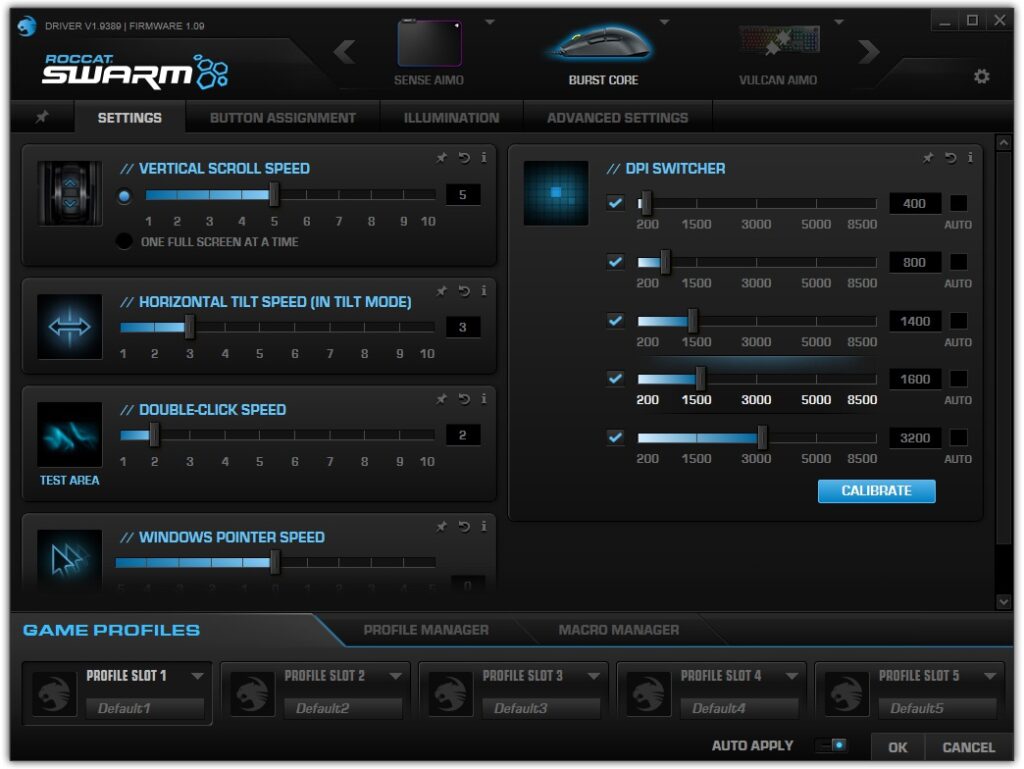 Our previous time spent with Roccat products was overshadowed by the Swarm software.  And not in a good way.  Compared to software by some of the other brands, the Swarm software is just not quite there.  It gives you all of the features and that is great.  But it just feels cumbersome and we experienced many bugs where changes would not activate.  What it does have going for it is the fact that is more self-explanatory than many of the other software.  There are five DPI setting options, DPI can be set from 200 all the way to 8500.  These five settings can be stored on the mouse’s onboard memory, this way you don’t need the Swarm software installed to take advantage of the varied DPI settings.  An interesting feature that the Swarm software has is the sound feedback when changing DPI, it is a little distracting when changing DPI mid gunfight and you have a male voice telling you you are now on “1000 DPI”.

Taking the Roccat Burst Core into some competitive play during COD Cold War free weekend, had a bit of an adjusting period with the left and right buttons needing some getting used to but once that was dialed in the Roccat Burst Core handled itself extremely well and it managed to perform as expected.  With the Titan switches, there is some travel time that once you are used to it, allows for button spamming which is wonderful if you are that way inclined.

At the price point, there are not many mice that can compete with the Roccat Burst Core and it is extremely competitive in the lightweight wired gaming mouse section!