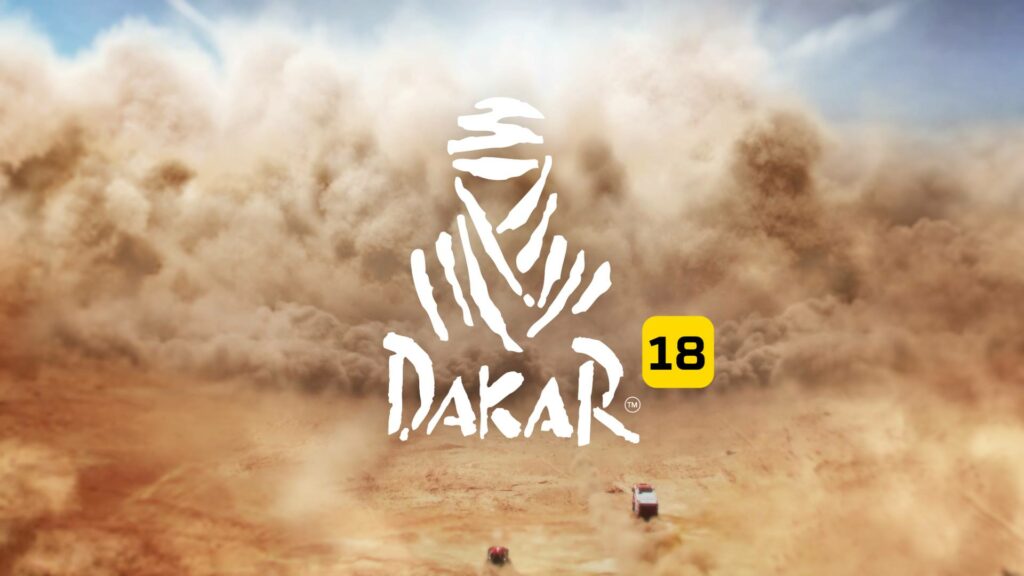 Majority of games can be generally classified into two sections: Casual and Simulation.  Gamers want the games they play to be true to life, although life is not always as exciting or easily put into a game, therefor developers tend to take some artistic license and change and brighten up the game to make it more exciting for the gamers.  No genre is more split into two categories than the racing-genre.  Gaming studios make a decision early on in development whether they want to make a title focused on being fun, casual and easy to play.  Or to go the realism route, and stay as true to realism which, most of the time, makes the game a lot tougher to get used to.

Big Moon Studios clearly decided on the latter and went with the truest Dakar representation that there has been!  Dakar , which has since been moved from the the original route taking drivers from France all the way down to Dakar in Senegal.  Due to many attacks on crews and drivers and general unrest in the countries, it was decided to move the race to South America.  Dakar 18 takes you and your vehicle of choice all the way to the dunes of Peru where the race starts. 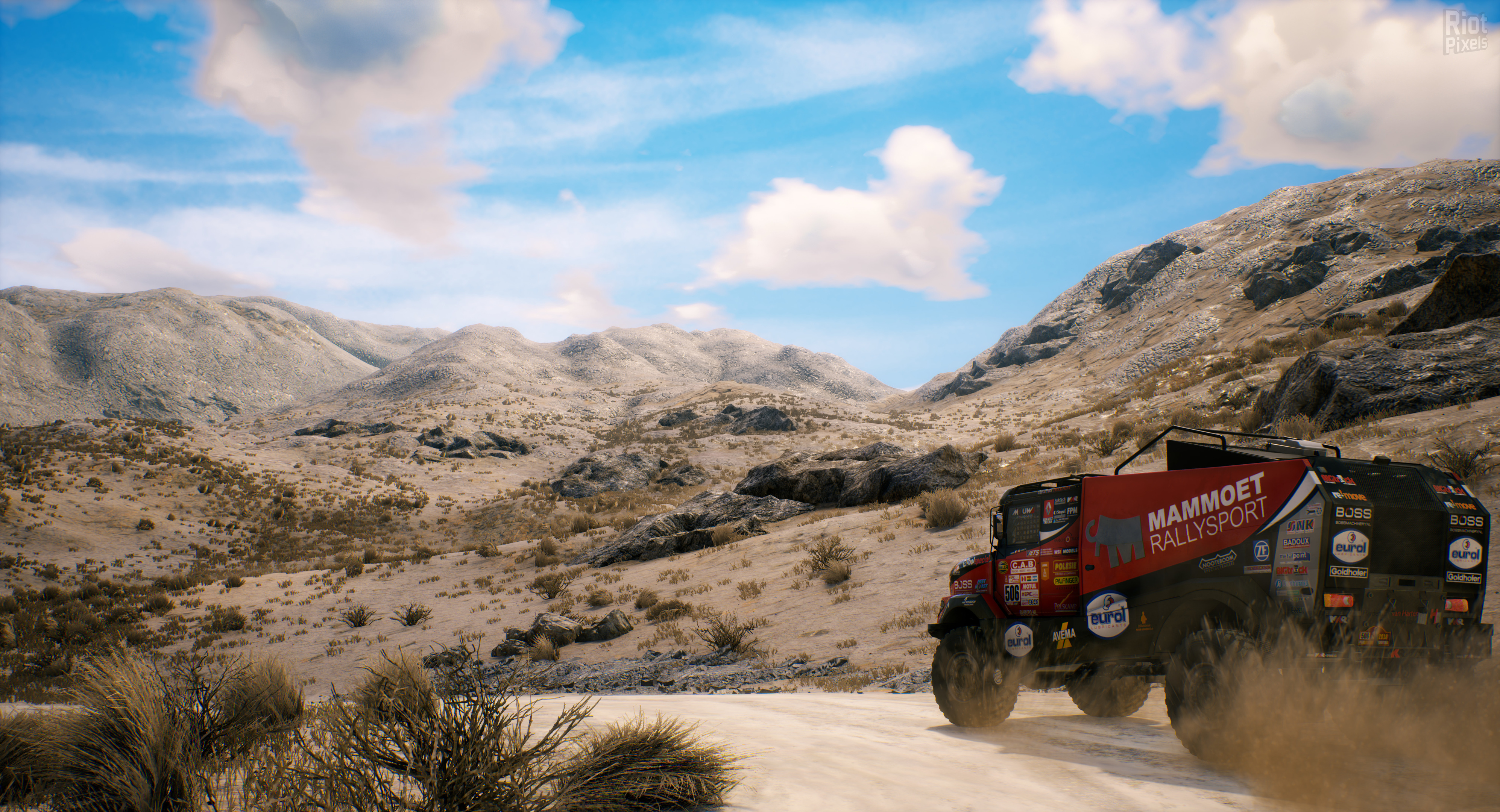 For people who do not know how the Dakar works.  It is a race across some of the most extreme terrain without any GPS equipment with extremely long distances to travel each day.  The format being used is called Rally raid.  Rally raid is actually a really large scale navigation game seeing racers dash between checkpoints trying to beat opponents as well as not destroy their vehicles in the process.  Not having GPS devices mean the driver and navigator need to use a compass, paper roadbook and the odometer of the vehicle to navigate their way to the checkpoints.

No other game puts as much emphasis on navigation as Dakar 18.  When you start up the game you will be taken through a tutorial.  It is HIGHLY recommended that you do not skip it.  You will be told how to read your roadbook and understand all the scribbles that you will find there.  Once you have completed the tutorial… do it again!  If you are not a veteran and you are highly comfortable with navigation it is recommended that you select the rookie setting.  Rookie setting will give you a Compass indicator to the next checkpoint when you are not on some form of road or track. You will be able to choose from all the vehicles that take on the Dakar rally, from the new 450cc motorbikes, quads, normal vehicles and lastly the giant trucks.  Once again it is recommended that you use the latter two categories because it provides you with a navigator that will read the roadbook notes back to you which will save you from having to flick your eyes to the roadbook while trying to keep your car from getting stuck in a sandpit.  The whole aim of Dakar 18 is to let you experience what it is truly like to compete in a rally raid.  You will need to read the roadbook, use the knowledge and hints given to by the book and then look for the visual cues in the environment to guide you to your next location.  These cues can range from a large rock, a clump of grass, remnants of a house or even a car track disappearing over a dune…  all while trying to not destroy your vehicle.  Camera modes are rather interesting in Dakar 18, the normal bumper and chase cams are available if you want but the experience only hits home when you use the cockpit view where you will be overwhelmed by the noise, as well as the helicopter view for those “tv-like shots” of you careening through the desert. 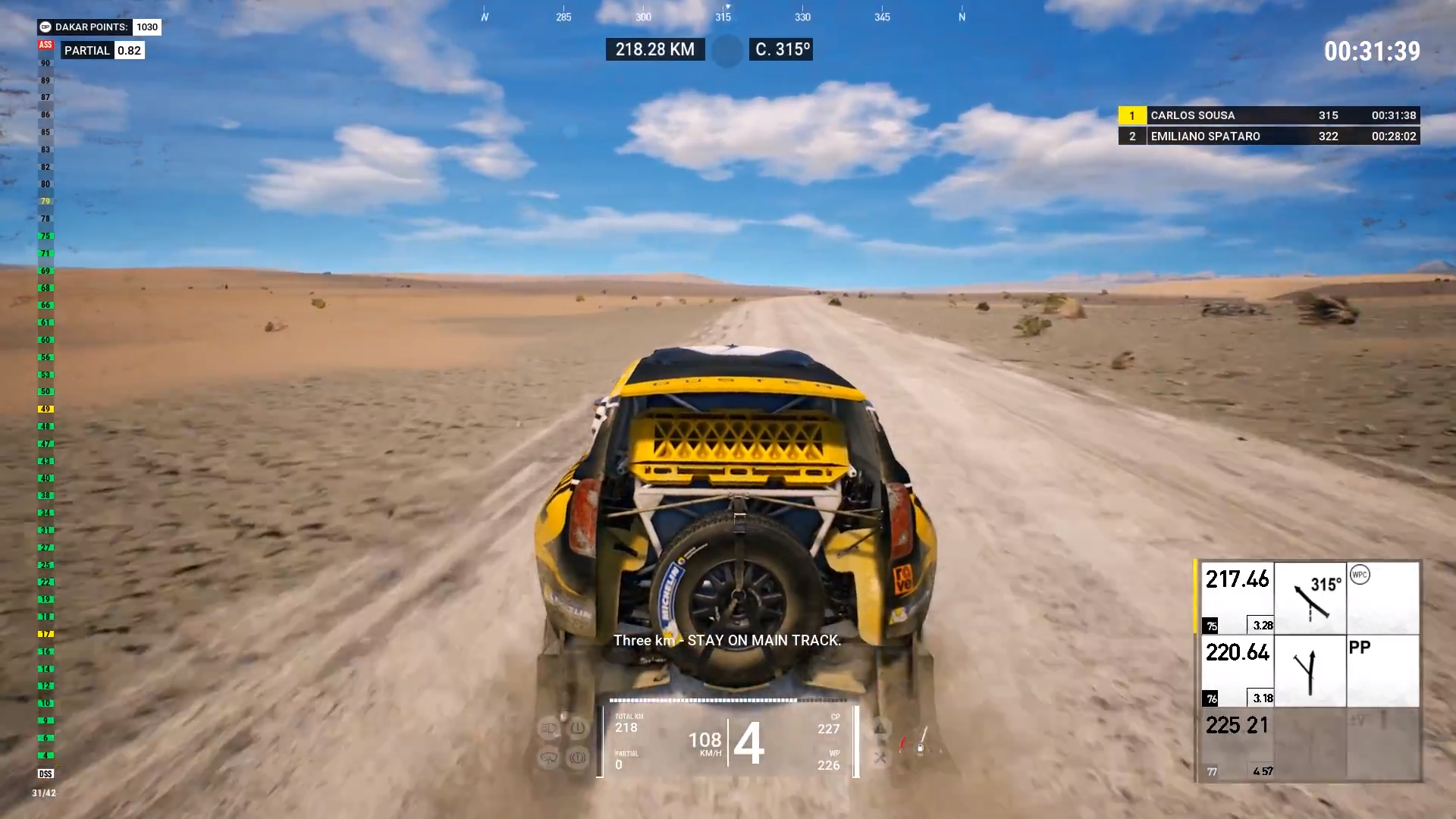 During the opening stages of Dakar 18 you are racing over dunes and through gorges in Peru which mostly consists of just sand.  This might paint a bleak picture of the surrounding but the way Dakar 18 has managed to capture the seemingly endless rolling dunes is breathtaking.  If you ever wondered what it might be like to get lost in a desert, don’t look at your road book for a few minutes and you will quickly find out what it feels like.

After the day-one patch (which arrived a week late) there was a large graphical upgrade which did help a rather lack luster graphical experience to become more acceptable.  Nothing special like some of the other racing titles out there but Dakar 18 does not give you the feeling that it ever wanted to compete on a graphical level.  Post patch vehicle dynamics and physics have improved dramatically.  Vehicles drive differently from other classes,  Steering the vehicle through different terrain now feels that way where as before every terrain felt the same.  This being said Dakar 18 tries really hard to be a simulator but the driving mechanics are definitely arcade like.  Hopefully this will be patched in upcoming patches. 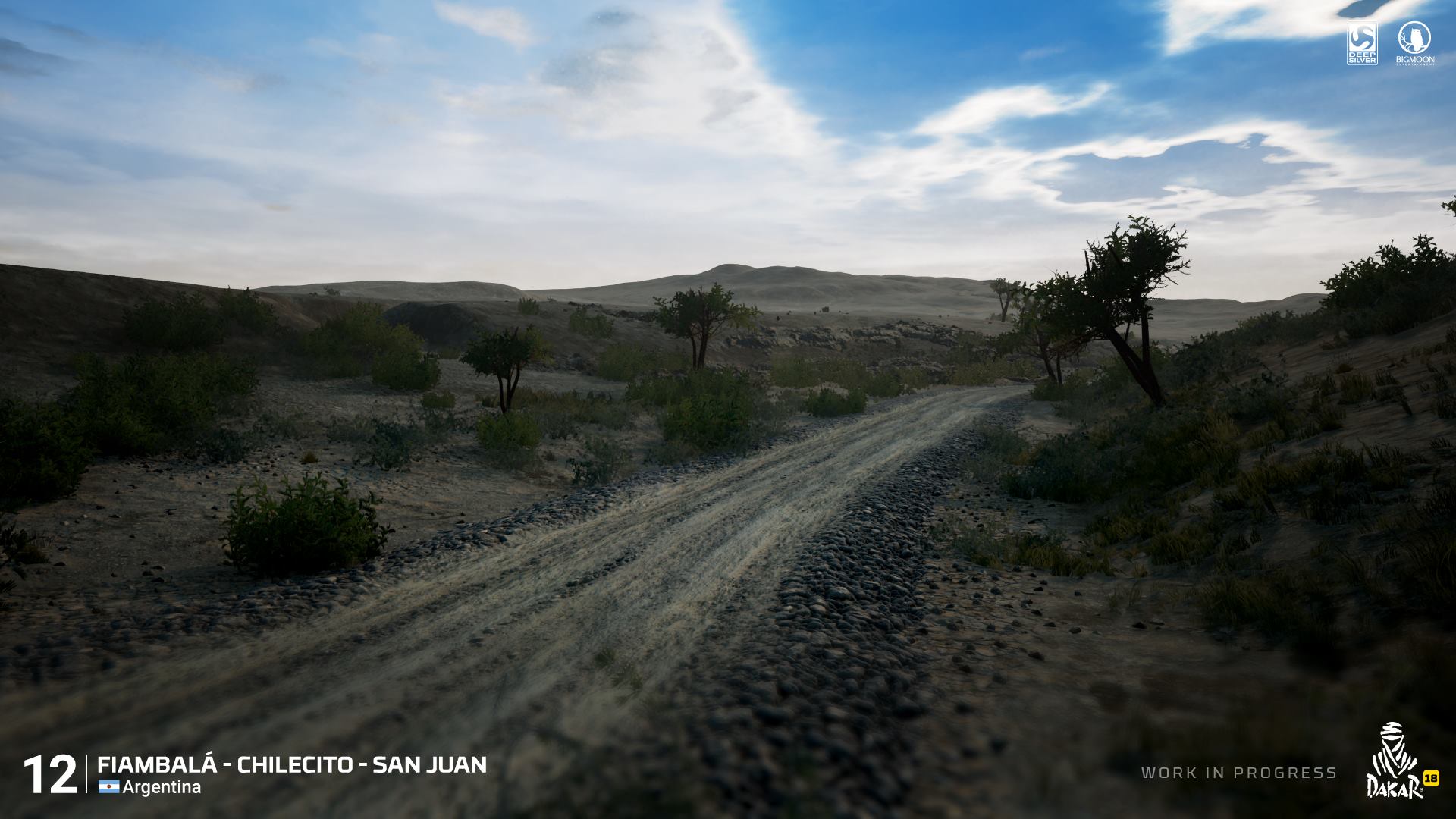 Vehicular damage is a large aspect of Dakar 18.  Simply putting foot to the floor and flying over sand dunes sure sounds enticing but in no-time you will need to stop and repair your vehicle which will end up costing you valuable minutes and see you dropping down many spots on the leader board.  The drivers and vehicles have been faithfully recreated in Dakar 18 seeing all the faces and liveries from the real Dakar rally appear in the selection menu.  This goes a long way in strengthening the realistic aspect of Dakar 18. 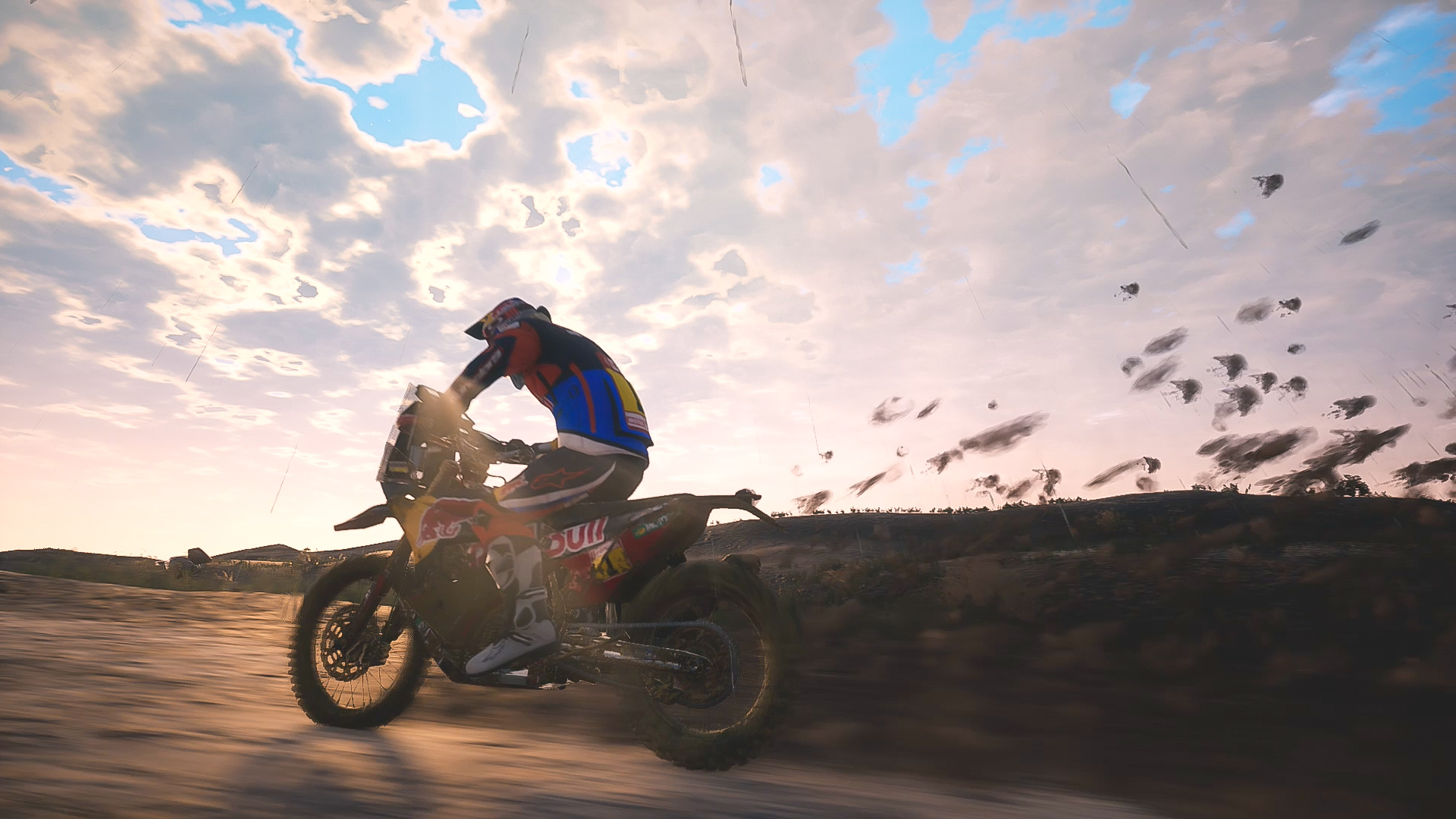 Simulators are usually rather barren games.  Lacking enthusiastic cut-scenes, energetic music and general refinement when it comes to the aspects that they are not trying to be a simulation of.  Dakar 18 doesn’t offer much when it comes to game modes.  The career which is the obvious mode that takes you through all the stages of the Dakar rally.  There is a multiplayer mode which includes couch co-op via split screen which will have you and a friend jump into any of the stages available throughout the race for some fun in the sun and sand.  Treasure hunt will see you hunt for random items through stages you have already completed.  This becomes tiresome really quickly, slowly driving around an area you have already slowly driven around in without any sense of purpose really doesn’t sound appealing at all.  No matter the game mode you choose they all boil down to one fundamental idea: using a roadbook to travel through a 5.791 square mile explorable map racing from point to point with minimal assistance.

Dakar 18 has a identity crisis.  It does not know whether it wants to be a full on simulator or a more casual arcade racer.  Dakar 18 is by no means a bad game, yes it lacks the game modes and the graphical polish many of its rivals offer.  The fundamental idea the Dakar rally is brilliantly captured.  No other title captures the fundamentals of rally raid like this game.  Rally raid makes for really abrasive gameplay.  In any other game, racing or not, getting lost is considered a bad thing.  In Dakar 18, getting lost is where the game begins and where Dakar 18 shows what really makes it a great game.  From the start Dakar 18 can be underwhelming and frustrating with its lack-luster graphics and infuriating navigation, but if you invest time to understand what Dakar 18 is trying to achieve, you might be pleasantly surprised.  With a little open-mindedness many driving game fans should find enjoyment – even though limited – in the Dakar experience.

Thanks to Apex Interactive for supplying the review game