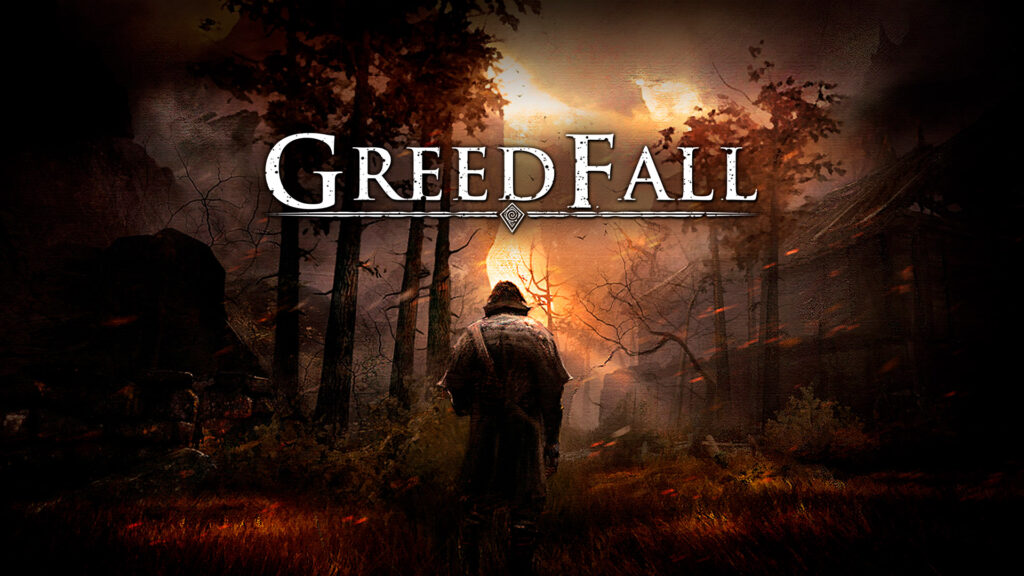 When it comes to RPG’s, you are instantly drawn to the likes of the Witcher-series, or Dragon Age.  And for good reason.  They are arguably some of the best RPG’s around.  Greedfall, and the developers, Spiders, decided to take a different approach.  Instead of trying to compete with the likes of CDPR, Spiders decided to go back to the roots of RPG.  Back to the Dragon Age-days.  Instead of being a completely open-world game like ESO or the Witcher, they opted for the semi-open world, which they are known for.

Personally, I think this is a wise decision from Spider studios.  Instead of falling into the trap of being compared, they have taken a step back, allowing them to create their own identity.  After playing through some of the early hours of Greedfall, I was pleasantly surprised.  I was instantly taken back to the glory days of RPG’s.  Where my love for the genre started, all the way back to childhood days.  From the start, you are met with deep story-telling.  The type that has you (and needs) your undivided attention.  environments that are beautifully crafted, although not as living as the Witcher 3.  Greedfall could very well be one of the hits of 2019 as long as you tune your expectations accordingly…

Spiders does what they do best, worldbuilding, and the world in Greedfall is great.  Set in the discovery-era.  The muddy and moody streets of Serene, this first city you will step into, draws inspiration from the likes of Paris in the 1700s. After creating your character you will be met with a rather long prologue set in the streets of Serene.  It is here where you will experience many of Greedfalls mechanics and get a strong sense of what is happening to the people of Serene.  Lore can be found everywhere if you are willing to listen… 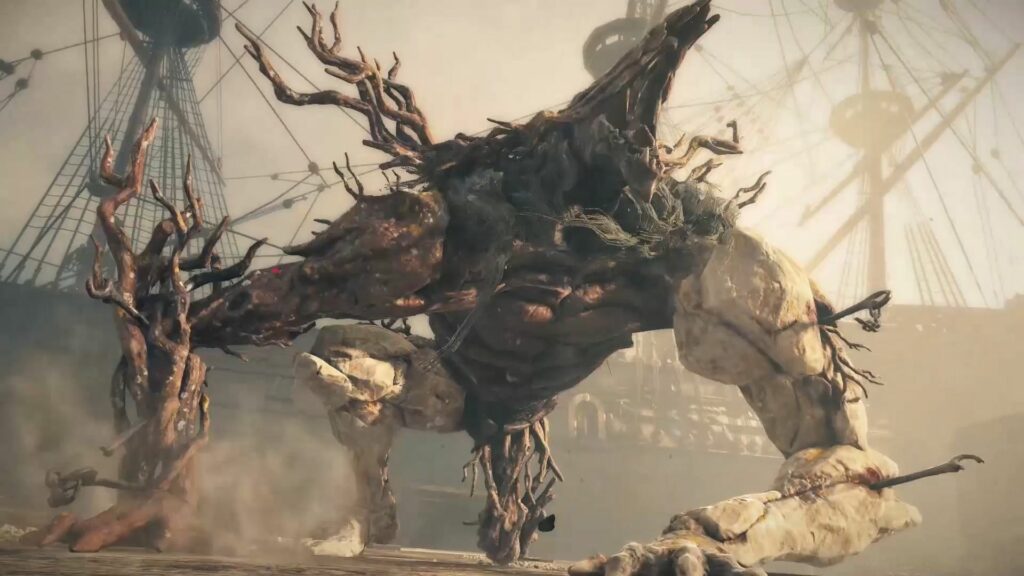 Greedfall makes its intentions known from the first mission.  Get onto the ship for your voyage to the new world.  Sounds simple enough.  It is not, you have a few loose ends to tie up before setting sail.  The governor has not yet boarded the ship, still too drunk from the stupor he had the night before.  Time to put on your detective hat and find him.  Treading around Serene and asking fellow patrons is not a simple and easy way.  Asking the pub owner of his whereabout will lead you to either repairing the broken furniture from the governors rowdy night or simply pay to have them replaced.  This simple mission shows that Greedfall is not going to bombard you with “fetch and carry” missions or simplicities like other RPGs.  No, it has deeper dialogues where speaking too much or too little can change the perspective of the interaction completely.  Greedfall at its heart is a detective game and a rather good one!

Once you reach the island of Ter Fradee you will discover that there is more than 1 faction trying to colonize the island.  The main reason for you heading to Ter Fardee is to find a cure for the illness that plagues Serene, as well as your mother, called Malichor.  It is not long that you will realize that characters are not divided between the traditional good- and bad guys.  Greedfall weaves a terrific story with tribes and factions having their own unique traditions and nuances and even views on actions and what happens throughout the game.  This goes an extremely long way to really flesh out the story and make it believable.  Greedfall also does not use the well-known morality system, meaning players will need to make choices based on their own moral compass.  This is very refreshing as sometimes the “right” for of justice is not always the justice that fits the crime. 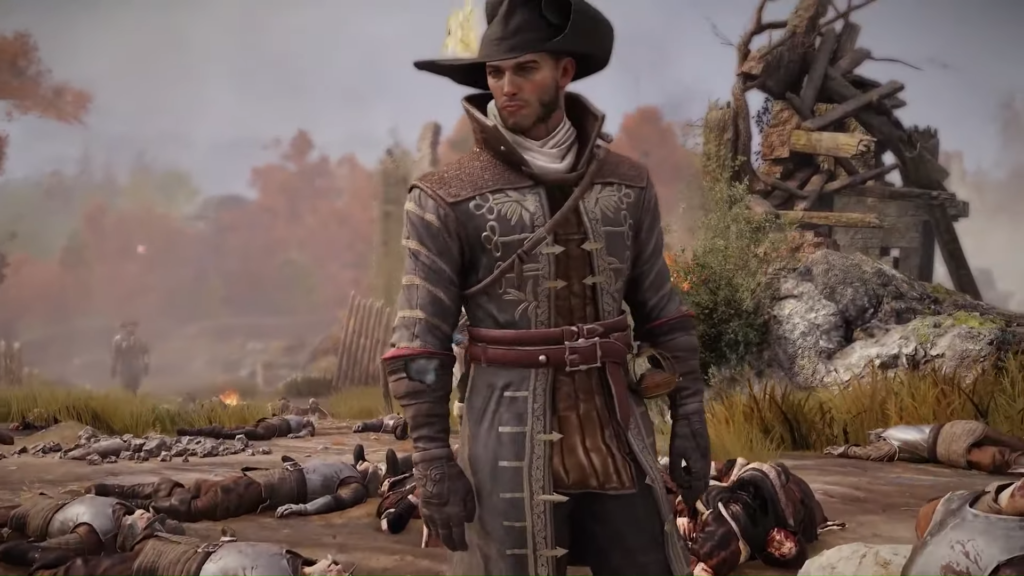 Greedfall is by no means a happy place like many other RPGs try to portray.  Greedfall takes on some heavy subjects in the quests which I have not often seen touched let alone peeled open as Greedfall does with its superbly written quests.  Some of these sensitive topics include colonization, religion and politics.  And without the moral system, these topics mixed with personal opinions and views can bring out interesting story arcs.

At first glance, the graphics of Greedfall are tremendous.  Living cities with wonderful palettes of gloomy colours to match the general life at the time.  Opposingly, on the island bright and vibrant colours which match a diverse, but still realistic environment.  Taking a little closer looks will show some cracks in the graphics but mostly they are easily overlooked.  Facial customizations, yet limited, is good, the characters faces seem to match emotions when speaking and generally look life-like.  The main characters that is…  NPC’s are beautifully designed but at times become repetitive in the use of outfits.  Some of the issues that do take away from the realism are that opposing faction soldiers wear identical armours. 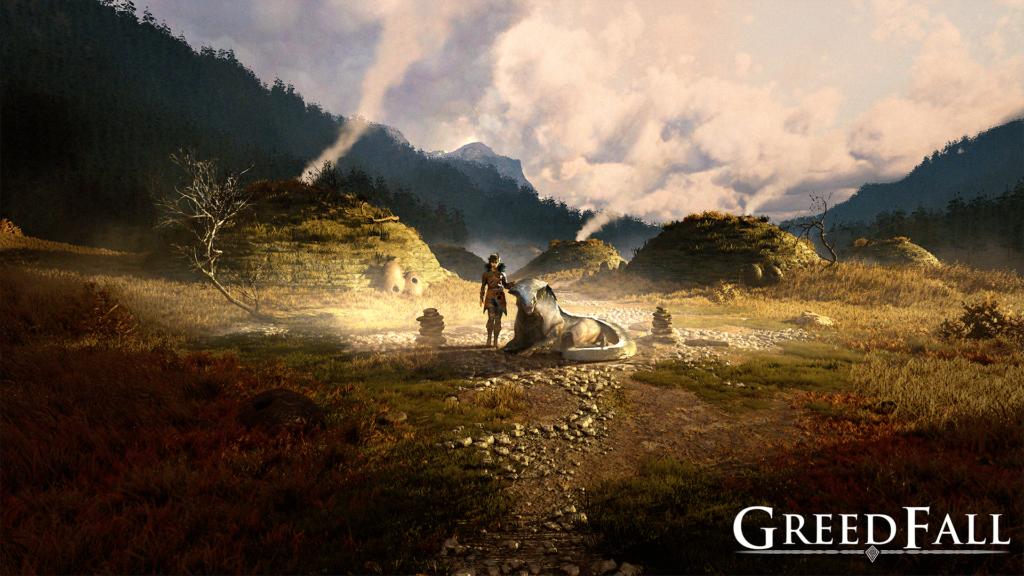 Facial animations certainly did impress when you compare it to the Technomancer, not Witcher 3 levels just yet but leaps and bounds in the right direction.  But alas, this is overshadowed but the rather clunky way the NPC’s move.  Greedfall tried hard to give characters individual feel, by even introducing dialects and accents for the natives.  Although the voice acting is of really high quality and there is tons of dialogue to work through, there are times that the accent was dropped and picked up at a later stage.
But as a whole, Greedfall does well to draw you in and keep you glued to the story and actions of characters around you, even if they do, at times, lose their “life-like” aspects to a robot-like movement, or lipsync being out.  All small things that a simple patch can fix.

This is the first aspect of Greedfall that had me doubting.  Yes, the Witcher 3 has changed everyone’s perception of what RPG fighting mechanics should be.  They need to be fluid and smooth and free.  Greedfall is not that!  The fighting mechanics in Greedfall is quite the opposite, not quite as clunky as DragonAge titles of old, but still rigid.  Once you turn down the camera sensitivity, which at normal will have you spinning around the world at light speed, things are better.

Greedfall does have a tactical pause function which allows you to queue up abilities such as healing, much like Final Fantasy (of old) and Dragon Age does.  The clunky fighting mechanics are less an issue and more a feature.  Greedfall made it clear that they want it to be a homage to old RPG titles, and that is what the mechanics are.

Your team members, which you can swap out, all have unique traits in battle as well as in social environments.  Having the correct party member with you at the right time can be beneficial on both the battlefield as well as when trying to pull information regarding your next quest.  Each team member can be equipped with weapons and armor as well as trinkets etc.  Changing clothes do change your character’s appearance aesthetically which is always nice.

But one of the aspects that will have majority of RPG fans rejoicing is stats.  Everything that you can pick up or equip will have stats.  With stats comes proficiency, which Greedfall does by means of skills and traits.  Want your player to be better at blunt weapons, equip more points to blunt weapon mastery.  Want to be a better lock picker (which I suggest you focus on),  apply more points to lock picking. 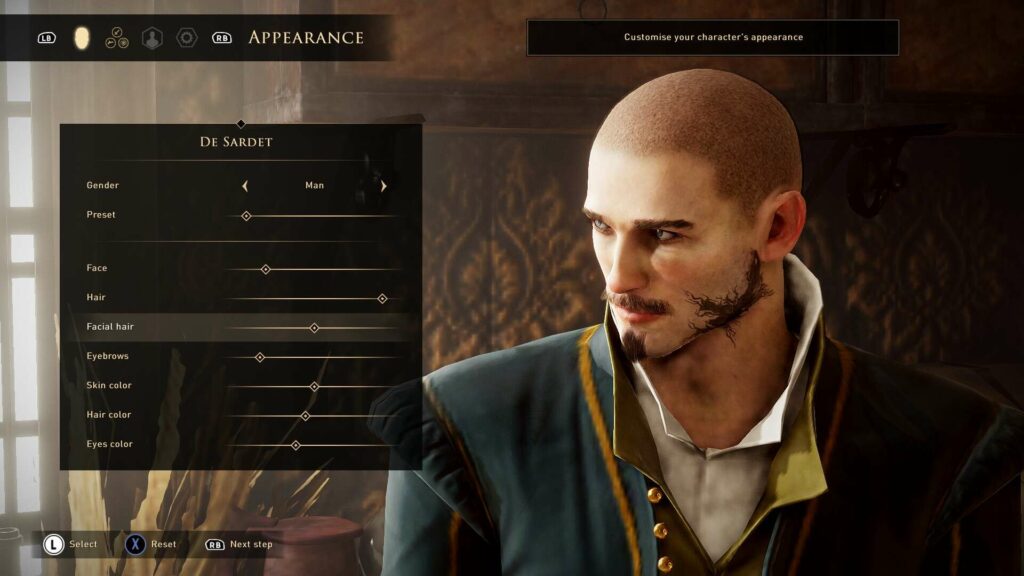 Combat, apart from the clunky mechanics is genuinely great and enjoyable.  Whether you are going up against a challenging boss or slaying grunts, combat is not something I found myself wishing would pass.  Instead, I enjoyed using my musket to etch away at armor until I could wield my sword and dish out a flurry of damage that even Zorro would be proud of.  Then there is a whole magic system that I have not even tried out yet!

Your squad members, however, cannot be controlled much, they tend to do whatever they deem necessary which in most cases is not the needed thing.  This is a little disappointing in a way because this also creates a lack of a tactical aspect for Greedfall due to your squadmates automatically engaging the enemy when you are trying to sneak past.

Greedfall might have its few issues, but these are easily corrected in a patch, what can’t be fixed with a patch are the things that Greedfall has got spot-on!  It provides stunning narratives coupled with great stylized and visually spectacular environments that won’t let you even notice that they are not completely open-world.

If you are a fan of RPG’s like Dragon Age, then Greedfall is for you!  It doesn’t just give you the RPG fix that we have all been craving for too long now, but it exceeds that.  Greedfall is not merely a time-waster until the next AAA RPG comes along, no it is a fully-fledged title in its own right!  Spiders have come leaps and bounds from their rather poor showing on the Technomancer to delivering a great title in Greedfall.

If you have time, and you like RPG’s, get Greedfall.  Thank me later.

Special thanks to Apex Interactive for the review copy