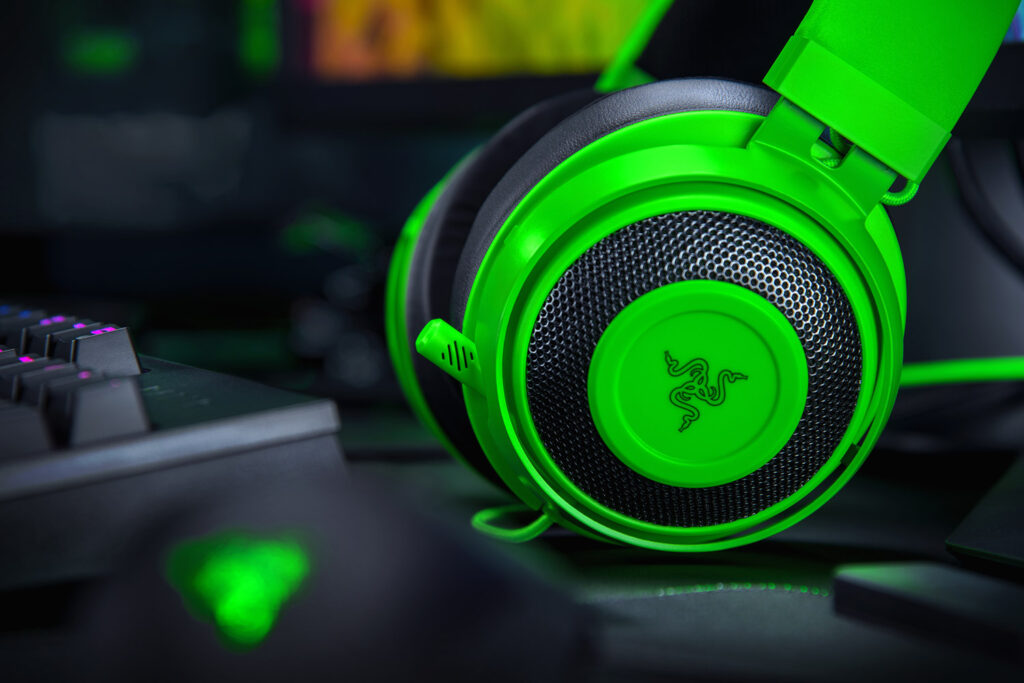 The entry- to mid-range headset market is a crowded one indeed.  With the likes of Astro, Turtle beach and PDP flooding the market with their budget-conscious headsets.  It can easily become overwhelming and difficult to decide which one is for you.  Razer doesn’t make this any easier when they dropped the latest version of their tried and tested Kraken series.

I have reviewed the Razer Kraken before in its previous generation and I was on the fence.  It was decent but lacked a couple of essentials.  Let us see how the 2019 version goes about reclaiming current fans as well as tick a few of the unticked boxes of previous years.

Razer has a pretty distinct design and colour scheme.  The Kraken looks exactly the same as the previous generations.  Razer, unlike some of the other big names in the gaming peripheral game, are not scared to be bold with their designs.  The Kraken features bold and big earcups that stick out far with a bold Razer logo on display.  Did I mention it is VERY green?  Razer makes a very clear statement.  They make peripherals for gamers.  The Kraken features the same retractable microphone as in previous generations as well as the same thick padded headband.

Build quality remains the same, which is not a bad thing.  The Razer Kraken feels strong and sturdy.  Sturdier than some headsets that fit into a higher price bracket.  Inside the box, you will find the headset itself, the cable with the inline volume control as well as mic mute slider, as well as a splitter for pc use.

The previous Kraken that I reviewed had a few shortcomings when it came to comfort.  Razer did listen and they have made the earcups oval-shaped.  This makes a massive improvement in comfort around the ears.  They have also filled the cushions, which is covered with faux leather, with a gel-based foam making it fit the contour of your head much better.  The thick padded headband, as well as adjustable cups (up and down), helps to find the perfect fit.  With the Kraken being a heavier headset, the demand for a firm and strong headband is a necessity. 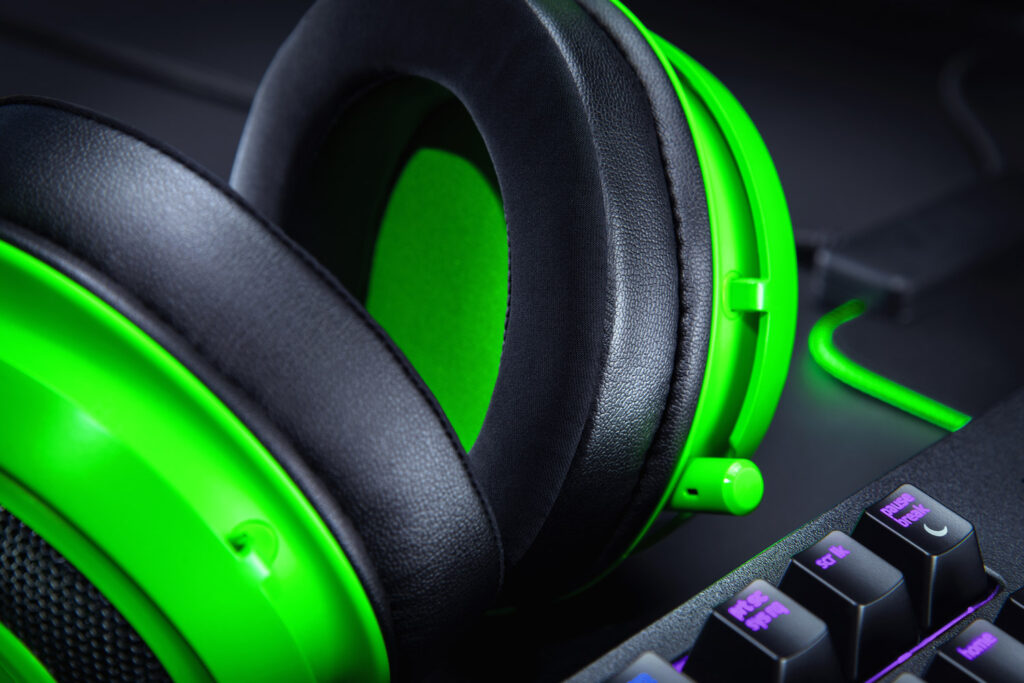 The only letdown in the comfort department is the fact that the earcups do not have the ability to swivel.  This causes some troubles with finding a snug fit and also creates leaks which don’t help when trying to achieve passive noise cancellation.  But, this can be solved if you do a few minor adjustments and find the sweet-spot in terms of position on your head.

Ultimately, the reason for buying a headset is for the sound.  Being in the sub R1500 there is a fair amount of competition.  The likes of the Astro A10 and Steelseries Arctis 3 really set the bar rather high with wired headsets.  The Razer Kraken, unfortunately, doesn’t come with a mixer so the mixing levels will need to be done in-game or via a 3rd party app.  The volume wheel sits nicely and neatly packed on the inline control and gives sufficient volume.

The Kraken does a good job when listening to a wide variety of music.  Delivering punchy and deep bass which has enough oomph that you can almost feel the bass tones kicking.  Mids are very audible and allow for clear tones.  The highs are not that high and often they get lost and leak into the mids.  During times with less mid-range, you do experience the highs, but they are drowned out by the mid and bass tones. 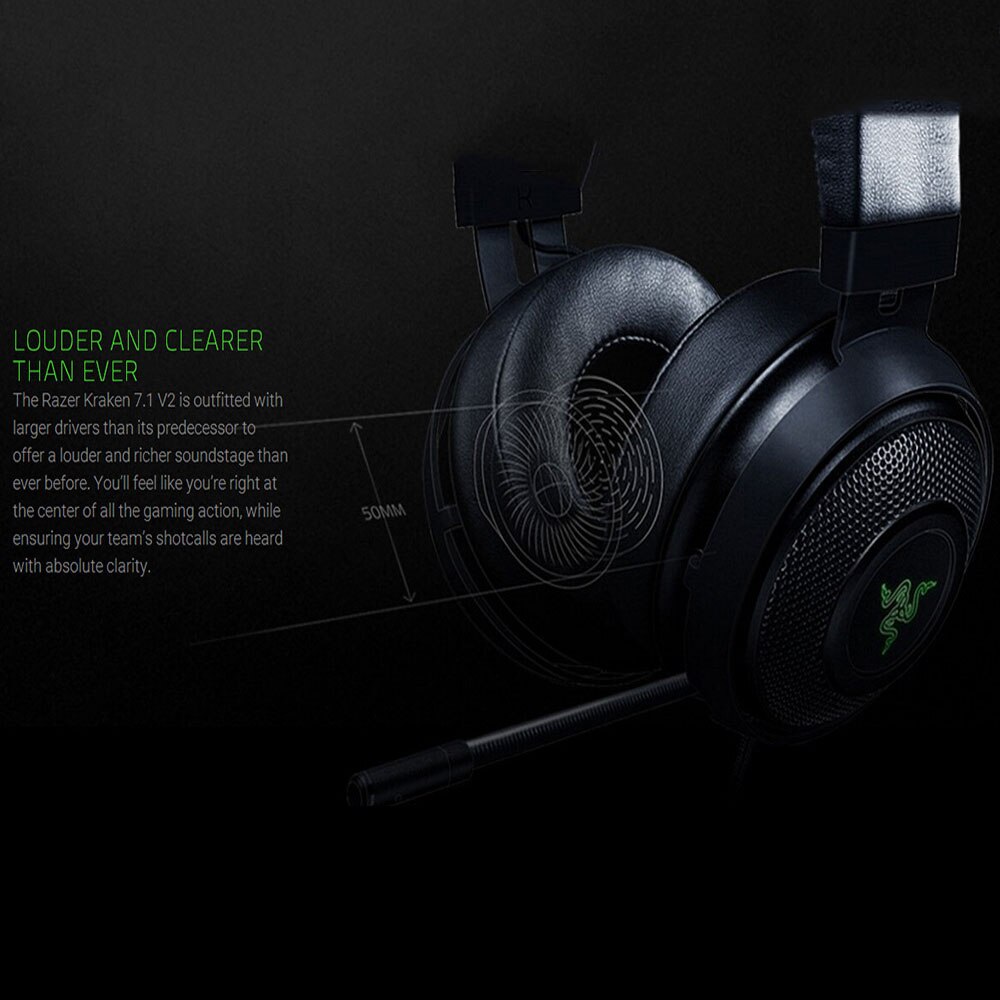 When gaming on PC, the same was experienced but this can easily be adjusted by simply applying an equalizer which then made the tone balance much better.  Unfortunately, on console, there are no equalizers to be used.  The Razer Kraken, however, does have really good spacial sound.  Playing games such as R6 Siege and Apex Legends on both console and PC.  I usually use an Astro A40 TR which uses an external amp, allowing for massive amounts of customization to try and use sound to the best advantage possible.  The Kraken obviously does not have all the gizmos the A40 TR has but it does a great job of indicating sound direction on both console and PC.

The Razer Kraken retractable mic is nothing out of this world.  it does the job and it does it well.  It gives clear voice to your party without any frills.  The lack of mic monitoring is a letdown as most of the competition in this price range do provide monitoring.

The Razer Kraken is a commendable and very capable headset.  It delivers good comfort matched with gamer orientated styling all while delivering superb spacial sound.  The sound spectrum is great but the highs can be a slight bit stronger.  Add in swivel earcups and mic monitoring and the Kraken is nearly perfect!

All in all, Razer delivers once again, keeping up their name as one of the leading names in gaming equipment!

Special thanks to Apex Interactive for providing the review item