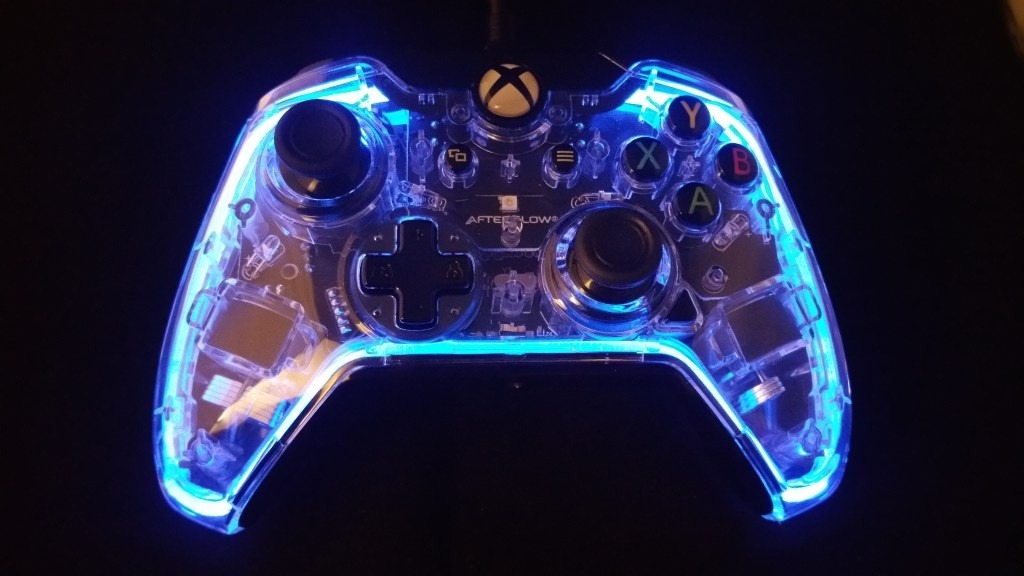 I am rather full of crap, and I am happy to admit that.  So with the arrival of the PDP afterglow controller I thought that I had already made up my mind.  The original Xbox one controller is really really good.  good weight to it, good build quality and it just works.  I have had both my controllers since launch of the Xbox 1 and i have not had any problems, they have been dropped ( I cried a little when that happened) yet they keep going.  So my opinion was instantly that the PDP afterglow was nothing more than a cheap knockoff with a few added gimmicks and that it would show its own flaws within a few hours of playing with it…  Could I have been more wrong…

The unboxing of the PDP afterglow is nothing to write about (ironic).  Simply the controller in a box.  No frills…  Literally!

The PDP Afterglow controller is a wired Xbox One/Windows 10 controller.  It has a clear plastic finish which is rather cool to see all the insides on display.  It really makes you appreciate all the work that goes into a controller that, on a daily basis becomes our gun, sword, steering wheel or even the item that grants up the opportunity to be true gamers and experience many lives lived.

On the surface this controller simply looks like a wired controller with some cool strip lighting inside, 2 programmable wheel/buttons at back of controller and that is it…  But it is not!  The Prismatic, as it is called, looks very subtle from the outside but boasts a fair amount of gadgets and features for its measly pricetag.

Firstly, the signature prismatic LED feature can have you quickly cycle through a variety of colours and have you choose your favorite one.  Or have the colours just change at will.  If you have the need for zero distraction, simply turn it off.  All of this without even having to move your fingers off your favorite keys on the controller.

Personally I play alot of FPS games which as most people know really give your analog sticks a pounding.  Any hardcore gamer has either had to bid farewell to a trusted controller due to stick lean or dead zones becoming too big to bear.  The PDP controller has superb sticks!  Made extremely well I find more grip and accuracy with them than the original controller sticks.  They are also slightly longer which helps when you need the extra precision to get the game-clinching headshot at the death.

I still have the original Xbox One (someone want to sponsor a X, for review purposes???) so my controllers are still V1 without the 3.5mm jack.  So when I do reviews of newer headsets which only come with 3.5mm jacks I resort to using the ever elusive chat adapter.  Anyone who has ever needed to look for one of these babies knows what a struggle it is.  With the V2 controllers out now at least 3.5mm jack is now a standard but at close to R1000 for a controller buying a new one for just the 3.5mm jack is ridiculous.  Luckily the Prismatic is, once again, here to save the day.  Coming in at easily under R500 the Prismatic is the logical upgrade!

Dual Rumble drives with Red LED’s that flash when vibration is activated also adds a nice touch in games such as racing when you wander off the track, or get shot in a FPS.  Great feeling triggers also add to the good feel in hand that the Prismatic brings to the table.

Another way that the Prismatic steps ahead of the standard controller is with its dual multi-function wheels that has 6 programmable actions…  Where can you find a macro-enabled controller at this price anywhere else?! 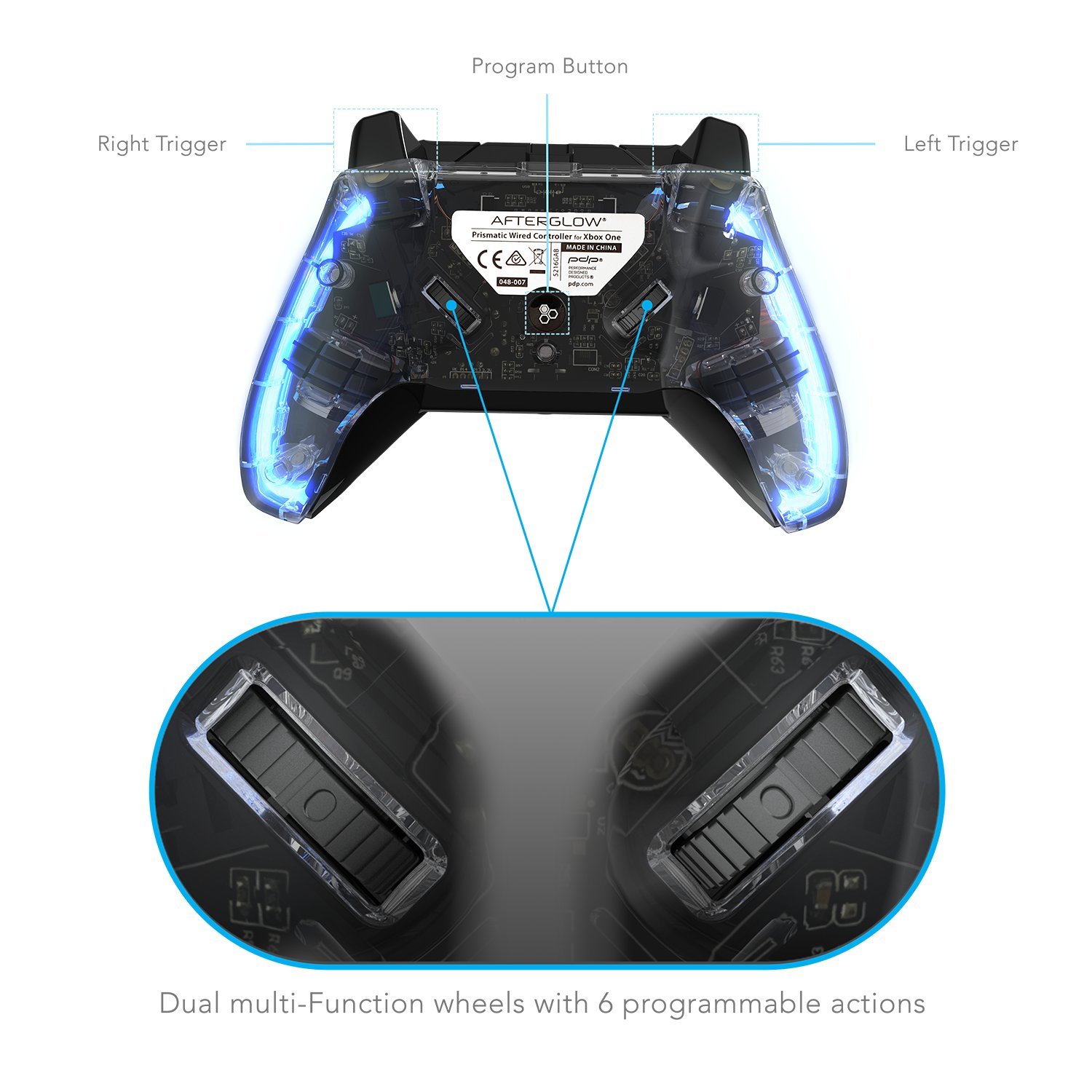 When I was reviewing this controller the PDP hub on the Xbox store did not want to recognize my controller so I did not have any time to play with the app at the moment but I will update the article once I have got it working.  But honestly I don’t think it is even needed as all features can be used without the app which is a welcome features in my opinion.

As I said earlier in this review the Prismatic arrived at my desk and I had made a opinion of it without trying it.  To be honest when it arrived I didn’t even open it until the next day, I was that convinced that it was going to be bad.  I have never been this wrong.  Yes it is wired, and that is probably the only negative I can find for it.  Even being wired is not such a turn off.  If you game at a desk or you sit fairly close to your screen or TV then wired is not a problem.  Hell this controller serves as a Xbox and PC controller at half the price of a standard console controller!

I am struggling to find the words to describe the feel of this controller.  If it was not for the smooth plastic finish compared to the slight matte finish of the Microsoft controller, in a dark room you would not know you are using a 3rd party controller.  The build is solid, when the vibration is activated it does not sound like the controller is falling apart.  Button presses feel strong and true, not hollow like many cheap controller do!  Simple controls on the controller to control the LED, Rumble lights as well as chat and sound volume are self explanatory and I caught on much faster than I have with other controllers such as the Razer Wolverine which I reviewed before.

This is a very easy verdict to make.  If you are in the market for a new controller and wired is not a problem, the PDP Afterglow prismatic Controller is a no brainer!  Cheaper, better, with more features than the original Microsoft controller you would be a fool to not get this controller.

Once again a special thanks to Apex Interactive for always being at the forefront of the latest and greatest tech and allowing me to review them as they arrive!