When Roccat announced the Horde AIMO and marketed it as a “best of both worlds” hybrid mechanical keyboard I was intrigued.  Taking the having the precise linear distinction of mechanical keys, paired with the soft and quiet sound and feel of a membrane keyboard seemed to be a fantastic combination.  Making the keys low profile even upped the excitement by another notch.  But this was not the only aspect of the Roccat Horde AIMO that had people excited.  While bringing the best of both, the Horde AIMO would bring a host of popular gaming keyboard features such as programmable keys, RGB control, multimedia keys to name but a few.

Opening the Roccat Horde AIMO and taking it out of its box, you instantly feel that it feels old school.  Generally, that would insight a feel of quality, in this case, it feels more like old design and build quality.  What needs to be said is that the Horde AIMO is big, no I mean VERY big!  A large part of this size is taken up by the removable wrist rest, which is rather flimsy but not having it attached does make the edges of the Horde a bit rough.  If you are someone who likes symmetry and things to be either straight-edged or rounded, the Horde AIMO is not always sure who it is catering for.  With rounded finishes here and sharp, straight edges there, it is not quite sure what design it wants to follow.  The left side looks sleek and has perfectly placed macro keys.  On the right, it has a host of keys and features that can be found on most gaming keyboards in recent years.  The large dial on the top right can be used as a Windows 10 scroller wheel straight out of the box, and when paired with the feature keys, can be used to scroll through RGB settings and many more, nice feature and always handy when wanting to turn the volume up or down.  The top left seems to feature a cellphone holder like many of the older Roccat keyboards used to have but upon closer inspection, it seems to not be so.

Roccat claims that the “memhanical” keys are a mixture of the precise and linear movements of mechanical keys and the soft and quiet of membrane keys.  Roccat also claims that the keys don’t need to be pressed all the way to actuate, upon using and testing I find the statement to be not true.  The buttons would only actuate when bottomed out, not a deal-breaker by any means, but if you have ever experienced a true mechanical keyboard with either the Cherry MX Brown or Logitech’s Romer G-switch, you will know how pleasant it is.  The low profile of the Horde AIMO keys also lends itself more to a membrane feel rather than mechanical.  For general use, the keys feel springy and don’t provide quite as much resistance as what I would expect.

The 5 programmable macro keys that are found down the left side of the keyboard has become a standard amongst most full-size gaming keyboards.  The Roccat Horde AIMO however, does have a long row of keys and a large dial on the top right side.  The dial is not only a volume knob when used in conjunction with the multimedia buttons, not only can the RGB effects be changed, but screens can be changed and RGB brightness adjusted.

This all sounds fantastic and works well in principle but in reality, it makes for a lot of tedious pressing and unpressing of the desired function that it becomes more of a hassle than it needs to be.  The idea is great, and if music is your main use for the Horde AIMO it will serve you well but for everything else, the software does a more than adequate job.

The Roccat Swarm software has been known as one of the more reliable software packages over the years, and with this being my first dabble with Roccat, I had to scratch around a bit to find out how the latest version of Swarm compares.

What I did notice is that it seems that Swarm does suffer from a few bugs at present.  Not only are you never sure if you have the latest version installed, the updater pop-up jumps out warning you that you are outdated, straight after updating.  But when making changes you should not click apply and then OK.  By doing this it seemingly reverts to defaults and you start the process over again.  Simply pressing OK and continuing stores the changes.

Another bummer for MMO fans is the lack of on-the-fly Macro recording which makes casting a vast array of spells or attacks in quick succession rather cumbersome.  Roccat’s AIMO RGB is described as a clever system that adjusts the RGB lighting to what you are playing.  I agree that the colouring is interesting although I can’t quite put a finger on what it is using to decide its colouring.  On the Roccat Kone AIMO mouse the lighting is bright and really beautiful, the Horde, however, is hardly noticeable in a well-lit room.

The Roccat Horde AIMO happily taps away at nearly everything you throw at it.  Be it playing CS:GO, some Rainbow Six Siege or Flight Simulator.  Typing is as pleasurable as typing can generally be.  But nothing quite sets the experience apart from a good quality office keyboard, let alone a mechanical keyboard.  Yes the Horde AIMO is cheaper than mechanical and more expensive than an office keyboard.  That is why it finds itself in an awkward grey area.

But, then again, it also did not perform tremendously better than a mechanical keyboard… 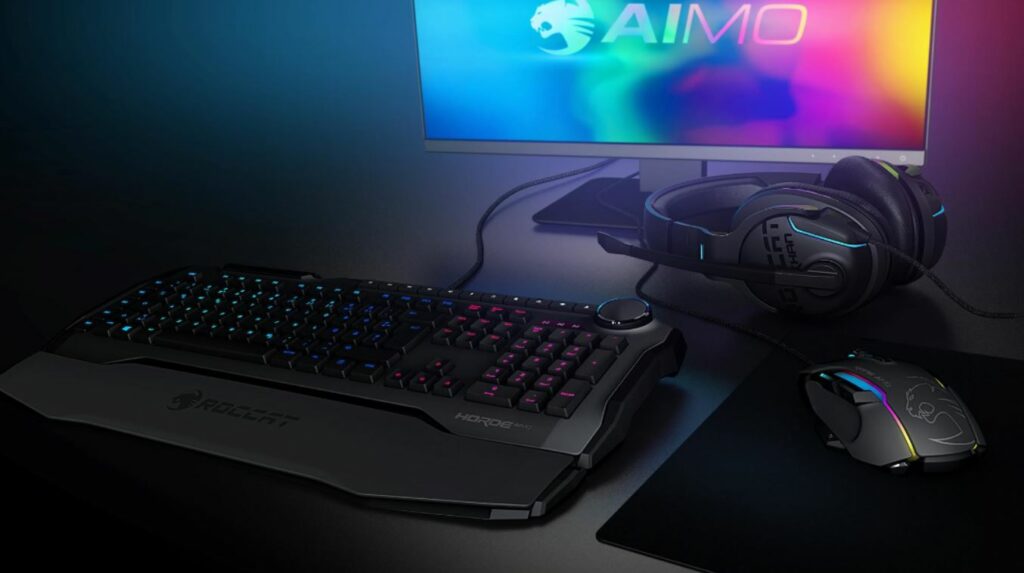 The Roccat Horde AIMO can be given credit for trying.  The membrane-mechanical keys, the AIMO lighting effects, and the many uses of the dial.  Did they all work out to the way Roccat planned? Probably not, but they are by no means terrible.

The Horde AIMO will definitely not suit those aiming for top spots in competitive gaming but for those who are willing to look past the questionable looks and slightly elevated price tag compared to other membrane keyboards.  Then the Roccat Horde AIMO is your keyboard.  I would personally hold off until they launch the next iteration where they possibly fix the shortcomings of this version.