Sequels are the toughest games to make.  If your first game was a success, then the sequel needs to pull all the good qualities of the first installment and tweak the weaker ones.  On the flip side, if your first game was rather lack-luster, then you are expected to revamp completely.  Both come with large amounts of pressure to deliver.  The Surge was a great title from the company that brought us Lords of the Fallen.  Lords of the Fallen was stunning, but was possibly too hot on the heels of the Souls franchise and copied too many ideas from the likes of Bloodborne and the Souls series.

The Surge 2 does, however, make some good changes and welcoming tweaks to the system that was used in the original Surge.  Unlike the first Surge, you now have the ability to build your own character.  No matter what character you build and choose however, you still start the narrative as a plane crash survivor after the nanites from the first game escape.  Surge 2 is more of gameplay with a solid narrative-type game rather than a strong story with decent gameplay.  The combat has been tweaked and feels wonderful.  Each rig with its weapons and armor falls into a well-explained class and easy to grasp.  Looking for a light and fast rig, the Operator is the way to go, prefer being a damage sponge, Goliath class is your go-to class.  And if you are looking for something in-between, Sentinel is your class. 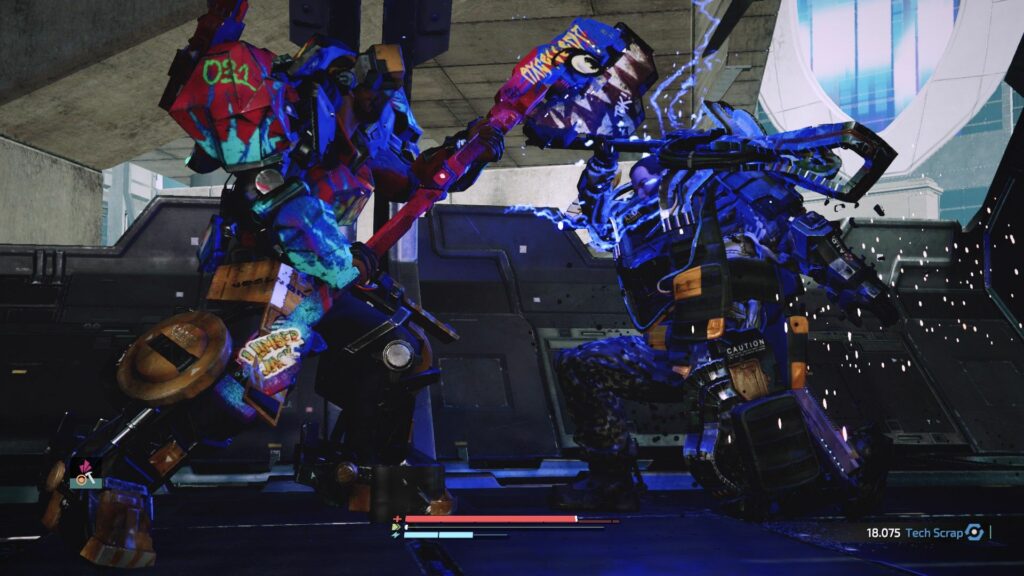 These classes can be upgraded using cybernetic implants, accompanied by a host of high and low tech weapons, you are sure to be having some dismembering-fun in no time!  What really struck me was how each of these weapons and armor that is at your disposal has an effect on the movement and flow of your rig.  When you are using the Operator rig you feel like you can chain attacks together and bounce between enemies like Spiderman, but on the flip side, you can be sent flying across the battlefield with a single blow.

Blocking and injectables are both new systems that improve Surge 2 dramatically.  The blocking and parrying system feels like it has been directly taken from For Honor.  For those not familiar with this system, it does take some getting used to but once you are comfortable, it is extremely robust and very rewarding.  The block and parry system works extremely well when using the goliath class with its extremely slow attack speed.  Guessing the attacking direction correctly will see you parry and counter which is extremely satisfying when done correctly. The newly added injectables also add a whole new dimension to the fighting dynamic.  Even though two goliath classes are identical, applying a variety of injectables can because both these Goliath builds to be completely different.  This increases the replay-ability of Surge 2. 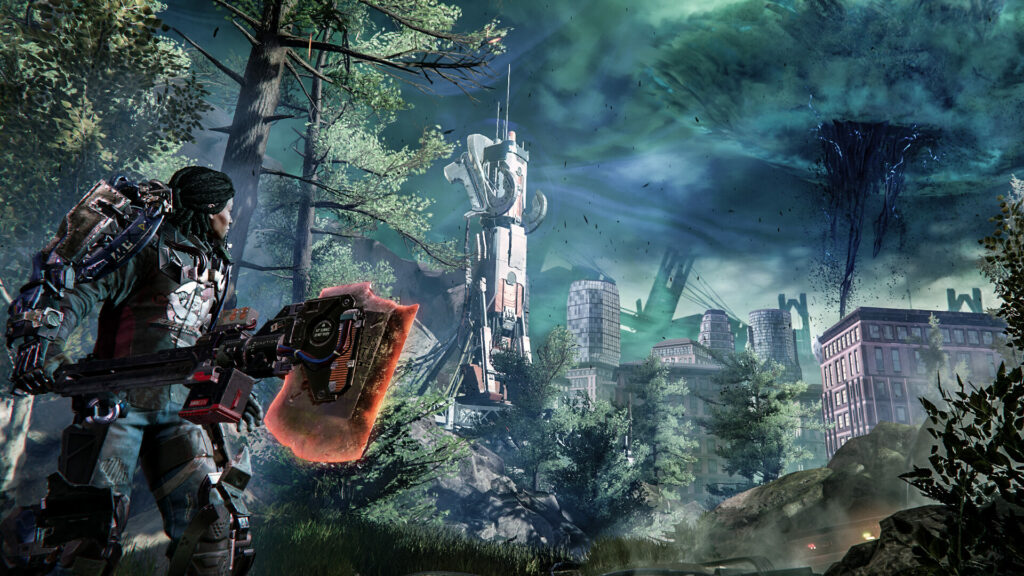 Executions are very clever and satisfying.  As before, you need to target specific body parts and once you have done enough damage, you can dismember that limb.  The animations for these dismemberments are spectacular.  But what makes it truly great is the way it integrates into the looting system.  In Surge 2 most of your loot is collected from downed enemies.  Instead of this loot just being random, the way you fight the opponent will determine the loot that they drop.  Looking for a very specific piece of armor?  You will need to find an enemy wearing that exact piece of armor and dismember it.  This gives the player reason to go and hunt down specific enemies.  At the same time,it puts an interesting take on the looting and grinding aspect because it puts less emphasis on grinding until you find the item you looking for and rather has you exploring until you find someone with that item.

Surge 2 has a straight forward story that is told the same way.  The plot has its moments that are interesting but apart from that the plot feels very direct and expected. As before the story is told by interacting with NPCs and picking up recordings that tell you more about what has been happening since the nanites have devastated the world.  The story of Surge 2 will take you to a wider variety of locales compared to the first game.  Instead of being stuck in industrial areas and cities.  Surge 2 will take you to a more diverse set of locales as well as have a larger variety of enemies to contend with.  It does, however, feel like Surge 2 put more effort into building more diverse and beautiful open worlds and left out a few touches on the plot and story aspects. 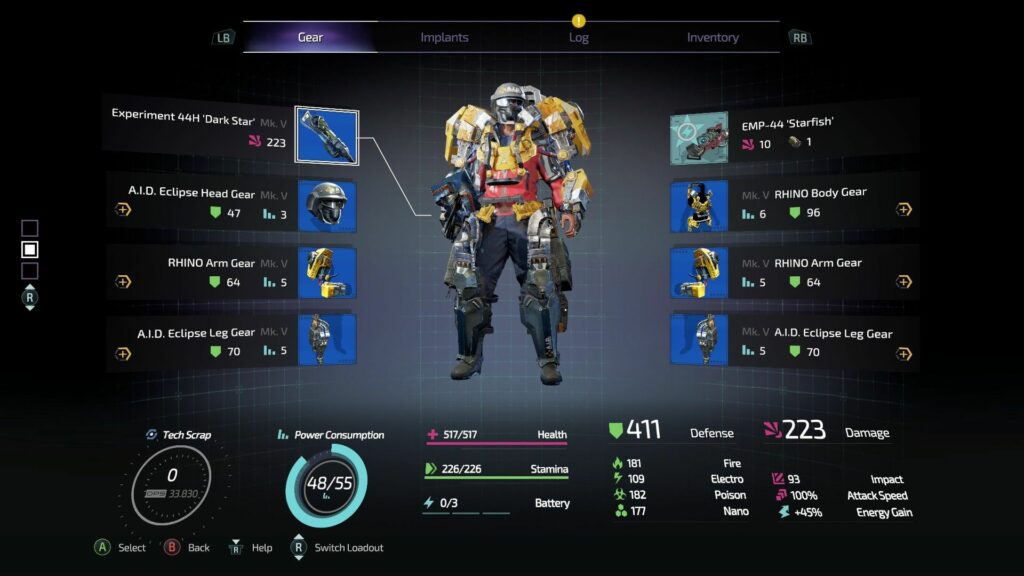 With the story being told via NPCs and recordings that can be picked up, and the game allowing you to explore areas in any order, the story can become disjointed if you wander into an area and get plot details out of order.  When the dust settles on Surge 2, the general feeling was that the incentive of gathering stronger loot is more than what progressing the story was.  This is not a negative point but it is something to be aware of if you are looking for a more story-driven RPG.

Surge 2 does not reinvent the wheel when it comes to Souls-like titles, but that is not what it was trying to do from the start.  What is does do well is the basics, it ticks the boxes.  At times it feels like that is all it wanted to achieve and that it’s happy with being mediocre.  Then you get into the combat and the spectacular upgrade system, not to mention the way it makes use of a parry system that really gives the combat system life.  Surge 2 might not be a replacement game for the hardcore Souls fans, but it is definitely worth the time and hours that you will invest in it.  If you were a fan of the first game then it is a no-brainer, you will love it.

Surge 2 is a good game, will it be placed along with greats like Dark Souls or Bloodborne, probably not,  is it the best of the rest, most definitely!

Special thanks to Apex Interactive for providing the review content