Gaming keyboards certainly have evolved since their inception.  At first, they became a normal office keyboard that had some futuristic design and featured a few lights or a few oddly-placed keys.  This was, at the time the standard, within a short space of time the gaming keyboard saw many massive leaps and bounds in advancement, be that media keys, special keycaps, RGB that can be customized, and finally came the inception of new key switches.  Mechanical keys are still widely used in their rainbow of colours ranging from clicky, linear and tactile variants.

Soon after the idea of getting rid of the, mostly unused by gamers, Numpad, saw a new Tenkeyless (TKL) keyboards flood the market…  So Asus decided to take all that has made gaming keyboards good in recent times, and simply make them GREAT!

The Asus ROG Claymore 2 is a full-sized wireless keyboard that features macros, media keys as well as an armrest, at first glance…  The Claymore 2 is a beautifully crafted black keyboard that’s faceplate is made from brushed dark metal.  The full black-on-black design fits perfectly into any setup and the detachable armrest shows that the Claymore 2 is built with comfort in mind.  While comfort is definitely extremely high up on the requirements for this premium keyboard, the feature that Asus is striving for with the Claymore 2 is versatility!  The Asus ROG Claymore 2 allows you to customize YOUR keyboard the way YOU want to use it.  The detachable Numpad can be switched from the right side, or the left side, or if you feeling all “gamey” you can simply remove it for a true 80% keyboard experience.

As if all of the above was not enough, put the finishing touches on your masterpiece with Aura Sync which will allow for all Asus products (and other brands that support Aura Sync) to seamlessly integrate RGB sync across all devices. 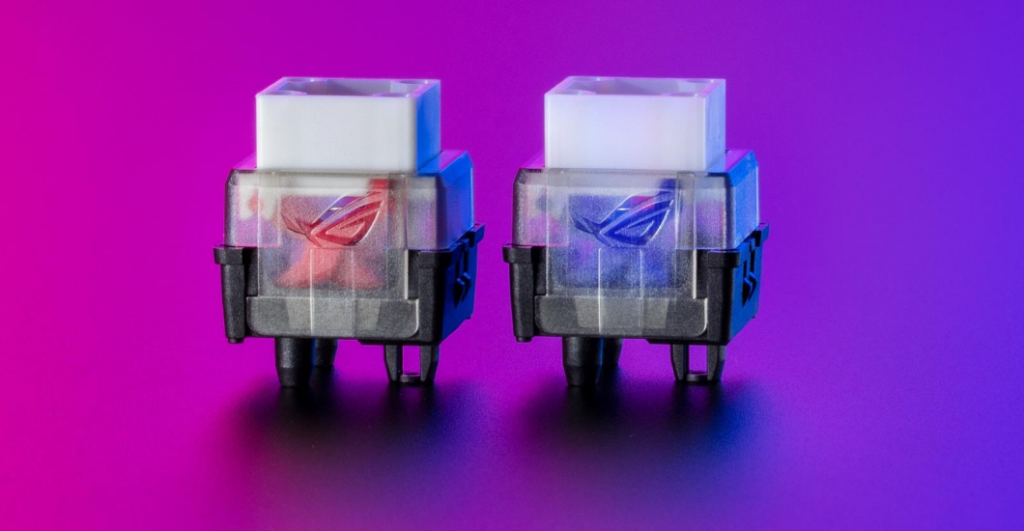 Mechanical, as well as optical switches, are constantly evolving and therefore many brands decide to use the same switches as other brands just for simplicity.  The bigger brands tend to take those designs and break them down and build their own, this is what Asus did.  Introducing the ROG RX optical-mechanical switches.  When the ROG RX switches were first announced, many people discussed how similar the personal design of one of the other major competitors was.  Asus was very quick to denounce this and assure us that the ROG RX switches are completely reinvented from the base up as well as when it comes to actuation force and design. 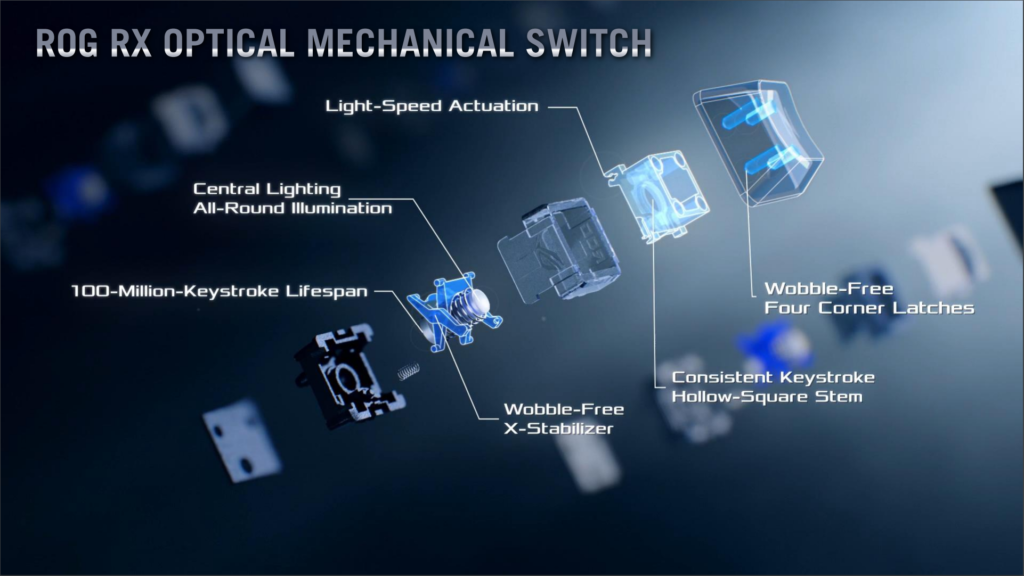 When I received the Claymore 2 Asus did advise that I should use the keyboard for some time just to get used to the feel before passing judgment. From the moment I tapped the first key, I was instantly in love!  The ROG RX Red switch is their Linear and swift switch that allows for the utmost precision and super-fast response time due to the optical triggers.  The red linear switches only need to travel 1.5mm for the switch signal to be made and at an initial weight of 40g needed to press the key, it lays perfectly in the space of being a feather-light switch that will prevent accidental triggers by running your fingers over the keys.  To avoid the dreaded double trigger Asus has also set a 10ms break in triggering. 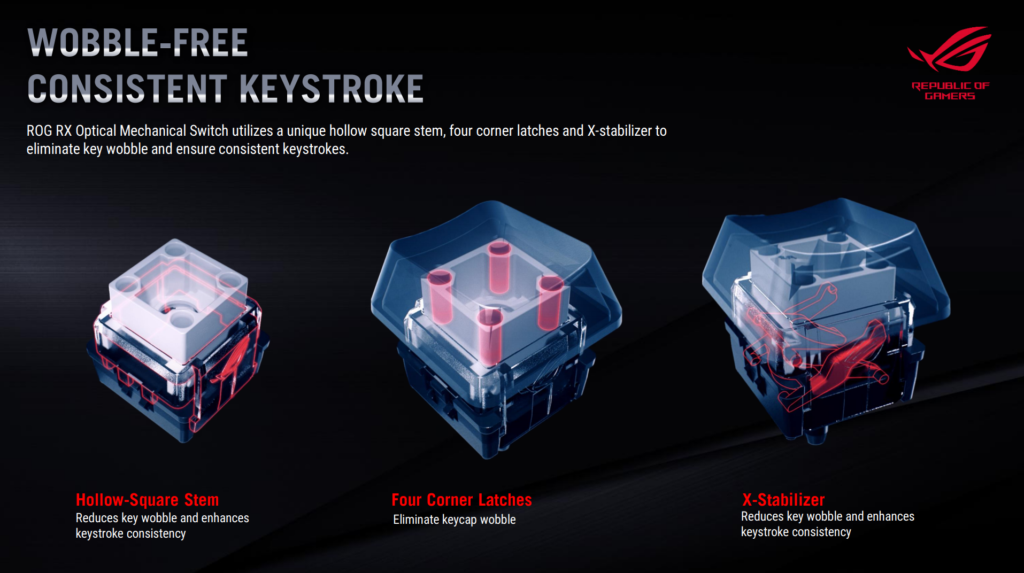 For those who want less technical speak, the ROG RX switches feel like typing on clouds, the keystrokes feel extremely light while still feeling true and creating confidence in your strokes, this is due to the wobble-free design that Asus has employed.  The Red Linear and Swift keys also allow for a mechanical feel, with the accuracy and response of optical while not sounding like teeth chattering away like some of the other brands of keys strive to achieve.  The Red Asus keys were an instant sell to my wife she said that me working or gaming no longer sounded like I was banging on a typewriter.  Thank you Asus, happy wife happy life 🙂

The Asus ROG Claymore 2 has a plethora of features crammed into its metal frame.  Apart from the most obvious features such as the 2.4GHz wireless and the wonderful RX switches, the Claymore 2 embodies the word versatility like none before.  In its full kit, the Claymore 2 comes across as your run-of-the-mill keyboard with the Numpad on the right and wrist rest attached.  Simply taking the wrist rest away leaves you with a perfect 100% keyboard, ready to take on anything.  Switching the Numpad to the left side has you ready and set to have all your macros at the tip of your left hand.  Unclipping the Numpad will leave you with a formidable 80% TKL keyboard ready to jump into any battle with you.

When playing MOBO and other such games having your abilities equipped somewhere that they are easily and quickly reached could be the key between winning and losing.  The Numpad on the Claymore 2 is equipped with 4 dedicated macro keys that can be assigned to whatever your need may be.  But if you were to need even more macros, Asus has got you covered.  The whole Numpad can be assigned to be a macro pad which when slotted to the left of the keyboard will make nearly any enemy tremble at the sight of your majestic ability pad! 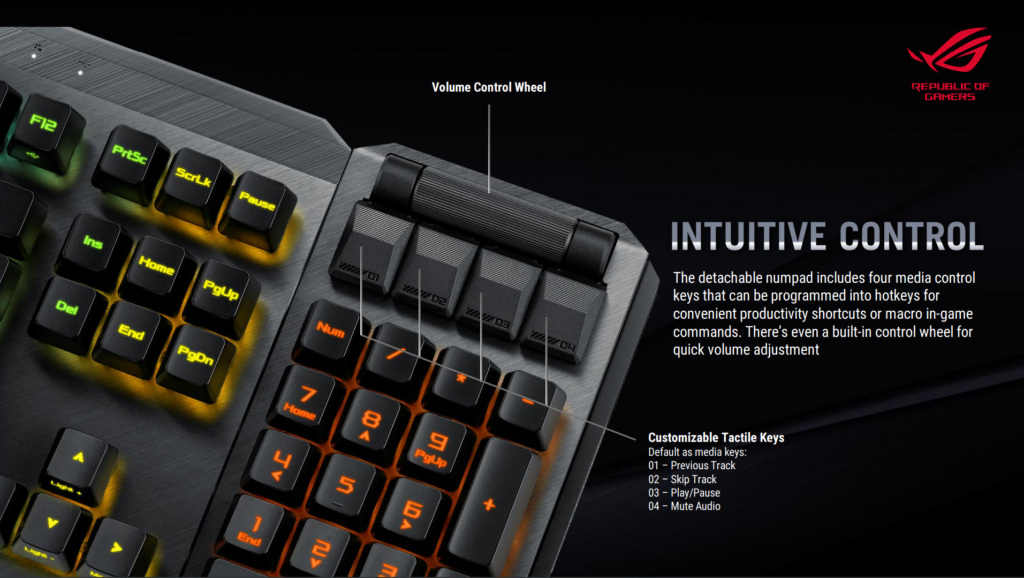 The more features crammed into a device the more the power consumption, and naturally, as the Claymore 2 is wireless it is only natural to be worried that battery life might be a problem.  Once again Asus has thought of everything and they fitted the Claymore 2 with a 4000mAh battery that is capable of delivering 47 hours of nonstop gaming even with RGB turned on.  During my time using the Claymore 2, I admittedly had the RGB on static, with brightness set to 75%, but I comfortably cruised past the 47-hour mark with around 20% battery life left in the tank.  Asus reckons that with the RGB turned off the Claymore 2 is capable of grinding out 144 hours of battery life on a single charge.  That is phenomenal!

If you were to find yourself running out of battery life Asus has built a fast charge function into the Claymore 2.  Simply connect it via the USB-C connector to your USB-C port on your PC, toggle on the fast-charge feature by using FN+F12, and within 30min of charging you will be able to get a solid 18 hours of use from it ( with RGB turned off). 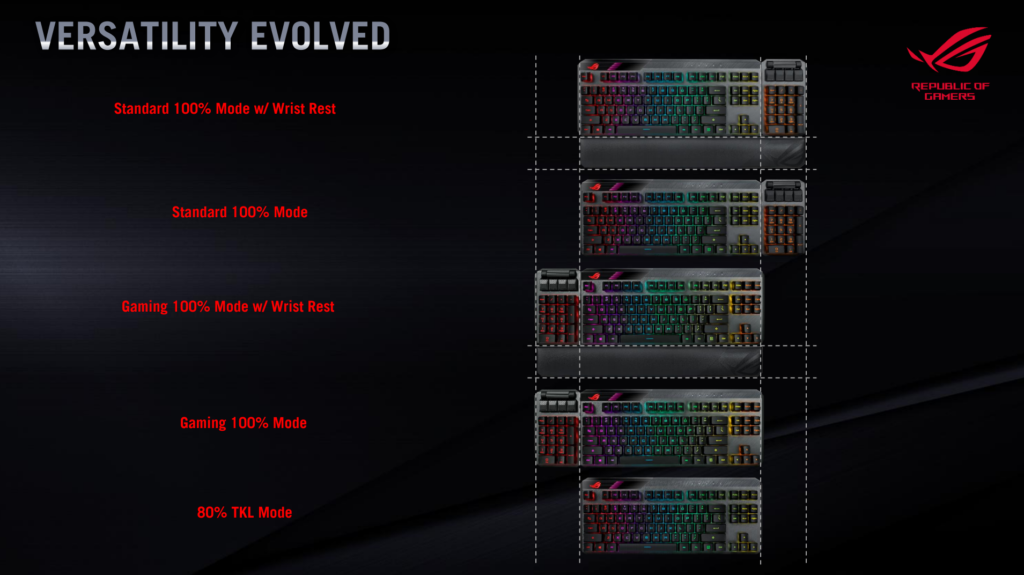 The Claymore 2 has so many nifty tricks up its sleeve that I could easily just keep going on about the USB passthrough that is found on the front of the keyboard.  Or the onboard profiles that you can assign to the keyboard even when you are not connected to the armory crate.  The vast amount of RGB lighting modes can be chopped and changed as easily as flicking between keys, not to mention the personal lighting effects you can create to complement your setup with the help of wireless Aura Sync!

When the Asus Claymore 2 arrived on my desk I did not quite realize what I was in for.  The Claymore 2 starts off by doing the basics well, REALLY well!   Asus has made an exceptional switch in the RX optical-mechanical switch and personally, I am truly in love with the linear swift red switches.  The feeling when typing, as well as gaming, is something I have never experienced before through all of my review keyboards as well as my daily keyboards.  After spending countless hours hammering out many written pieces as well as a fair amount of excel work all mixed together with amounts of gaming I would rather not disclose, I can in full honesty say that these switches take the effort out of striking keys!

Seeing as the Asus ROG Claymore 2 does the basics right, it is now time to deep dive and see if there is really anything wrong with this piece of genius.  It is a keyboard that caters to literally everyone except the diehard 60%’ers and that is okay because the Claymore 2 can literally do ANYTHING that could be asked of a keyboard, and more!  As I have mentioned in the review the features are endless and they all work tremendously well, so it is extremely tough to fault a perfect keyboard.  The only change I would make, and this is truly looking for something to fault, is that in future versions the Numpad can be used without being connected to the main keyboard.  This opens it up to be used by streamers as a possible stream deck etc.

*all images courtesy of Asus